Quantitative Modeling of Climate Change Impacts on Mycotoxins in Cereals: A Review
Previous Article in Journal

Effect of Temperature, Water Activity and Carbon Dioxide on Fungal Growth and Mycotoxin Production of Acclimatised Isolates of Fusarium verticillioides and F. graminearum

To investigate into the T-2 and HT-2 toxin occurrence, 240 samples of unprocessed cereals (maize, wheat, barley, and oats) were sampled from different fields located in three Croatian regions during 2017–2018. In all samples, sum concentrations of T-2/HT-2 toxin were determined using the ELISA method, while the LC-MS/MS was used as a confirmatory method for both mycotoxins in positive samples (>LOD) and the establishment of T-2 over HT-2 toxin ratios. The results showed oats to be the most contaminated cereal, with T-2/HT-2 toxins detected in 70.0% of samples, followed by barley (40.9%), maize (26.8%) and wheat (19.2%), with the mean T-2/HT-2 ratio ranging from 1:2.7 in maize to 1:4.4 in oats. Sum T-2/HT-2 concentrations in two maize samples were higher than the indicative level recommended by the European Commission, necessitating subsequent investigations into the conditions under which these poorly investigated mycotoxins are produced. Statistically significantly (p < 0.05) higher concentrations of T-2/HT-2 toxin were determined in oats throughout study regions as compared to those found in wheat, but not maize and barley, while the concentrations of these mycotoxins were related to the regional weather in Croatia. View Full-Text
Keywords: Fusarium mycotoxins; T-2 toxin; HT-2 toxin; Weather; Occurrence; LC-MS/MS Fusarium mycotoxins; T-2 toxin; HT-2 toxin; Weather; Occurrence; LC-MS/MS
►▼ Show Figures 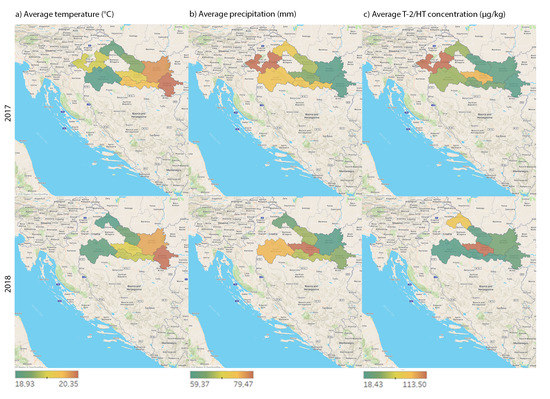