Evaluation of the Effectiveness of Crotoxin as an Antiseptic against Candida spp. Biofilms

Dihydrodinophysistoxin-1 Produced by Dinophysis norvegica in the Gulf of Maine, USA and Its Accumulation in Shellfish

Dihydrodinophysistoxin-1 (dihydro-DTX1, (M-H)−m/z 819.5), described previously from a marine sponge but never identified as to its biological source or described in shellfish, was detected in multiple species of commercial shellfish collected from the central coast of the Gulf of Maine, USA in 2016 and in 2018 during blooms of the dinoflagellate Dinophysis norvegica. Toxin screening by protein phosphatase inhibition (PPIA) first detected the presence of diarrhetic shellfish poisoning-like bioactivity; however, confirmatory analysis using liquid chromatography-tandem mass spectrometry (LC-MS/MS) failed to detect okadaic acid (OA, (M-H)−m/z 803.5), dinophysistoxin-1 (DTX1, (M-H)−m/z 817.5), or dinophysistoxin-2 (DTX2, (M-H)−m/z 803.5) in samples collected during the bloom. Bioactivity-guided fractionation followed by liquid chromatography-high resolution mass spectrometry (LC-HRMS) tentatively identified dihydro-DTX1 in the PPIA active fraction. LC-MS/MS measurements showed an absence of OA, DTX1, and DTX2, but confirmed the presence of dihydro-DTX1 in shellfish during blooms of D. norvegica in both years, with results correlating well with PPIA testing. Two laboratory cultures of D. norvegica isolated from the 2018 bloom were found to produce dihydro-DTX1 as the sole DSP toxin, confirming the source of this compound in shellfish. Estimated concentrations of dihydro-DTX1 were >0.16 ppm in multiple shellfish species (max. 1.1 ppm) during the blooms in 2016 and 2018. Assuming an equivalent potency and molar response to DTX1, the authority initiated precautionary shellfish harvesting closures in both years. To date, no illnesses have been associated with the presence of dihydro-DTX1 in shellfish in the Gulf of Maine region and studies are underway to determine the potency of this new toxin relative to the currently regulated DSP toxins in order to develop appropriate management guidance. View Full-Text
Keywords: diarrhetic shellfish poisoning; dihydro-DTX1; Dinophysis norvegica; Gulf of Maine USA diarrhetic shellfish poisoning; dihydro-DTX1; Dinophysis norvegica; Gulf of Maine USA
►▼ Show Figures 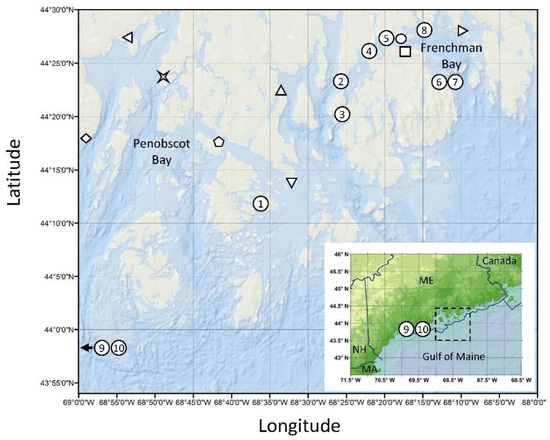