2.1. Working Model of CKD Mouse with AAN and Identification of Renal Function and Uremic Cachexia

To mimic the typical findings of advanced CKD in humans, we developed an experimental mouse model with AAN (Figure 1A). Under the circumstances of uremic inflammation, uremic cachexia highly prevalent among CKD patients is featured with anorexia, increased energy expenditure and decreased body weight (BW) and protein stores [17]. To identify the renal function of AAN mice, a series of correlation tests were analyzed. The scatter diagram illustrated positive correlations between plasma concentrations of BUN, PCS, IS and Cr were robust (Figure 1B), indicating that renal dysfunction led to the accumulation of various uremic toxins in the circulation. Plasma Cr negatively correlated with urine urea nitrogen (UUN) and urine creatinine (UCr), indicating that impaired urinary excretion of waste products due to CKD (Figure 1B). Our data revealed BW negatively correlated with BUN, Cr and uremic toxins, indicative of uremic cachexia (Figure 1C). Interestingly, there findings were compatible with previous studies that a significant inverse association between plasma uremic toxins and skeletal muscle mass in clinical observation and basic research [18].

Corresponding to the findings in Figure 1C, uremic mice with AAI treatment had a significant decrease in BW through the experimental period (Figure 2A). Compared with AAI-treated groups, mice not receiving AAI showed a steady increase in BW. Furthermore, an atrophic kidney due to fibrosis is characterized by shrinkage to an abnormal size and weight. TIF is a key feature and common outcome of inflammation across all kinds of advanced CKD [19]. Our data demonstrated that the size and weight in kidneys of AAN mice were lower than those without AAI treatment, indicative of renal atrophy. Although AAN group exhibited the smallest kidney size and mass than the other groups, PE treatment ameliorated such renal atrophy in AAN-PE group (Figure 2B,C). In the histopathological evaluation of H&E stain, renal tubular cells in AAN group exhibited the most prominent cytoplasmic vacuolation, loss of cell-cell adhesion, apical-basal polarity, thinning/attenuation of the epithelial layer lining tubules and irreversible cellular change with eventual cell loss and shedding into tubular lumina (Figure 2D). Vacuoles lacked uniformity of size or discrete outlines within tubules. Recent evidence unveils that cytoplasmic vacuolation is the necrotic nature of proximal tubular epithelial cells in response to renal injuries [20]. Remarkable tubular atrophy, glomerular obsolescence and shrunken, scarred kidneys in AAN models were compatible with hallmarks of ESKD in humans. Above findings of renal damages were in accordance with previous studies [21] and typical manifestations in advanced CKD [22]. Fibrosis and fibrous replacement are the eventual sequelae of CKD, regardless of cause. Although PE treatment reversed progressive TIF in advanced CKD, further investigations of the therapeutic effects on renal function and uremic burden were required.

To mimic TIF in humans with progressive CKD, we developed an AAN model using seven-week-old C57BL/6 mice by intraperitoneal (IP) injection of aristolochic acid I (AAI, Sigma Aldrich, Wuxi, China) 3 mg/kg once every 3 days for 6 weeks. The details of the study protocol and materials for AAN were also mentioned previously [8]. All animals were randomly divided into four groups of six mice each: vehicle-treated control group (normal renal function), PE-treated group (normal renal function), AAN group and PE-treated AAN group. PE was collected in Taiwan using propolis collectors as described previously [12]. The dosage and experimental administration were presented here: Group I (control; IP injection of vehicle (DMSO, Sigma Aldrich, China) once every 3 days for 6 weeks and orally administered with vehicle (distilled water, 200 μL) everyday, 12 weeks; n = 6). Group II (PE alone; IP injection of vehicle and orally administered with PE (0.2 mg/kg in 200 μL vehicle), 12 weeks; n = 6). Group III (AAI treatment; IP injection of AAI and orally administered with vehicle (200 μL) everyday, 12 weeks; n = 6) and Group IV (PE + AAI treatment; IP injection of AAI and orally administered with PE, 12 weeks; n = 6). All mice were maintained at temperature (23 ± 3 °C) and relative humidity (40–60%) on a 12 h light/dark cycle and allowed free access to standard rodent chow and tap water. Animal experiments were handled according to the guidelines of the Institutional Animal Care and Use Committee of the National Ilan University (approval number: 107-17; date: 16 December 2018) and NIH Guides for the Care and Use of Laboratory Mouse body weight was measured at least once a week throughout the 12 weeks. Kidneys were removed at termination and directly compared.

Mice were anaesthetized via the inhalation of isoflurane and euthanized by cervical dislocation. Kidneys were removed and fixed in 10% formalin. Specimens were embedded in paraffin and sliced into 2–3 μm in thickness. Subsequently, the kidney tissues were stained with Hematoxylin-eosin (H&E stain). The images were captured using a Nikon Digital Camera Microscope (Nikon, Tokyo, Japan).

Masson’s trichrome staining method was used to determine the extent of collagen deposition and fibrosis in mouse kidney tissues. In the corresponding area, H&E staining of the adjacent paraffin section was performed for comparisons of tissue morphology. The experiments were conducted as follows: sections were first deparaffinized and rehydrated in ethanol/water solutions then post-fixed with Bouin’s solution for 1 h at room temperature. The fixation buffer was removed, and slides were stained with iron hematoxylin, Biebrich scarlet-acid fuchsin, and phosphomolybdic-phosphotungstic acid sequentially for 10 min per stain. Slides were then stained with Aniline blue. Finally, slides were washed in 10% acetate solution for 3–5 min and mounted in the mounting medium for observations to be made. The slices were visualized by an Olympus BX-41 microscope.

4.4. Biochemical Assays of Urea nitrogen, Creatinine (Cr), PCS and IS

All data are expressed as the mean ± SEM using the GraphPad Prism Program (GraphPad, San Diego, CA, USA) or SPSS version 22.0 (IBM, Armonk, NY, USA). Spearman’s test with linear regression analysis was used for correlation data. Quantitative data were analyzed with Kruskal and Wallis test. A p-value < 0.05 was considered statistically significant for each of the experiments.

J.-F.C., C.-Y.H. and J.-C.L. were responsible for the study design, data interpretation, manuscript writing and draft. C.-Y.H. and S.-S.L. assisted with digital analysis for immunohistochemistry staining and uremic toxin analysis. Y.-W.C. assisted the extraction of propolis. C.-C.L., C.-F.H., J.-F.C., K.-C.L., J.-C.L. and M.-S.W. were responsible for study supervision and revision of the manuscript. All authors have read and agreed to the published version of the manuscript. 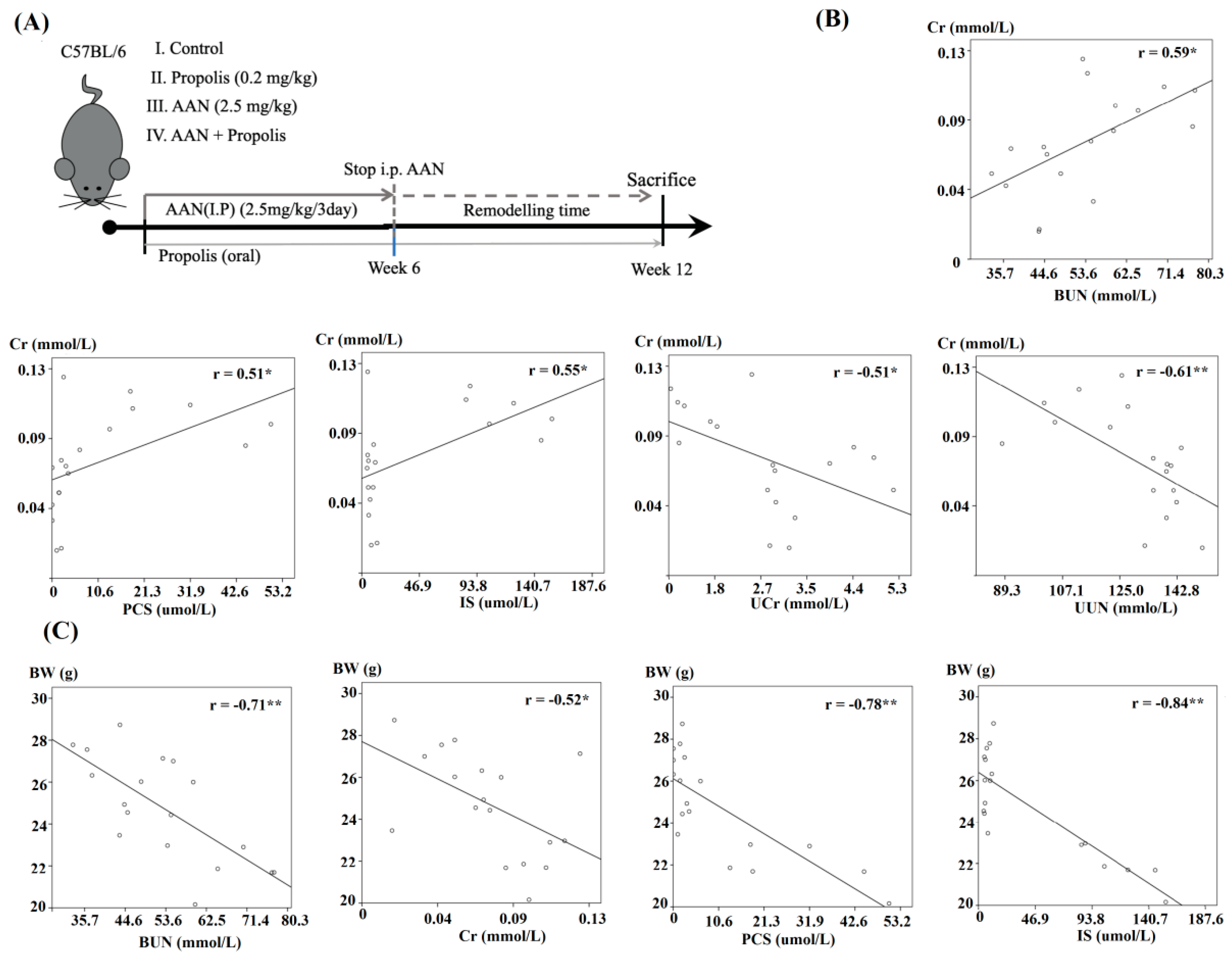 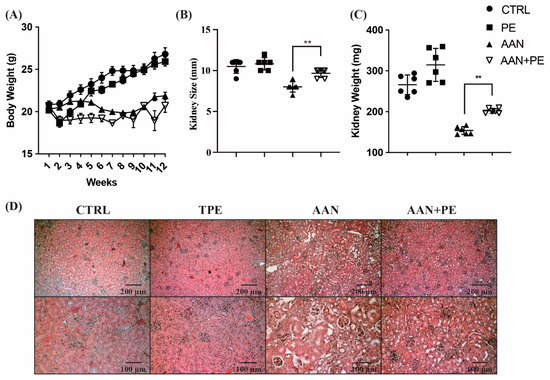 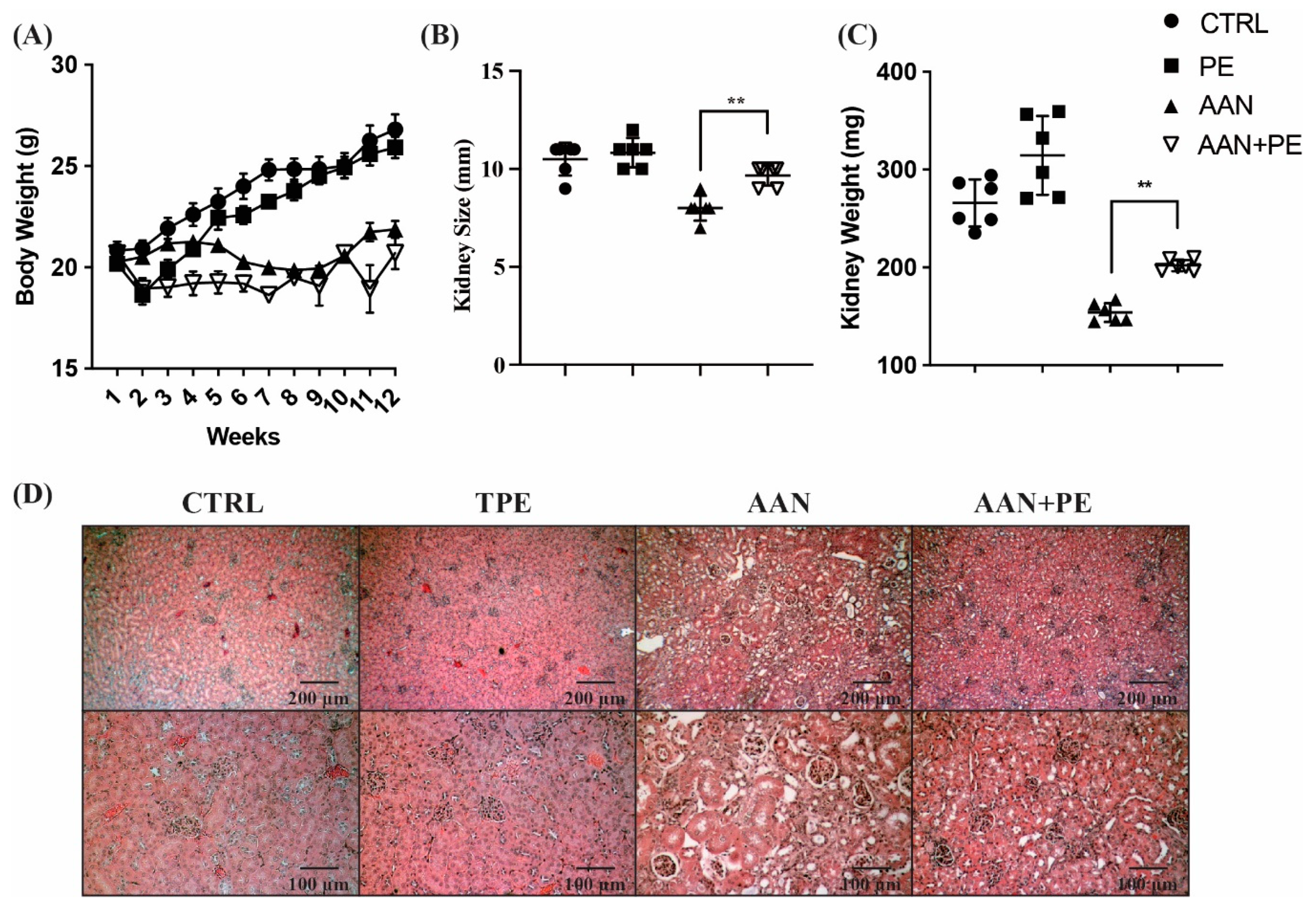 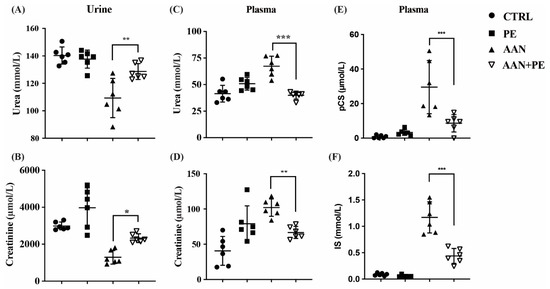