This study was conducted to investigate human exposure to 19 compounds (mycotoxins and their metabolites) in plasma samples from healthy adults (n = 438, aged 19–68 years) from Navarra, a region of northern Spain. Samples were analyzed by LC-MS/MS, before and after enzymatic hydrolysis for the detection of possible glucuronides and/or sulfates (Phase II metabolites). The most prevalent mycotoxin was ochratoxin A (OTA), with an incidence of 97.3%. Positive samples were in the concentration range of 0.4 ng/mL to 45.7 ng/mL. After enzymatic treatment, OTA levels increased in a percentage of individuals, which may indicate the presence of OTA-conjugates. Regarding ochratoxin B, it has also been detected (10% of the samples), and its presence may be related to human metabolism of OTA. Sterigmatocystin was detected with a high incidence (85.8%), but only after enzymatic hydrolysis, supporting glucuronidation as a pathway of its metabolism in humans. None of the other studied mycotoxins (aflatoxins B1, B2, G1, G2 and M1; T-2 and HT-2 toxins; deoxynivalenol, deepoxy-deoxynivalenol, 3-acetyldeoxynivalenol, 15-acetyldeoxynivalenol; zearalenone; nivalenol; fusarenon-X; neosolaniol; and diacetoxyscirpenol) were detected in any of the samples, neither before nor after enzymatic treatment. To the best of our knowledge, this is the first report carried out in Spain to determine the exposure of the population to mycotoxins and some of their metabolites using plasma, and the obtained results justify the need for human biomonitoring and metabolism studies on mycotoxins. View Full-Text
Keywords: human plasma; human biomonitoring; mycotoxins; ochratoxin A; ochratoxin B; sterigmatocistyn human plasma; human biomonitoring; mycotoxins; ochratoxin A; ochratoxin B; sterigmatocistyn
►▼ Show Figures 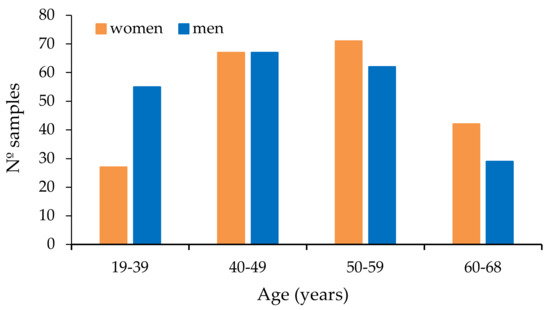