Harmful Effects and Control Strategies of Aflatoxin B1 Produced by Aspergillus flavus and Aspergillus parasiticus Strains on Poultry: Review
Previous Article in Journal

Aflatoxins are carcinogenic to humans and deoxynivalenol causes digestive disorders, and both mycotoxins occur frequently in cereal-based foods. The purpose of this study was to investigate the occurrence and levels of aflatoxins (B1, B2, G1 and G2) and deoxynivalenol (DON) in cereal-based baby foods as well as to calculate the estimated daily intakes (EDI) in different stages of infancy. Sixty samples of infant cereals (wheat-, corn-, rice-, oat-, and mixed grain-based) were collected during a 2-year period and analyzed by validated methods. Aflatoxins were detected in 12 samples (20%), six of which exceeded the EU maximum level for aflatoxin B1 set at 0.10 µg/kg. Deoxynivalenol appeared in 20% of baby food samples, with one sample exceeding the EU maximum level established at 200 µg/kg. There were no significant differences between gluten-free products for babies aged 4–6 months and multi-cereal products for infants aged 7–12 months, nor between whole-grain-based and refined ingredients. However, baby food products of organic origin showed significantly higher levels of deoxynivalenol than conventional ones (p < 0.05). It is proposed for the health protection of infants and young children, a vulnerable group, to establish the lowest maximum level for the sum of aflatoxins (B1, B2, G1 and G2) in baby food. View Full-Text
Keywords: mycotoxins; aflatoxins; deoxynivalenol; infant cereals; baby food; maximum levels mycotoxins; aflatoxins; deoxynivalenol; infant cereals; baby food; maximum levels
►▼ Show Figures 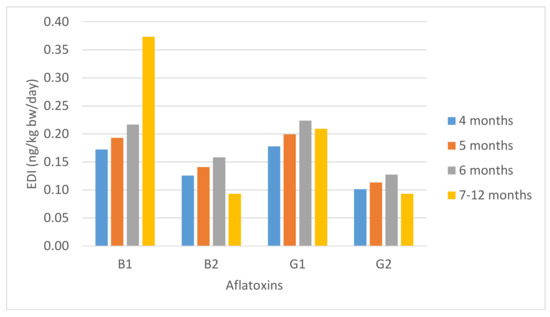