Biocontrol of Aspergillus and Fusarium Mycotoxins in Africa: Benefits and Limitations
Next Article in Special Issue

Human accidents with spiders of the genus Loxosceles are an important health problem affecting thousands of people worldwide. Patients evolve to severe local injuries and, in many cases, to systemic disturbances as acute renal failure, in which cases antivenoms are considered to be the most effective treatment. However, for antivenom production, the extraction of the venom used in the immunization process is laborious and the yield is very low. Thus, many groups have been exploring the use of recombinant Loxosceles toxins, particularly phospholipases D (PLDs), to produce the antivenom. Nonetheless, some important venom activities are not neutralized by anti-PLD antibodies. Astacin-like metalloproteases (ALMPs) are the second most expressed toxin acting on the extracellular matrix, indicating the importance of its inclusion in the antigen’s formulation to provide a better antivenom. Here we show the construction of a hybrid recombinant immunogen, called LgRec1ALP1, composed of hydrophilic regions of the PLD and the ALMP toxins from Loxosceles gaucho. Although the LgRec1ALP1 was expressed as inclusion bodies, it resulted in good yields and it was effective to produce neutralizing antibodies in mice. The antiserum neutralized fibrinogenolytic, platelet aggregation and dermonecrotic activities elicited by L. gaucho, L. laeta, and L. intermedia venoms, indicating that the hybrid recombinant antigen may be a valuable source for the production of protective antibodies against Loxosceles ssp. venoms. In addition, the hybrid recombinant toxin approach may enrich and expand the alternative antigens for antisera production for other venoms. View Full-Text
Keywords: phospholipases D; metalloproteases; Loxosceles spp.; recombinant toxins; hybrid immunogen; neutralizing antibodies; antivenoms phospholipases D; metalloproteases; Loxosceles spp.; recombinant toxins; hybrid immunogen; neutralizing antibodies; antivenoms
►▼ Show Figures 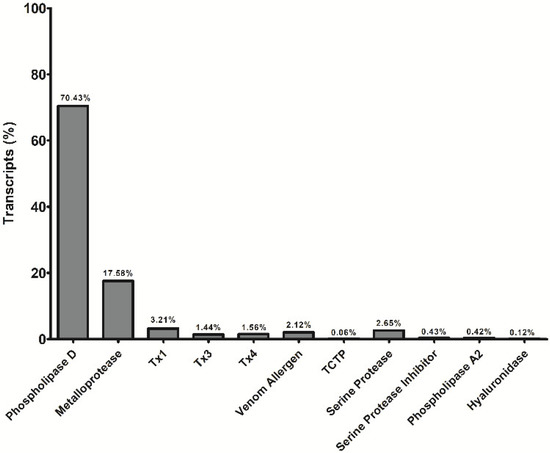