Occurrence and Ear Damage of Helicoverpa zea on Transgenic Bacillus thuringiensis Maize in the Field in Texas, U.S. and Its Susceptibility to Vip3A Protein

The corn earworm, Helicoverpa zea (Boddie), is a major pest of Bacillus thuringiensis (Bt) maize and cotton in the U.S. Reduced efficacy of Bt plants expressing Cry1 and Cry2 against H. zea has been reported in some areas of the U.S. In this study, we evaluated the occurrence and ear damage of H. zea on transgenic Bt maize expressing Cry proteins or a combination of Vip3A and Cry proteins in the field in Texas in 2018. We found that the occurrence of H. zea larvae and the viable kernel damage area on the ear were not different between non-Bt maize and Bt maize expressing Cry1A.105+Cry2Ab2 and Cry1Ab+Cry1F proteins. A total of 67.5% of the pyramided Bt maize expressing Cry1Ab+Cry1F+Vip3A was damaged by 2nd–4th instar larvae of H. zea. Diet bioassays showed that the resistance ratio against Vip3Aa51 for H. zea obtained from Cry1Ab+Cry1F+Vip3A maize was 20.4 compared to a field population collected from Cry1F+Cry1A.105+Cry2Ab2 maize. Leaf tissue bioassays showed that 7-day survivorship on WideStrike3 (Cry1F+Cry1Ac+Vip3A) cotton leaves was significantly higher for the H. zea population collected from Cry1Ab+Cry1F+Vip3A maize than for a Bt-susceptible laboratory population. The results generated from this study suggest that H. zea has evolved practical resistance to Cry1 and Cry2 proteins. Therefore, it is crucial to ensure the sustainable use of the Vip3A technology in Bt maize and cotton. View Full-Text
Keywords: Transgenic crops; Bacillus thuringiensis; Helicoverpa zea; Resistance; Vip3A; Bt Maize Transgenic crops; Bacillus thuringiensis; Helicoverpa zea; Resistance; Vip3A; Bt Maize
►▼ Show Figures 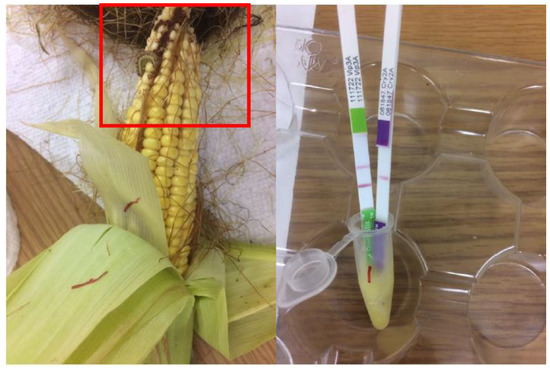