Multiple Mycotoxins Determination in Food by LC-MS/MS: An International Collaborative Study
Next Article in Special Issue

Structure–Function Relationships of the Repeat Domains of RTX Toxins

RTX proteins are a large family of polypeptides of mainly Gram-negative origin that are secreted into the extracellular medium by a type I secretion system featuring a non-cleavable C-terminal secretion signal, which is preceded by a variable number of nine-residue tandem repeats. The three-dimensional structure forms a parallel β-roll, where β-strands of two parallel sheets are connected by calcium-binding linkers in such a way that a right-handed spiral is built. The Ca2+ ions are an integral part of the structure, which cannot form without them. The structural determinants of this unique architecture will be reviewed with its conservations and variations together with the implication for secretion and folding of these proteins. The general purpose of the RTX domains appears to act as an internal chaperone that keeps the polypeptide unfolded in the calcium-deprived cytosol and triggers folding in the calcium-rich extracellular medium. A rather recent addition to the structural biology of the RTX toxin is a variant occurring in a large RTX adhesin, where this non-canonical β-roll binds to ice and diatoms. View Full-Text
Keywords: RTX toxin; type I secretion; calcium; internal chaperone; protein folding; tertiary structure RTX toxin; type I secretion; calcium; internal chaperone; protein folding; tertiary structure
►▼ Show Figures 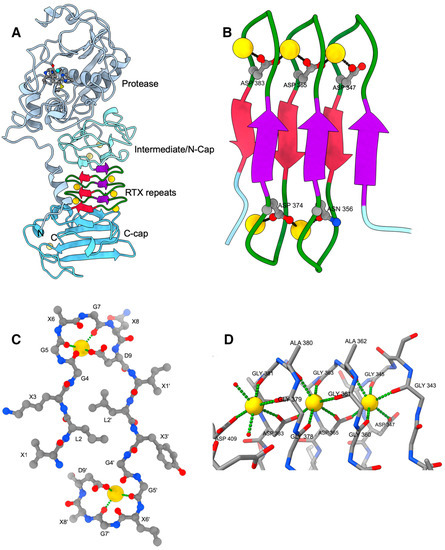 Baumann, U. Structure–Function Relationships of the Repeat Domains of RTX Toxins. Toxins 2019, 11, 657.