John A. Chaddock
1 and

Botulinum neurotoxins (BoNTs) are highly successful protein therapeutics. Over 40 naturally occurring BoNTs have been described thus far and, of those, only 2 are commercially available for clinical use. Different members of the BoNT family present different biological properties but share a similar multi-domain structure at the molecular level. In nature, BoNTs are encoded by DNA in producing clostridial bacteria and, as such, are amenable to recombinant production through insertion of the coding DNA into other bacterial species. This, in turn, creates possibilities for protein engineering. Here, we review the production of BoNTs by the natural host and also recombinant production approaches utilised in the field. Applications of recombinant BoNT-production include the generation of BoNT-derived domain fragments, the creation of novel BoNTs with improved performance and enhanced therapeutic potential, as well as the advancement of BoNT vaccines. In this article, we discuss site directed mutagenesis, used to affect the biological properties of BoNTs, including approaches to alter their binding to neurons and to alter the specificity and kinetics of substrate cleavage. We also discuss the target secretion inhibitor (TSI) platform, in which the neuronal binding domain of BoNTs is substituted with an alternative cellular ligand to re-target the toxins to non-neuronal systems. Understanding and harnessing the potential of the biological diversity of natural BoNTs, together with the ability to engineer novel mutations and further changes to the protein structure, will provide the basis for increasing the scope of future BoNT-based therapeutics. View Full-Text
Keywords: recombinant; target secretion inhibitors; rational design; receptors; enzyme recombinant; target secretion inhibitors; rational design; receptors; enzyme
►▼ Show Figures 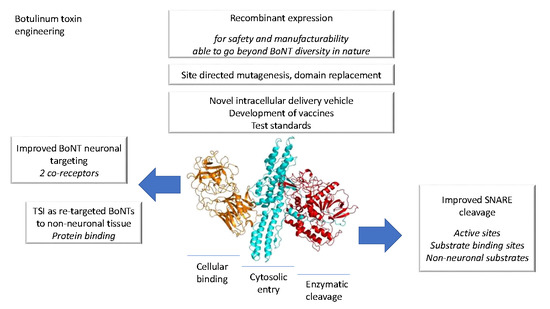