Scaling-Up the Impact of Aflatoxin Research in Africa. The Role of Social Sciences
Previous Article in Journal

Phenotypic diversity generated through altered gene expression is a primary mechanism facilitating evolutionary response in natural systems. By linking the phenotype to genotype through transcriptomics, it is possible to determine what changes are occurring at the molecular level. High phenotypic diversity has been documented in rattlesnake venom, which is under strong selection due to its role in prey acquisition and defense. Rattlesnake venom can be characterized by the presence (Type A) or absence (Type B) of a type of neurotoxic phospholipase A (PLA), such as Mojave toxin, that increases venom toxicity. Mojave rattlesnakes (Crotalus scutulatus), represent this diversity as both venom types are found within this species and within a single panmictic population in the Sonoran Desert. We used comparative venom gland transcriptomics of nine specimens of C. scutulatus from this region to test whether expression differences explain diversity within and between venom types. Type A individuals expressed significantly fewer toxins than Type B individuals owing to the diversity of C-type lectins (CTLs) and snake venom metalloproteinases (SVMPs) found in Type B animals. As expected, both subunits of Mojave toxin were exclusively found in Type A individuals but we found high diversity in four additional PLAs that was not associated with a venom type. Myotoxin a expression and toxin number variation was not associated with venom type, and myotoxin a had the highest range of expression of any toxin class. Our study represents the most comprehensive transcriptomic profile of the venom type dichotomy in rattlesnakes and C. scutulatus. Even intra-specifically, Mojave rattlesnakes showcase the diversity of snake venoms and illustrate that variation within venom types blurs the distinction of the venom dichotomy. View Full-Text
Keywords: C-type lectins; hemorrhagic; Mojave toxin; myotoxin a; neurotoxic; phospholipase A2; RNA-seq; snake venom metalloproteinases C-type lectins; hemorrhagic; Mojave toxin; myotoxin a; neurotoxic; phospholipase A2; RNA-seq; snake venom metalloproteinases
►▼ Show Figures 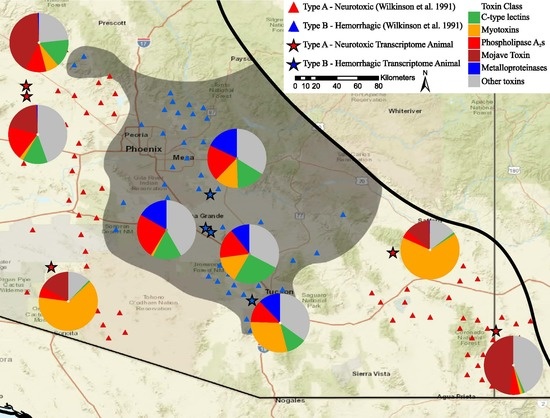