The environmental neurotoxin β-N-Methylamino-l-alanine (BMAA) has been pointed out to be involved in human neurodegenerative diseases. This molecule is known to be bioaccumulated by bivalves. However, little data about its toxic effects on freshwater mussels is available, particularly on the hemolymphatic compartment and its hemocyte cells involved in various physiological processes such as immune defenses, digestion and excretion, tissue repair, and shell production. Here we exposed Dreissena polymorpha to dissolved BMAA, at the environmental concentration of 7.5 µg of /mussel/3 days, during 21 days followed by 14 days of depuration in clear water, with the objective of assessing the BMAA presence in the hemolymphatic compartment, as well as the impact of the hemocyte cells in terms of potential cytotoxicity, immunotoxicity, and genotoxiciy. Data showed that hemocytes were in contact with BMAA. The presence of BMAA in hemolymph did not induce significant effect on hemocytes phagocytosis activity. However, significant DNA damage on hemocytes occurred during the first week (days 3 and 8) of BMAA exposure, followed by an increase of hemocyte mortality after 2 weeks of exposure. Those effects might be an indirect consequence of the BMAA-induced oxidative stress in cells. However, DNA strand breaks and mortality did not persist during the entire exposure, despite the BMAA persistence in the hemolymph, suggesting potential induction of some DNA-repair mechanisms. View Full-Text
Keywords: BMAA; hemocytes; genotoxicity; cytotoxicity; immunotoxicity; freshwater bivalves BMAA; hemocytes; genotoxicity; cytotoxicity; immunotoxicity; freshwater bivalves
►▼ Show Figures 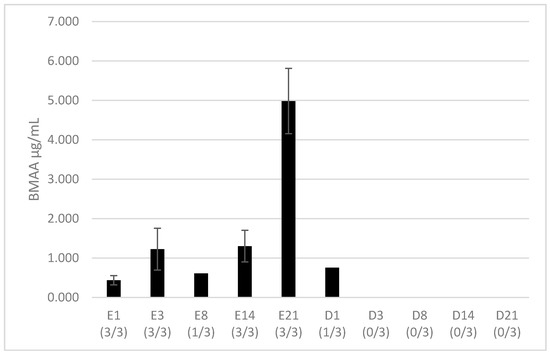