Mycotoxins are emerging toxins in the marine environment, which can co-occur with algal toxins to exert synergistic or antagonistic effects for human seafood consumption. The current study assesses the cytotoxicity of the algal toxin okadaic acid, shellfish, and dust storm-associated mycotoxins alone or in combination on human intestinal (HT-29) and neuroblastoma (SH-SY5Y) cell lines. Based on calculated IC50 (inhibitory concentration 50%) values, mycotoxins and the algal toxin on their own exhibited increased cytotoxicity in the order of sydowinin A < sydowinin B << patulin < alamethicin < sydowinol << gliotoxin ≈ okadaic acid against the HT-29 cell line, and sydowinin B < sydowinin A << alamethicin ≈ sydowinol < patulin, << gliotoxin < okadaic acid against the SH-SY5Y cell line. Combinations of okadaic acid–sydowinin A, –alamethicin, –patulin, and –gliotoxin exhibited antagonistic effects at low-moderate cytotoxicity, but became synergistic at high cytotoxicity, while okadaic acid–sydowinol displayed an antagonistic relationship against HT-29 cells. Furthermore, only okadaic acid–sydowinin A showed synergism, while okadaic acid–sydowinol, –alamethicin, –patulin, and –gliotoxin combinations demonstrated antagonism against SH-SY5Y. While diarrhetic shellfish poisoning (DSP) from okadaic acid and analogues in many parts of the world is considered to be a comparatively minor seafood toxin syndrome, our human cell model studies suggest that synergisms with certain mycotoxins may aggravate human health impacts, depending on the concentrations. These findings highlight the issues of the shortcomings of current regulatory approaches, which do not regulate for mycotoxins in shellfish and treat seafood toxins as if they occur as single toxins. View Full-Text
Keywords: okadaic acid; sydowinin A; sydowinol; alamethicin; patulin; gliotoxin; combination index; synergy okadaic acid; sydowinin A; sydowinol; alamethicin; patulin; gliotoxin; combination index; synergy
►▼ Show Figures 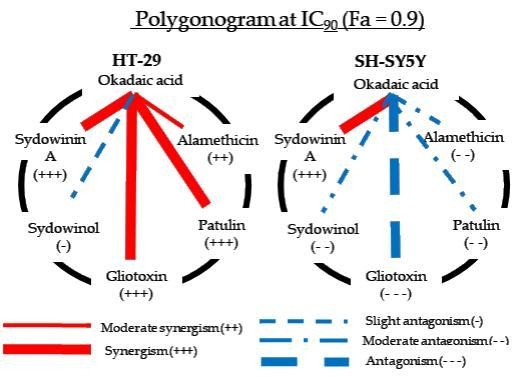