A Time Series of Water Column Distributions and Sinking Particle Flux of Pseudo-Nitzschia and Domoic Acid in the Santa Barbara Basin, California
Previous Article in Journal

There is a clear, unmet need for effective, lightweight, shelf-stable and economical snakebite envenoming therapies that can be given rapidly after the time of a snake’s bite and as adjuncts to antivenom therapies in the hospital setting. The sPLA2 inhibitor, LY315920, and its orally bioavailable prodrug, LY333013, demonstrate surprising efficacy and have the characteristics of an antidote with potential for both field and hospital use. The efficacy of the active pharmaceutical ingredient (LY315920) and its prodrug (LY333013) to treat experimental, lethal envenoming by Micrurus fulvius (Eastern coral snake) venom was tested using a porcine model. Inhibitors were administered by either intravenous or oral routes at different time intervals after venom injection. In some experiments, antivenom was also administered alone or in conjunction with LY333013. 14 of 14 animals (100%) receiving either LY315920 (intravenous) and/or LY333013 (oral) survived to the 120 h endpoint despite, in some protocols, the presence of severe neurotoxic signs. The study drugs demonstrated the ability to treat, rescue, and re-rescue animals with advanced manifestations of envenoming. Low molecular mass sPLA2 inhibitors were highly effective in preventing lethality following experimental envenoming by M. fulvius. These findings suggest the plausibility of a new therapeutic approach to snakebite envenoming, in this example, for the treatment of a coral snake species for which there are limitations in the availability of effective antivenom. View Full-Text
Keywords: snakebite; envenoming; antidote; inhibitor; coral snake; Micrurus fulvius; PLA2; phospholipase A2; neurotoxicity; antivenom snakebite; envenoming; antidote; inhibitor; coral snake; Micrurus fulvius; PLA2; phospholipase A2; neurotoxicity; antivenom
►▼ Show Figures 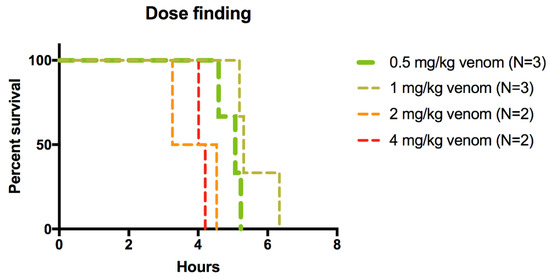