Individual and Combined Effects of Fumonisin B1, Deoxynivalenol and Zearalenone on the Hepatic and Renal Membrane Lipid Integrity of Rats
Previous Article in Journal

Most snake venom toxins are proteins, and participate to envenomation through a diverse array of bioactivities, such as bleeding, inflammation, and pain, cytotoxic, cardiotoxic or neurotoxic effects. The venom of a single snake species contains hundreds of toxins, and the venoms of the 725 species of venomous snakes represent a large pool of potentially bioactive proteins. Despite considerable discovery efforts, most of the snake venom toxins are still uncharacterized. Modern bioinformatics tools have been recently developed to mine snake venoms, helping focus experimental research on the most potentially interesting toxins. Some computational techniques predict toxin molecular targets, and the binding mode to these targets. This review gives an overview of current knowledge on the ~2200 sequences, and more than 400 three-dimensional structures of snake toxins deposited in public repositories, as well as of molecular modeling studies of the interaction between these toxins and their molecular targets. We also describe how modern bioinformatics have been used to study the snake venom protein phospholipase A2, the small basic myotoxin Crotamine, and the three-finger peptide Mambalgin. View Full-Text
Keywords: molecular dynamics simulations; databases; snake peptides; proteomics; molecular modeling molecular dynamics simulations; databases; snake peptides; proteomics; molecular modeling
►▼ Show Figures 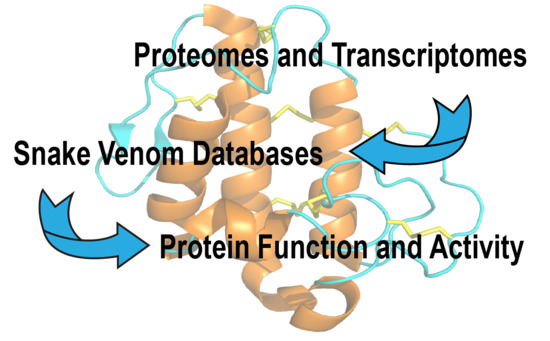