Recent increases of Fusarium head blight (FHB) disease caused by infections with F. poae (FP) and F. langsethiae (FL) have been observed in oats. These pathogens are producers of nivalenol (NIV) and T-2/HT-2 toxin (T-2/HT-2), respectively, which are now considered major issues for cereal food and feed safety. To date, the impact of FP and FL on oat grains has not yet been identified, and little is known about oat resistance elements against these pathogens. In the present study, the impact of FL and FP on oat grains was assessed under different environmental conditions in field experiments with artificial inoculations. The severity of FP and FL infection on grains were compared across three field sites, and the resistance against NIV and T-2/HT2 accumulation was assessed for seven oat genotypes. Grain weight, β-glucan content, and protein content were compared between infected and non-infected grains. Analyses of grain infection showed that FL was able to cause infection on the grain only in the field site with the highest relative humidity, whereas FP infected grains in all field sites. The FP infection of grains resulted in NIV contamination (between 30–500 μg/kg). The concentration of NIV in grains was not conditioned by environmental conditions. FL provoked an average contamination of grains with T-2/HT-2 (between 15–132 μg/kg). None of the genotypes was able to fully avoid toxin accumulation. The general resistance of oat grains against toxin accumulation was weak, and resistance against NIV accumulation was strongly impacted by the interaction between the genotype and the environment. Only the genotype with hull-less grains showed partial resistance to both NIV and T-2/HT-2 contamination. FP and FL infections could change the β-glucan content in grains, depending on the genotypes and environmental conditions. FP and FL did not have a significant impact on the thousand kernel weight (TKW) and protein content. Hence, resistance against toxin accumulation remains the only indicator of FHB resistance in oat. Our results highlight the need for new oat genotypes with enhanced resistance against both NIV and T-2/HT-2 to ensure food and feed safety. View Full-Text
Keywords: Fusarium head blight; nivalenol; T-2/HT-2; resistance; grain properties; β-glucan Fusarium head blight; nivalenol; T-2/HT-2; resistance; grain properties; β-glucan
►▼ Show Figures 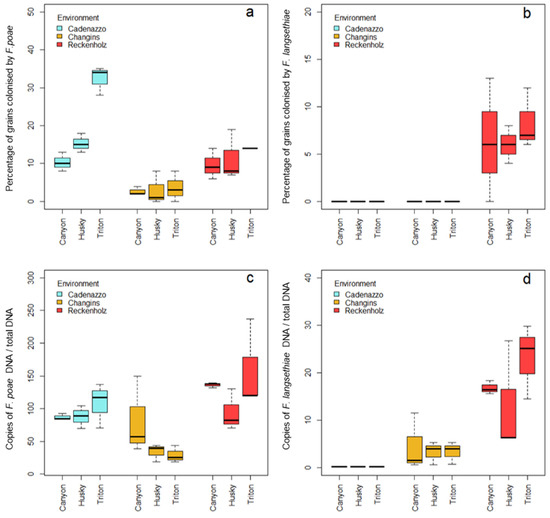