Beneficial Effects of Common Bean on Adiposity and Lipid Metabolism

In developed countries which are at the epicenter of the obesity pandemic, pulse crop consumption is well below recommended levels. In a recent systematic review and meta-analysis of 21 randomized controlled clinical trials, pulse consumption was associated with improved weight control and reduced adiposity, although the underlying mechanisms were a matter of speculation. Common bean (Phaseolus vulgaris L.) is the most widely consumed pulse crop and was the focus of this investigation. Using outbred genetic models of dietary induced obesity resistance and of dietary induced obesity sensitivity in the rat, the impact of bean consumption was investigated on the efficiency with which consumed food was converted to body mass (food efficiency ratio), body fat accumulation, adipocyte morphometrics, and patterns of protein expression associated with lipid metabolism. Cooked whole bean as well as a commercially prepared cooked bean powders were evaluated. While bean consumption did not affect food efficiency ratio, bean reduced visceral adiposity and adipocyte size in both obesity sensitive and resistant rats. In liver, bean consumption increased carnitine palmitoyl transferase 1, which is the rate limiting step in long chain fatty acid oxidation and also resulted in lower levels of circulating triglycerides. Collectively, our results are consistent with the clinical finding that pulse consumption is anti-obesogenic and indicate that one mechanism by which cooked bean exerts its bioactivity is oxidation of long chain fatty acids. View Full-Text
Keywords: pulse crops; bean; adiposity; fatty acid oxidation pulse crops; bean; adiposity; fatty acid oxidation
►▼ Show Figures 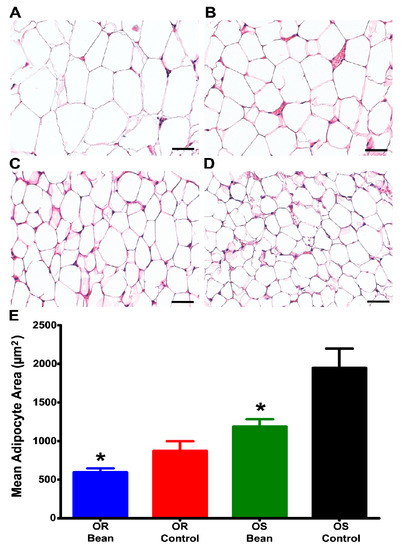