Dietary Protein Consumption and the Risk of Type 2 Diabetes: A Systematic Review and Meta-Analysis of Cohort Studies

All included studies should match the following criteria:(1) the study must have a cohort design; (2) the endpoint of the study was the incidence or mortality of the T2DM; (3) the study had to report risk ratios and the results had to be within a 95% CI in the paper (if this not clear, we requested this information from the authors); and (4) the study had to show the participants’ intake of dietary protein or other high-protein foods such as meat, fish, egg, dairy, soy.

We extracted the following information from each publication we selected: first the author of the publication, publication year, the country where the study was conducted, the number of the samples and cases, T2DM diagnosis and criteria, the year the study began and finished, the years of follow-up, the methods of diet exposure assessment, the RRs and 95% CI, and the adjustment factors (Tables S1–S12).

We used effect models to calculate the summary RRs and 95% confidence to compare the highest dietary protein consumption with the lowest dietary protein consumption [19]. Two-sided p < 0.05 was considered statistically significant. The black square in the forest plots represents the weight contribution of every study. In order to evaluate the extent of variability, the I2-test statistic was adapted to estimate the heterogeneity [20].When I2 < 50% and p > 0.05, there was no heterogeneity; we used the fixed-effect model. The random-effect model was selected when I2 > 50% or p < 0.05. We used the Egger linear regression test and Begg rank correlation test to search for publication bias. When p > 0.05, there was no publication bias. Comprehensive Meta-Analysis V2 was employed for data analysis.

No significant publication bias was detected in the Begg-Mazumdar’s test and Egger’s test of our meta-analyses, provided in Table 1.

In summary, we found that total protein and animal protein consumption were the risk factors for T2DM, and plant protein was the protective factor for T2DM in women, but not in men. We also found that different high-protein foods have a different effect on T2DM risk, even if they all belong to animal proteins. These results underline the significance of taking into account what kind of dietary protein and food sources of protein are recommended for the prevention of diabetes.

Shuang Tian analyzed the data, and wrote the manuscript. Qian Xu, Ruyue Jiang and Tianshu Han supervised the analysis, reviewed the manuscript, and contributed to the discussion. Lixin Na and Changhao Sun developed the study design, acquired funding and administrated the project.

The authors declare no conflicts interest. 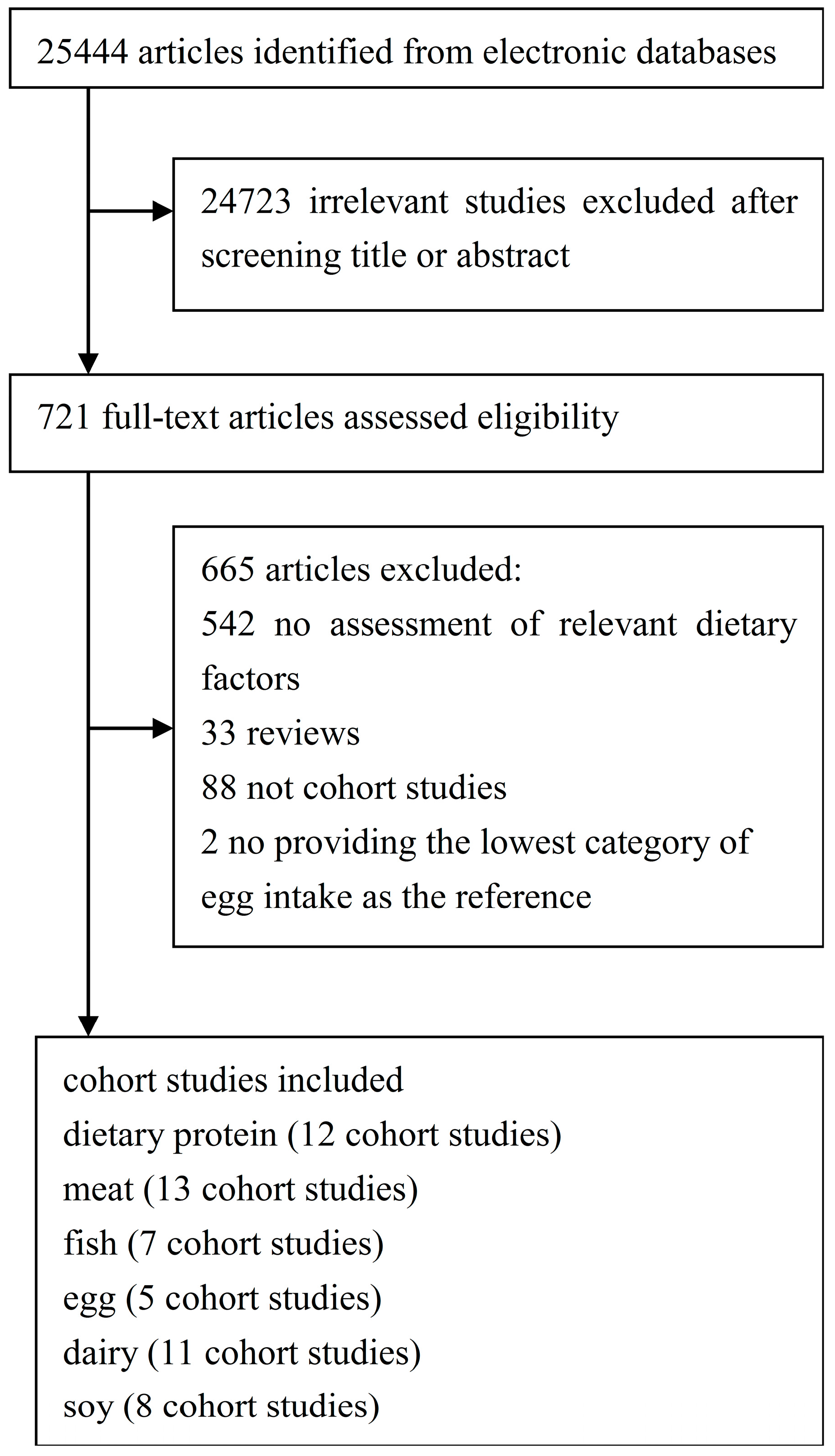 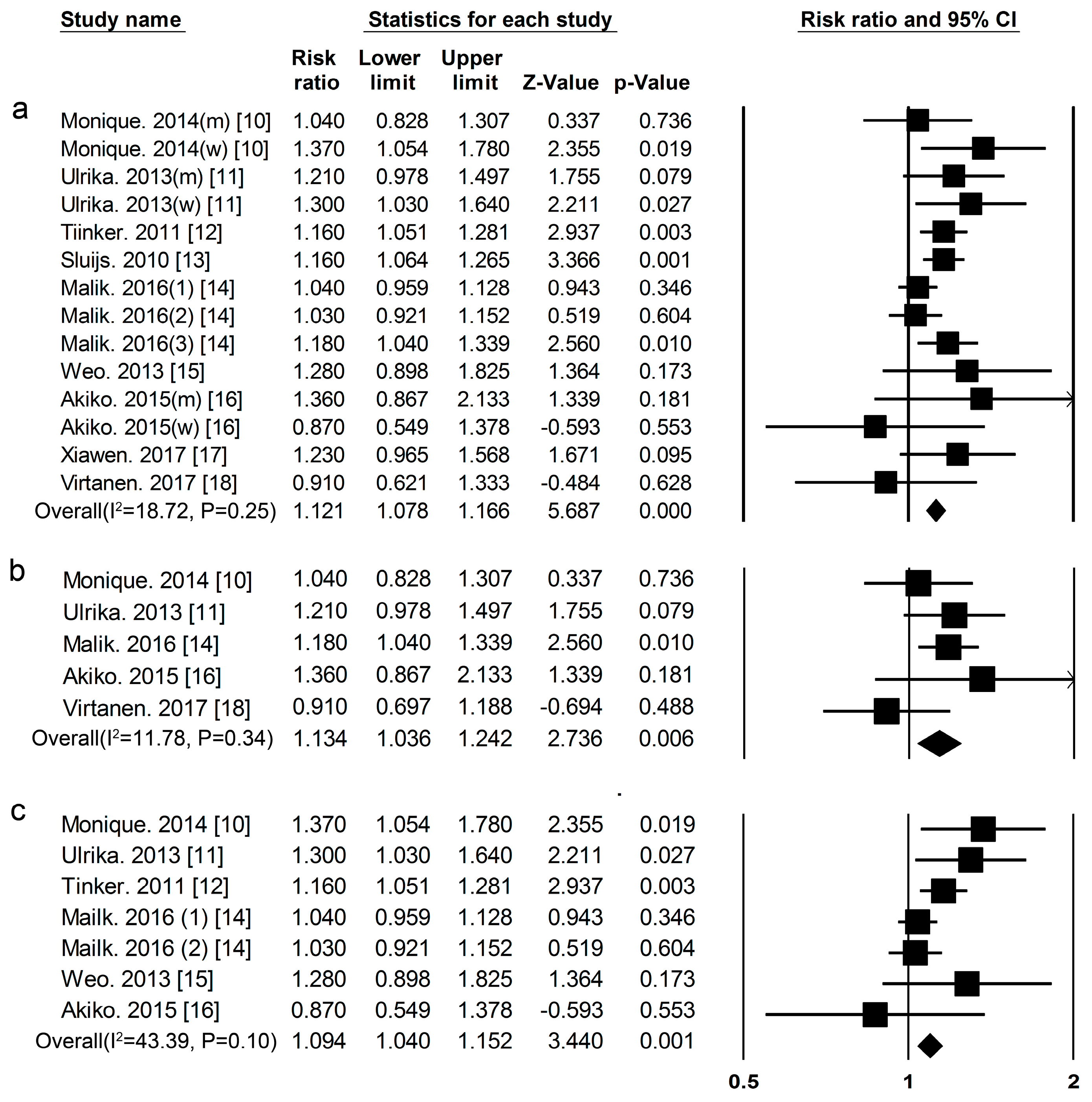 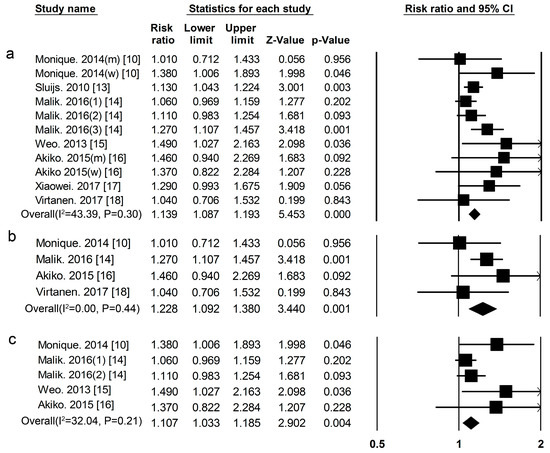 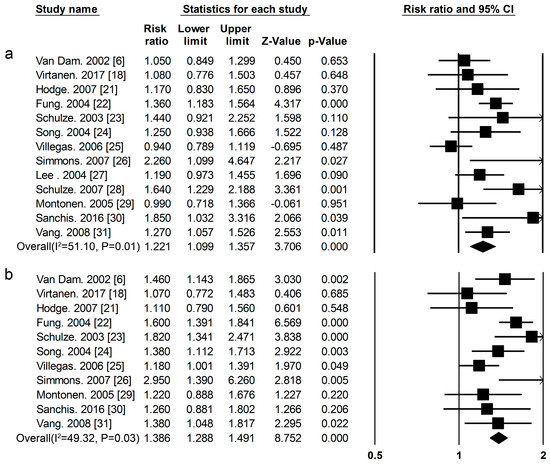 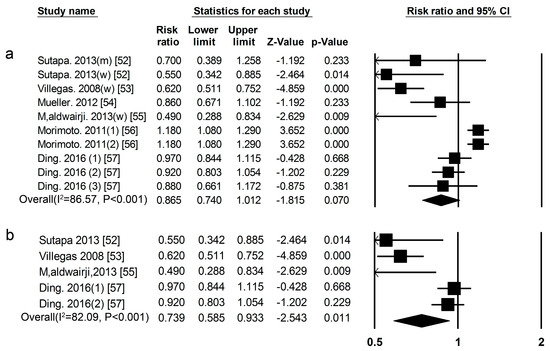 Table 1. Public bias and meta-analysis.
Table 1. Public bias and meta-analysis.
© 2017 by the authors. Licensee MDPI, Basel, Switzerland. This article is an open access article distributed under the terms and conditions of the Creative Commons Attribution (CC BY) license (http://creativecommons.org/licenses/by/4.0/).
We use cookies on our website to ensure you get the best experience. Read more about our cookies here.
Accept
We have just recently launched a new version of our website. Help us to further improve by taking part in this short 5 minute survey here. here.
Never show this again