Polyphenols are thought to be an interesting ergogenic aid for exercise and recovery. However, most studies regarding the effects of polyphenols investigated several days of supplementations. The present work aimed to study the effects of an acute intake of grape and apple polyphenols on the capacity to maintain intense exercise, here named endurance performance. Forty-eight physically active men (31 ± 6 years) were included in this study. During the two testing sessions, volunteers completed an endurance test at a high percentage of their maximal aerobic power and time to exhaustion was measured. Respiratory and pain parameters were also monitored. The preceding evening and 1 h before testing, volunteers had to absorb either 500 mg of polyphenols or placebo according to randomization. In comparison with the placebo, the mean duration of the maximal endurance test was significantly increased with polyphenols (+9.7% ± 6.0%, p < 0.05). The maximal perceived exertion was reached later with polyphenols (+12.8% ± 6.8%, p < 0.05). Practically, the present study showed the beneficial effects of grape and apple polyphenols for athletes looking for endurance performance improvements. The specifically designed profile of polyphenols appeared to enhance the capacity to maintain intensive efforts and delay perceived exertion. View Full-Text
Keywords: maximal exertion; aerobic; cycling maximal exertion; aerobic; cycling
►▼ Show Figures 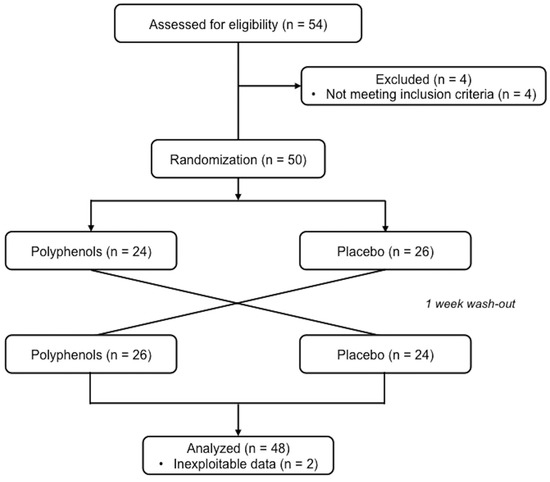