Grain foods collectively, whether through enrichment and/or fortification practices, are an integral part of American dietary practices. Grains represent a key component of energy and nutrients in the 2015–2020 Dietary Guidelines for Americans (2015–2020 DGA) dietary patterns, such that at the 2000 calorie level, both the Healthy U.S.- and Healthy Mediterranean-Style patterns recommend six ounce-equivalent (oz. eq.) servings, daily, of grains, with half of those servings being whole grains, while the Healthy Vegetarian eating pattern recommends 6.5 oz. eq. daily servings of grains, with 3.5 oz. eq. stemming from whole grains [1]. The 2015–2020 DGA places emphasis on increasing consumption of whole grains and concurrently limiting consumption of refined and/or enriched grain foods. While certain grains foods may contain higher levels of nutrients to limit, including added sugar, saturated fat, and sodium, many grain foods contribute positive nutrition to the American diet, and are important contributors of the shortfall nutrients. Recently, secondary analyses of the National Health and Nutrition Examination Survey (NHANES) 2005–2010 identified several grain food patterns of consumption in U.S. adults and reported an association between grain food consumption and nutrient intakes, such that several grain food patterns were linked with greater nutrient intakes, including higher intake of shortfall nutrients and nutrients of public health concern as identified by the 2015–2020 DGA [2]. Similarly, certain grain food patterns in children and adolescents, including both whole and refined grains were associated with greater intakes of shortfall nutrients and/or nutrients of concern, including iron, magnesium, vitamin D, dietary fiber, and folate when compared to children and adolescents consuming non-grain dietary patterns [3].
Classifying all grains that are not whole grains into the one category of refined grains may not be a justified representation of the nutrient contribution provided by many nutrient-dense enriched grain foods, including breads, rolls, cooked cereals, and ready-to-eat cereals. Since less than 5% of Americans consume the minimum recommended amount of whole grains, with the average American consuming less than one oz. eq. of whole grains per day [1,4], it can be assumed that the predominant type of grains consumed by Americans, as collected by NHANES, are refined/enriched grains. Recent analyses using NHANES 2009–2012 demonstrated that grain foods are contributors of the 2015–2020 DGA underconsumed nutrients and nutrients of public health concern [5], including dietary fiber, folate, magnesium, calcium, and iron. When considering sub-categories of grain foods, breads, rolls and tortillas, and ready-to-eat cereals were meaningful contributors (i.e., ≥10% in the diet) of dietary fiber, thiamin, folate, iron, zinc and niacin to the American diet of children and adolescents.
The nutritional contribution of specific grain foods in the diet of American adults by gender is limited, thus, the objective of the present analyses was to determine sources of energy and nutrients, with particular focus on shortfall nutrients, from commonly-consumed grain foods in U.S. adults using data from NHANES, 2009–2012.

The current analyses were recently completed in children and adolescents [5] and the adult data followed a similar statistical procedure using data from NHANES, a nationally-representative, cross-sectional survey of free-living, non-institutionalized, civilian U.S. residents. NHANES data are collected by the National Center for Health Statistics of the Centers for Disease Control and Prevention. Written informed consent was obtained for all participants or proxies, and the survey protocol was approved by the Research Ethics Review Board at the National Center for Health Statistics. Two NHANES datasets (2009–2010; 2011–2012) were combined for the present analyses [6,7]. Nutrient intake data for NHANES 2009–2012 are from the United States Department of Agriculture (USDA) Food and Nutrient Database for Dietary Studies (FNDDS) 5.0 [8]. FNDDS is a database that provides the nutrient values for foods and beverages reported in What We Eat in America (WWEIA), the dietary intake component of NHANES. The WWEIA Food Categories provide an application to analyze food and beverages as consumed in the American diet. For the current analyses, each of the grain foods reported in WWEIA/NHANES are placed in one of the mutually exclusive food categories by linking each food code contained in FNDDS to one WWEIA category [9]. This food code classification scheme includes approximately 150 unique food categories. Mixed grain dishes were separated from the main grain group and were not included in the current analyses.
In the present analyses, the combined sample included 10,697 male and female adult participants, ≥19 years of age, who had reliable and complete 24-h dietary intake data from WWEIA. Females who reported being pregnant at the time of the NHANES data collection procedure have been excluded from the present analyses.

All statistical analyses were performed using SAS software (version 9.2, SAS Institute, Cary, NC, USA). SAS PROC SQL was used to create and prepare data for analyses. SAS PROC SURVEYMEANS was used for all statistical calculations, including means and percentages. Survey weights were used to generate nationally-representative estimates for U.S. adults, which were adjusted for the complex sample design of NHANES. Mean and standard errors of energy, macro-, and micro-nutrients for the daily total diet and from grain food groups were determined. The mean percentage of energy and nutrients contributed from each grain food group were also determined in addition to mean total energy and nutrient intakes. Meaningful sources of energy and nutrients from the overall grain category and the various sub-categories of grain products were defined as an energy or nutrient contribution of ≥10% of the total diet per day. A red solid line was incorporated in all figures to indicate the percentage of energy provided by the grain food category of interest. Those nutrients above the red line show that the grain food category provides a greater percentage in the diet relative to energy, thus indicating nutrient density.

In addition to an all grain category, six main grain food groups were identified from NHANES and categorized by mean gram weight consumption in the total diet (Table 1).
The various grain food sources of energy and nutrients are shown in Figure 1, Figure 2, Figure 3, Figure 4, Figure 5, Figure 6, Figure 7, Figure 8, Figure 9, Figure 10 and Figure 11. Energy and 24 nutrients are listed from all grain foods and various subsets within commonly consumed grain foods (i.e., breads, rolls, tortillas, ready-to-eat cereals, cooked grains, etc.), of which include nutrients to limit and encourage in the daily diet as outlined by dietary guidance [1].

3.1. All Grain Foods: Sources of Energy and Nutrients

3.2. Breads, Rolls, and Tortillas: Sources of Energy and Nutrients by Gender

3.3. Ready-to-Eat Cereals: Sources of Energy and Nutrients by Gender

3.4. Cooked Grains: Sources of Energy and Nutrients by Gender

3.5. Quick Breads and Bread Products: Sources of Energy and Nutrients by Gender

3.6. Sweet Bakery Products: Sources of Energy and Nutrients by Gender

The present data from a U.S. nationally representative sample of free-living adult females and males demonstrates that cumulatively, a variety of whole and refined/enriched grain food groups consumed, help contribute to nutrient density in the total diet. While all grain foods are contributors of energy, total fat and sodium in the U.S. diet, grain foods are also contributors of folate and iron (2015–2020 DGA underconsumed nutrients) and dietary fiber (2015–2020 DGA nutrient of public health concern) [4]. When considering sub-categories of grain foods, breads, rolls and tortillas, and ready-to-eat cereals are meaningful contributors (i.e., ≥10% in the diet) of dietary fiber, thiamin, folate, iron, zinc and niacin to the American diet of adults. Certain grain foods, as part of healthy dietary patterns that include a selection of enriched and fortified grains, may improve overall nutrient intakes and minimize gaps in shortfall nutrient intakes. In contrast, eliminating grains, including both whole and enriched grains from the diet may lead to unintended nutrient consequences, which may negatively impact public health initiatives and health outcomes, particularly if foods substituted into the diet lack nutrient density and promote excess calories. Therefore, dietary strategies that aim to stay within caloric recommendations while monitoring nutrients to limit (i.e., added sugars, sodium and saturated fat) can benefit from the inclusion of several enriched and whole grain food products in the diet. Choosing both whole and refined/enriched grain foods in nutrient-dense forms [1], can help in meeting recommendations for a healthy eating pattern in adult men and women and is aligned with guidance put forth by the 2015–2020 DGA.

The present research project was funded and supported by Grain Foods Foundation in Washington, DC, USA. 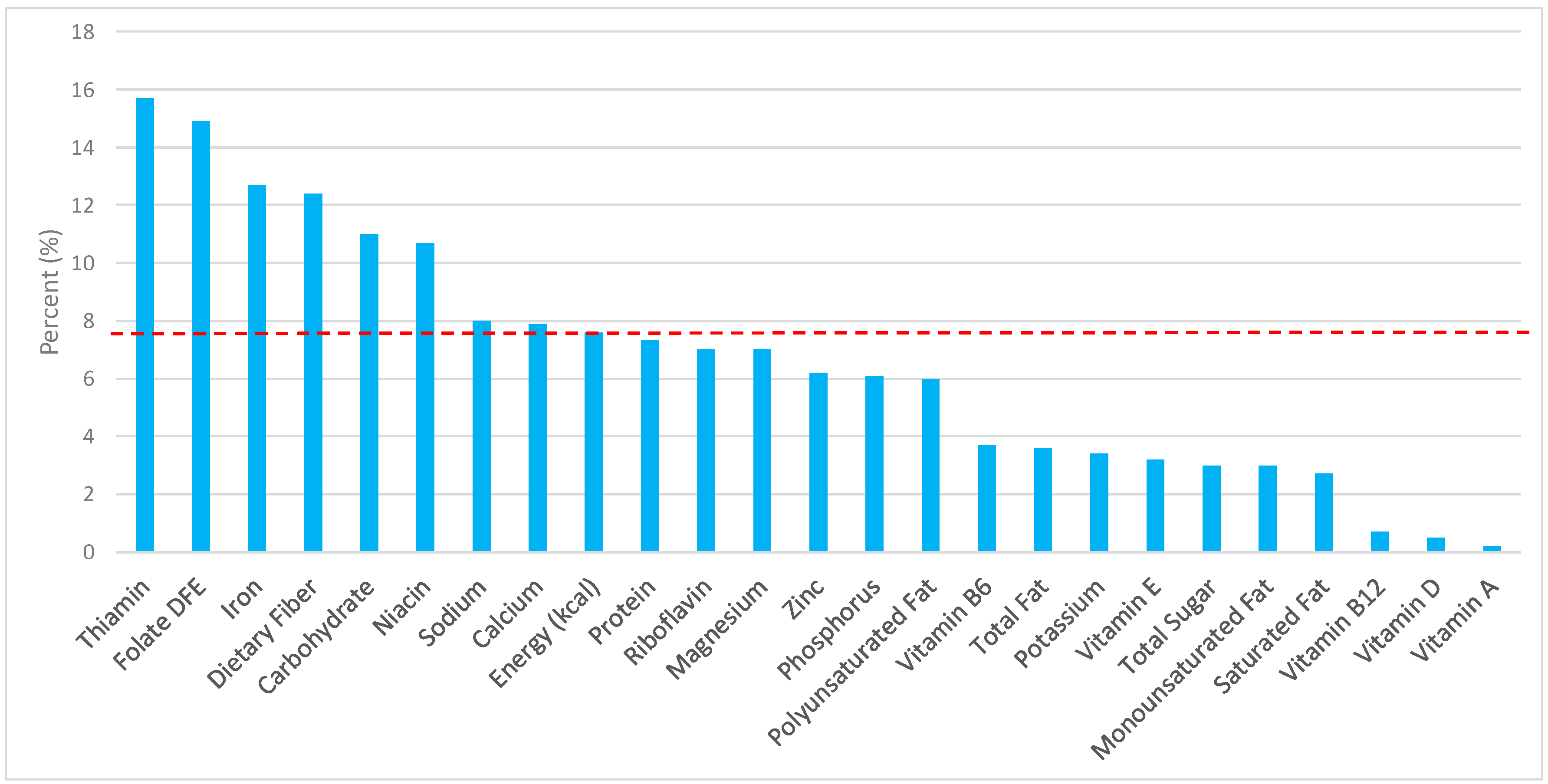