Trans fats are found in foods originating from ruminant animals, such as cows and sheep, and are found in foods containing partially hydrogenated vegetable oils (PHVO). Animal trans fat levels can comprise up to 6% of a product’s fat content in ruminant foods, and industrial trans fat levels can comprise up to 60% of a product's fat content in foods containing PHVO. The discovery of adverse effects on the blood cholesterol profile and the increased risk of coronary heart disease of industrial trans fat [1,2,3,4,5] have led to public health recommendations to lower total trans fat intake to below 1% of total energy intake (En%), primarily by the removal of industrial trans fat [6]. Subsequent voluntary initiatives, trans fat labelling measures and regulatory limits have led to reductions in industrial trans fat, although not in all foods and countries [7,8].
Earlier studies showed that over the past two decades, both the voluntary and regulatory measures to lower industrial trans fat content of foods have resulted in significant reductions in global trans fat intakes [9,10,11,12]. In 1995, the TRANSFAIR study showed that in most Western European countries, the intakes of total trans fat were already below 1 En%. This study also showed that in the majority of the countries, trans fat primarily came from animal sources [13]. However, across countries, large differences exist in the intakes of trans fat. In 2010, estimated intakes varied from 0.2 to 6.5 En% worldwide [10]. At present, many countries actively work on measures to further lower industrial trans fat levels in foods [7,14,15].
Up-to-date data on global trans fat intakes, and its dietary sources are relevant for the development of public health measures and to monitor their effectiveness. Therefore, this study aimed to provide an up-to-date review of intakes of trans fat and its dietary sources in general populations worldwide. A secondary aim was to quantify trans fat and saturated fat levels in biscuits, a food that can nowadays still be relatively high in trans fat, to serve as a marker for the presence of industrial trans fat in countries for which no population dietary intake data are available [16].

We conducted a broad, systematic search strategy to identify dietary intake studies. Peer reviewed papers, reports and grey literature on trans fat intake in countries and regions in any language published after 1995 were considered for inclusion. First, Scopus was searched through 29 May 2017 with the following search terms: “diet” AND “survey” AND (“trans fat” or “trans fatty acids”). In addition, all references reporting trans fat intake from two recent publications on global fat intake were screened [10,17]. Additionally, for each national survey that was identified, earlier and later editions were hand searched through Scopus and Google, and national intake data were checked via the websites of national public health institutes (Supplemental Figure S1). Methods of the analysis and inclusion criteria were not documented in a registered review protocol.
We determined eligibility of all publications and reports based on the following inclusion criteria: (1) national survey or population-based study; (2) trans fat intake measured by food composition data or new analytical data; (3) published after 1995; (4) data from the general adult population; and (5) reporting either the calendar year of the dietary survey or of the food composition data. For countries with multiple datasets, we included all data published after 1995.
For our secondary research question aiming to quantify trans fat and saturated fat levels in biscuits, we conducted a search on Scopus with the elements: “trans fat” AND “composition”. All identified publications were screened to determine eligibility based on the following inclusion criteria: (1) random sampling of biscuits or cookies; (2) new analytical data measured by gas chromatography; (3) published after 2005; (4) reporting both trans fat and saturated fat composition.

From publications or reports that met the inclusion criteria, one investigator extracted the following information: country, type and year of dietary intake survey, type and year of food composition data, age group (19–64 years-or the nearest age), sample size, mean, standard deviation (SD), and 95th percentile of total trans fat intake (g/day and En%), trans fat intake from animal sources (%) and industrial sources (%), and reported local measures to lower trans fat intake (voluntary, mandatory, and year).
Where total trans fat intake was reported both as fatty acids and as fat, we used fatty acids. Where trans fat intake was not reported in either g/day or En%, intakes in these units were calculated using reported energy intake and the energy content of dietary fat of 9 kcal/g. Where data were reported for subgroups (for example by gender), a weighted mean for the total population was calculated by weighing the mean intake of each subgroup by the number of the subjects in this subgroup.
“Animal sources” of trans fat were defined as milk, cheese, eggs, meat, fish, butter, and “industrial sources” of trans fat were defined as oils and fats, biscuits, pizza, grains, seeds, nuts, chocolate, soups, savory snacks, meals, and restaurant foods. In specific publications and reports, clustered food items could contain both animal and industrial sources of trans fat. We regarded these food items an industrial source of trans fat. Examples were butter being clustered in a “fats and oils” food group, and ice-cream being categorized in a “sweet snacks” food group.
The included data were assessed and scored on quality using four criteria: type of survey data (maximum score of 3), dietary assessment method (maximum score of 3), type of food composition data (maximum score of 3), and sample size (maximum score of 2) [18] (Supplemental Table S1). The total attainable score of a study ranged between 4 and 11. Based on the score, three quality categories were defined: high quality (score of 10–11), medium quality (score of 8–9), low quality (score of 4–7).
For dietary intake data, mean population intakes per country were compared to the recommended intake level of less than 1 En% as determined by the Food and Agriculture Organization (FAO)/World Health Organization (WHO) [6]. For biscuit data, mean trans fat levels were compared to the Danish regulatory limit of less than 2 g per 100 g total fat.

The systematic search in Scopus and in references from available publications on global fat intake [10,17] identified 265 publications. After screening, 27 publications were judged eligible for inclusion in the review. Additional hand searching resulted in 16 eligible publications. A flow-chart and reasons for exclusion are given in Supplemental Figure S1. The 43 eligible publications included 64 datasets representing 29 countries (Table 1). One study representing trans fat intakes in Costa Rica [19], was exempted from exclusion. This study should have been excluded as it reported data for adolescents, and not adults. It was decided to be included in the study in the review because it reported repeated measurements of trans fat intakes over time, which was considered to be of sufficient importance to deviate from the inclusion criteria.
The most up-to-date estimates of population total trans fat intake ranged from 0.3 to 4.2 percent of energy intake (En%). In 22 out of 29 (76%) countries mean trans fat intake was below the WHO recommendation of 1 En% (Figure 1). At the time of the survey, Brazil (2008/09), Canada (2008), Costa Rica (2006), Iran (2004), Lebanon (2006), Puerto Rico (2010) and USA (2009/10) reported trans fat intakes above 1 En%. In 16 out of 21 (76%) countries with data on trans fat sources, mean intakes of animal trans fat were higher than that of industrial trans fat. Industrial trans fat intake was higher in Brazil (2008/09), China (2011), Iran (2004), Poland (2009/10) and USA (2009/10).
For 20 countries we found multiple surveys over time so that time trends could be made (Figure 2). These time trends showed substantial declines in trans fat intake over the past two decades. In seven countries, mean intakes decreased from above 1 En% to below 1 En%. Nine countries had trans fat intakes that were already equal or below 1 En% at the time of the first survey, and in four countries trans fat intake did not decrease to below 1 En%. The largest reductions were seen in industrial trans fat intake, although in several countries also trans fat from animal sources reduced. The introduction of voluntary or mandatory measures to lower trans fat in foods were associated with reductions in trans fat intakes in many countries.
The search on trans and saturated fat content of biscuits resulted in 20 publications and reports representing 17 countries (Supplemental Table S2). Of these countries, seven did not have data on population total trans fat intake. At the time of the surveys in Brazil (2012), Germany (2007/09), Italy (2004), Malaysia (2011), New Zealand (2006), Portugal (2012) and Sweden (2007) the trans fat content of biscuits was below the Danish limit of 2 g per 100 g fat. In Argentina (2015), China (2006), India (2009/11), Iran (2011), Korea (2008), Lebanon (2006), Pakistan (2007), Poland (2009/10), Serbia (2009) and Turkey (2005/06) the reported trans fat content of biscuits was higher, up to 26.7 g/100 g fat (Figure 3).
Time trends of the solid fat composition of biscuits could be made for Brazil, Korea, Malaysia, Serbia and Sweden (Supplemental Figure S2). In Brazil, Korea, Malaysia and Serbia, the decrease in trans fat content in biscuits was accompanied by equal or higher content of solid fat (sum of saturated fat and trans fat), whereas in Sweden the solid fat content of biscuits decreased.

In the past 20 years the total intake of trans fat substantially decreased. In the majority of countries for which data are available, average trans fat intake is nowadays lower than the recommended maximum intake of 1 En%, with intakes from animal sources being higher than from industrial sources. Both voluntary and regulatory measures to reduce the intake of industrial trans fat have resulted in substantial reductions in many countries.

Funding for open access was provided by Unilever R & D, Vlaardingen, The Netherlands.

A.J.W. and P.L.Z. are employed by Unilever; Unilever markets food products made of vegetable oils, including margarines and dressings. I.A.B. supervises a student whose project is partly funded by Unilever R & D, The Netherlands. 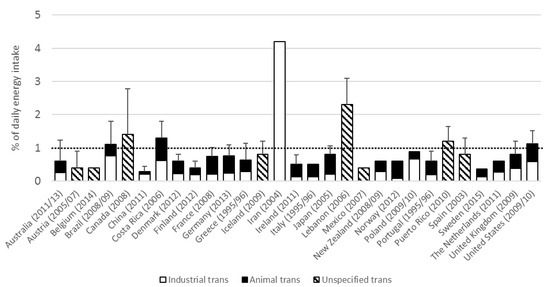 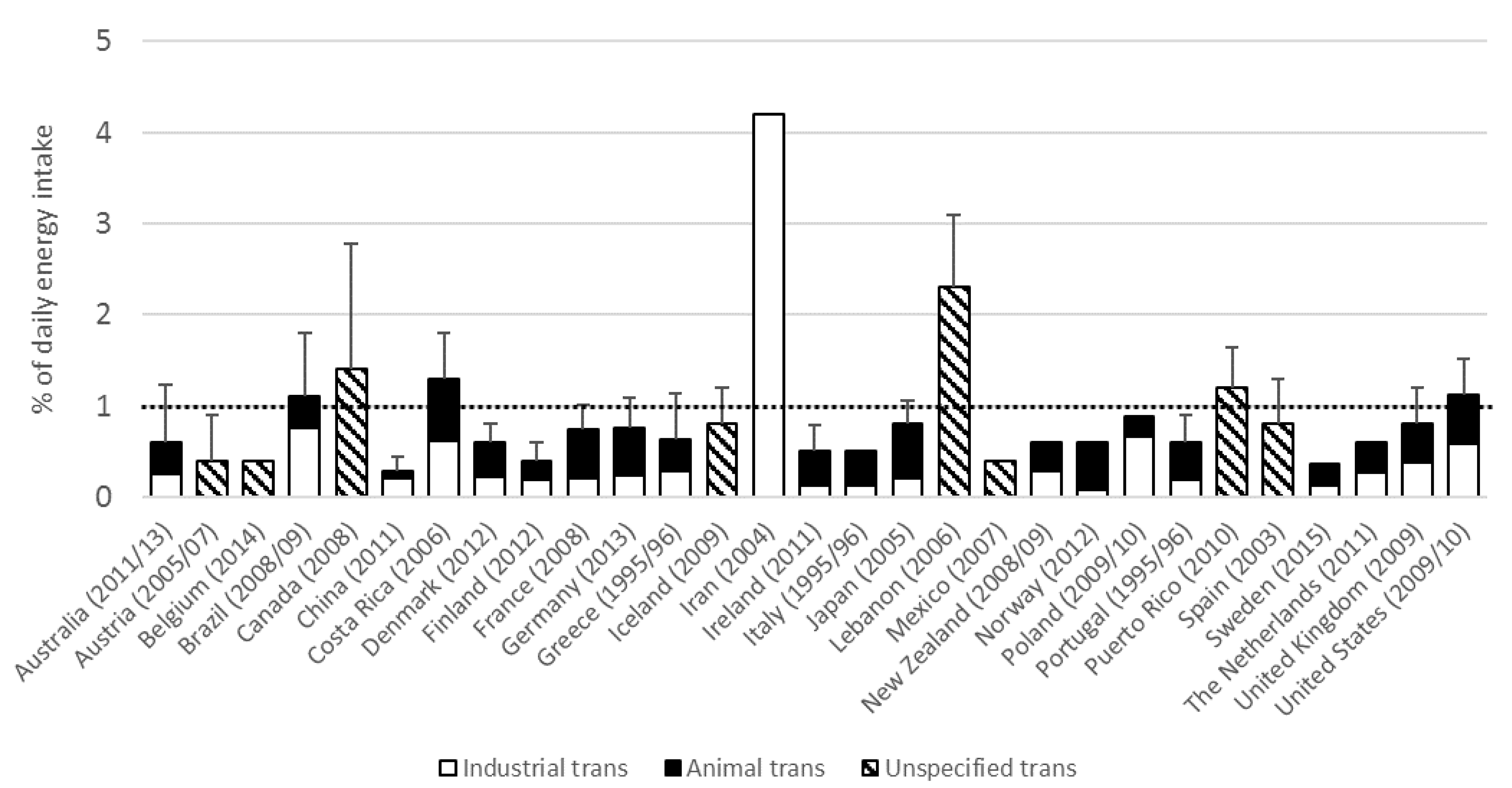 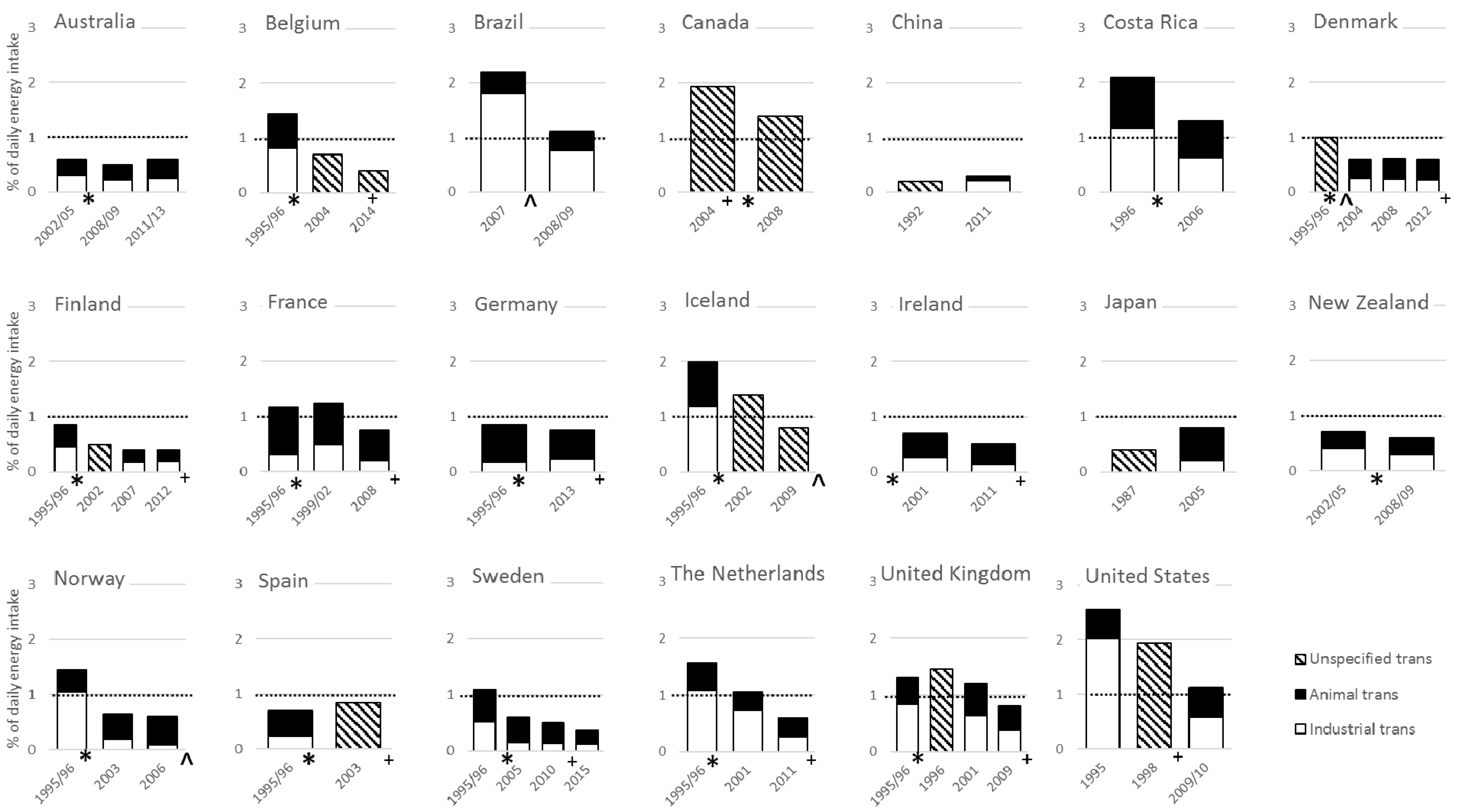 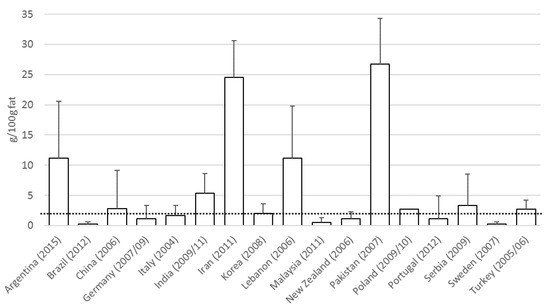 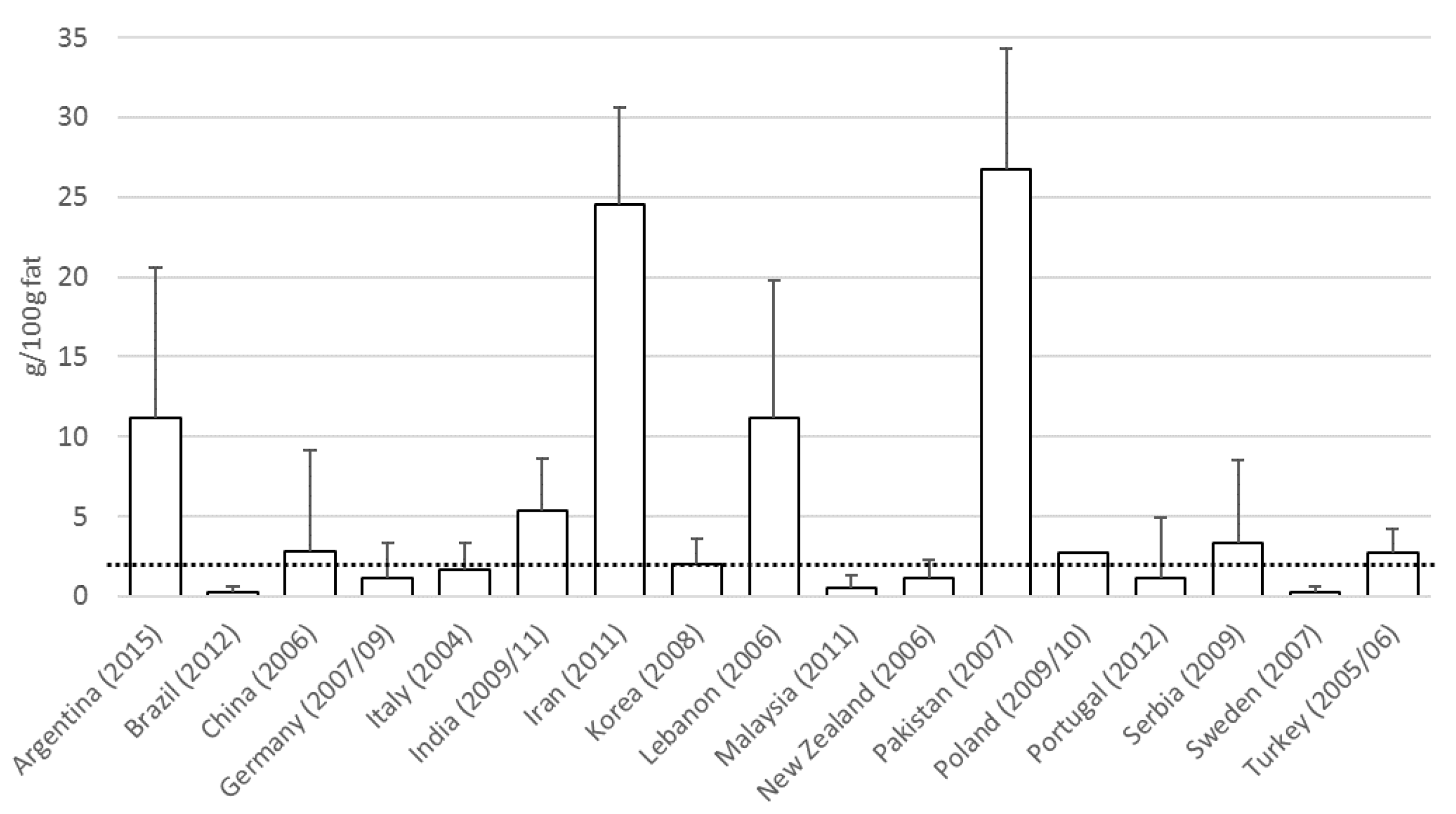 Table 1. Mean intakes of trans fat and its dietary sources in populations from 29 countries.
Table 1. Mean intakes of trans fat and its dietary sources in populations from 29 countries.
Abbreviations: d = day; FFQ = food frequency questionnaire; hr = hour; hh = household; m = month; SD = standard deviation; w = week; 95th p = 95th percentile; # Study quality was based on four criteria: type of survey data, dietary assessment method, type of food composition data, and sample size (Supplemental Table S1). Based on the total attainable score three quality categories were defined: high quality (score 10–11), medium quality (score 8–9), low quality (score 4–7). 1 Animal trans fat was not assessed in Iran; 2 Food composition data originate from USA; 3 90th percentile; 4 maximum; 5 97.5th percentile; 6 Across Europe, voluntary measures were introduced as of 1995 and mandatory labeling of partially hydrogenated vegetable oils (PHVO) was introduced as of 2014.
© 2017 by the authors. Licensee MDPI, Basel, Switzerland. This article is an open access article distributed under the terms and conditions of the Creative Commons Attribution (CC BY) license (http://creativecommons.org/licenses/by/4.0/).
We use cookies on our website to ensure you get the best experience. Read more about our cookies here.
Accept
We have just recently launched a new version of our website. Help us to further improve by taking part in this short 5 minute survey here. here.
Never show this again