Beneficial Effect of Voluntary Exercise on Experimental Colitis in Mice Fed a High-Fat Diet: The Role of Irisin, Adiponectin and Proinflammatory Biomarkers
Previous Article in Journal

Oleuropein (OLE) is the major phenolic secoiridoid of olive tree leaves, and its antioxidant and anti-inflammatory activities have been demonstrated in in vitro and in vivo animal models. The aim of this study was to investigate the activity of OLE in the colonic mucosa from patients with ulcerative colitis (UC). Biopsies obtained during colonoscopy from 14 patients with active UC were immediately placed in an organ culture chamber and challenged with lipopolysaccharide from Escherichia coli (EC-LPS) at 1 μg/mL in the presence or absence of 3 mM OLE. The expression of cyclooxygenase (COX)-2 and interleukin (IL)-17 was assessed in total protein extracts from treated colonic biopsies by Western blotting. Levels of IL-17 were also measured in culture supernatant by ELISA. A microscopic evaluation of the cultured biopsies was performed by conventional histology and immunohistochemistry. The expression of COX-2 and IL-17 were significantly lower in samples treated with OLE + EC-LPS compared with those treated with EC-LPS alone (0.80 ± 0.15 arbitrary units (a.u.) vs. 1.06 ± 0.19 a.u., p = 0.003, and 0.71 ± 0.08 a.u. vs. 1.26 ± 0.42 a.u., p = 0.03, respectively) as were the levels of IL-17 in culture supernatants of OLE + EC-LPS treated colonic samples (21.16 ± 8.64 pg/mL vs. 40.67 ± 9.24 pg/mL, p = 0.01). Histologically, OLE-treated colonic samples showed an amelioration of inflammatory damage with reduced infiltration of CD3, CD4, and CD20 cells, while CD68 numbers increased. The anti-inflammatory activity of OLE was demonstrated in colonic biopsies from UC patients. These new data support a potential role of OLE in the treatment of UC.
Keywords: oleuropein; ulcerative colitis; cyclooxygenase-2; interleukin-17; olive oil oleuropein; ulcerative colitis; cyclooxygenase-2; interleukin-17; olive oil

Ulcerative colitis (UC) is a chronic bowel disease characterized by colonic mucosal inflammation and associated with immune system dysregulation [1]. Despite promising advances in the knowledge of the genetic, immune and inflammatory mechanisms, and potential environmental factors contributing to the disease, the pathogenetic scenario is still not fully understood [2]. UC therapy, whose goal is to induce and maintain remission, is presently based on anti-inflammatory nonsteroid drugs such as mesalamine, corticosteroids, and immuno-suppressive molecules [3]. With the advent of the biologic era over the last decade, drugs such as infliximab and other anti-tumor necrosis factor monoclonal antibodies have revolutionized the treatment strategy of inflammatory bowel disease (IBD), and novel biologic agents are still emerging. Nevertheless, these drugs are much more expensive than conventional therapy [4]. Furthermore, up to 20–30% of patients fail to respond to these drugs and concerns also arise about their potential adverse side effects [5]. Surgery is the last option in critical patients, but is often associated with short- and long-term complications [6]. Therefore, alternatives for a safer, cheaper, and more efficacious approach in managing UC patients are being sought.
Nutraceutical compounds, such as bioactive peptides, phytochemicals, and omega 3-polyunsaturated fatty acids, are currently under investigation for their potentially useful activities in IBD [7]. Dietary polyphenols are able to modulate intestinal inflammation, reducing oxidative stress and inflammation via several pathways [8]. Beneficial effects on human health from the oil, fruits, and leaves of the olive tree have been documented and attributed to their phenolic content [9]. Oleuropein (OLE), the major phenolic secoiridoid from the olive tree leaves, has been found to exert antioxidant, antiangiogenic and anti-inflammatory effects [10]. Observations made in animal models and healthy humans have shown the intraluminal stability of OLE in the small intestinal mucosa and the rapid degradation by the colonic microflora into its active metabolite hydroxytyrosol (HT) [11,12]. No adverse effects were reported from acute toxicity studies conducted in animal species and from human studies, supporting the safety profile of OLE and its metabolites [13,14].
In a mouse model of dextran sodium sulfate (DSS)-induced colitis, OLE reduced neutrophil, macrophage, and eosinophil accumulation in colon tissue and inhibited COX-2 expression, which is known to be enhanced in the colonic epithelium of UC patients [15]. In the same animal model, OLE was found to downregulate the Th17 response, a key proinflammatory pathway activated in IBD [16]. These findings led us to hypothesize that OLE may have the potential to reverse chronic inflammation in UC.

Fourteen outpatients (8 males, 6 females, median age 59 years, range 39–80) with UC who underwent routine colonoscopy were enrolled in this study. Diagnosis of IBD was assessed in accordance with current clinical guidelines and criteria based on endoscopic, radiological and histopathologic examination [17]. Since the purpose of the study was to examine the anti-inflammatory effects of OLE in UC, we selected patients who had mild to moderate active ulcerative colitis, defined by a Mayo score ranging from 4 to 6, median 6 [18]. Eight UC patients had pancolitis, the remaining 6 had left-sided colitis. All the patients were treated with oral and topical mesalamine at the time of biopsy, were not on immunomodulating medications including thiopurines or biologics and had suspended any steroid treatment, both oral and local, at least three months earlier. None of them had ever been treated with anti-TNF alpha agents, cyclosporine, or methotrexate. Characteristics of the patients are summarized in Table 1. During colonoscopy, ten biopsies were taken from endoscopically affected areas but avoiding frankly ulcerated areas. All biopsies were taken with the same biopsy forceps and by the same endoscopist (FL) to ensure the samples were uniform in size.

Biopsy samples were immediately placed on steel grids in the central well of an organ culture dish containing RPMI 1640, 5% fetal bovine serum, 10 mmol/L l-glutamine, 0.25 μg/mL amphotericin B (all obtained from Invitrogen, Carlsbad, CA, USA). Then, the dishes were placed in an organ culture chamber at 37 °C in 95% O2, 5% CO2 for 4 and 20 h, and biopsies were stimulated or not (untreated controls) with LPS from Escherichia coli (EC-LPS, Escherichia coli Serotype O127:B8 Lipopolysaccharide, Sigma-Aldrich, Milan, Italy) at a concentration of 1 μg/mL, to induce an inflammatory response, in the absence or presence of OLE at a final concentration of 3 mM. OLE was obtained using a novel sustainable synthetic strategy, as described by Procopio et al. [19]. Due to its high water solubility, OLE was dissolved in the same medium used for organ culture, to give a stock solution at a concentration of 20 mM. One biopsy specimen from each treatment was collected after 4 h and embedded in paraffin for histologic evaluation, while the remaining samples were snap-frozen after 20 h and then stored at −80 °C for further protein extraction. To exclude direct toxicity of OLE, the viability of the biopsies over the culture period was checked by hematoxylin/eosin (H & E) staining of frozen tissue sections. The explants were considered viable only if the morphology of the tissue was intact with well-defined crypts, epithelial surface and adequate and strong uptake of H & E.
Preliminary experiments in our Laboratory were performed to optimize the dose range (0.1, 0.5, 1, 3, 5, and 10 mM of OLE) and time course (6, 8, 12, 16, and 20 h).

Levels of COX-2 and IL-17 were assessed in total protein extracts from cultured biopsy specimens after 20 h. Total proteins (40 µg) were resolved by sodium dodecyl sulfate-polyacrylamide gel electrophoresis and electrophoretically transferred onto an Immobilon-P membrane (Amersham, Life Sciences Inc., Buckinghamshire, UK); a 10% gel was used in the detection of COX-2 whilst a 12% was used in the detection of IL-17. Ponceau S staining was performed to confirm the equal loading and transfer of proteins. The membranes were blocked for 1 h in ‘blocking buffer’ (5% nonfat dry milk in 10 mmol/L Tris-HCl, 100 mmol/L NaCl, and 0.1% Tween 20, pH 7.6). This was followed by incubation with COX-2 and IL-17 mAbs (Santa Cruz Biotechnology, Santa Cruz, CA, USA), diluted 1/500 in blocking buffer overnight at 4 °C, and then with horseradish peroxide-conjugated goat anti-rabbit IgG mAb, diluted 1/2000 for 1 h (Santa Cruz Biotechnology). All the blots were stripped and reprobed with an anti-β-actin antibody diluted 1/5000 (from Sigma), and the secondary antibody used was horseradish peroxide-conjugated goat anti-mouse IgG mAb (Santa Cruz Biotechnology) diluted 1/2000. Chemiluminescence luminol reagent (Santa Cruz Biotechnology) was used for detection. Bands were measured densitometrically, and their relative density calculated based on the density of the β-actin bands in each sample. Values were expressed as arbitrary densitometric units (a.u.) corresponding to signal intensity.

2.5. Measurement of IL-17 in the Culture Supernatants

Culture supernatants were collected after 20 h and stored at −80 °C. Levels of IL-17 were measured by enzyme-linked immunosorbent assay (ELISA, R & D Systems, Minneapolis, MN, USA) following the manufacturers’ instructions. The amount of cytokine was quantified within each supernatant in duplicate. Results were given as pg/mL, normalized on protein content and the mean value with standard deviation was calculated.

Preliminary data experiments in our Laboratory suggested an optimal 4 h culture in order to minimise any alteration in gland cytoarchitecture upon microscopic evaluation. Biopsy specimens were fixed in 4% paraformaldehyde. Following dehydration and paraffin-embedding, biopsies were cut into 3–10 μm thick sections and stained with H & E. Colonic sections were processed through deparaffinization, rehydration using Dako En Vision Detection™ FLEX+, Mouse, High pH system (Peroxidase/DAB+, K5007, Dako Italia SRL, Milan, Italy), and immunohistochemical staining was performed using a panel of rabbit monoclonal antibodies against CD3-CD4-CD20-CD68 at 1:200 dilution (Novus Biological, Milan, Italy). Antigen expression and distribution was visualized using Dako Autostainer after 60 min at room temperature. Hematoxylin was used for counterstaining. All the specimens fulfilled the criteria of intact morphology and H & E uptake in order to be included in this final analysis. Conventional histology and immunohistochemistry were performed by an expert pathologist (LT) who was blinded to the clinical and experimental data. For quantification, a blinded scoring was used and rated with no (−), few (+), moderate (++) and intense (+++) staining.

Mann-Whitney U test and the paired two tailed Student’s test was used for statistical analyses, as appropriate. A p-value of less than 0.05 was considered statistically significant.

All the patients gave informed consent to the study and for the procurement of further biopsies in addition to those needed for clinical management during colonoscopy. The study was approved by the local Research Ethics Committee (n. 2013.31).

3.2. OLE Suppresses IL-17 in Both Mucosa and Supernatant of Colonic Biopsy Culture

The authors would like to thank Ashour Michael for revision of the English language. 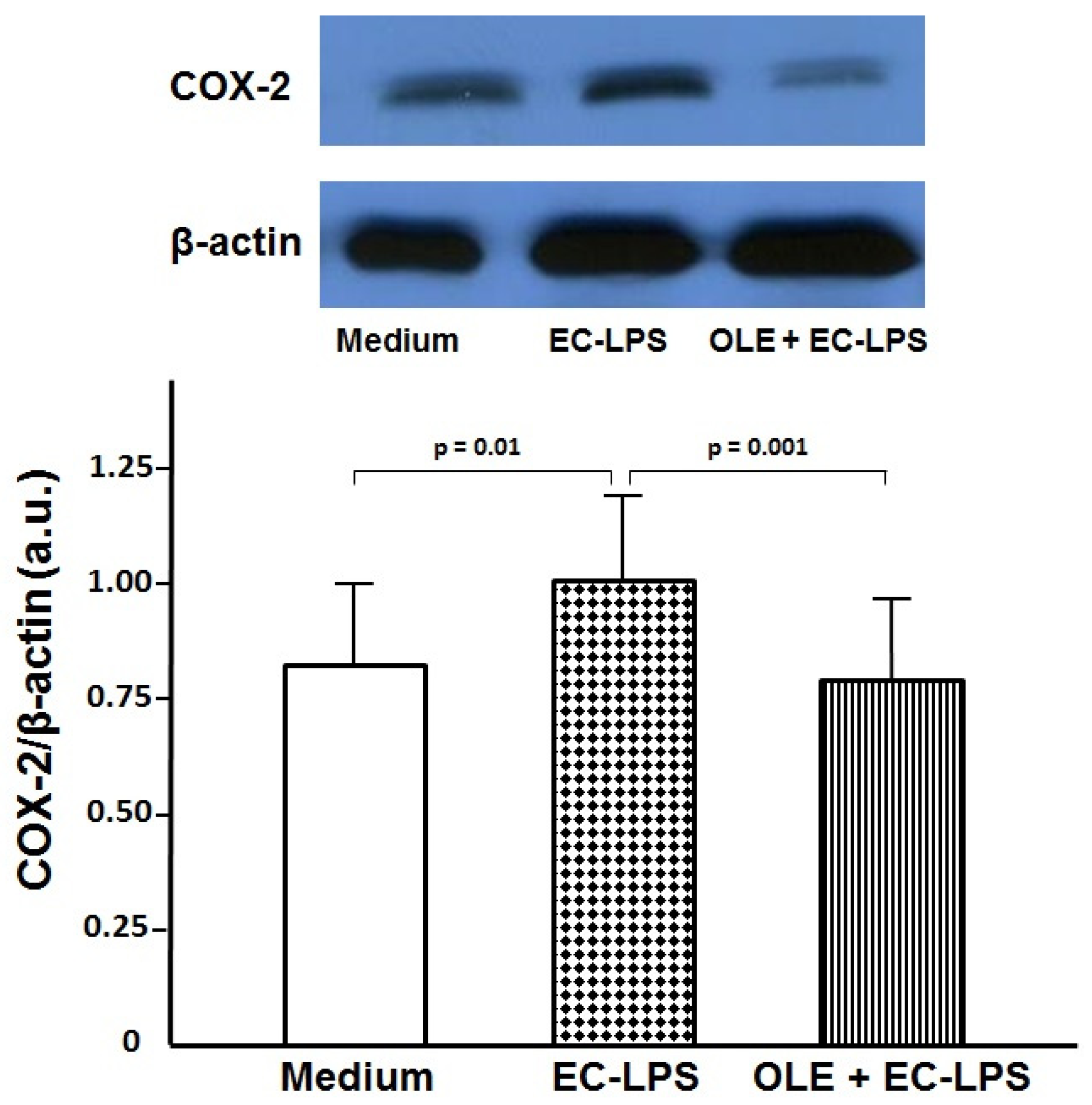 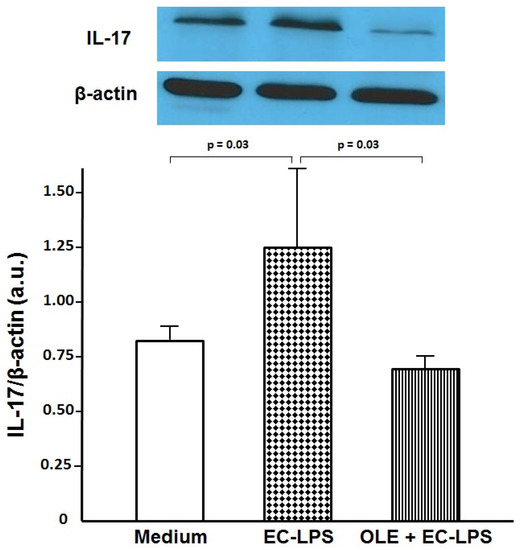 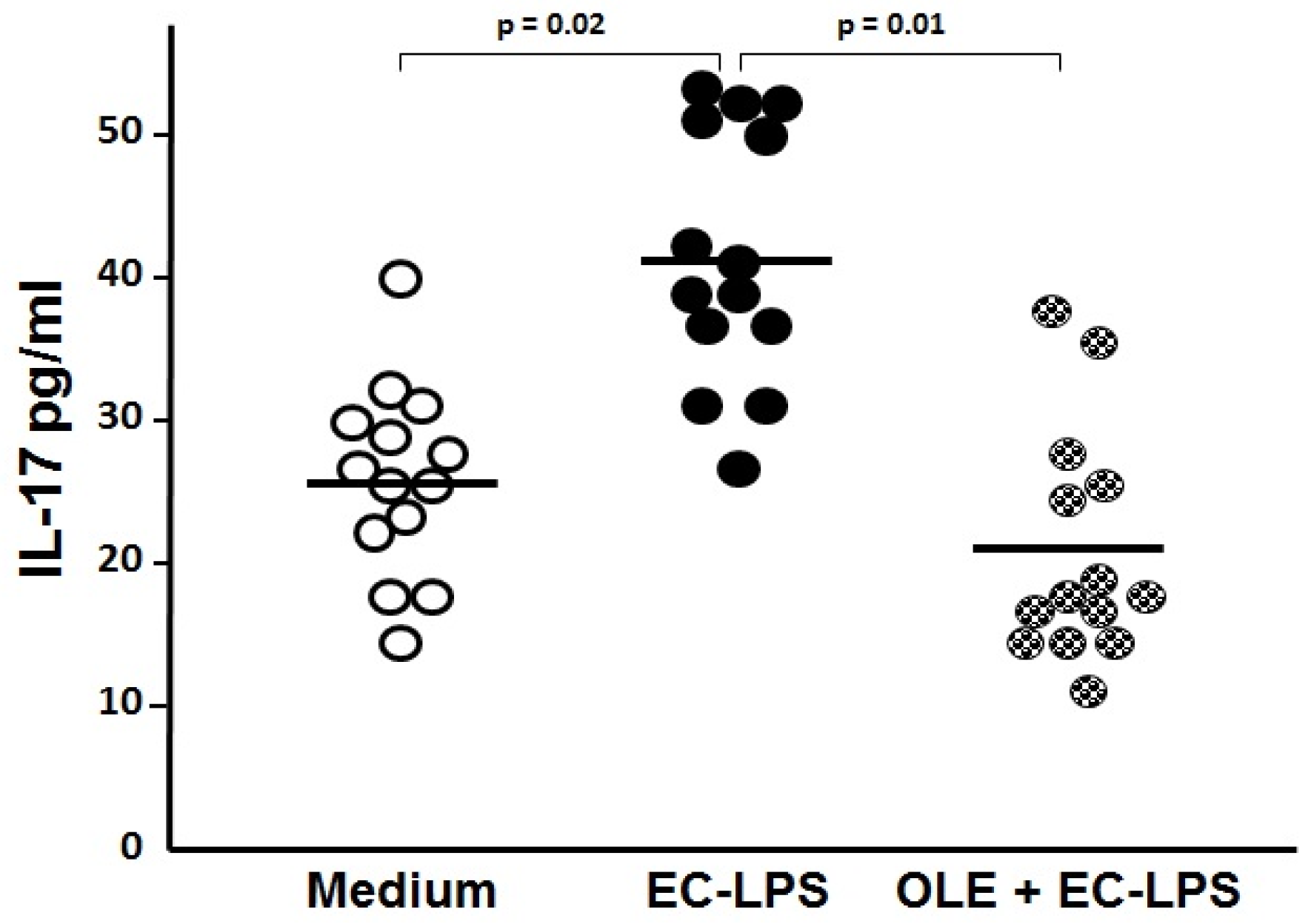 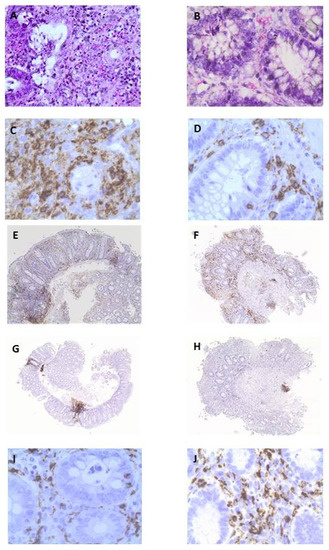 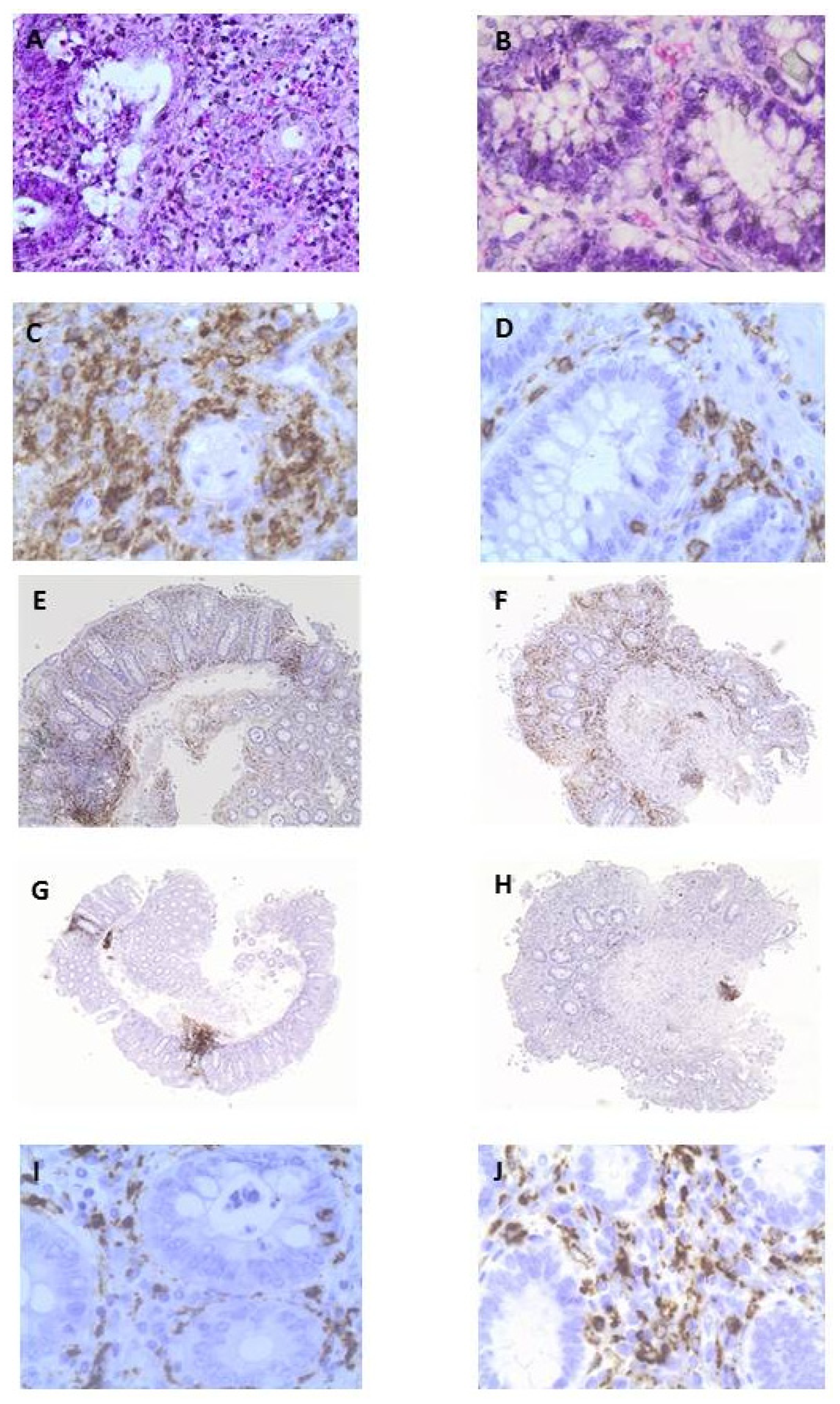