A Multifunctional Bread Rich in Beta Glucans and Low in Starch Improves Metabolic Control in Type 2 Diabetes: A Controlled Trial

The Association between Vitamin D Deficiency and Diabetic Retinopathy in Type 2 Diabetes: A Meta-Analysis of Observational Studies

:
Emerging evidence from in vivo and in vitro studies have shown that vitamin D may play an important role in the development of diabetic retinopathy (DR), but individually published studies showed inconclusive results. The aim of this study was to quantitatively summarize the association between vitamin D and the risk of diabetic retinopathy. We conducted a systematic literature search of Pubmed, Medline, and EMBASE updated in September 2016 with the following keywords: “vitamin D” or “cholecalciferol” or “25-hydroxyvitamin D” or “25(OH)D” in combination with “diabetic retinopathy” or “DR”. Fifteen observational studies involving 17,664 subjects were included. In this meta-analysis, type 2 diabetes patients with vitamin D deficiency (serum 25(OH)D levels <20 ng/mL) experienced a significantly increased risk of DR (odds ratio (OR) = 2.03, 95% confidence intervals (CI): 1.07, 3.86), and an obvious decrease of 1.7 ng/mL (95% CI: −2.72, −0.66) in serum vitamin D was demonstrated in the patients with diabetic retinopathy. Sensitivity analysis showed that exclusion of any single study did not materially alter the overall combined effect. In conclusion, the evidence from this meta-analysis indicates an association between vitamin D deficiency and an increased risk of diabetic retinopathy in type 2 diabetes patients.
Keywords:
vitamin D; diabetic retinopathy; type 2 diabetes; meta-analysis

Relevant articles were identified by a systematic literature search of Pubmed, Medline, and EMBASE through September 2016, using the following keywords: “vitamin D” or “cholecalciferol” or “25-hydroxyvitamin D” or “25(OH)D” in combination with “diabetic retinopathy” or “retinopathy” or “DR”. Additionally, we manually searched all eligible original articles, reviews, and other relevant articles. This meta-analysis was performed following the guidelines for observation study protocols (Meta-analysis Of Observational Studies in Epidemiology (MOOSE) guidelines) [17].

Original articles evaluating the relationship between serum vitamin D status and diabetic retinopathy were reviewed and selected if they met the following inclusion criteria: (a) the study population was type 2 diabetes patients; (b) DR was the outcome, and the control group consisted of type 2 diabetes patients without DR; (c) the study presented sample sizes and odds ratios (OR) with 95% confidence intervals (CI) or information that could be used to infer these results; (d) vitamin D deficiency was defined as a 25(OH)D level below 20 ng/mL, and vitamin D insufficiency was defined as 25(OH)D levels of 21–29 ng/mL; (e) the study was published in English; and (f) the study met the predefined methodological quality assessment criteria for observational studies (Supplementary Data Box 1). Animal experiments, chemistry, or cell-line studies and editorials, commentaries, review articles, and case reports were excluded. Other exclusion criteria consisted of studies with a score of 0 for any item or a total score <7 out of 10 maximal points [18].
Two independent reviewers (Bang-An Luo and Fan Gao) reviewed all the literature searches and acquired full-length articles for all citations meeting the predefined selection criteria. Final inclusion or exclusion decisions were made after reading the full text. We resolved any disagreements through consensus or arbitration by a third reviewer (Lu-Lu Qin).
The following information was extracted from each article: the last name of first author, publication year, location of study, study design, sample size, 25(OH)D assay methods, 25(OH)D concentration, and the prevalence of vitamin D deficiency. In the case of relevant missing data, contacts were made to the main authors for more information.

We performed this meta-analysis with RevMan Software (Version 5.2, Cochrane Collaboration, London, UK). The odds ratio (OR) and weight mean difference (WMD) were used as measures of associations between vitamin D status and risk for DR. If the OR and 95% CI were not available for the meta-analysis, these data were extracted from the selected articles to construct 2 × 2 tables of serum low vitamin D status versus the presence or absence of diabetic retinopathy.
We used forest plots to visually assess pooled estimates and corresponding 95% CIs for each study. The heterogeneity among the results of the included studies was evaluated with I2 statistical tests. The percentage of I2 < 25, near 50, and >75 indicated low, moderate, and high heterogeneity, respectively. A fixed-effects model or a random-effects model was used to combine the study results according to the heterogeneity. Once the effects were found to be heterogeneous (I2 > 50%), a random effects model was used. Otherwise, a fixed effect model was used.
Potential publication bias was assessed using the funnel plots. A sensitivity analysis was conducted to test the robustness of results, as well as to investigate the effect of a single article on the overall risk estimated by removing one article in each turn. Additionally, a subgroup analysis was performed to explore the possible explanations for heterogeneity. All the p-values were for a two-tailed and p < 0.05 was considered as statistically significant.

Of the 238 articles identified from our initial search, a total of 15 studies were finally identified as eligible for inclusion in this meta-analysis through a strict screening process (Figure 1). The quality assessment showed that the quality scores of these studies ranged from 8.5 to 10 according to the MOOSE guidelines, which indicates that all of the selected studies were of high quality (Supplementary Table S1).

3.2. Characteristics of the Included Studies

The relationship between serum vitamin D deficiency (VDD) and the risk of diabetic retinopathy is shown in Figure 2 and Supplementary Table S2. Eight studies involving 13,435 participants were included. As the results of this meta-analysis show, type 2 diabetes with vitamin D deficiency (serum 25(OH)D levels <20 ng/mL) had an increased risk of developing diabetic retinopathy (OR = 2.03, 95% CI: 1.07, 3.86) in the random-effects model.
Based on four studies, the pooled OR for vitamin D insufficiency (VDI, serum 25(OH)D levels <30 ng/mL) was calculated as (OR = 0.89, 95% CI: 0.20, 4.02) (Supplementary Table S2 and Supplementary Figure S1). Only the result of vitamin D deficiency showed that low serum vitamin D status increased the risk of diabetic retinopathy.
The comparison of the mean difference between the DR group and the control group (non-DR group) is shown in Figure 3. From the results of the random-effects model, the pooled effect was −1.7 ng/mL (95% CI: −2.75, −0.66) and significant heterogeneity was observed (I2 = 80%, p < 0.001). It showed that serum 25(OH)D levels were significantly lower in diabetic retinopathy patients than the control in type 2 diabetes. This result demonstrated that vitamin D deficiency is significantly related with an increased risk of DR.

No obvious publication bias was observed in the funnel plots of this meta-analysis (Supplementary Materials Figure S6).

All authors participated in the process of this meta-analysis. 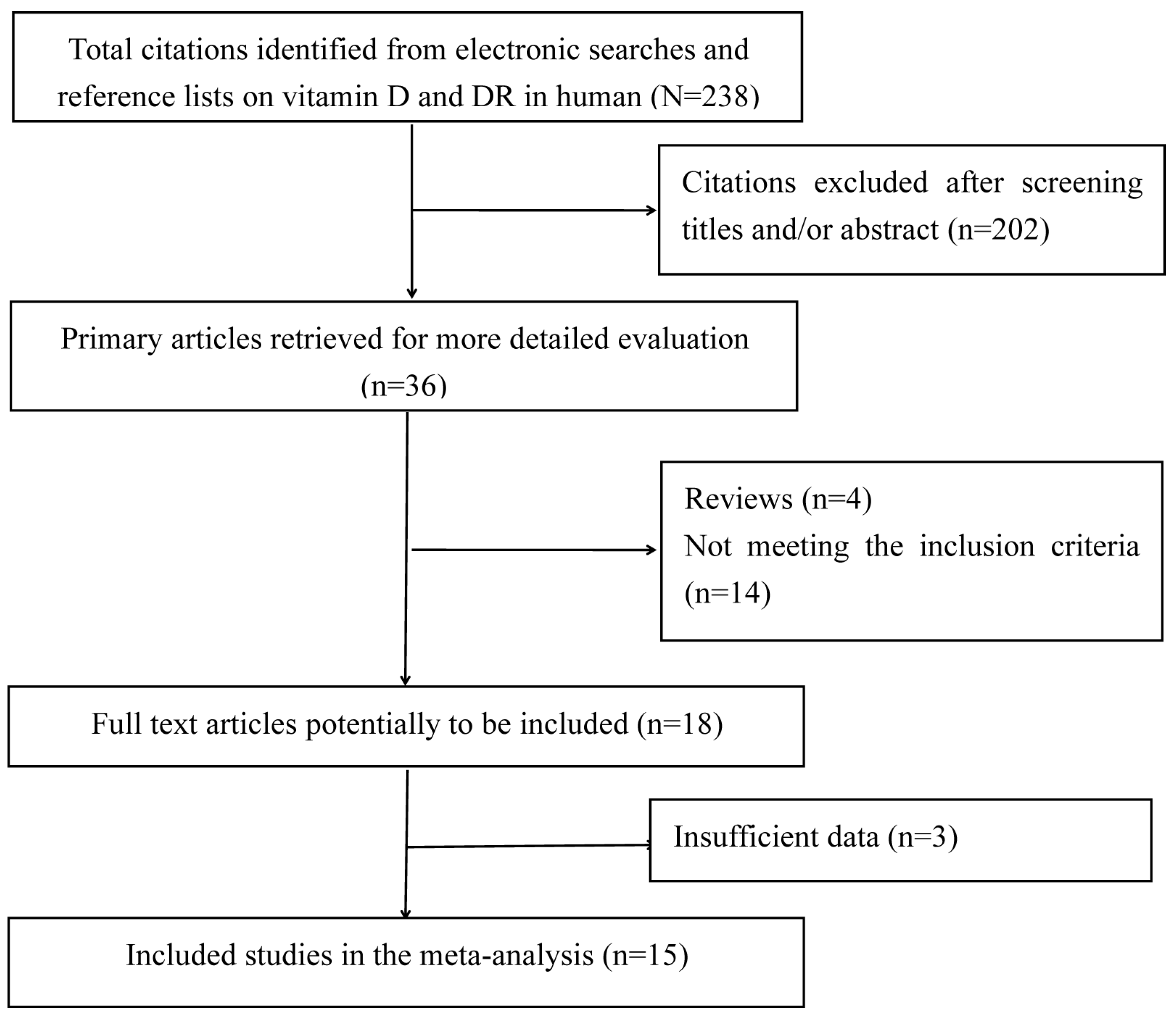