Association between Circulating Vitamin D Level and Urolithiasis: A Systematic Review and Meta-Analysis

:
Background. Mother’s own milk is the first choice for feeding preterm infants, but when not available, pasteurized human donor milk (PDM) is often used. Infants fed PDM have difficulties maintaining appropriate growth velocities. To assess the most basic elements of nutrition, we tested the hypotheses that fatty acid and amino acid composition of PDM is highly variable and standard pooling practices attenuate variability; however, total nutrients may be limiting without supplementation due to late lactational stage of the milk. Methods. A prospective cross-sectional sampling of milk was obtained from five donor milk banks located in Ohio, Michigan, Colorado, Texas-Ft Worth, and California. Milk samples were collected after Institutional Review Board (#07-0035) approval and informed consent. Fatty acid and amino acid contents were measured in milk from individual donors and donor pools (pooled per Human Milk Banking Association of North America guidelines). Statistical comparisons were performed using Kruskal–Wallis, Spearman’s, or Multivariate Regression analyses with center as the fixed factor and lactational stage as co-variate. Results. Ten of the fourteen fatty acids and seventeen of the nineteen amino acids analyzed differed across Banks in the individual milk samples. Pooling minimized these differences in amino acid and fatty acid contents. Concentrations of lysine and docosahexaenoic acid (DHA) were not different across Banks, but concentrations were low compared to recommended levels. Conclusions. Individual donor milk fatty acid and amino acid contents are highly variable. Standardized pooling practice reduces this variability. Lysine and DHA concentrations were consistently low across geographic regions in North America due to lactational stage of the milk, and thus not adequately addressed by pooling. Targeted supplementation is needed to optimize PDM, especially for the preterm or volume restricted infant.
Keywords:
preterm infants; human milk; nutrition; donor milk; DHA; lysine

The American Academy of Pediatrics (AAP) [1] and the World Health Organization (WHO) [2] recommend mother’s own human milk feeding because of immunological benefits which lessen disease in the high-risk neonate [3,4]. Epidemiological investigations have determined that feeding mother’s own milk decreases the likelihood of necrotizing enterocolitis and late-onset sepsis in preterm infants [4,5,6], resulting in shorter hospital stays and decreased cost of care [7,8]. When mother’s own milk is not available, pasteurized donor milk (PDM) is used as a reasonable alternative for the preterm infant [9,10,11,12,13]. To achieve this practice, mother’s own milk is often augmented with pasteurized donor milk [14]. In fact, recent retrospective work demonstrated cost effectiveness in the intensive care unit that optimized human milk feeding [15]. However, a major gap in knowledge is the nutritional consequences of feeding infants with low volumes of PDM that is often provided by mothers feeding older term infants who consume much greater quantities of milk and receive food sources at 4–6 months [16]. Furthermore, whether from the mother or donor, specific human milk components can be influenced by maternal diet [17]. The reality is that many preterm infants fed even fortified human milk may demonstrate growth, meeting specified weight goals, but 43% are still documented as small for gestational age and are in the lower growth percentiles at discharge—unlike their term counterparts [18,19,20]. Most concerning is that growth failure—particularly linear velocity—is associated with neurodevelopmental morbidities [21,22,23]. In addition, a recent multi-site trial randomly assigning infants to donor milk or preterm formula did not find developmental advantages [24]. Consequently, understanding the nutrient characteristics of pooled human milk is essential to improving fortification strategies.
The composition of human milk changes throughout the course of lactation as the infant matures, and these changes are consistent with infants consuming increasing quantities of milk and ingesting other food sources [25,26]. Consequently, the nutrient composition of most PDM alone is not considered adequate to meet the needs of the preterm or volume-restricted infant due to the late lactational stage of the donor milk, which is nutritionally less concentrated than early milk [27,28], and there is consensus that PDM requires fortification [29,30,31,32]. Furthermore, a recent meta-analysis of term and preterm human milk composition confirmed that human milk is profoundly variable [33]. There are a multitude of factors that may contribute to this variability, including stage of lactation, diurnal cycles, exposure to environmental contaminants such as cigarette smoke, and the treatment of expressed milk (i.e., storage, containers, or tubing delivery) [33,34,35]. While many of these variables are normalized in mother’s own milk fed consistently around the clock and for months, milk obtained for donation is subject to the circumstances at that time. Expert opinion suggests more research is needed in the area of donor milk and fortification [11]. As a starting point to address the most basic elements in donor milk composition, we chose to measure fatty acid and amino acid contents. The purpose of this study was to determine the variability in fatty acid and amino acid composition in individual and pooled PDM using current pooling practices in place at milk banks compliant with Human Milk Banking Association of North America (HMBANA) guidelines, specifically for protein (0.7–1.0 g/100 mL) and caloric contents (67–81 kcal/100 mL) [36].

This is a prospective cross-sectional sampling of human milk from five HMBANA member milk banks: California, Colorado, Texas-Ft Worth, Michigan, and Ohio. Prospective enrollees were mothers donating to milk banks between December 2008 and June 2010. Participants were enrolled after Institutional Review Board approval and informed consent of the human milk donors. Milk samples from 15 to 16 individual mothers per Bank were collected from December 2008 through November of 2010. Collected samples were pasteurized, and 1 mL was removed and immediately stored at −80 °C for laboratory measurements. The remaining milk was pooled into five pools per bank to meet the required caloric content and protein concentrations following HMBANA guidelines [37]. The samples were shipped frozen to Nationwide Children’s Hospital, Columbus, OH, USA and stored at −80 °C until analyzed.

Statistical comparisons were performed using Kruskal–Wallis for the demographic data (Table 1). Fatty acid and amino acid contents were compared across Centers with multivariate analysis of variance using a linear regression model. Results of the multivariate tests are reported in the figure legends, and coefficient of variation (adjusted R2) and the between-subject differences (p-values) are reported within the graph. All milk composition data were analyzed using lactational stage as a co-variate. Correlations between lactational stage and amino acids or fatty acids were performed by Spearman’s correlation. Statistical significance was set at p < 0.05 for all analyses.

Women currently donating to HMBANA member banks were included in this study. Prior to donating, the participants received rigorous medical, dietary, and laboratory screening. No women refused participation. There were 16 women enrolled from California and Texas, and 15 women enrolled from each site in Colorado, Michigan, and Ohio. Participant median ages across Centers were 31.5–33.5 years (range 20–42 years) and median lactational stages were 1–5.5 months (range 0–13 months) (Table 1).

After caloric content and protein measurements were performed in the individual samples, the milk samples at each individual site were pooled to achieve an overall caloric content of 67–81 kcal per 100 mL and an overall total protein content of 0.7–1 g per 100 mL. Protein-to-calorie ratio with these combinations reaches 3.3 with standard fortification; however, baseline assumptions may change with mother’s lactational stage.
Fatty acid analysis of the individual samples revealed substantial differences across Banks in all fatty acids ranging from C16:0 to C20:5ω3 (Figure 1 and Table S1). Fatty acid analysis of the pooled samples indicated no differences between Centers (Table 2); however, the average docosahexaenoic acid (DHA) concentration in all samples was 7.1 mg/100 mL, which is substantially lower than the 65 mg/100 mL (0.8 mol %) required to match fetal accretion concentrations (based on intakes of 150 mL/kg/day) [38].
The composition of human milk is highly dependent upon lactational stage, which was highly significant in the multivariate regression analyses. Consequently, we analyzed both amino acids and fatty acids for correlation with lactational stage in individual and in pooled samples. In the individual samples, all amino acids were negatively correlated with lactational stage (p ≤ 0.006), but these correlations were no longer significant after the samples were pooled (p ≥ 0.131). Only the fatty acids eicosapentaenoic acid (EPA, 20:5ω3) (p = 0.029) and docosahexaenoic acid (DHA, 22:6ω3) (p = 0.025) were significantly correlated with lactational stage in the individual samples, and these correlations were no longer significant after the samples were pooled (p = 0.819 and p = 0.690, respectively).

The occurrence of failure to thrive currently witnessed in many infants fed PDM is concerning [18], and requires a further examination as to the adequacy of PDM as a sole source of nutrition. Our data indicate that individual PDM is highly variable, and that pooling lessens this variability; however, infants fed pooled PDM may still experience nutritional differences that may affect their overall growth. Our data supports the observed insufficiency of DHA and now lysine contents in most human milk across the United States and the need for supplementation—specifically in the case of the preterm infant. These findings support further studies on personalized maternal and infant supplementation strategies to meet the needs of high-risk infants receiving PDM [51].

The authors would like to acknowledge the help and participation of the Human Milk Banking Association of North America and the donating mothers for sharing their milk.

The authors have no conflict of interest. Dr. Valentine is currently an Associate Professor at The University of Cincinnati, Cincinnati Ohio and Medical Director of Mead Johnson Nutrition, Evansville, IN, USA. 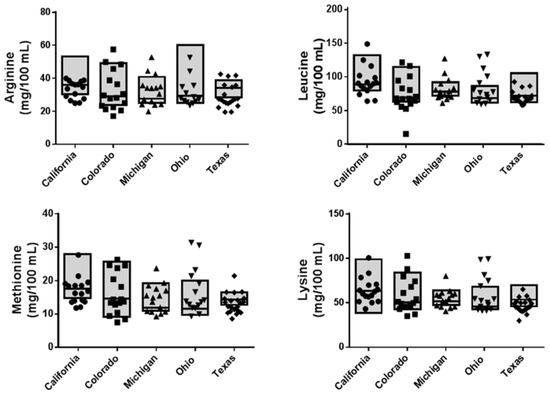 Table 3. Amino acid levels in pooled samples obtained from Regional Milk Banks.
Data were analyzed by multivariate regression with Banks as the fixed variable and lactational stage as a co-variate. Multivariate tests (Pillai’s Trace) revealed no statistical differences between Banks or lactational stage across the model. Between-subject effects are indicated on the table. Data are representative of five pooled samples perBank; med = median. Data in gray indicates statistical significance at 0.05.