Fructose and NAFLD: The Multifaceted Aspects of  Fructose Metabolism

Gastric emptying is a rate-limiting step in the delivery and absorption of nutrients and fluids in the small intestine. Therefore, the rate at which nutrients empty from the stomach directly affects the period of gastric distension and nutrient sensing. Gastric distension causes both satiation and satiety [1] and a prolonged period of gastric distension due to delayed emptying may lead to a prolonged satiety period. A number of hormones secreted from the gastrointestinal tract involved in appetite regulation have also been to shown to influence gastric emptying rate. Ghrelin, the only orexigenic hormone, accelerates gastric emptying rate [2,3] whilst satiety hormones such as glucagon-like peptide-1 (GLP-1), peptide tyrosine tyrosine (PYY), and cholecystokinin (CCK) inhibit gastric emptying rate [4,5,6,7,8].
The gastrointestinal tract has been shown to be a highly adaptive organ. Gastric emptying in humans has been shown to be influenced by previous dietary intake. Increases in the gastric emptying rate of a high-fat test meal following three days of a high-fat diet [9] and increases in the gastric emptying rate of a glucose test solution following 3 days of high glucose intake [10,11] have been shown. More recently, three days of dietary fructose supplementation has been shown to result in a monosaccharide specific acceleration of a fructose solution but not a glucose solution [12]. One potential mechanism for this adaptation is an alteration in gastrointestinal hormone response.
A small number of studies that have investigated the effects of previous dietary intake on gut hormone responses in humans have shown changes in the secretion of gut-derived hormones. Most of this work to date has been conducted on the effects of a high-fat diet, however, and few have simultaneously measured gastric emptying rate. Following the observations by Cunningham et al. [13] where emptying rate of a fatty meal was accelerated as a result of a high-fat diet for two weeks, it was reported that a high-fat diet resulted in an increase in postprandial CCK concentration [14]. Fasting levels of CCK have also been shown to be altered in humans following three weeks of a high-fat diet compared to an isoenergetic low-fat diet [15]. The effect of a high-fat diet has also been shown by others to suppress postprandial ghrelin response to a greater extent [16], but result in unaltered fasting concentration and postprandial response for GLP-1 [17].
With regards to increased dietary intake of carbohydrates, increased glucose ingestion for 4–7 days resulted in accelerated gastric emptying of glucose and fructose solutions but differential gut hormones responses [11]. Greater glucose-dependent insulinotropic polypeptide (GIP) hormone responses were observed following the glucose-supplemented diet for both sugar solutions [11]. However, insulin response was greater following glucose ingestion but unchanged following fructose ingestion in the glucose-supplemented trials [11]. In addition, it followed that glycaemic response was lower for glucose ingestion but not for fructose ingestion following glucose supplementation [11]. The only study to our knowledge that has investigated the effects of increased fructose consumption on gut hormones showed that two weeks of a high-fructose diet in rats increased fasting ghrelin levels by 40% [18]. The effect of increased fructose consumption over a shorter period of time on moderations of postprandial gut hormone responses in relation to adaptations of gastric emptying rate in humans is unknown. Therefore, the aim of this study was to investigate the effect of a short-term increase in dietary fructose ingestion on gastric emptying rate and associated gastrointestinal hormone responses in healthy men.

Ten healthy men (mean ± standard deviation, age 26 ± 7 years, height 179.0 ± 6.3 cm, body mass 81.2 ± 11.1 kg, body mass index 25.3 ± 3.1 kg·m−2, and estimated body fat 23.2% ± 8.1%) volunteered to take part in this investigation. All participants were non-smokers, had no history of chronic gastrointestinal disease, were not consuming medication with any known effect on gastrointestinal function and had no medical conditions as assessed by a medical screening questionnaire. The participants provided written informed consent prior to participation and ethical approval was provided via the Institutional Ethical Advisory Committee (Reference: SE111228).

Experimental trials were conducted in a single-blind, randomised, crossover fashion commencing between 0800 and 0900 h following an overnight fast from 2100 h with the exception of drinking 500 mL of water approximately 90 min before arrival at the laboratory. Participants reported to the laboratory on four occasions to complete four experimental trials; fructose with supplementation (FS), fructose with water control (FC), glucose with supplementation (GS) and glucose with water control (GC) as previously conducted by Yau et al. [12]. Experimental trials were separated by a minimum period of 7 days. A 3-day dietary and physical activity maintenance period preceded each experimental trial. Participants were asked to record their diet and physical activity prior to their first trial then to replicate them in the remaining three trials. The purpose of this was to ensure standardisation and consistency of macronutrient intake and metabolic status in the days leading up to each trial. Furthermore, participants were asked to refrain from alcohol and caffeine consumption and the performance of strenuous physical activity in the 24 h preceding each experimental trial. In addition to their normal dietary intake, participants were asked to consume either four 500 mL bottles of water (control trials) or four 500 mL solutions, each containing 30 g fructose (supplement trials) per day over the 3-day dietary maintenance period. Participants were instructed to consume these drinks evenly throughout the day in between meals.
Upon arrival at the laboratory, participants were asked to completely empty their bladder into a container from which a 5 mL urine sample was retained for later analysis of osmolality. Body mass was subsequently recorded before an intravenous cannula was inserted into an antecubital vein. This remained in place for the duration of the experimental trial and was kept patent with infusion of saline after each blood sample collection. A baseline 5 mL blood sample was collected before participants ingested 595 mL of a fructose solution (36 g dissolved in water and prepared to a volume of 600 mL) or an equicaloric glucose monohydrate solution (39.6 g dissolved in water and prepared to a volume of 600 mL). A 5 mL sample of the test solutions was retained for osmolality analysis. Participants were given a maximum of two minutes to consume the test solution and instructed to consume it as quickly as they were able to. Participants remained in a semi-supine position for 60 min following drink ingestion where further blood samples were collected at 10, 20, 30, 45 and 60 min post ingestion. Ratings of appetite (hunger, fullness, prospective food consumption) were assessed at baseline and at 10-min intervals following drink ingestion for 60 min using a 100-mm visual analogue scale (VAS). Following the last sample collection the cannula was removed before participants left the laboratory.

Gastric emptying was assessed using the 13C-acetate breath method as described in Yau et al. [12]. Prior to ingestion of the fructose or glucose test drink containing 100 mg 13C-sodium acetate (Cambridge Isotope Laboratories Inc., Andover, MA, USA), a basal end-expiratory breath sample was collected. Further end-expiratory breath samples were collected at 10-min intervals over a period of 60 min following drink ingestion. Breath samples were collected into a 100-mL foil bag on each occasion by exhalation through a mouthpiece. Bags were then sealed with a plastic stopper and stored for later analysis.
Breath samples were analysed by non-dispersive infra-red spectroscopy (IRIS, Wagner Analyzen-Technik, Bremen, Germany) for the ratio of 13CO2:12CO2. The differences in the ratio of 13CO2:12CO2 from baseline breath to post breath samples are expressed as delta over baseline (DOB). Half emptying time (T½) and time of maximum emptying rate (Tlag) were calculated using the manufacturer’s integrated software evaluation embedded with the equations of Ghoos et al. [19]. Each participant’s own physiological CO2 production assumed as 300 mmol CO2 per m2 body surface per hour was set as default and body surface area was calculated by the integrated software according to the formula of Haycock et al. [20].

In conclusion, the results of this study show that three days of dietary supplementation with 120 g fructose per day results in an accelerated gastric emptying rate of a fructose solution but not a glucose solution. This monosaccharide specific adaptation may be partly explained by moderations of ghrelin secretion, though larger participant numbers may be required to elucidate clearer differences in gut-derived hormone responses following supplementation. The adaptability of the gut and the mechanisms responsible for this should be further investigated with both short- and longer-term studies, along with the subsequent effects on food intake.

The authors would like to acknowledge Dave Maskew of Manchester Metropolitan University for his technical support in the laboratory; and the staff at Salford Royal Hospital’s Gastrointestinal Physiology department for their co-operation with breath sample analysis. A.M.W.Y. was supported by a Manchester Metropolitan University Ph.D. studentship. This research received no specific grant from any funding agency in the public, commercial or not-for-profit sectors. 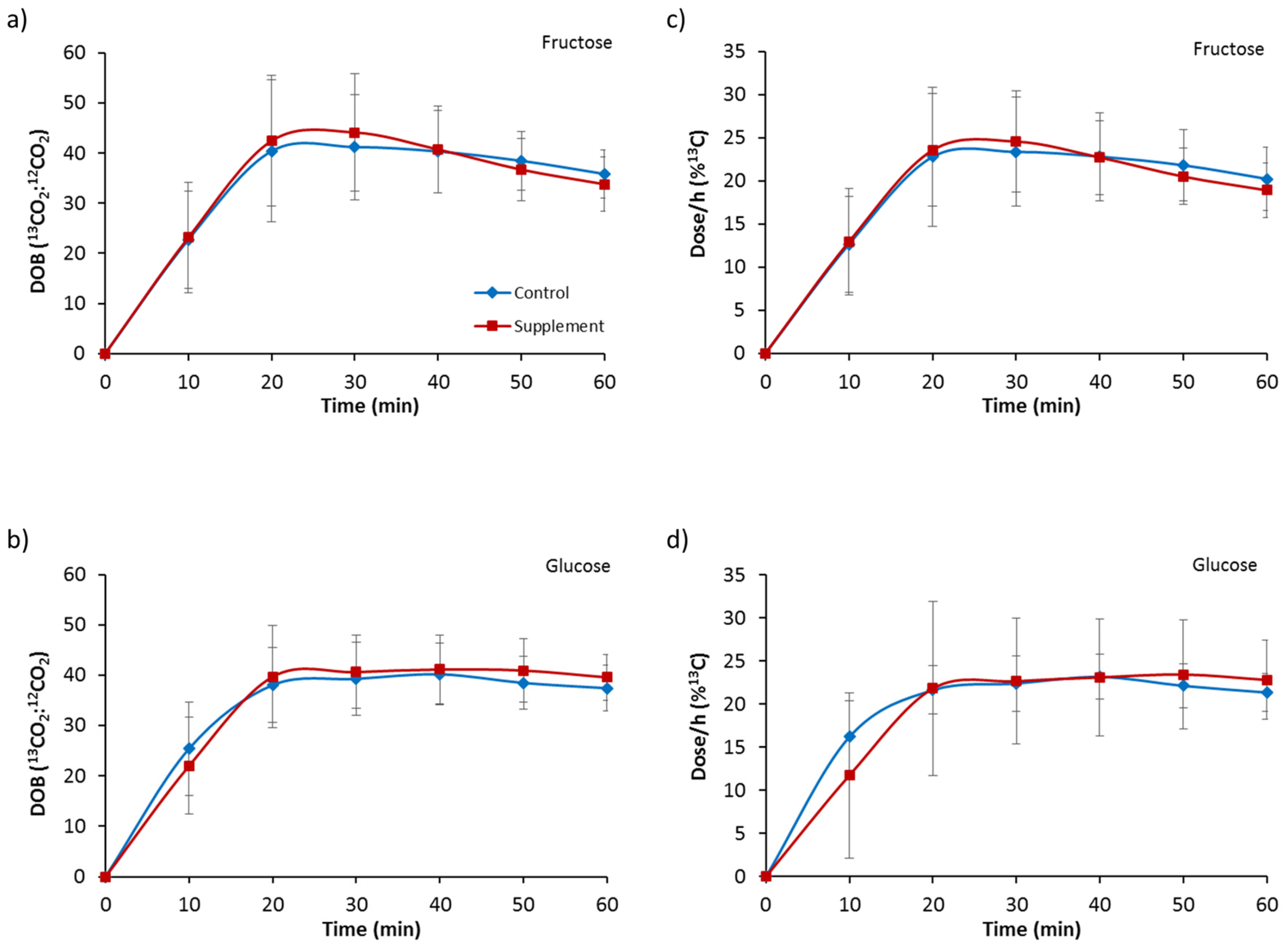 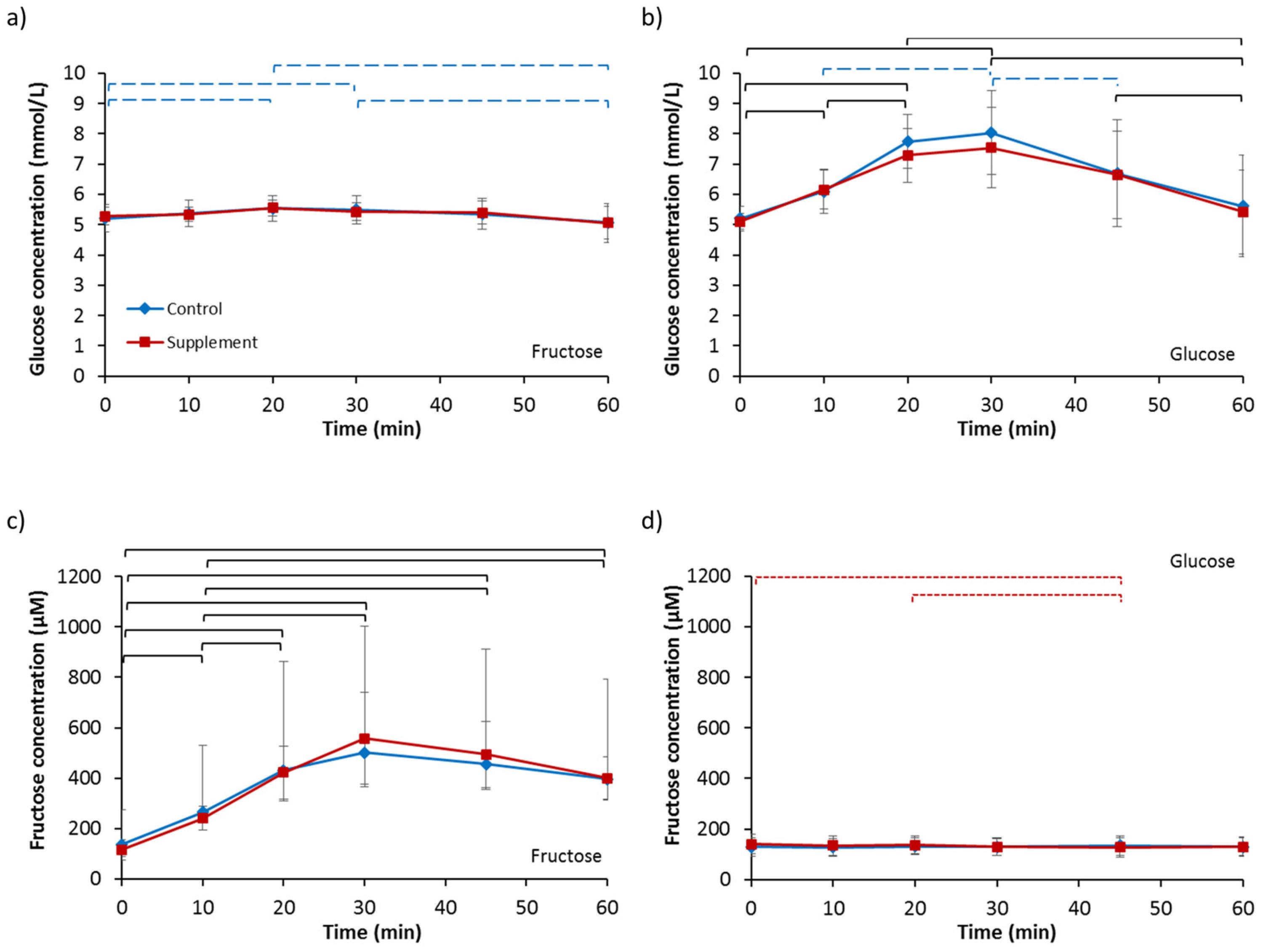 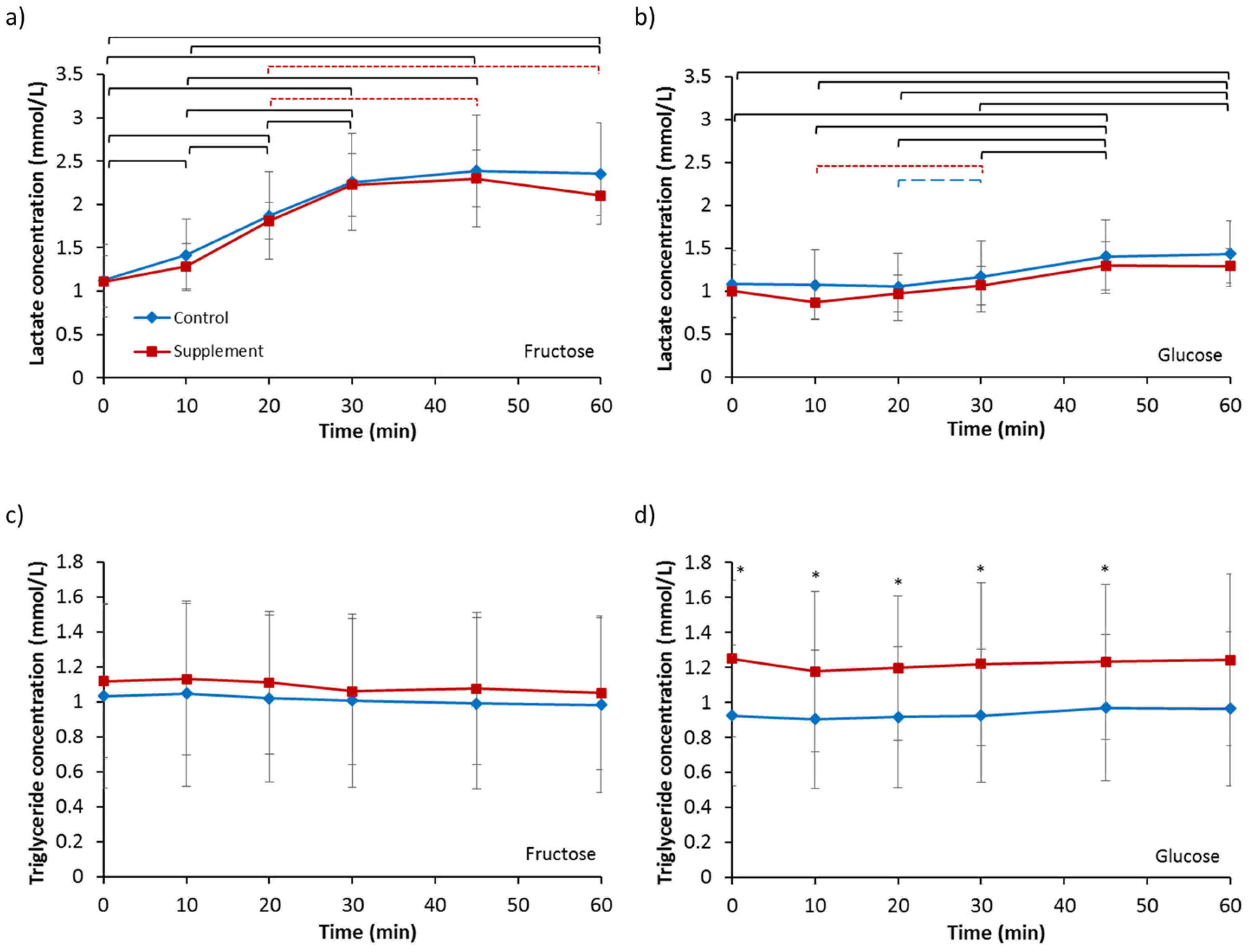 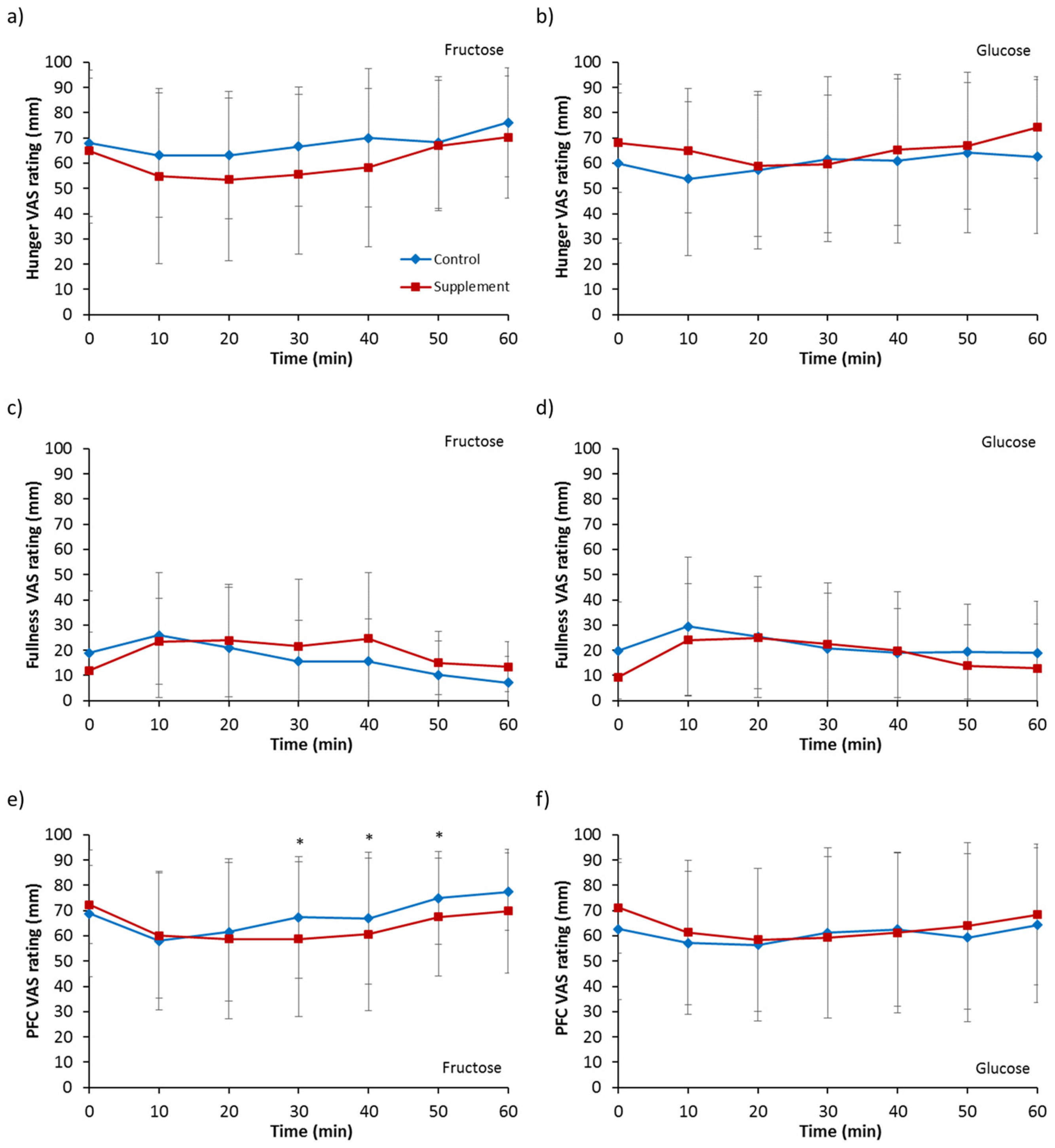