Early Nutritional Interventions for Brain and Cognitive Development in Preterm Infants: A Review of the Literature

Elderly people have increased susceptibility to infections and cancer that are associated with decline in cellular immune function. The objective of this work was to determine the efficacy of Bifidobacterium (B.) animalis ssp. lactis HN019 (HN019) supplementation on cellular immune activity in healthy elderly subjects. We conducted a systematic review of Medline and Embase for controlled trials that reported polymorphonuclear (PMN) cell phagocytic capacity or natural killer (NK) cell tumoricidal activity following B. lactis HN019 consumption in the elderly. A random effects meta-analysis was performed with standardized mean difference (SMD) and 95% confidence interval between probiotic and control groups for each outcome. A total of four clinical trials were included in this analysis. B. lactis HN019 supplementation was highly efficacious in increasing PMN phagocytic capacity with an SMD of 0.74 (95% confidence interval: 0.38 to 1.11, p < 0.001) and moderately efficacious in increasing NK cell tumoricidal activity with an SMD of 0.43 (95% confidence interval: 0.08 to 0.78, p = 0.02). The main limitations of this research were the small number of included studies, short-term follow-up, and assessment of a single probiotic strain. In conclusion, daily consumption of B. lactis HN019 enhances NK cell and PMN function in healthy elderly adults.
Keywords: aging; Bifidobacterium; elderly; immunity; probiotic aging; Bifidobacterium; elderly; immunity; probiotic

Globally, elderly people represent the fastest growing population. Older individuals have typically weaker immune responses to vaccination and elevated risk for infections, certain autoimmune diseases, and cancer [1]. Many of these health risks are a consequence of declining immune function associated with the aging process, i.e., immunosenescence [2]. Traditional hallmarks of immunosenescence include adaptive immunity components such as lower number and/or proportions of peripheral blood naïve T cells (cluster of differentiation 8 (CD8+)), increased number of memory/effector cytotoxic T cells (CD8+) [3], as well as altered capacity of peripheral blood T cells to proliferate and secrete cytokines [1]. Furthermore, B-cell function and quantity appear to decline with age [4]. Age-related alterations have also been reported for innate immune system and specifically for function of neutrophils and natural killer (NK) cells. Neutrophils, which are important for early immune response for infections, show decreased chemotaxis, phagocytic activity, and declined superoxide generation in the elderly [5,6]. Polymorphonuclear (PMN) cells in the blood are mostly neutrophils (90%–95%), together with smaller fraction of eosinophils and basophils. The number of NK-cells increases with age, but their signaling efficiency, cytokine production, and up regulation of co-stimulatory molecules is suboptimal, leading to a net decrease in function [7,8,9]. It has been suggested that underlying defect of the declined innate cellular function in the elderly may be a result of decreased sensitivity of toll like receptor (TLR) signaling that is important in recognizing microbial structures [10]. These changes in immune function may compromise the early recognition and elimination of virus infected and malignant cells [2].
Gut microbiota plays an important role in immunosenescence and is influenced by physiological aging process, lifestyle, and diet [11,12,13,14]. It has been shown that aging gut microbiota has specific features compared to microbiota of younger adults—like lower levels of bifidobacteria and higher levels of Bacteroidetes spp. [12,14]. The above changes in microbiota composition may be indicative of dysbiosis and poorer health. For instance, lower bifidobacteria levels have been found to associate with increased risk of Clostridium difficile associated diarrhea [15], hospitalization [16], antibiotic treatment [17], and frailty [18]. Thus, targeted dietary interventions that restore composition of the microbiota could reduce the risk of age related morbidities and improve the quality of the life of the elderly.
It has been suggested that probiotic bacteria could have potential for improving immune system function in the elderly [19]. Probiotics are known to interact with TLRs and other microbial pattern recognition receptors on immune system cells in intestinal mucosa and thus directly influence their functions [20]. Furthermore, specific probiotic strains may induce beneficial changes in the gut microbiota that have an impact on immune status. For instance, B. longum strains induced changes in the bifidobacteria population, which correlated with tumor necrosis factor (TNF)-α and interleukin (IL)-10 levels in plasma [21], and Lactobacillus (L.) casei and L. plantarum strains improved influenza virus vaccination responses in the elderly [22,23]. Although there are some clinical trials investigating probiotics and their effectiveness in improving immune responses in the elderly [19], systematic information on strain-specific effects of probiotics on the immunity in this population is lacking. One of the probiotics applied in clinical studies in this area is Bifidobacterium (B.) animalis ssp. lactis HN019. The objective of this systematic review and meta-analysis of controlled studies was to evaluate the effect of B. lactis HN019 versus non-probiotic control on cellular innate immune activity of healthy elderly subjects.

The study was performed according to the Preferred Reporting Items for Systematic Reviews and Meta-Analyses (PRISMA) [24]. Medline and Embase databases were searched for randomized or non-randomized controlled studies published in English-language journals that reported PMN cell phagocytosis activity or NK cell tumoricidal activity following B. lactis HN019 consumption in reportedly healthy, elderly (≥60 years) adults. No date restrictions were applied to the searches. The details of the Medline search strategy are listed in Table 1. The syntax for Embase was similar, but adapted as necessary. Additionally, manual searches were conducted using the Directory of Open Access Journals, Google Scholar, and the reference lists of included papers and relevant meta-analyses. The final search was conducted in June 2016.

One reviewer selected studies for inclusion in the review. Articles were then independently assessed by a second reviewer, who confirmed eligibility. Titles and abstracts were initially screened to exclude non-English manuscripts, review articles, commentaries, letters, case reports, animal studies, and obvious irrelevant studies. Full-texts of the remaining articles were retrieved and reviewed.

A random effects meta-analysis model was developed based on the a priori assumption that treatment effects would be heterogeneous among studies. For each outcome, a pooled standardized mean difference (SMD) and 95% confidence interval were calculated. For reference, SMD values of 0.2, 0.5, 0.8, and 1.0 are defined as small, medium, large, and very large effect sizes, respectively [25]. Forest plots were used to illustrate individual study findings and pooled meta-analysis results. Heterogeneity of effects across studies was planned to be estimated using the I2 statistic if at least 10 studies were included in the meta-analysis. p-values were two-sided with a significance level <0.05. Statistical analyses were performed using Comprehensive Meta-analysis version 2.2 (Biostat, Englewood, NJ, USA).

The findings from this meta-analysis suggest that daily short-term consumption of probiotic B. lactis HN019 enhances PMN phagocytic capacity and NK cell tumoricidal activity in healthy elderly adults. As the health of the elderly was not assessed in the original studies, the correlation between B. lactis HN019 mediated PMN and NK cell activity improvement and resistance to infection and diseases remains to be confirmed in future trials.

We thank Angela Zimmermann for systematic review assistance. This work was supported by DuPont Nutrition and Health.

L.E.M. is a consultant to Bio-K Plus, DuPont, Fonterra, Natren, and United Agricultural Services (UAS) Laboratories; L.L. and M.J.L. are employees of DuPont Nutrition and Health. 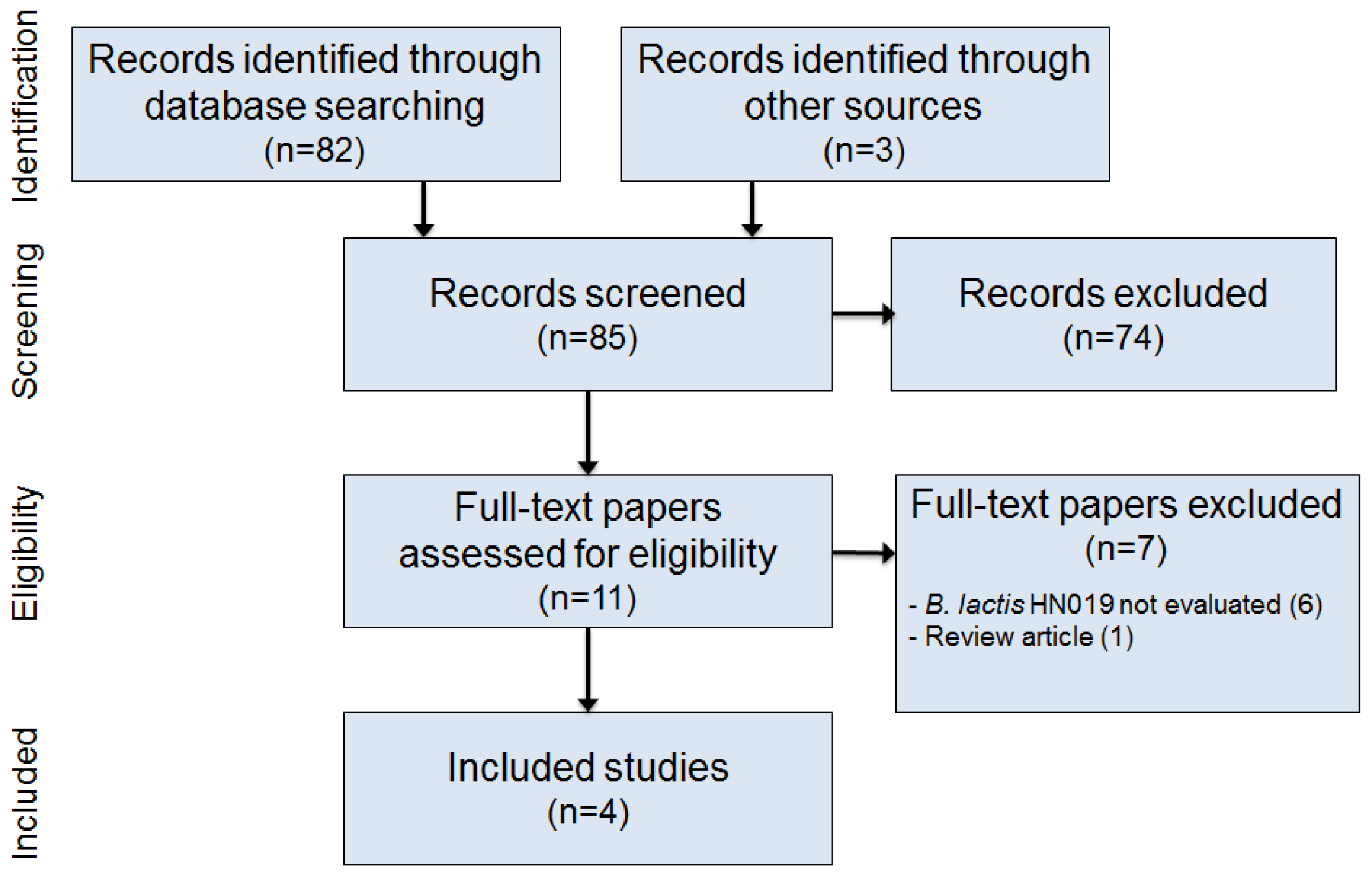