There is a growing body of evidence documenting probiotic bacteria to have a beneficial effect to the host through their ability to modulate the mucosal immune system. Many probiotic bacteria can be considered to act as either immune activators or immune suppressors, which have appreciable influence on homeostasis, inflammatory- and suppressive-immunopathology. What is becoming apparent is the ability of these probiotics to modulate innate immune responses via direct or indirect effects on the signaling pathways that drive these activatory or suppressive/tolerogenic mechanisms. This review will focus on the immunomodulatory role of probiotics on signaling pathways in innate immune cells: from positive to negative regulation associated with innate immune cells driving gut mucosal functionality. Research investigations have shown probiotics to modulate innate functionality in many ways including, receptor antagonism, receptor expression, binding to and expression of adaptor proteins, expression of negative regulatory signal molecules, induction of micro-RNAs, endotoxin tolerisation and finally, the secretion of immunomodulatory proteins, lipids and metabolites. The detailed understanding of the immunomodulatory signaling effects of probiotic strains will facilitate strain-specific selective manipulation of innate cell signal mechanisms in the modulation of mucosal adjuvanticity, immune deviation and tolerisation in both healthy subjects and patients with inflammatory and suppressive pathology. View Full-Text
Keywords: probiotics; innate; epithelial cells; dendritic cells; neutrophils; macrophages; signaling; immunomodulation; cytokines; inflammation probiotics; innate; epithelial cells; dendritic cells; neutrophils; macrophages; signaling; immunomodulation; cytokines; inflammation
►▼ Show Figures 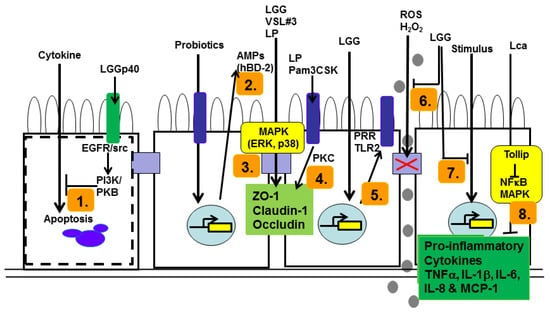