Trends and Predictors of Prelacteal Feeding Practices in Nigeria (2003–2013)

Aging is due to an accumulation of detrimental changes overtime at both the molecular and cellular levels, which ultimately leads to a functional decline at the tissue and organ level. Although the etiology of aging has not been fully understood, several cellular and molecular hallmarks may contribute to this process. Cellular senescence can be induced by telomere shortening, activation of tumor suppressor genes and oncogenes, chronic inflammation, oxidative stress, and ultraviolet (UV) irradiation [1,2]. Cells undergoing senescence are associated with a rise in intracellular reactive oxygen species (ROS) [3], as well as hyperactivity of the transcription factor nuclear factor (NF)-κB and over-expression of inflammatory cytokines such as TNF-α, IL-1β, and IL-6 [4,5]. Therefore, oxidative stress and chronic inflammatory process are major risk factors underlying aging and age-related diseases [3,6].
Aging of the skin is a complex biological phenomenon consisting of two components: intrinsic aging and photoaging caused by environmental exposure, primarily to UV radiation [7]. UV irradiation is the most common environmental factor that damages the human skin, leading to conditions such as skin carcinogenesis, inflammation, solar erythema and premature senescence [7]. Excessive exposure to UV irradiation generates ROS in skin [8], and leads to the activation of transcription factors that induces the expression of pro-inflammatory cytokines and metalloproteinase (MMPs) [7] resulting cellular senescence. Collagen-degrading MMP-1 is upregulated and serves as the primary MMP in UV-exposed skin [7]. Therefore, excessive degradation of collagen and matrix by UV-induced MMPs is a characteristic feature of photo-damaged skin, and MMP is used as a major marker of UVB-induced photoaging as well as skin inflammation.
For a number of years, the occurrence of senescence in vivo has been questioned, due mainly to the lack of specific markers. In 1995, Dimri and colleagues reported that several types of human senescent cells expressed a β-galactosidase that was detectable by a histochemical assay [9]. Senescence-associated β-galactosidase (SA-β-gal) is a hydrolase enzyme that catalyzes the hydrolysis of β-galactosides into monosaccharides only in senescent cells, and age-dependent increase in SA-β-gal staining was observed in human skin [9].
Sirtuins (silent mating type information regulation 2 homolog, SIRTs) are a family of NAD(+)-dependent enzymes and well-known modulators of lifespan in many species [10]. SIRTs have a role in gene repression, metabolic control, apoptosis and cell survival, DNA repair, development, inflammation, and healthy aging [11,12]. To date, seven human sirtuins have been identified and named SIRT1-7 [13], and expression of all seven sirtuins has been demonstrated in human epidermal and dermal cells [14]. SIRT1 is the most extensively studied human sirtuin, and UV irradiation downregulates SIRT1 expression in cultured skin keratinocytes [15].
Garlic has long been used widely not only as a flavoring agent but also as a folk medication and is one of the most well-known herbal medicines worldwide. Numerous therapeutic effects of garlic and its constituents such as antioxidant, anti-microbial, anti-atherosclerotic, anti-diabetic, anti-mutagenic, anti-carcinogenic and immunomodulatory activities have been reported [16,17,18,19,20]. However, the effects of garlic on anti-senescence activity in photoaging process have not yet been elucidated. The present study examined the inhibitory activity of garlic against cellular senescence and skin aging in the UV-exposed human keratinocyte cell line, HaCaT.

Fresh garlic (Allium sativum L.), purchased from Seosan (Chungnam, Korea) in July 2012, were peeled, vacuum dried, and powdered. The samples were extracted with 80% ethanol at 65 °C for 5 h, filtered through a 0.45 µm filter (Osmonics, Minnetonka, MN, USA), and lyophilized.

DCFH-DA was used to detect ROS production in cells. Cells which had been treated with garlic extract (50 and 100 µg/mL) prior to UV irradiation were incubated with 20 μM DCF-DA for 30 min, and harvested after 24 h. ROS formation was analyzed by a fluorometer (TECAN, SER-NR 94572, Salzburg, Austria) using 485 nm of excitation and 530 nm of emission filters. ROS production was expressed as a percentage of the fluorescence of non-UV irradiated control.

HaCaT cells (5 × 106/well) were pretreated with garlic for 24 h, and exposed to UVB. The concentrations of IL-1β and IL-6 in the culture supernatants were measured by human IL-1β and IL-6 ELISA kits purchased from R&D systems (Minneapolis, MN, USA) following the manufacturer’s instructions. Briefly, the culture supernatants of HaCaT cells were collected and added to the antibody coated wells. After 1 h incubation at 37 °C, the wells were washed with PBS-Tween 20 (pH 7.4) (Sigma-Aldrich, St. Louis, MO, USA), and alkaline phosphatase conjugated antibodies were added and incubated for another 1 h. The wells were washed, substrate solution was added, and incubated for another 1 h. The relative absorbance was measured at 450 nm and IL-1β and IL-6 concentrations were calculated using a standard curve.

Cells were cultured in 24-well plates (1 × 104 cells/well), pretreated with garlic, and exposed to UVB. Cells were washed with PBS and fixed for 5 min in 3% formaldehyde. SA-β-gal staining was determined using a Senescence β-galactosidase staining kit (Cell Signaling Technology, Danvers, MA, USA). A total of 100 cells were counted in three randomized fields, and the percentage of blue stained senescence cells was counted using light microscope.

Cell extracts were obtained by using a lysis buffer (1% Triton X-100, 150 mM NaCl, 20 mM Tris, pH 7.5 with protease inhibitors mix, Sigma-Aldrich), and SIRT1 activities were determined by Sirt1 activity kit (CS 1040, Sigma-Aldrich) according to the manufacturer’s protocol. The fluorescence of the plate was determined with an excitation wavelength of 360 nm and an emission wavelength of 450 nm. SIRT1 activity was expressed as a percentage of non-UV-irradiated control.

Each experiment was performed in triplicate and all data are presented as mean ± SD. Significant differences between groups were analyzed by ANOVA followed by the Duncan’s multiple range test (p < 0.05).

Since intracellular ROS levels are known to increase in cells during cellular senescence [22], ROS generation in response to UVB-exposed HaCaT cells was determined using the 2′,7′-dichlorodihydrofluorescein diacetate (DCFDA)–ROS detection assay. The ROS formation was evaluated after cells were irradiated at 100 mJ/cm2 of UVB irradiation. As shown in Figure 1B, ROS generation was markedly increased in UVB-irradiated HaCaT cells compared with non-irradiated control cells, representing massive oxidant generation. Pretreatment with garlic significantly attenuated an increase (p < 0.05) in intracellular ROS content, which was triggered by UVB irradiation. The ROS level was quenched by 29.4% at 50 µg/mL garlic treatment compared with UVB-irradiated control reaching saturation point. The dose–response effect was not observed. In non-UV treated HaCaT cells, garlic treatment at 100 µg/mL concentration slightly reduced the ROS formation in (Figure 1B). Taken together, the results mentioned above indicate that garlic protects keratinocytes from UV-induced oxidative stress by scavenging various free radicals.

The activity of the cellular senescence biomarker, SA-β-gal, in UVB-exposed HaCaT cells was examined by an SA-β-gal histochemical staining assay. The percentage of senescence cells in the non-UV irradiated HaCaT cells was low, and garlic treatment (100 µg/mL) slightly but significantly decreased SA-β-gal activity in non-UV exposed HaCaT cells (Figure 4). However, upon UVB irradiation, the percentage of SA-β-gal positive cells was increased in a dependent manner (data not shown). When cells were exposed to UVB (100 mJ/cm2), SA-β-gal activity markedly increased by 3.4-fold as compared with unexposed cells (Figure 4). Pretreatment with garlic at 50 and 100 µg/mL before UV exposure significantly inhibited the increase in SA-β-gal activity in a dose-dependent manner exhibiting 26.3% and 47.4% inhibition, respectively.

Since garlic treatment efficiently suppressed UV-induced increase in SA-β-gal levels in HaCaT cells, anti-aging effect of garlic was further investigated by measuring the SIRT1 activity, which has attracted attention as an anti-aging factor in recent years. As shown in Figure 5, the effect of garlic pretreatment on SIRT1 activity was not observed in non-UV irradiated control HaCaT cells. However, UV exposure suppressed SIRT1 activity by 43% compared to unexposed control cells, and pretreatment with garlic (50 µg/mL) significantly inhibited the UV-induced decrease in SIRT1 activity. The dose–response effect was not observed. The results suggest that garlic prevents UV-induced cellular senescence in terms of both SA-β-gal and SIRT1 activity.

Figure 6 shows the typical chromatogram profile of garlic extract used in the present study. Allicin, diallyldisulfide, and diallyl trisulfide, which have been reported as the most representative constituents of garlic, were determined. The concentrations of allcin, diallyldisulfide, and diallyl trisulfide were 141.9 ± 16.7, 1.6 ± 0.2, and 0.1 ± 0.01 mM, respectively.

The present study provides the first evidence that garlic protected HaCaT keratinocytes from UV-induced cell damage and cellular senescence as determined by expression of SA-β-gal and SIRT1 activity. The presence of garlic scavenges UVB-induced free radicals and reduces ROS generation in HaCaT keratinocytes, which, in turn, inhibits MMP-1 expression, pro-inflammatory cytokines productions, and the activities of senescence related biomarkers. Based on these characteristics, garlic could have good potential as an anti-aging material. However, it is important to note that the results of this study were based on experiments conducted using an in vitro cellular model. Accordingly, further studies using in vivo animal models should be conducted to elucidate the mechanism by which garlic prevents cellular senescence and demonstrates its inhibitory effects.

This work was supported by a grant from the 2015 Fundamental R&D Program of Hanseo University. 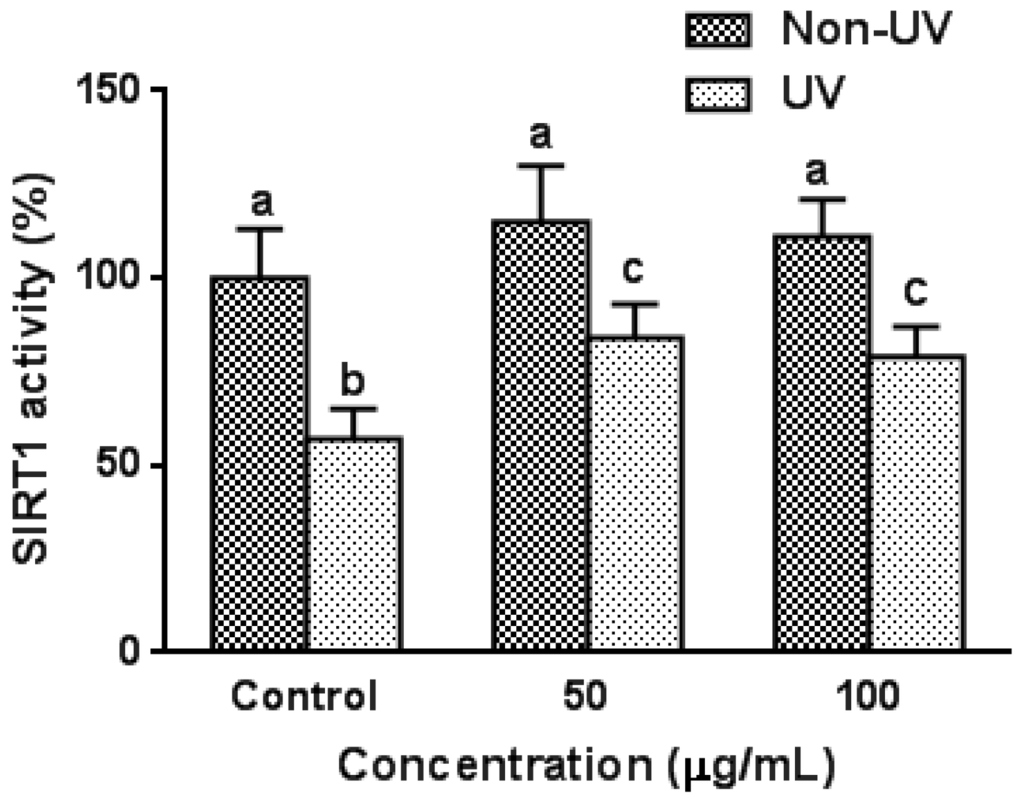