Protein Consumption and the Elderly: What Is the Optimal Level of Intake?
Previous Article in Journal

Biomarkers of Aging: From Function to Molecular Biology
Previous Article in Special Issue

:
Whey protein (WP) is characterized as a “fast” protein and caseinate (CA) as a “slow” protein according to their digestion and absorption rates. We hypothesized that co-ingestion of milk proteins (WP and CA) may be effective for prolonging the muscle protein synthesis response compared to either protein alone. We therefore compared the effect of ingesting milk protein (MP) to either WP or CA alone on muscle protein synthesis after exercise in rats. We also compared the effects of these milk-derived proteins to a control, soy protein (SP). Male Sprague-Dawley rats swam for two hours. Immediately after exercise, one of the following four solutions was administered: WP, CA, MP, or SP. Individual rats were euthanized at designated postprandial time points and triceps muscle samples collected for measurement of the protein fractional synthesis rate (FSR). FSR tended to increase in all groups post-ingestion, although the initial peaks of FSR occurred at different times (WP, peak time = 60 min, FSR = 7.76%/day; MP, peak time = 90 min, FSR = 8.34%/day; CA, peak time = 120 min, FSR = 7.85%/day). Milk-derived proteins caused significantly greater increases (p < 0.05) in FSR compared with SP at different times (WP, 60 min; MP, 90 and 120 min; CA, 120 min). Although statistical analysis could not be performed, the calculated the area under the curve (AUC) values for FSR following this trend were: MP, 534.61; CA, 498.22; WP, 473.46; and SP, 406.18. We conclude that ingestion of MP, CA or WP causes the initial peak time in muscle protein synthesis to occur at different times (WP, fast; MP, intermediate; CA, slow) and the dairy proteins have a superior effect on muscle protein synthesis after exercise compared with SP.
Keywords:
milk protein; whey protein; caseinate; soy protein; muscle protein synthesis

The swimming exercise protocol was a modification from that used in our previous study [27]. The rats were acclimated to swimming exercise by 30 min of pre-training two days before the experiment. One day before the experiment, the rats were fasted overnight. On the day of the experiment, the rats swam for two hours, with four rats swimming simultaneously in a barrel filled to a depth of 50 cm, providing an average surface area of 400 cm2 for each animal. The water temperature was maintained at a constant 35 °C during the swimming protocol. Immediately following exercise, one group of rats was killed (After-Ex, n = 8), while the other groups (n = 6~8 per group) were given oral administration of one of the following four test solutions: WP concentrate (Tatua Co-operative Dairy Co., Ltd., Morrinsville, New Zealand), caseinate (Fonterra Co-operative Group, Ltd., Auckland, New Zealand), MP concentrate (Fonterra Co-operative Group, Ltd., Auckland, New Zealand), or SP concentrate (Fuji Oil Co., Ltd., Osaka, Japan). The amino acid composition of each protein is shown in Table 1. The macronutrient composition of each protein is shown in Table 2. Each rat was administered an equal amount of protein (2.4 mL/100 g BW, 3.1 g protein/kg BW). The protein content of these preparations was measured by the Kjeldahl method [28].
Individual rats were euthanized at designated postprandial time points (30, 60, 90, 120, 180, and 240 min; n = 6~8) under isoflurane anesthesia, and the triceps muscle excised and stored at −80 °C until further use.

Fifteen minutes prior to sacrifice, a bolus dose (45 mg/kg BW, 22.5 mg/mL) of 2H-labeled phenylalanine ([2H5]Phe, Cambridge Isotope Laboratories, Inc., Tewksbury, MA, USA) was injected via the tail vein to measure the protein fractional synthesis rate (FSR). Fifteen minutes after the injection, the triceps muscle was excised and frozen rapidly. The elapsed time from injection until freezing was recorded as the actual time for incorporation of the labeled amino acid into protein.

The rate of protein synthesis in individual tissues was determined by measuring the incorporation of injected [2H5]Phe into muscle proteins. Determination of [2H5]Phe enrichment in plasma and hydrolyzed muscle protein samples was carried out using a modification of the procedure described by Bark et al. [30] using a LC/MS/MS system (TQD, Waters Corporation, Milford, MA, USA) and a 2.1 × 50 mm column with a particle size of 1.7 μm (ACQUITY UPLC BEH C18, Waters Corporation, Milford, CT, USA). The mobile phase A consisted of 0.05% trifluoroacetic acid (TFA) in Milli-Q water, and the mobile phase B, 0.05% TFA in acetonitrile. The initial eluent composition was 100% A, followed by an increase to 40% B for 9.0 min, 80% for 1.0 min, and then reduction to 100% of A for 3.0 min. The total running time was 12.0 min, eluent flow 0.3 mL/min, and column temperature 40 °C. The UV trace was recorded at 215 nm, with the analytes detected using electrospray ionization in the positive mode. Multiple-reaction-monitoring was performed using characteristic fragmentation ions (m/z 166.19 > 120.10) for Phe and (m/z 171.19 > 125.10) for [2H5]Phe. The parameters for the LC/MS/MS analysis were as follows: capillary voltage, 3000 V; source temperature, 120 °C; desolvation temperature, 400 °C; desolvation gas flow, 849 L/h; cone gas flow, 48 L/h; and cone voltage and collision energy set at 25 V and 15 eV, respectively. The fractional rates of protein synthesis (FSR), defined as the percentage of tissue protein renewed each day, were calculated according to the formula:
FSR = (Eb × 100)/(Ea × t)
where t was the time interval between injection and cooling of the tissue sample, expressed in days, and Eb and Ea were enrichment of [2H5]Phe in hydrolyzed tissue protein and muscle free amino acids, respectively.
The area under the curve (AUC) was calculated as the overall FSR for each protein treatment to obtain an estimate of the relative abilities of the proteins to stimulate muscle protein synthesis over time. 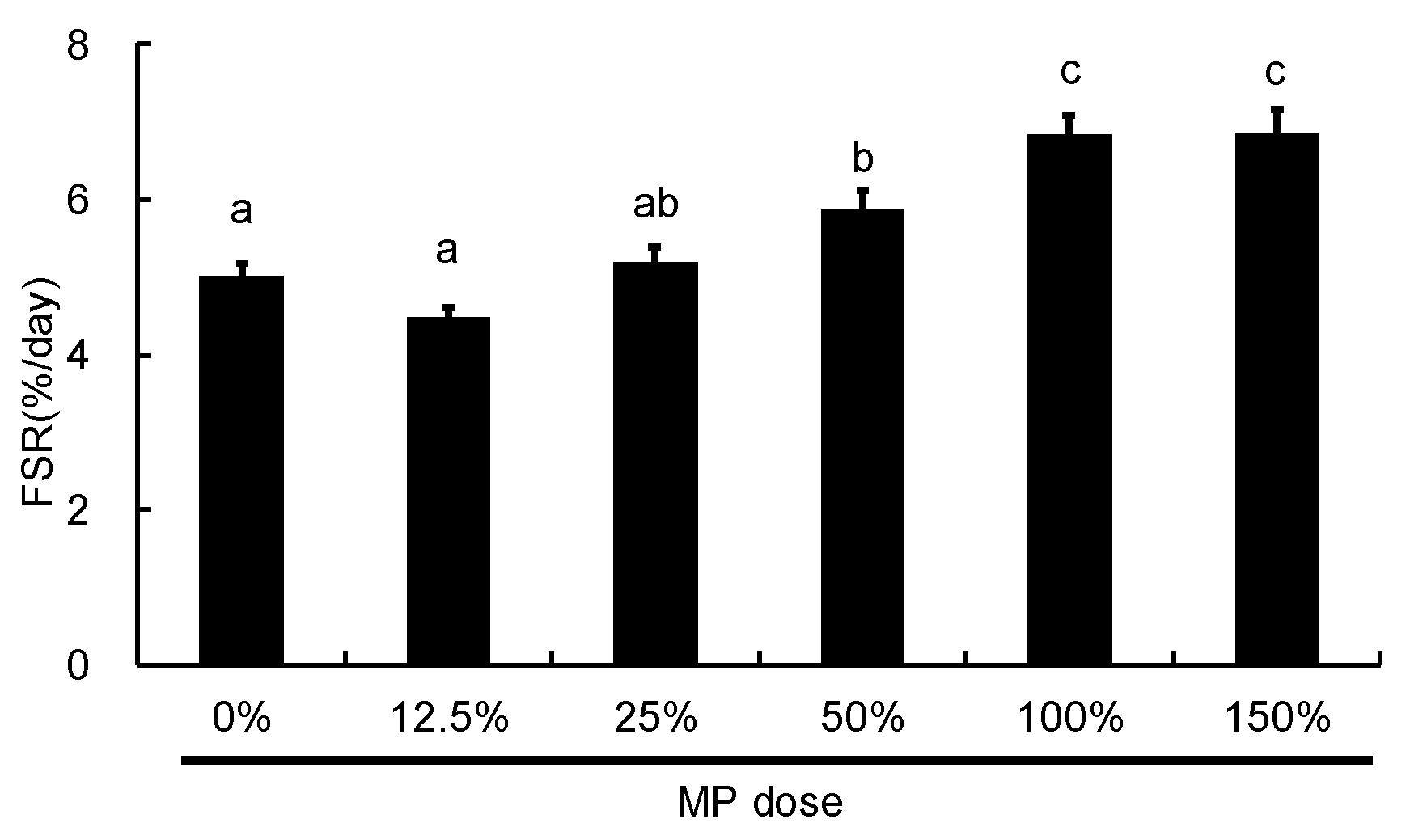 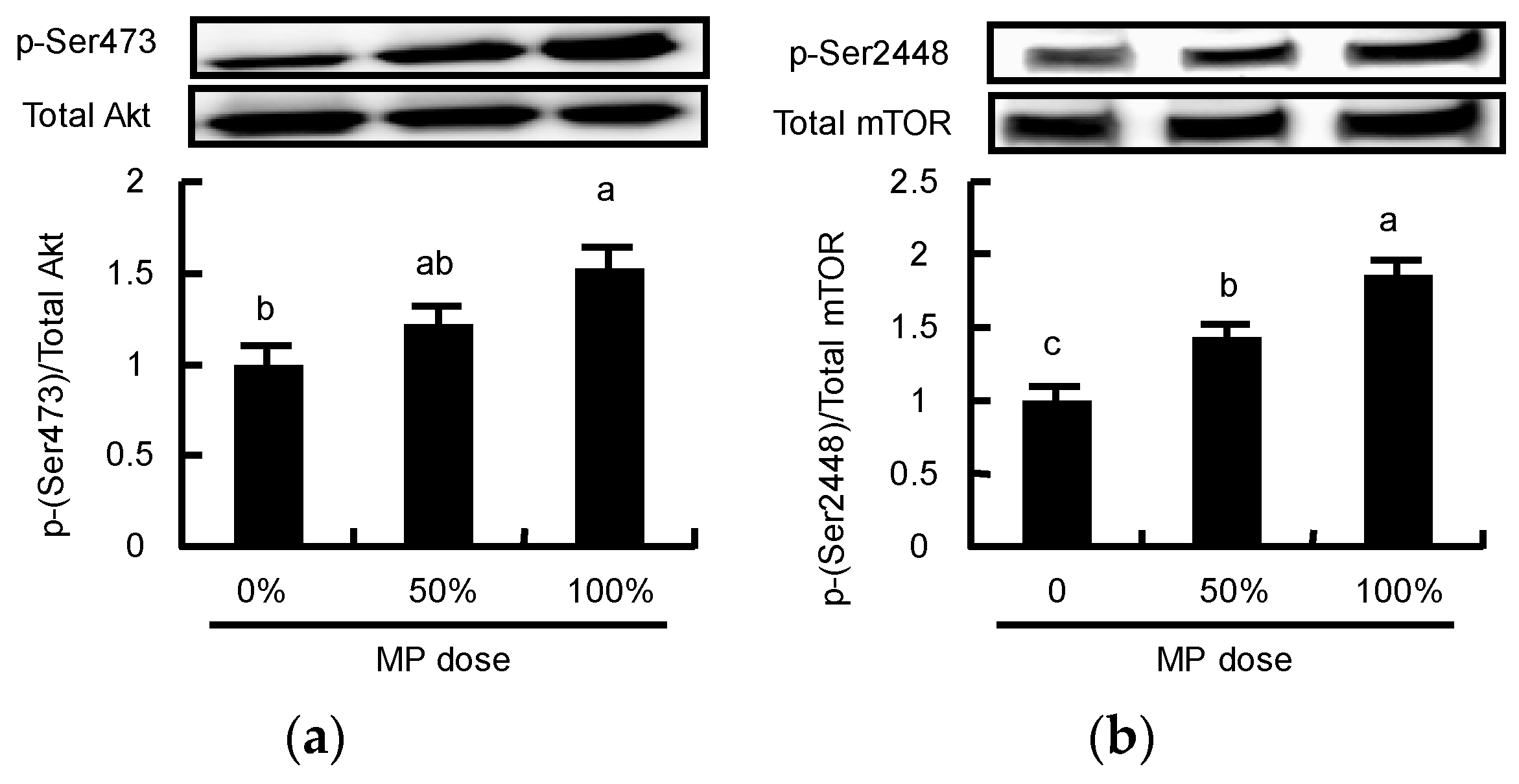