Wine Resveratrol: From the Ground Up
Previous Article in Journal

A total of 8 healthy young males (25 ± 2 years, 23.9 ± 0.8 kg·m−2) were recruited to participate in the study. All subjects were instructed to refrain from any exhaustive physical activity and alcohol consumption for two days prior to each trial. Subjects remained fasted from 2200 h in the evening before each test. This study is part of a larger project (Netherlands Trial Register, NTR5027) that was approved by the Medical Ethical Committee of the Maastricht University Medical Centre+, The Netherlands (METC143052) and conformed to standards for the use of human subjects in research as outlined in the seventh revision of the Declaration of Helsinki (Brazil, 2013).

This randomized, cross-over study compared the effect of body position on gastric emptying rate and plasma amino acid availability after protein ingestion. In a proof-of-principle approach, we chose to assess potential differences in body position by comparing an upright seated body position with a moderately inverted body position. Therefore, subjects consumed the protein bolus in an upright seated position (control) and in a −20° head-down tilted position (inversion). On the test days, participants reported to the lab in a fasted state and had one Teflon catheter inserted into the antecubital vein of the right arm. A background blood sample was collected, and blood pressure and heart rate were measured before subjects were positioned in either the control or inversion position, completed in a randomized order. For the control treatment, subjects sat in a standardized, stationary chair and were instructed to hold their lower back against the back support of the chair. Subjects were supervised throughout the test day and were constantly reminded to maintain the upright posture. For the inversion treatment, subjects were secured with shoulder and waist straps onto a rotatable bed (Confidence Inversion Table, Confidence Fitness, UK) for the duration of the test. Once secured, the table was tilted to an angle of −20° head-down from a horizontal position, confirmed using an electronic level. Subjects acclimatized to each body position for 30 min after which a baseline blood sample was drawn, and blood pressure and heart rate were measured. Following the baseline blood draw, subjects ingested 60 g of skim milk powder (Campina, The Netherlands—Energy (En): 890 kJ, Protein: 22 g, Carbohydrate: 29 g; Fat: 0.4 g) plus 1.5 g paracetamol (acetaminophen, Kruidvat, Leiden, The Netherlands) dissolved in water up to a volume of 500 mL. Paracetamol was added to the beverage to assess gastric emptying rate. The protein bolus was ingested within a 5-min time period for both treatments. Following ingestion of the drink (t = 0 min), blood samples were collected at t = 15, 30, 45, 60, 90, 120, 180, 240 min. After the last blood sample was collected, subjects were slowly returned to an upright body position and re-acclimatized throughout a 10-min time period.

Blood samples were collected in tubes containing EDTA and centrifuged at 1000× g for 10 min at 4 °C. Aliquots of plasma were frozen in liquid nitrogen and stored at −80 °C until further analyses. Plasma glucose and insulin concentrations were analyzed using commercially available kits (Glucose HK CP, Horiba ABX Diagnostics, France, Ref: AA11A01667, and Human Insulin-specific (RIA), Merck Millipore, Germany, Cat #: HI-14K, respectively). Plasma (100 µL) for amino acid analyses was deproteinized on ice with 5-sulphosalicylic acid and mixed, and the clear supernatant was collected after centrifugation. Amino acid profiles were determined using ultra-performance liquid chromatography tandem mass spectrometry (UPLC-MS/MS) as described previously [46]. Plasma paracetamol concentrations were analyzed with an acetaminophen assay kit (K991598, Roche, Basel, Switzerland) with the COBAS-Integra 800 immuno-assay analyzer. Briefly, acetaminophen is hydrolyzed to p-aminophenol and acetate. The p-aminophenol is then converted to an indophenol by enzymatic reaction. The production of indophenol is colorimetrically analyzed and is directly proportional to acetaminophen concentration in plasma.

All data are displayed as means + standard error of means (SEM). Time-dependent variables such as plasma glucose, insulin, amino acid, and paracetamol concentrations were analyzed using a two-way repeated measure ANOVA (time × treatment). Upon identification of a significant time × treatment interaction, Bonferroni post hoc testing was used to identify time points at which the treatments differed. Differences in treatment-dependent variables, such as area under the curve (AUC), were analyzed using a Student’s paired t-test. Pearson’s r product moment correlation was used to examine the linear relationship between plasma essential amino acids (EAAs) and paracetamol AUC for each test. Statistical significance was set at p < 0.05. All calculations were performed using SPSS 21.0 (SPSS Inc., Chicago, IL, USA).

Changes in body position substantially modulate gastric emptying rate and the subsequent post-prandial rise in plasma amino acid availability. Therefore, an upright body position during and after feeding is important for adequate nutrient absorption and should be considered when aiming to optimize post-prandial muscle protein accretion in both health and disease.

We would like to acknowledge the enthusiastic support of the subjects who volunteered to participate in this experiment. 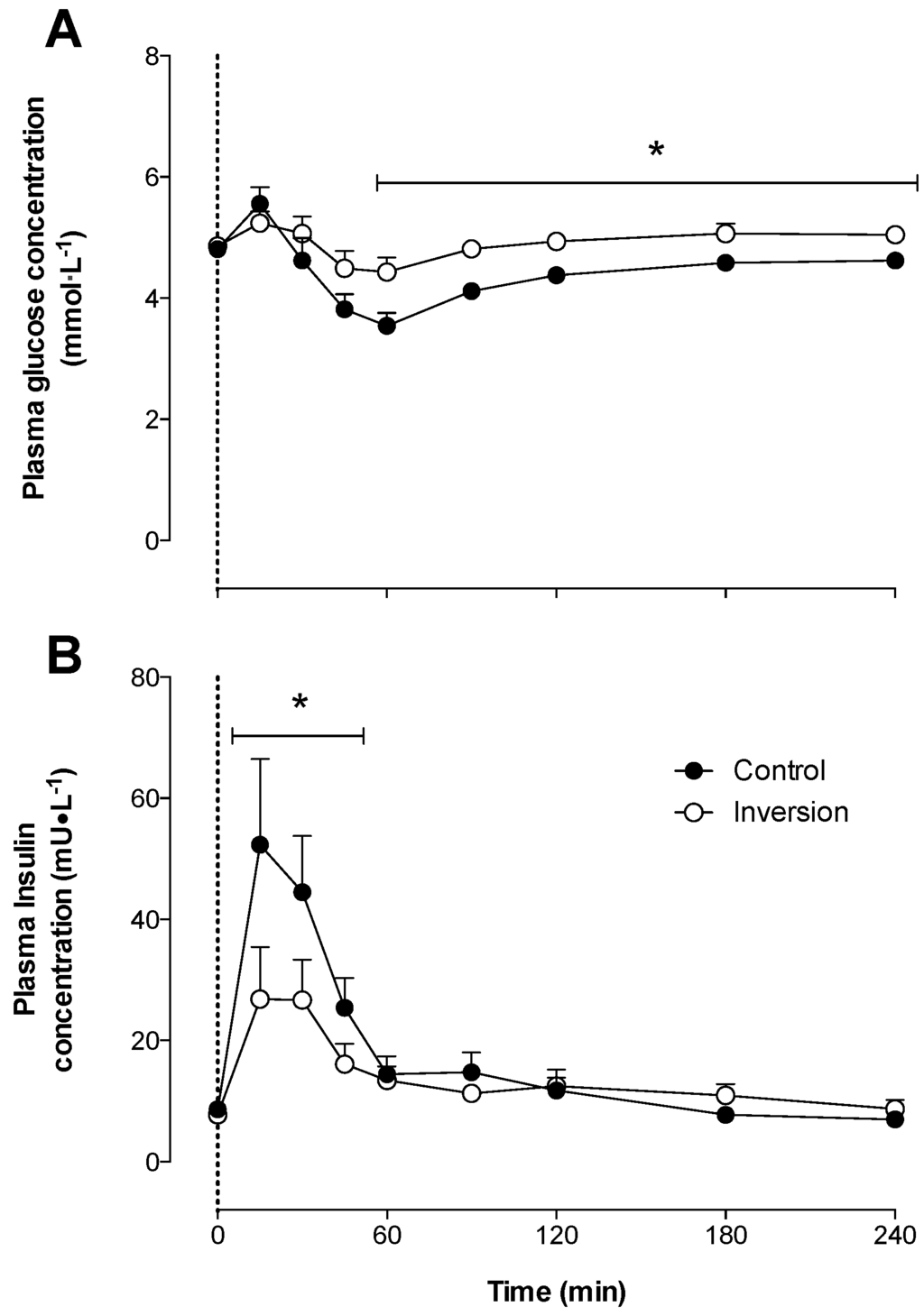 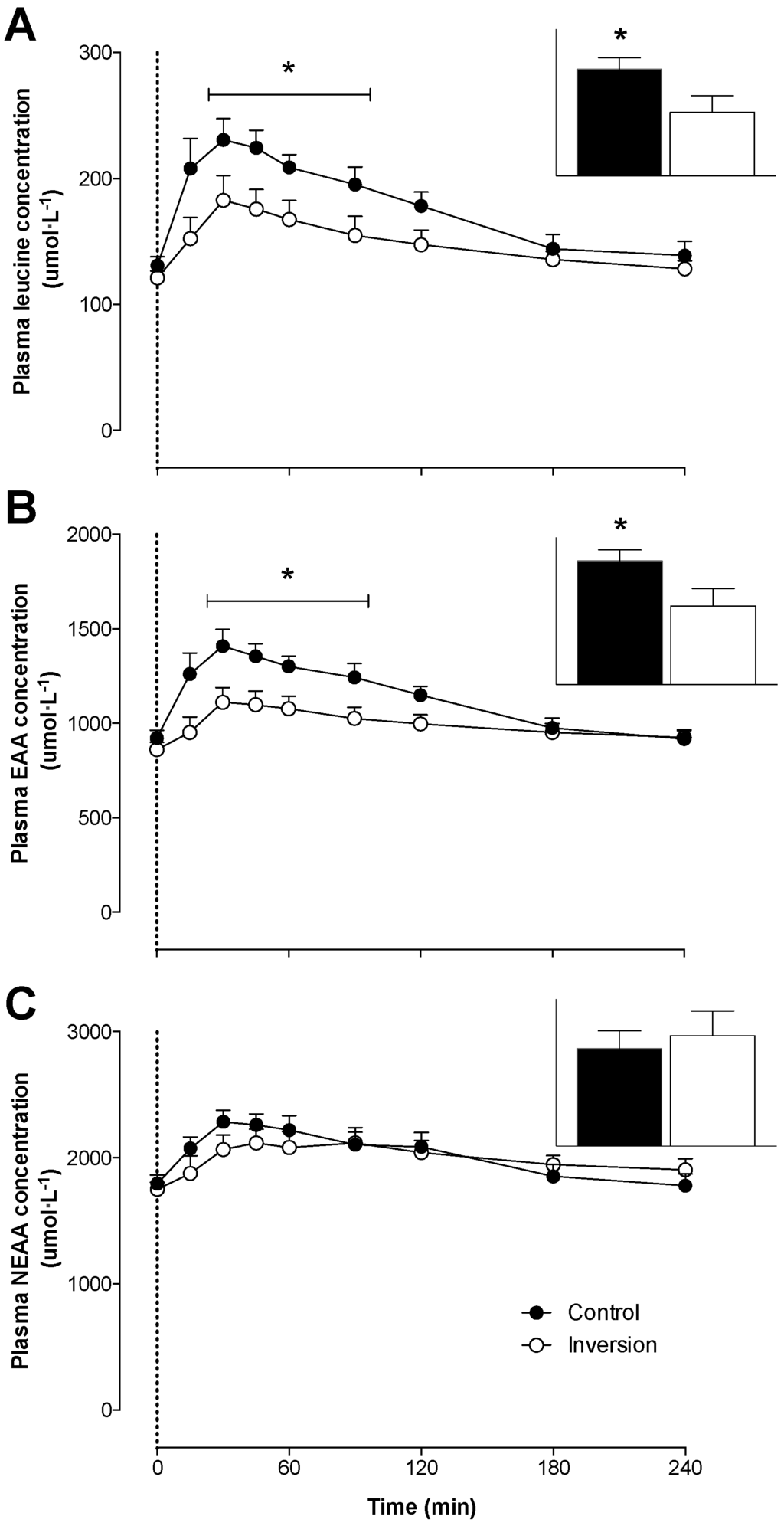 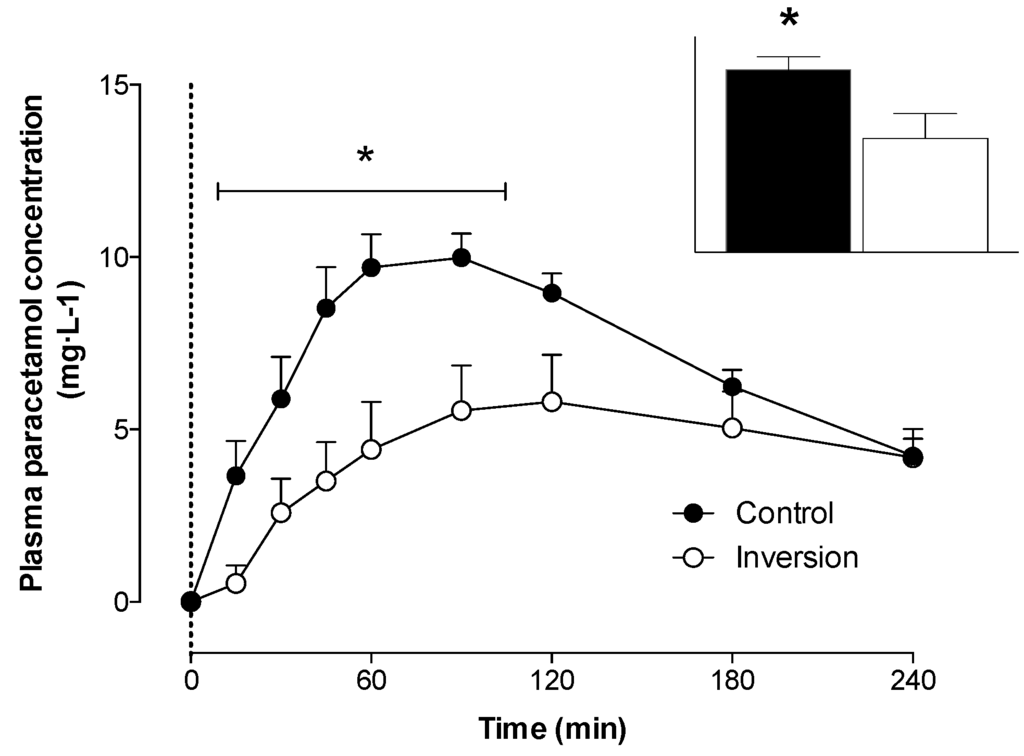 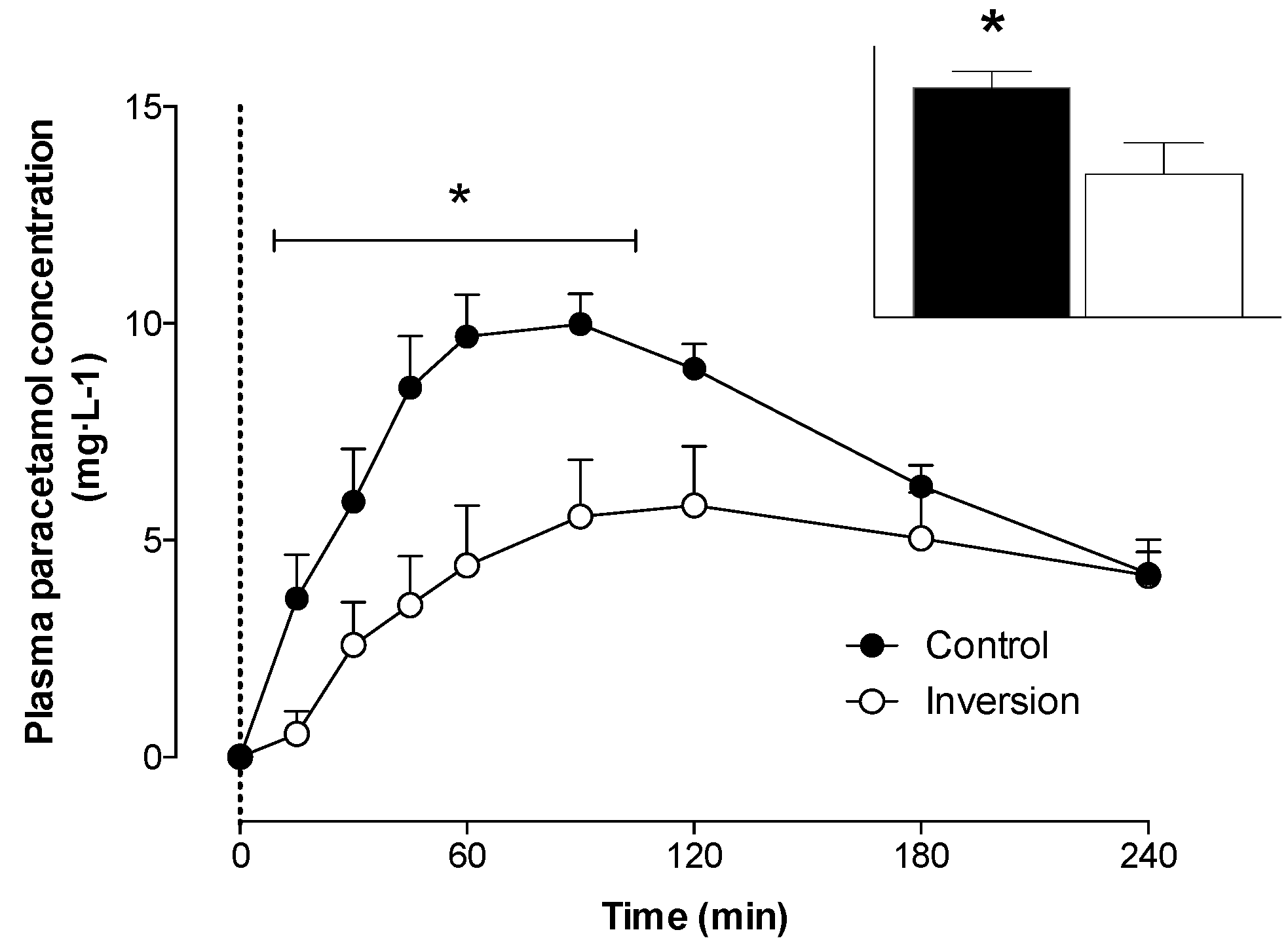 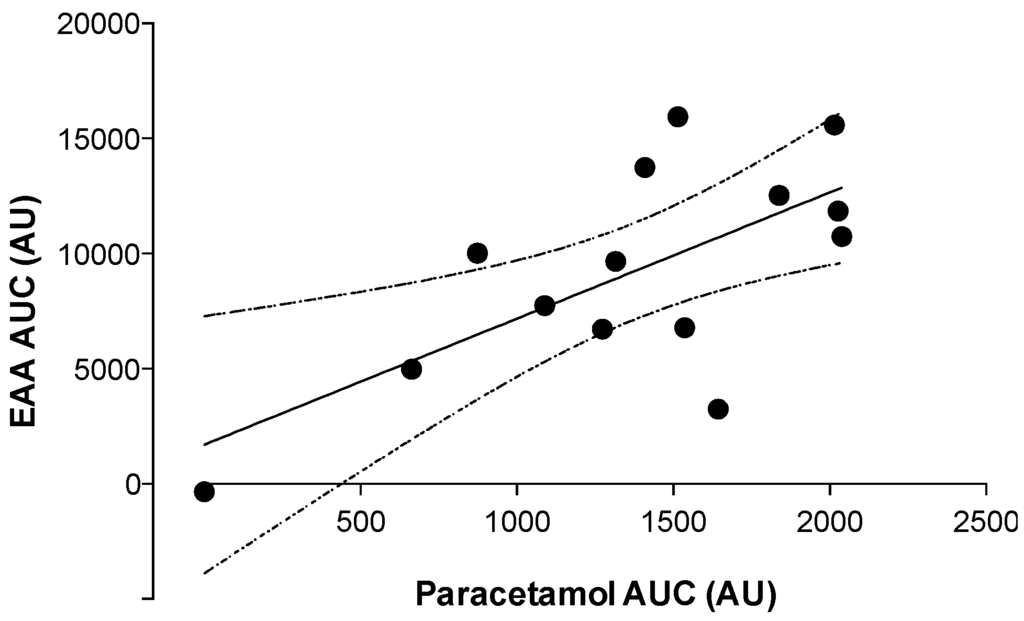 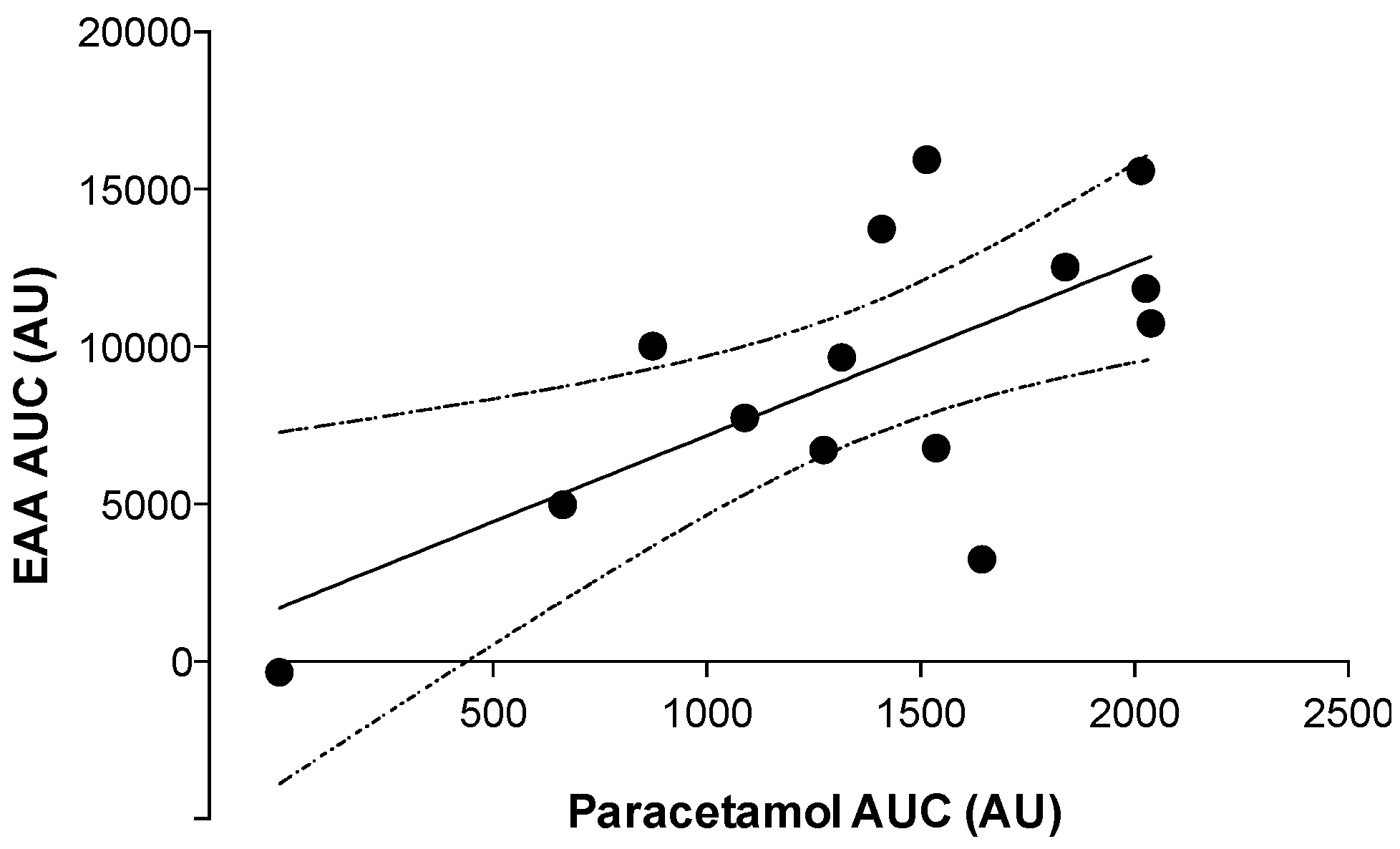