:
Functional food-flaxseed and its derivatives (flaxseed oil or lignans) are beneficial for human health, possibly because of their anti-inflammatory effects. C-reactive protein (CRP), a sensitive marker of inflammation was chosen to evaluate the anti-inflammatory effects of flaxseed. We searched randomized controlled trials from PubMed and the Cochrane Library in October 2015 and conducted a meta-analysis to evaluate the effectiveness of flaxseed and its derivatives on CRP. The mean differences (net change) in CRP (mg/L) concentrations were pooled with a random- or a fixed-effects model depending on the results of heterogeneity tests. Overall, flaxseed interventions had no effects on reduction of CRP (p = 0.428). The null effects were consistent in the subgroup analysis with multiple studies and population characteristics. Significant heterogeneity was observed in most of the analyses. Meta-regression identified baseline body mass index (BMI) as a significant source of heterogeneity (P-interaction = 0.032), with a significant reduction in CRP of 0.83 mg/L (95% confidence interval −1.34 to −0.31; p = 0.002) among subjects with a BMI of ≥30 kg/m2. In conclusion, our meta-analysis did not find sufficient evidence that flaxseed and its derivatives have a beneficial effect on reducing circulating CRP. However, they may significantly reduce CRP in obese populations.
Keywords:
flaxseed; C-reactive protein; randomized controlled trials; meta-analysis

Cardiovascular disease (CVD) is the leading cause of mortality worldwide [1]. A growing body of evidence suggests that inflammation is a key feature in CVD and its risk factors, such as abdominal obesity, metabolic syndrome and type 2 diabetes (T2D) [2]. The changes in the degree of inflammation could be reflected in the fluctuations in the levels of C-reactive protein (CRP), a sensitive marker of inflammation. According to meta-analyses of long-term prospective studies, increased levels of inflammatory marker CRP were strongly positively associated with CVD risk [3,4]. Several dietary factors, such as plant sterols, fiber, isoflavones and omega-3 (n-3) polyunsaturated fatty acids (PUFAs, including eicosapentaenoic acid (EPA), docosahexaenoic acid (DHA), and a-linolenic acid (ALA)) have been shown to be cardiovascular protective based on accumulating evidence from randomized controlled trials (RCTs) [5,6,7]. Reducing inflammation has been recognized as one of the numerous mechanisms by which they may reduce the risk of CVD [6,8]. Flaxseed (linseed, Linum usitatissimum), an edible oil seed/grain, is emerging as an attractive functional food with the richest plant source of ALA (50%–62% of flaxseed oil, or 22% of whole flaxseed) and lignans (a class of phytoestrogen, range: 0.2–13.3 mg/g flaxseed) [9,10,11]. In addition, flaxseed contains abundant dietary fiber (28% by weight), a third of which is soluble fiber [9,10,11].
ALA has been shown to have anti-inflammatory effects through the downregulation of the expression of hepatic inflammatory genes in diabetic rats and a remarkable reduction of plasma CRP levels in rats fed with a high-fat diet [12,13]. Whole flaxseed supplementation has been shown to mitigate pathophysiology of atherosclerosis in myocardial ischemia rat models through decreasing levels of inflammatory markers [14].
The special composition of flaxseed and its possible mechanisms in CVD protection inspire many researchers to perform clinical trials to determine the outcomes of flaxseed intervention (whole flaxseed, flaxseed oil, or lignans) on various cardiovascular risk factors, particularly inflammation status reflected in inflammatory marker levels of CRP [11,15,16,17,18,19,20,21,22,23,24,25,26,27,28,29,30,31,32,33]. However, the findings from those clinical trials were inconsistent, and the discrepancies may be attributable to aspects of the study design (e.g., study power, the patient recruited, sample size, study duration, flaxseed or its derivatives dose used). Therefore, we performed a meta-analysis of published RCTs to evaluate whether administration of flaxseed or its derivatives could ameliorate inflammation status.

We made attempts to follow the Preferred Reporting Items for Systematic Reviews and Meta-Analysis (PRISMA) guidelines in the report of this meta-analysis and registered our report in PROSPERO (International prospective register of systemic reviews; CRD42016034184) [34]. Two researchers (G.-Y.R. and C.-Y.C) independently searched PubMed and the Cochrane Library for English-language reports of clinical trials published in October 2015. Studies describing the effects of flaxseed or its derivatives (in the form of whole or ground flaxseed, flaxseed oil, or lignan supplement) in adults were selected. The following keywords were applied to the search: (“C-reactive protein” OR CRP OR inflammation) AND (flax* OR linseed OR lignan OR “Linum usitatissimum”). For literature search in PubMed, the filters, such as Full text, Humans and English were activated. The search in the Cochrane Library was limited to Trials (the detailed search strategy is shown in Table S1). Additionally, the reference lists of selected studies and relevant reviews [10,35,36,37,38,39] were also checked to ensure a complete collection. Attempts were also made to contact investigators for unpublished data.

Studies were included for analysis if they met the following criteria: (1) The subjects consumed flaxseed or its derivatives for at least 2 weeks; (2) the study was an RCT with either a parallel or crossover design; (3) the study reported the dose of flaxseed, lignans, or flaxseed oil (or ALA); and (4) the effects of flaxseed or its derivatives on inflammatory marker CRP could be extracted from the report.

The following information was extracted and tabulated for analysis: authors, publication year, sample size and attrition, dose and type of the intervention, control treatment, study duration, study design (crossover or parallel), participant information (sex, age, health status), and CRP data. The study quality was assessed with the Jadad score (randomization, blinding, description of withdrawals and dropouts, methods of randomization, and double-blinding status) for RCTs [40]. The total score was the sum of the 5 points, which generated a scale from 0 to 5; higher numbers represented better quality.

The effect was defined as the mean difference (net change) in CRP (mg/L) concentrations. For parallel trials, the net changes were calculated using the difference (intervention minus control) of the changes (final values minus baseline values) of the mean values. For cross-over trials, the net changes were calculated as the difference of mean values at the end of the intervention and control periods. Where necessary, standard errors and confidence intervals (CIs) were converted to standard deviations (SDs) for the analysis. The SDs for changes from baseline in the intervention and control groups were obtained. If not specified in the original paper, we computed the missing SDs using the method proposed by Follmann et al. [41], where a correlation coefficient of 0.5 was assumed.
The heterogeneity of the effect sizes among studies was tested using the I2 and the Cochrane Q tests statistics. Either a fixed-effect or random-effects model (in the presence of heterogeneity, p value for Q test < 0.1 or I2 > 50%) was used to calculate the combined effect size. The influence of a single study on the overall effect estimate was investigated by omitting one study in each turn. Meta-regression was implemented to examine characteristics of the studies that were hypothesized as influencing the observed treatment effects. We further conducted pre-specified subgroup analysis stratified by type of intervention (whole flaxseed, flaxseed oil or flaxseed lignan), intervention dose, study duration, study design, study sample size, study quality score (measured with the Jadad score), participant gender, participant BMI, participant age, and baseline CRP level. Publication bias was evaluated with the Funnel plots and Egger’s regression model.
All analyses were performed using STATA version 11.0 (StataCorp, College Station, TX, USA). p < 0.05 was deemed statistically significant, except where otherwise specified.

A total of 219 citations (171 items from PubMed and 48 items from the Cochrane Library) was yielded from the literature search (search strategy in Table S1). After the title and abstract screening, 33 items were retrieved for more detailed reviews. A total of 13 reports were excluded after carefully reading the full reports (see Table S2). Finally, we identified 20 studies that were suitable for our meta-analysis (Figure 1).

3.2. Characteristics of the Studies

3.4. Subgroup and Meta-Regression Analysis for CRP

Considering that the basal levels of CRP, type of study design (parallel or crossover design), study quality (measured with the Jadad score), study duration, sex composition, age, body mass index (BMI), type of intervention (whole flaxseed, flaxseed oil, or lignan supplement), and intervention dose may influence the net changes of CRP, we conducted meta-regression analysis based on these variables. We detected sources of heterogeneity according to multiple pre-defined study and population characteristics and found that the type of intervention (p = 0.008), baseline BMI (p = 0.032), and possibly baseline CRP (p = 0.064) contributed to the heterogeneity among studies, but only the stratum of obese populations showed significant results in CRP reduction (−0.83 mg/L; 95% CI: −1.34 to −0.31; p = 0.002) (Table 2). Among the strata of whole flaxseed intervention, lignan intervention and participants with higher BMI showed non-significant tendencies toward reduced CRP, which may be due to a low statistical power resulting from small effect of flaxseed and/or small sample size included (Table 2).

Both the funnel plot and Egger’s test (p = 0.007) showed evidence of publication bias in CRP (Figure 3). 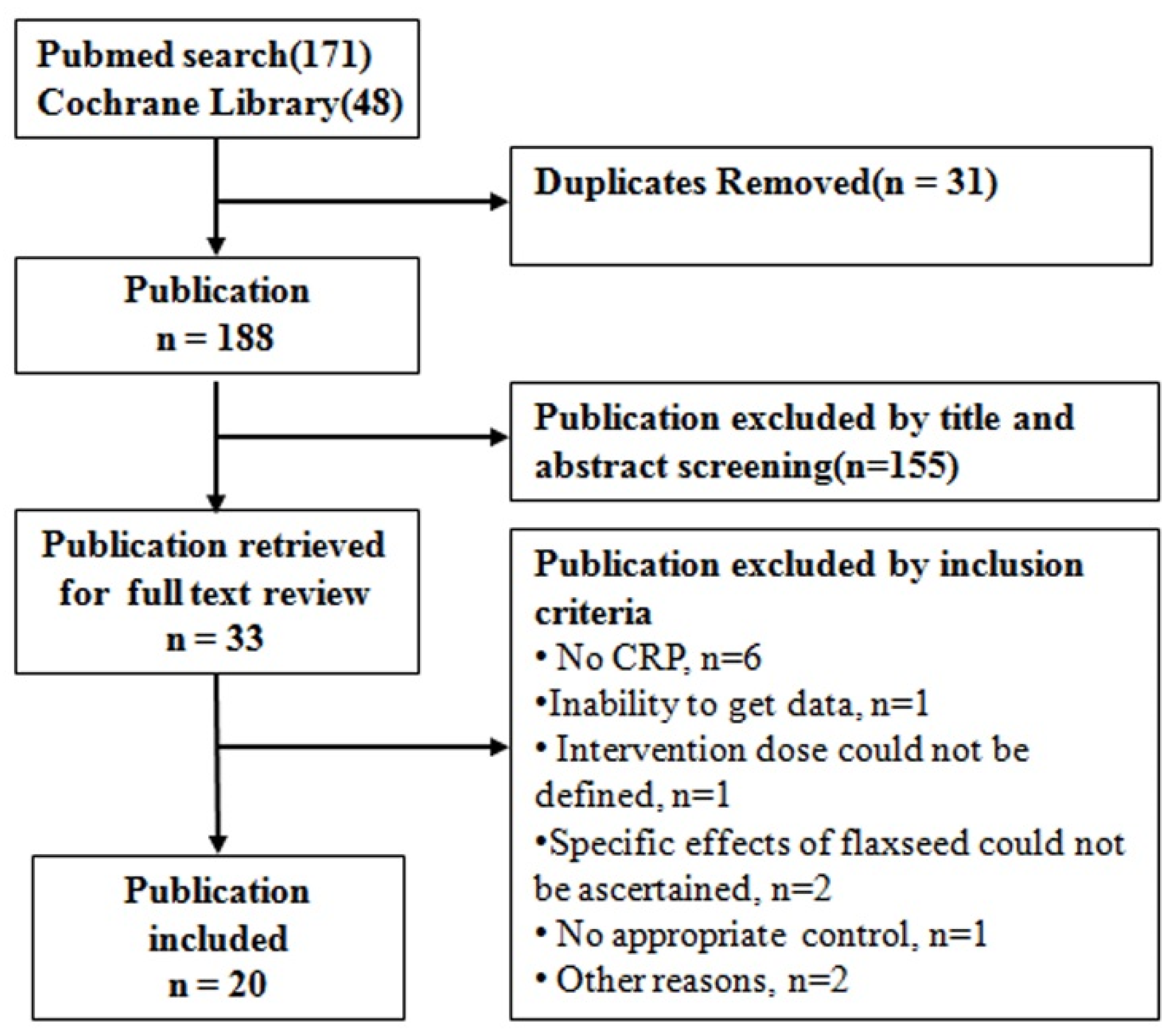 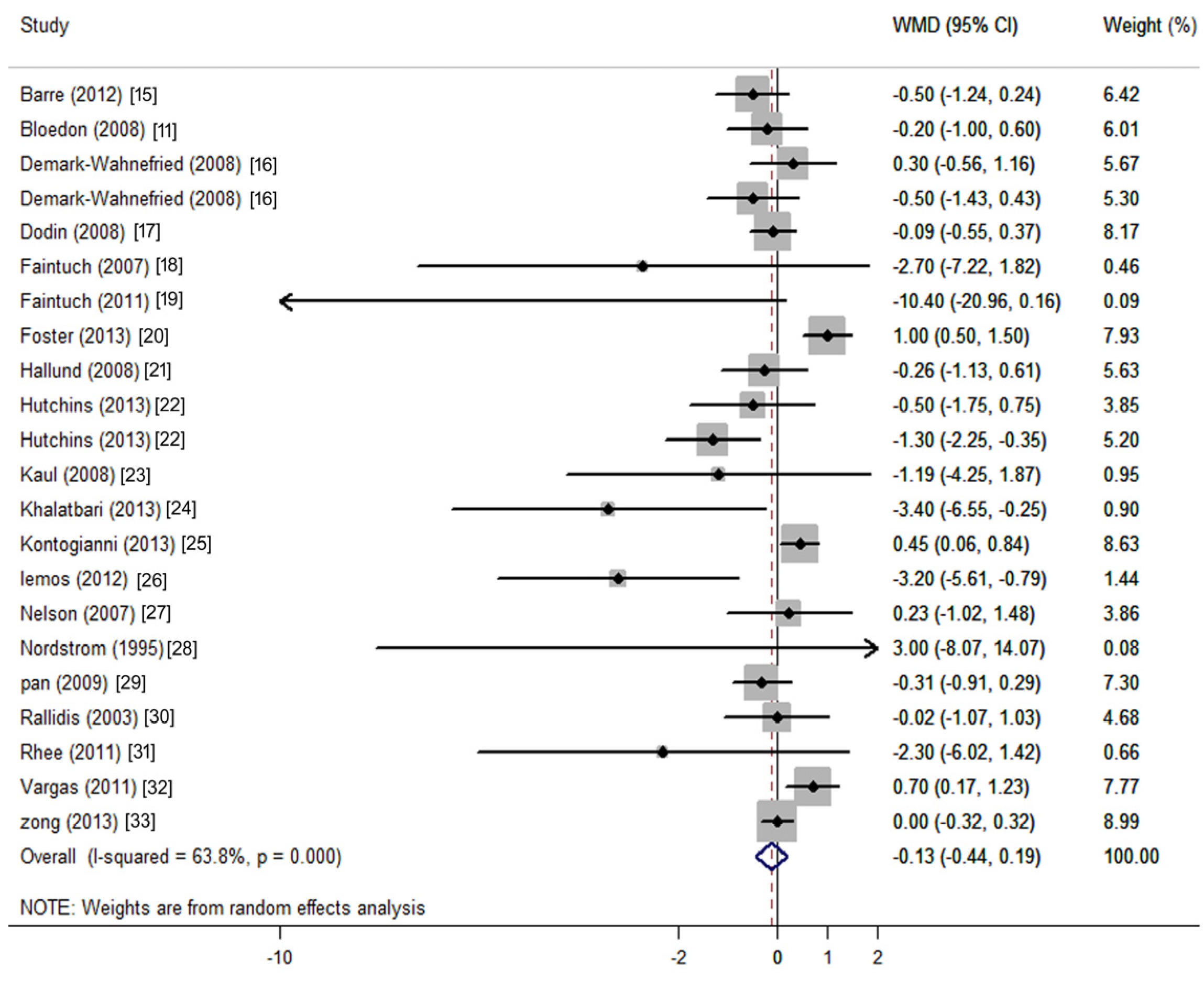