Metformin Treatment and Homocysteine: A Systematic Review and Meta-Analysis of Randomized Controlled Trials

Diet-induced thermogenesis (DIT) is believed to be largely related to ATP production, which is dependent on phosphorus (P) availability. We aimed to test the effect of P addition on DIT of lean and overweight/obese healthy subjects. DIT was measured with or without P in 10 lean and 13 overweight/obese adults in a double-blind randomized cross-over pilot study with one week washout period. After 10 h overnight fast, resting metabolic rate, respiratory quotient, and substrate utilization were measured at fasting and every 30 min for 3 h after subjects drank a standardized glucose solution, with P (500 mg) or placebo pills. Subjective ratings of hunger and satiety were assessed before and after the end of each experiment using validated visual analogue scale (VAS) questionnaires. Overweight/obese subjects had a blunted DIT with placebo, while P supplementation induced a 23% increase in their DIT area under the curve (p < 0.05), which was associated with a significant increase in carbohydrate oxidation. Subjects had lower appetite following P supplementation, which was expressed as a significantly (p = 0.02) lower desire to eat a meal (4.0 ± 0.7 cm) compared with placebo (5.8 ± 0.9 cm). P supplementation recovers the blunted diet-induced thermogenesis in overweight and obese subjects and enhances their postprandial satiety.
Keywords: phosphorus; supplementation; diet induced thermogenesis; obesity; energy expenditure; energy balance phosphorus; supplementation; diet induced thermogenesis; obesity; energy expenditure; energy balance

Diet induced thermogenesis (DIT) is the increase in energy expenditure above the basal resting rate that takes place after the ingestion of food components. It accounts for 5%–15% of total energy expenditure [1], and is the highest for protein-rich foods [2].
There is a large body of evidence that shows a blunted or reduced DIT in obese individuals [3,4,5,6,7]—especially those with diabetes [8]—that was normalized after weight loss [6,7]. Therefore, insulin resistance and/or insulin shortage plays a role in postprandial adenosine triphosphate (ATP) production [9], most likely by reducing the peripheral uptake of substrates needed for its production—mainly glucose and phosphorus [10]. This triggers a vicious cycle, since phosphorus depletion also appears to induce insulin resistance and glucose intolerance in animals [11]. Similarly, an inverse relationship was observed in humans between serum phosphate levels and glucose levels and homeostatic model assessment of insulin resistance index (HOMA-IR) [12,13,14]. In line with this, the addition of phosphorus to meals was shown to improve HOMA-IR in rodents [15,16]. We have also recently demonstrated that meal P supplementation improves postprandial glucose tolerance in healthy men [17].
On the other hand, obese subjects taking P supplementation in a weight reducing program had an increase in their basal metabolic rate [18,19]. Similar results were recently reported in rats, whereby the administration of a high phosphorus diet for four weeks induced thermogenesis by increasing uncoupling protein-1 (UCP-1) expression in brown adipose tissue [16]. However, few studies examining the effect of P supplementation of DIT in humans have been conducted. Only two studies on older postmenopausal women have revealed that the addition of P to meals increased postprandial thermogenesis in obese but not lean women [20,21]. No other study looked at the impact on younger lean or obese men and women.
Postprandial ATP production in the liver has also been linked to signaling satiety, whereby changes in hepatic energy status are transmitted via hepatic vagal afferent activity to the central nervous system [22,23,24,25,26]. Accordingly, an analysis of the metabolic data using the Knowledge Discovery in Databases have reached the conclusion that decreased energy levels or ATP deficiency were strongly linked to the development of obesity by driving overeating and conserving energy [27]. We have also recently found that the addition of 500 mg P to different preloads led to substantial reduction in ad libitum subsequent energy intake (27%–33%) [28]. Therefore, in addition to its aforementioned role in thermogenesis and insulin sensitivity, the effect of P on food intake can explain the reported inverse relationship between P status, obesity, and metabolic syndrome [13,29,30,31,32,33].
More studies are warranted to investigate the relationship between P intake and DIT and satiety in the context of obesity and insulin resistance in young adults. Therefore, the objective of the present study was to test the effect of P supplementation on diet-induced thermogenesis and satiety after the ingestion of glucose solution in lean and overweight/obese healthy men and women.

The experimental design is a double blind randomized cross over design, whereby each subject was studied twice (two experimental sessions) with a minimum of 1-week washout period. A total of 10 lean and 13 overweight and obese (herein referred to only as obese) adults were recruited. Subjects were healthy, non-smokers, sedentary [34], with stable body weight for the past 3 months, not following a special diet (confirmed by multi-pass 24-h recall), and not taking any medication that affects metabolism. Subjects were asked to stop caffeine one week before the experiment.

At the end of the experiment, subjective appetite scores were collected from the subjects, using visual analogue scale (VAS) questionnaires [36]. Moreover, habitual P intake (within the past month) was assessed for all subjects using a culturally-specific semi-quantitative food frequency questionnaire (FFQ) that included P-rich food items (both natural and processed), categorized into meat and poultry, fish and shellfish, milk and dairy products, nuts and seeds, legumes, grain products, and carbonated non-alcoholic beverages. Data from the multi-pass 24-h recall and from the FFQ were analyzed for energy and nutrient analysis using Nutritionist Pro™ Diet Analysis Software version 5.1 (Axxya Systems LLC, Woodinville, WA, USA).
This study was approved by the Institutional Review Board of the Lebanese American University.

Data are reported as Mean ± SEM. Two-tailed independent t-test was performed to compare data between lean and obese groups. Paired t-test was used for comparisons between P and placebo experiments. Repeated measures were performed to analyze within-subject results for diet-induced thermogenesis. Pearson’s correlation was used to compute the bivariate relations between BMI and P intake. Based on the effect size and SD difference from the study by Khattab et al. (2015) [17], a minimum of 10 subjects are needed to achieve 90% power with two-sided 5% significance level. All data were analyzed with the SPSS version 23 statistical package, and statistical significance was defined as p < 0.05.

Subject characteristics are presented in Table 1. Obese subjects had significantly higher weight, BMI, fat percentage, and resting metabolic rate (RMR) compared to lean subjects. Fat free mass (FFM) was not different between groups, and thus RMR was not corrected for FFM. Daily energy intakes estimated from multi-pass 24 h recall did not differ between groups. However, phosphorus intake estimated from the FFQ normalized per 1000 ingested calories was significantly higher in lean compared to obese subjects. Baseline characteristics of lean and obese subjects were similar between the two experimental sessions (P and placebo).
Figure 1 shows RMR measured at baseline and for 3 h after the ingestion of 75 g glucose solution in lean and obese subjects, with P or with placebo. RMR of lean subjects significantly increased above baseline with or without phosphorus (repeated measures) (Figure 1A), but area under the curve (kcal/180 min) did not differ between experiments (Figure 1B). P supplementation was associated with significantly higher RMR at 30 min in lean subjects as compared to placebo (independent t-test). Obese subjects had a blunted DIT with placebo, as RMR did not change from baseline over 3 h after ingestion of glucose solution (p > 0.05 using repeated measures) (Figure 1A), while P supplementation resulted in significant increase in RMR above baseline such that area under the curve was 23% higher compared with placebo (p < 0.05) (Figure 1B). Moreover, RMR of obese subjects at 30 and 90 min after glucose ingestion was significantly higher with P vs. placebo (independent t-test) (Figure 1A).
Substrate utilization is presented in Table 2. The obese group had significantly higher fat oxidation at baseline compared to the lean group. After drinking 75 g glucose solution, carbohydrate oxidation was significantly increased, while fat oxidation was suppressed, consistent with a significant increase in RQ. P supplementation did not affect the rate of substrate oxidation in lean subjects. On the other hand, postprandial fat oxidation in obese subjects was more suppressed in the placebo experiment compared to lean (58% vs. 36% suppression), but this was not observed with phosphorus (31% suppression). In addition, P supplementation resulted in a significant increase in carbohydrate oxidation in obese subjects.
Subjective appetite scores measured using VAS at the end of the experiment showed higher appetite and lower hunger with phosphorus supplementation versus placebo (Figure 2), which was statistically significant (p < 0.05) for the “desire to eat a meal” and the “desire to eat something savory”.
In addition, there was an inverse correlation between daily P intake (per 1000 kcal) assessed using the FFQ and BMI (r = −0.48, p = 0.024) (Figure 3) after pooling all lean and obese subjects together.

Phosphorus supplementation increases postprandial thermogenesis in lean and obese adults, with a more pronounced effect among obese subjects. Phosphorus also promotes fullness in obesity. Our findings set the stage for meal P supplementation or fortification as a promising obesity treatment at moderate levels (500 mg P per meal), which are far below the upper safe level of intake (4 g) [43]. 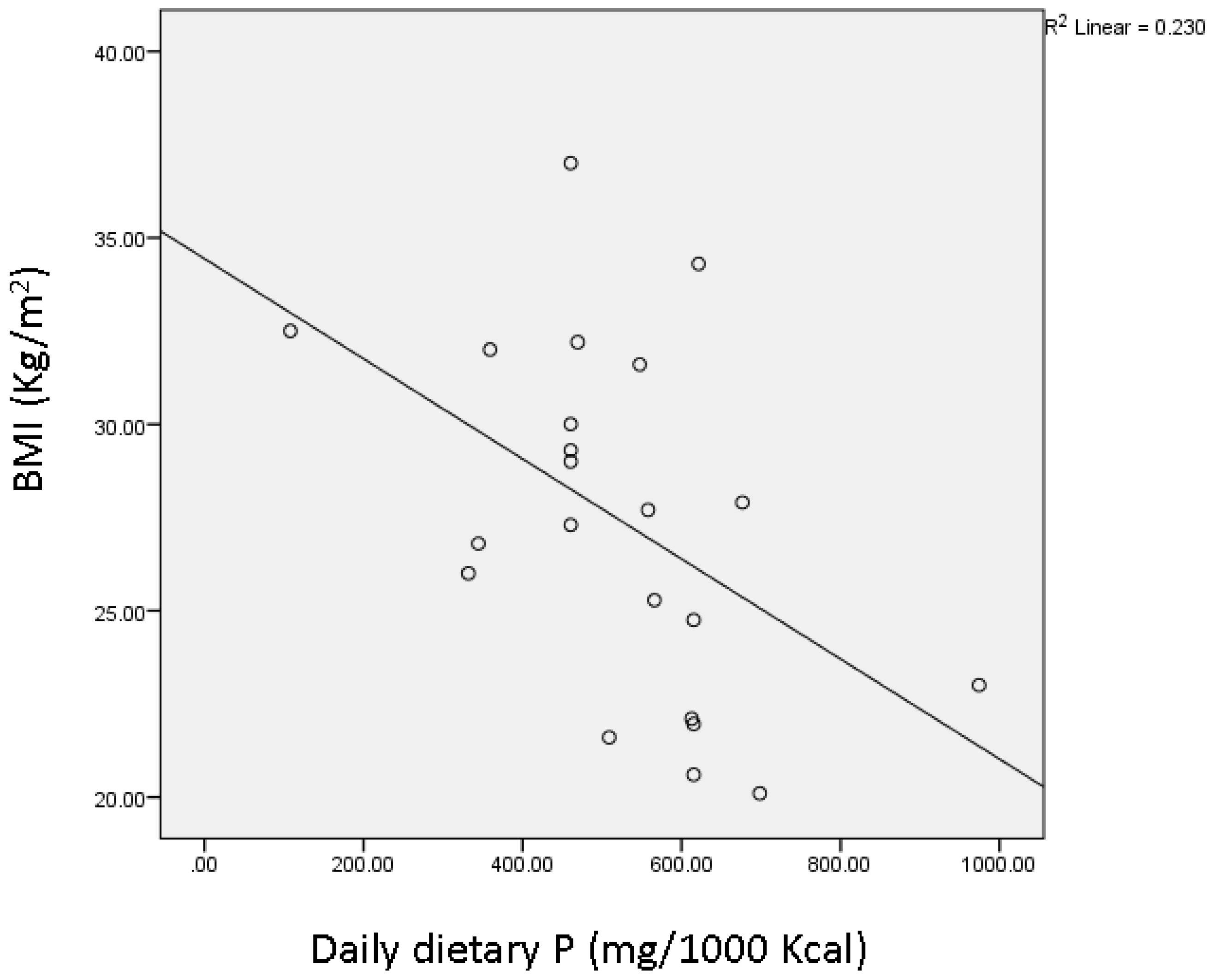