Correction: Ramírez-Vélez, R.; et al. Performance of Two Bioelectrical Impedance Analyses in the Diagnosis of Overweight and Obesity in Children and Adolescents: The FUPRECOL Study. Nutrients 2016, 8, 575
Previous Article in Journal

We provide new fish oil product results to assist industry in Australia and New Zealand and, ultimately, consumers in understanding the high product quality assurance protocols in place, together with the high product quality that has been determined by both industry and independent laboratories. Fish oil capsule products common to Australia and New Zealand were purchased in May 2016 in Richmond, Victoria, Australia. Products were from two groups; five standard fish oil products and five fish oil concentrates. Noting Therapeutic Goods Administration (TGA) requirement for use of standard methods, for all analyses undertaken a laboratory was selected that met the TGA criteria, including with accreditation. Total n-3 content exceeded the label-claimed content for all 10 products, with supplements containing on average 124% of the claimed content (range 115%–136%); eicosapentaenoic acid and docosahexaenoic acid (EPA + DHA) content averaged 109% of the label claim (range 99%–119%). All 10 products (100%) similarly met the international recommended peroxide value (PV) level. Anisidine value (pAV) met the international recommended level for eight of the 10 products, with two products known to contain flavorings that interfere with the pAV test. When accredited laboratories and standard protocols are used, Australian and New Zealand fish oil products have been shown to clearly meet their label claims for EPA + DHA content, and are not oxidized.
Keywords: n-3 LC-PUFA; EPA; DHA; peroxide value; Australian and New Zealand fish oils n-3 LC-PUFA; EPA; DHA; peroxide value; Australian and New Zealand fish oils

The health benefits of omega-3 long-chain (≥C20) polyunsaturated fatty acids (LC-PUFA, also termed LC omega-3 or more generally n-3 oils by some user groups) were first documented over three decades ago. Danish researchers reported that Greenland Eskimos had lower incidence of heart disease than other ethnic groups in spite of their high fat diet that was rich in marine mammal blubber [1]. The main LC omega-3 oils attributed to cause this health benefit were eicosapentaenoic acid (EPA, 20:5n-3) and docosahexaenoic acid (DHA, 22:6n-3). For simplicity, we use the term LC omega-3 in this paper in consideration of both fatty acids, and also that of docosapentaenoic acid (DPA, 22:5n-3), which is also a minor component of fish and fish oils. The traditional main source for these health-benefitting LC omega-3 oils has been seafood [2]. Since the early research, in excess of 30,000 scientific papers have been published examining the health benefits of LC omega-3 oils, with around 80% of the studies showing numerous health benefits are associated with consumption of these key nutrients [3]. Of the remaining studies, most of these do not demonstrate clear benefits, and this is generally attributed to the complexity of nutritional research and other factors [4], while only a few show negative results.
Against the large and clear body of evidence supporting the benefits of and the need to increase consumption of the health-benefitting LC omega-3 oils, particularly for those on largely western diets, several papers have been published in early 2015 [5] and again in mid-2016 [6] reporting that New Zealand (and Australian) products contained substantially lower EPA + DHA content than label claims and were also heavily oxidized. The 2015 results [5] were not obtained from an accredited laboratory, and nor were standard protocols used [7,8]. The 2015 study [5] specifically stated that ‘fish oil supplements in New Zealand are highly oxidised and do not meet label content of n-3 PUFA’. The second New Zealand study was conducted using laboratory oxidized fish oil [6], with the justification being the results of the early 2015 paper [5]. The authors investigated both percentage input of n-3 EPA + DHA content (measured n-3 content expressed as a percentage of the label claim) and oxidation levels of fish oil supplements purchased in retail outlets in New Zealand. The selected products were not identified by brand name, but they came from both Australian and New Zealand companies. Media in the region and elsewhere picked up on 2015 paper [5] and television, newspaper and radio reports were particularly negative in New Zealand.
In this study, we report new results and other information to assist the Australian and New Zealand industry and ultimately consumers and other end users in understanding the high product quality assurance protocols already in place, together with the high product quality that has been determined by both industry and independent laboratories.

Fish oil capsule products were purchased in May 2016 from the Chemist Warehouse outlet in Bridge Road, Richmond, Victoria. Products were from two groups; five were standard fish oil products and five were fish oil concentrates (Table 1). The brands are common to Australian and New Zealand outlets. Two bottles were purchased of each brand, with one bottle archived for possible follow up work. For nine of the ten products, the two bottles were from identical batches. For one product only, the two bottles were from separate batches.
Sample containers were not opened and were taken directly by one author from the site of purchase to ALS Food & Pharmaceutical, located at Scoresby, Victoria. The samples were then transported to the ALS Rydalmere, NSW facilities for the analyses, with analyses performed blind. The ALS Rydalmere facilities maintain a GMP license for analysis held with the TGA and Australian Pesticides and Veterinary Medicines Authority. Samples were analysed within 10 days from purchase, with reporting on peroxide value (PV), anisidine value (pAV) and mg/g fatty acids (FA) occurring in June and for the percent FA in September 2016. Details on the 10 products analysed are shown in Table 1.
Full details on analytical methods are available on request from ALS; briefly, British Pharmacopoeia (BP) methods were used for PV and pAV determinations, with ALS method P111 used for fatty acid analyses. P111 is an ALS in house method, based on BP 2.4.22 with slight modifications to the column length and the addition of another internal standard. Oil pooled from 20 capsules per Brand was used for the three analyses—PV, pAV, FA. For the sample preparation for FA determinations, the derivatisation procedure involved simple breakdown of diluted oil, with sodium hydroxide in methanol added and heating for 30 min, then cooling, followed by addition of boron trifluoride. After heating, cooling, addition of hexane and mixing, then addition of saturated sodium chloride solution and shaking, the layers were allowed to separate; the top layer was then taken and analysed by gas chromatography (GC). The concentration and the percentage level of FA in the fats and oil samples was determined using an Agilent 6890 GC fitted with a polar column, split injector and flame ionisation detector. For the EPA + DHA determination, an appropriate amount of sample was dissolved in 1 mL internal standard (containing heptadecanoic acid and lauric acid). Samples were analysed in the same run alongside a standard preparation with known concentrations of EPA and DHA. All analyses (PV, pAV, FA) were performed in duplicate, with the data presented here being the mean values.

The 10 products were analysed for total n-3, including EPA + DHA content (Figure 1). The total n-3 content exceeded the label-claimed content for all 10 products, with supplements containing on average 124% of the claimed content (range 115%–136%, Figure 1). On average, EPA + DHA was 109% of the claimed content (range 99%–119%). The standard fish oil products (1–5) varied in terms of cost, number of capsules in the container, with product 5 also containing greater amounts of EPA + DHA per capsule; this was due to the size of the capsule (1500 mg) being greater than products 1–4 (all 1000 mg). Overall the cost to consumers to obtain the National Health and Medical Research Council (NHMRC) recommended intake (~500 mg/day of LC omega-3; 610 mg/day males, 430 mg/day females) via intake of the standard fish oil products varied twofold from 5 to 12 cents, or $15.50 to $45 (average $31) on a per annum basis.
The fish oil concentrate products (6–10) also showed variation in cost, the number and size of capsules, and thereby also the cost to consumers to obtain the recommended NHMRC intake (Table 1). The overall cost to consumers was higher than that for the standard fish oil products, at $33 to $103 (average $81) per annum.
The percent composition of the major fatty acids, including EPA, DPA and DHA, is presented in Table 2. The five standard fish oil products (1–5) showed similar profiles, including for the 3 LC omega-3 oils; the profiles were similar to those reported previously for such products [9,10]. The five concentrate products contained comparatively elevated levels of the three LC omega-3, with EPA + DHA in the range 59%–66% of total fatty acids (Table 2); once again these results were similar to enriched products previously reported [9,10]. EPA ranged from 36% to 41%, with DHA varying from 21% to 26%.

The Australian and New Zealand Omega-3 Centre funded the analyses. The Omega-3 Centre is a specialty healthcare association for Australia and New Zealand that promotes the “good science” and health benefits of long-chain omega-3 fatty acids. Membership of the Omega-3 Centre includes omega-3 ingredient suppliers, seafood and consumer products companies, government agencies, universities and interested individuals. We thank the TGA for access to their unpublished data, their advice regards suitable laboratories meeting TGA requirements and other valuable inputs and discussions over fish oil analysis matters. ALS, Food and Pharmaceuticals are thanked for their assistance in provision of the analytical results reported here, and for discussions during the reporting process, in particular Scott Colbourne and Chris Brady. We thank Jason McAllister, Rick Phleger and two anonymous journal reviewers for their comments on the manuscript. Nichols and Sinclair are both members of the Nutrition Society of Australia and the Australasian section of AOCS.

P.D.N., L.D. and A.S. conceived and designed the experiments, P.N. analyzed the data; All authors wrote the paper. 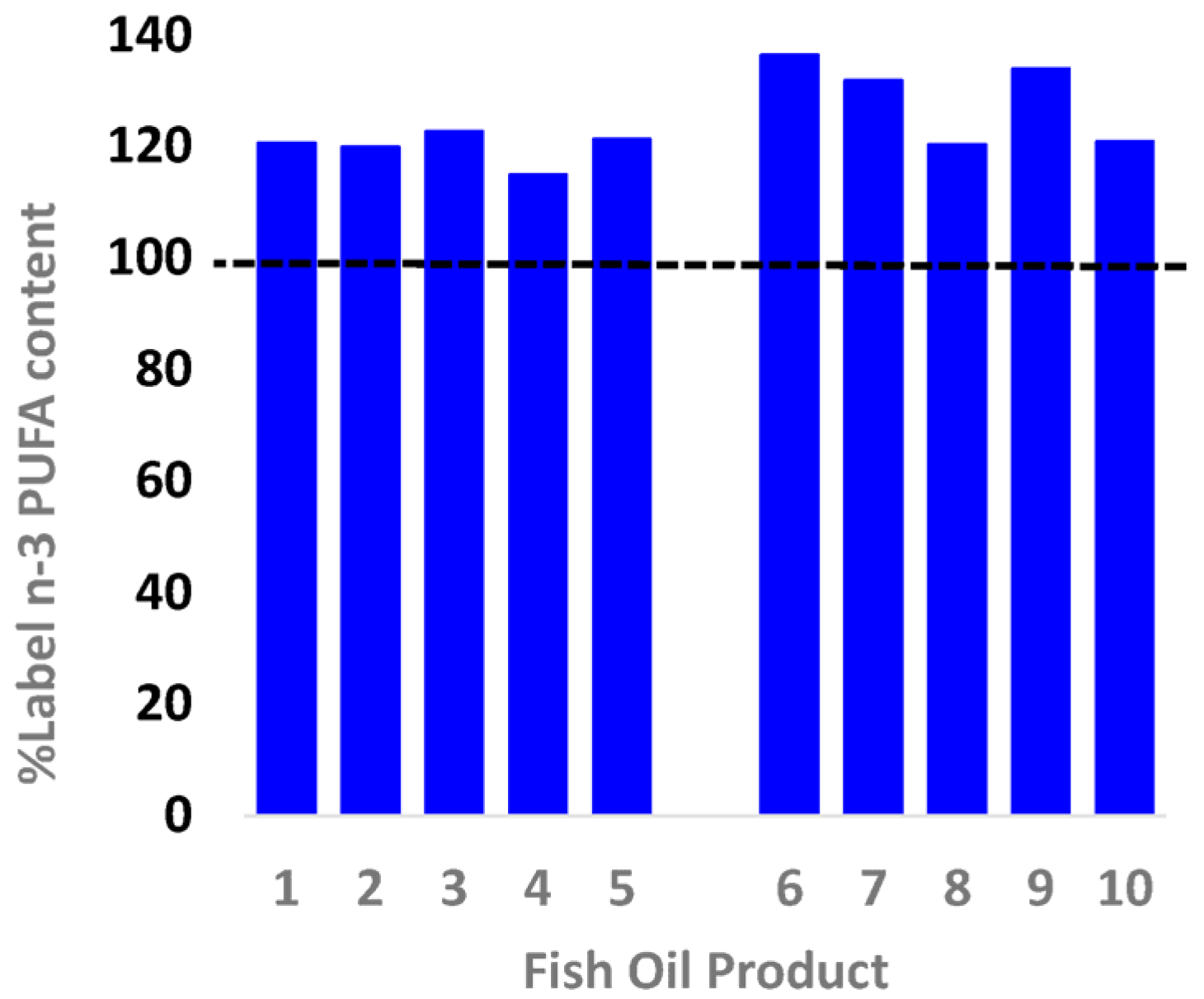 Table 1. Fish oil capsules—brand and composition details as supplied by manufacturers, and as determined in this study.
Sample numbers refer to Figure 1 and Figure 2. Cost per annum for fish oil concentrates is based on the cost of one capsule.Abbreviations: EPA, eicosapentaenoic acid; DHA docosahexaenoic acid; PUFA, polyunsaturated fatty acids; cap, capsule.