Colostrum and Mature Human Milk of Women from London, Moscow, and Verona: Determinants of Immune Composition
Previous Article in Journal

The Proportion of Anemia Associated with Iron Deficiency in Low, Medium, and High Human Development Index Countries: A Systematic Analysis of National Surveys

Background: Concerns about the nutritional status of Cambodian garment workers were raised years ago but data are still scarce. The objectives of this study are to examine the nutritional, hemoglobin and micronutrient status of female workers in a garment factory in Phnom Penh, Cambodia, and to assess if body mass index is associated with hemoglobin and/or micronutrient status. Methods: A cross-sectional survey was conducted among 223 female workers (nulliparous, non-pregnant) at a garment factory in Phnom Penh. Anthropometric measurements were performed and blood samples were taken to obtain results on hemoglobin, iron, vitamin A, vitamin B12 and inflammation status (hemoglobinopathies not determined). Bivariate correlations were used to assess associations. Results: Overall, 31.4% of workers were underweight, 26.9% showed anemia, 22.1% showed iron deficiency, while 46.5% had marginal iron stores. No evidence of vitamin A or vitamin B12 deficiency was found. Body mass index was associated with serum ferritin (negative) and serum retinol-binding protein (positive) concentrations, but not strongly. A comparison between underweight and not underweight workers resulted in distinctions for iron deficiency and iron deficiency anemia, with a higher prevalence among not underweight. Conclusions: The prevalence of underweight, anemia and poor iron status was high. Young and nulliparous female garment workers in Cambodia might constitute a group with elevated risk for nutritional deficiencies. Strategies need to be developed for improving their nutritional, micronutrient and health status. The poor iron status seems to contribute to the overall prevalence of anemia. Low hemoglobin and iron deficiency affected both underweight and those not underweight. Despite the fact that body mass index was negatively associated with iron stores, true differences in iron status between underweight and not underweight participants cannot be confirmed. View Full-Text
Keywords: underweight; anemia; micronutrient deficiency; garment factory; Cambodia; iron; vitamin A; vitamin B12; malnutrition; industry underweight; anemia; micronutrient deficiency; garment factory; Cambodia; iron; vitamin A; vitamin B12; malnutrition; industry
►▼ Show Figures 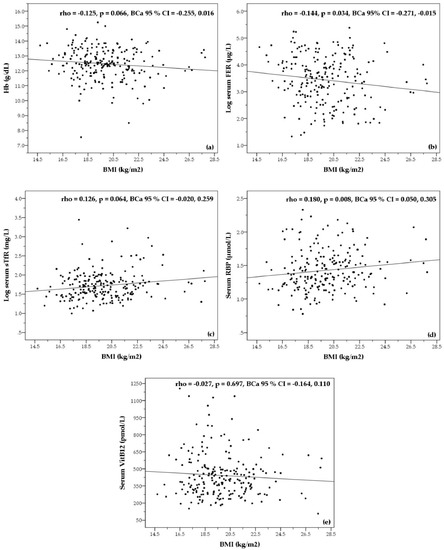