Altered cholesterol metabolism is believed to play a causal role in major pathophysiological changes in neurodegeneration. Several studies have demonstrated that the absence of apolipoprotein E (ApoE), a predominant apolipoprotein in the brain, leads to an increased susceptibility to neurodegeneration. Previously, we observed that genistein, a soy isoflavone, significantly alleviated apoptosis and tau hyperphosphorylation in SH-SY5Y cells. Therefore, we investigated the neuroprotective effects of dietary genistein supplementation (0.5 g/kg diet) in the cortex and hippocampus of wild-type C57BL/6 (WT) and ApoE knockout (ApoE−/−) mice fed a high-fat diet (HFD) for 24 weeks. Genistein supplementation alleviated neuroinflammation and peripheral and brain insulin resistance. Reductions in oxidative and endoplasmic reticulum stress were also observed in ApoE−/− mice fed a genistein-supplemented diet. Beta-secretase 1 and presenilin 1 mRNA levels and beta-amyloid peptide (Aβ) protein levels were reduced in response to genistein supplementation in ApoE−/− mice but not in WT mice. Although the absence of ApoE did not increase tau hyperphosphorylation, genistein supplementation reduced tau hyperphosphorylation in both WT and ApoE−/− mice. Consistent with this result, we also observed that genistein alleviated activity of c-Jun N-terminal kinase and glycogen synthase kinase 3β, which are involved in tau hyperphosphorylation. Taken together, these results demonstrate that genistein alleviated neuroinflammation, Aβ deposition, and hyperphosphorylation in ApoE−/− mice fed an HFD. View Full-Text
Keywords: ApoE−/− mice; brain; genistein; neurodegeneration; neuroinflammation ApoE−/− mice; brain; genistein; neurodegeneration; neuroinflammation
►▼ Show Figures 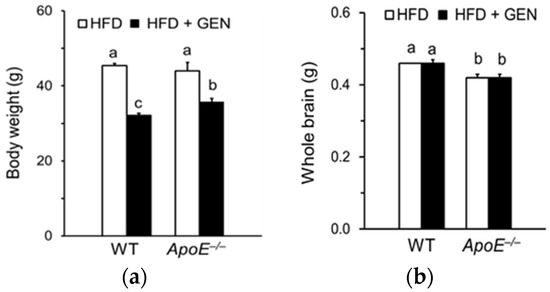