Substitution Models of Water for Other Beverages, and the Incidence of Obesity and Weight Gain in the SUN Cohort

Obesity is a major epidemic for developed countries in the 21st century. The main cause of obesity is energy imbalance, of which contributing factors include a sedentary lifestyle, epigenetic factors and excessive caloric intake through food and beverages. A high consumption of caloric beverages, such as alcoholic or sweetened drinks, may particularly contribute to weight gain, and lower satiety has been associated with the intake of liquid instead of solid calories. Our objective was to evaluate the association between the substitution of a serving per day of water for another beverage (or group of them) and the incidence of obesity and weight change in a Mediterranean cohort, using mathematical models. We followed 15,765 adults without obesity at baseline. The intake of 17 beverage items was assessed at baseline through a validated food-frequency questionnaire. The outcomes were average change in body weight in a four-year period and new-onset obesity and their association with the substitution of one serving per day of water for one of the other beverages. During the follow-up, 873 incident cases of obesity were identified. In substitution models, the consumption of water instead of beer or sugar-sweetened soda beverages was associated with a lower obesity incidence (the Odds Ratio (OR) 0.80 (95% confidence interval (CI) 0.68 to 0.94) and OR 0.85 (95% CI 0.75 to 0.97); respectively) and, in the case of beer, it was also associated with a higher average weight loss (weight change difference = −328 g; (95% CI −566 to −89)). Thus, this study found that replacing one sugar-sweetened soda beverage or beer with one serving of water per day at baseline was related to a lower incidence of obesity and to a higher weight loss over a four-year period time in the case of beer, based on mathematical models. View Full-Text
Keywords: Mediterranean cohort; water; soft drinks; beer; obesity; body weight Mediterranean cohort; water; soft drinks; beer; obesity; body weight
►▼ Show Figures 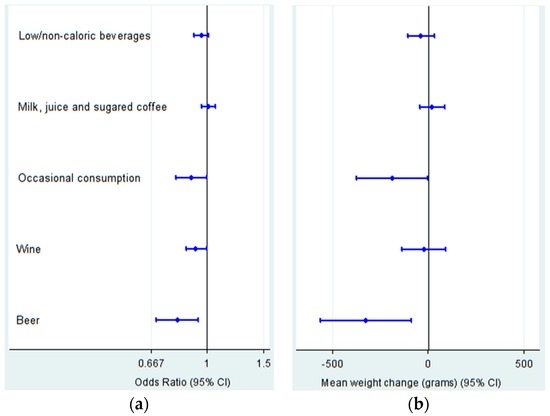 Fresán, U.; Gea, A.; Bes-Rastrollo, M.; Ruiz-Canela, M.; Martínez-Gonzalez, M.A. Substitution Models of Water for Other Beverages, and the Incidence of Obesity and Weight Gain in the SUN Cohort. Nutrients 2016, 8, 688.


Fresán U, Gea A, Bes-Rastrollo M, Ruiz-Canela M, Martínez-Gonzalez MA. Substitution Models of Water for Other Beverages, and the Incidence of Obesity and Weight Gain in the SUN Cohort. Nutrients. 2016; 8(11):688.


Fresán, Ujué; Gea, Alfredo; Bes-Rastrollo, Maira; Ruiz-Canela, Miguel; Martínez-Gonzalez, Miguel A. 2016. "Substitution Models of Water for Other Beverages, and the Incidence of Obesity and Weight Gain in the SUN Cohort." Nutrients 8, no. 11: 688.