Effects of Dietary Protein and Fiber at Breakfast on Appetite, ad Libitum Energy Intake at Lunch, and Neural Responses to Visual Food Stimuli in Overweight Adults

Plasma concentrations of metabolites along the choline oxidation pathway have been linked to increased risk of major lifestyle diseases, and peroxisome proliferator-activated receptors (PPARs) have been suggested to be involved in the regulation of key enzymes along this pathway. In this study, we investigated the effect of PPAR activation on circulating and urinary one-carbon metabolites as well as markers of B-vitamin status. Male Wistar rats (n = 20) received for 50 weeks either a high-fat control diet or a high-fat diet with tetradecylthioacetic acid (TTA), a modified fatty acid and pan-PPAR agonist with high affinity towards PPARα. Hepatic gene expression of PPARα, PPARβ/δ and the enzymes involved in the choline oxidation pathway were analyzed and concentrations of metabolites were analyzed in plasma and urine. TTA treatment altered most biomarkers, and the largest effect sizes were observed for plasma concentrations of dimethylglycine, nicotinamide, methylnicotinamide, methylmalonic acid and pyridoxal, which were all higher in the TTA group (all p < 0.01). Hepatic Pparα mRNA was increased after TTA treatment, but genes of the choline oxidation pathway were not affected. Long-term TTA treatment was associated with pronounced alterations on the plasma and urinary concentrations of metabolites related to one-carbon metabolism and B-vitamin status in rats. View Full-Text
Keywords: dimethylglycine; methylmalonic acid; one-carbon metabolism; peroxisome proliferator-activated receptors; tetradecylthioacetic acid dimethylglycine; methylmalonic acid; one-carbon metabolism; peroxisome proliferator-activated receptors; tetradecylthioacetic acid
►▼ Show Figures 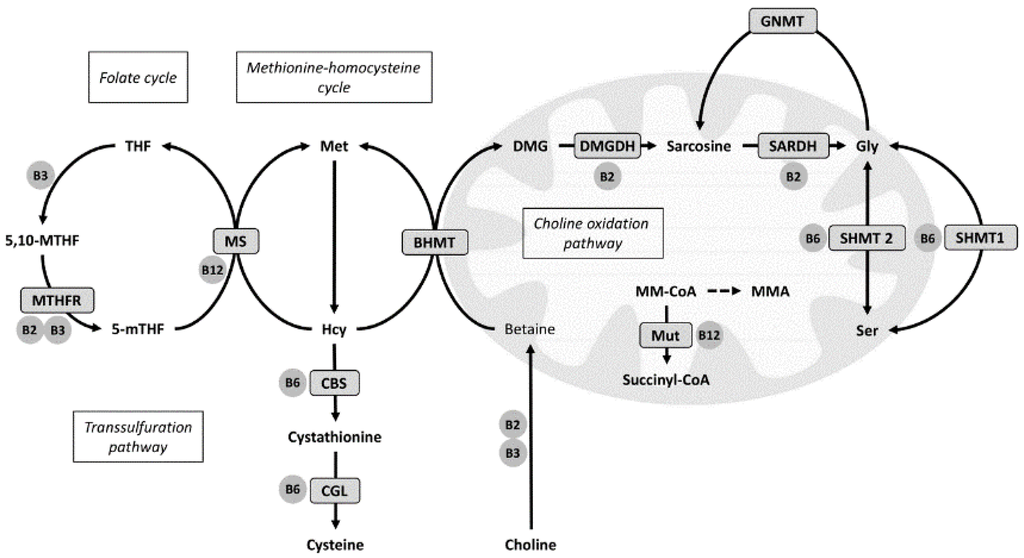