Is It the Appropriate Time to Stop Applying Selenium Enriched Salt in Kashin-Beck Disease Areas in China?
Previous Article in Journal

Pharmacokinetics and Toxicity of Sodium Selenite in the Treatment of Patients with Carcinoma in a Phase I Clinical Trial: The SECAR Study

Background: Sodium selenite at high dose exerts antitumor effects and increases efficacy of cytostatic drugs in multiple preclinical malignancy models. We assessed the safety and efficacy of intravenous administered sodium selenite in cancer patients’ refractory to cytostatic drugs in a phase I trial. Patients received first line of chemotherapy following selenite treatment to investigate altered sensitivity to these drugs and preliminary assessment of any clinical benefits. Materials and Methods: Thirty-four patients with different therapy resistant tumors received iv sodium selenite daily for consecutive five days either for two weeks or four weeks. Each cohort consisted of at least three patients who received the same daily dose of selenite throughout the whole treatment. If 0/3 patients had dose-limiting toxicities (DLTs), the study proceeded to the next dose-level. If 2/3 had DLT, the dose was considered too high and if 1/3 had DLT, three more patients were included. Dose-escalation continued until the maximum tolerated dose (MTD) was reached. MTD was defined as the highest dose-level on which 0/3 or 1/6 patients experienced DLT. The primary endpoint was safety, dose-limiting toxic effects and the MTD of sodium selenite. The secondary endpoint was primary response evaluation. Results and Conclusion: MTD was defined as 10.2 mg/m2, with a calculated median plasma half-life of 18.25 h. The maximum plasma concentration of selenium from a single dose of selenite increased in a nonlinear pattern. The most common adverse events were fatigue, nausea, and cramps in fingers and legs. DLTs were acute, of short duration and reversible. Biomarkers for organ functions indicated no major systemic toxicity. In conclusion, sodium selenite is safe and tolerable when administered up to 10.2 mg/m2 under current protocol. Further development of the study is underway to determine if prolonged infusions might be a more effective treatment strategy. View Full-Text
Keywords: sodium selenite; carcinoma; pharmacokinetics; maximum tolerated dose sodium selenite; carcinoma; pharmacokinetics; maximum tolerated dose
►▼ Show Figures 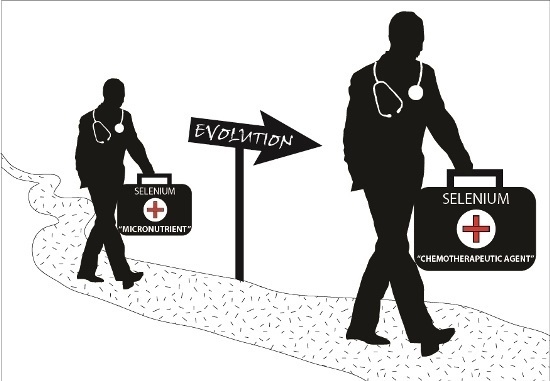