An Investigation of the Acute Effects of Oligofructose-Enriched Inulin on Subjective Wellbeing, Mood and Cognitive Performance
Previous Article in Journal

Association of Dietary Proportions of Macronutrients with Visceral Adiposity Index: Non-Substitution and Iso-Energetic Substitution Models in a Prospective Study

Little is known about the effect of (−)-epigallocatechin-3-gallate (EGCG) on angiogenesis in adipocytes. We aimed to test the effect of EGCG on the expression of vascular endothelial growth factor (VEGF) in adipocytes. The levels of VEGF secretion, the expression of VEGF message ribonucleic acid (mRNA) and VEGF protein in 3T3-L1 cells were measured by enzyme linked immunosorbent assay (ELISA), real time polymerase chain reaction (PCR), and immunofluorescence staining, respectively. The xCELLigence real time cell analysis system was used to study the growth and differentiation of 3T3-L1 preadipocytes. A coculture system was used to test the effects of 3T3-L1 cells on proliferation of human umbilical vein endothelial cells (HUVECs). The conditioned media derived from 3T3-L1 cells treated with or without EGCG was used to culture the HUVECs for a tube formation assay. Peroxisome proliferator-activated receptor γ (PPARγ) and CCAAT/enhancer binding protein α (C/EBPα), two transcription factors related to both adipogenesis and angiogenesis, were examined to explore the potential mechanism. We found that all the three measurements of VEGF expression in adipocytes (mRNA, protein and secretion in media) were reduced after EGCG treatment. The growth of HUVECs co-cultured with 3T3-L1 cells was significantly increased and the conditioned media from EGCG treated 3T3-L1 adipocytes inhibited tube formation in HUVECs. Both PPARγ and C/EBPα expression in adipocytes were decreased with EGCG treatment. In conclusion, findings from this study suggest that EGCG may inhibit angiogenesis by regulating VEGF expression and secretion in adipocytes. View Full-Text
Keywords: (−)-Epigallocatechin-3-gallate (EGCG); vascular endothelial growth factor (VEGF); 3T3-L1 cells; angiogenesis (−)-Epigallocatechin-3-gallate (EGCG); vascular endothelial growth factor (VEGF); 3T3-L1 cells; angiogenesis
►▼ Show Figures 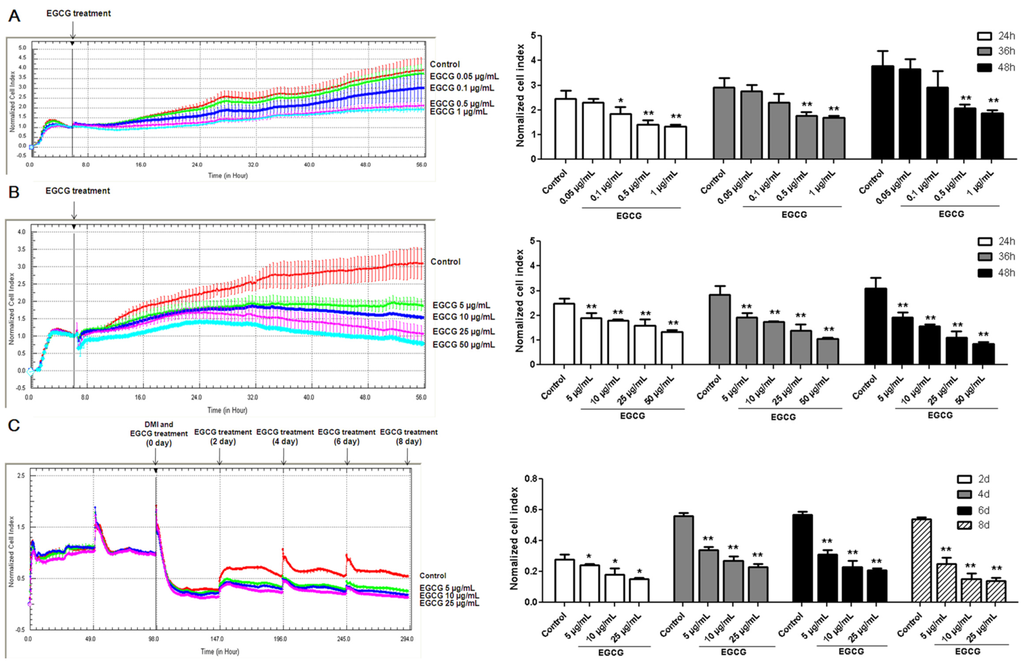