Health Behaviours during Pregnancy in Women with Very Severe Obesity

:
Although high body mass index (BMI) appears to confer a survival advantage in hemodialysis patients, the association of BMI with mortality in continuous ambulatory peritoneal dialysis (CAPD) patients is uncertain. We enrolled incident CAPD patients and BMI was categorized according to World Health Organization classification for Asian population. BMI at baseline and one year after the initiation of peritoneal dialysis (PD) treatment was assessed to calculate the BMI change (∆BMI). Patients were split into four categories according quartiles of ∆BMI. Kaplan-Meier method and Cox regression proportional hazard analysis were performed to assess the association of BMI on outcomes. A total of 1263 CAPD patients were included, with a mean age of 47.8 ± 15.0 years, a mean BMI of 21.58 ± 3.13 kg/m2. During a median follow-up of 25.3 months, obesity was associated with increased risk for cardiovascular diseases (CVD) death (adjusted hazard ratio (AHR) 2.01; 95% CI 1.14, 3.54), but not all-cause mortality. Additionally, patients with more BMI decline (>0.80%) during the first year after CAPD initiation had an elevated risk for both all-cause (AHR: 2.21, 95% CI 1.23–3.95) and CVD mortality (AHR 2.31, 95% CI 1.11, 4.84), which was independent of baseline BMI values.
Keywords:
continuous ambulatory peritoneal dialysis; body mass index; body mass index change; mortality

The World Health Organization (WHO) body mass index (BMI) categories of overweight and obesity are increasing globally. Many studies indicate that a high BMI is an independent risk factor for morbidity and mortality from cardiovascular disease (CVD) and certain cancers in the general population [1,2,3,4], and also elevates the risk for chronic kidney disease (CKD) as well as its progression to end-stage renal disease (ESRD) [5,6,7]. In contrast to the general population, an increased BMI is correlated with better outcomes in both prevalent and incident hemodialysis (HD) patients, including a lower risk of cardiovascular and all-cause mortality [8,9,10,11]. However, this “reverse epidemiology” or “paradoxical link” is controversial in peritoneal dialysis (PD) patients [12,13,14,15,16,17].
Most cohort studies of BMI and mortality published to date have been conducted in North American and European countries, few studies have been carried out in non-Western populations with the different BMI classification criteria. A large retrospective cohort study in the United States showed that PD patients with overweight or obese had lower or equivalent death rates relative to those with normal BMI [13]. The Australia and New Zealand Dialysis and Transplant (ANZDATA) analysis noted that obesity had adverse effects on both mortality and technical failure. Additionally, obesity in indigenous PD patients was independently associated with an increased risk for death and technique failure, whereas there was no significant relationship between BMI and mortality among patients of New Zealand Maori/Pacific Islander origin [14]. Moreover, high BMI in whites, African Americans, and Hispanics was found to be protective and associated with increased survival, even at extremely high BMI. Conversely, patients of Asians ethnic origin had worse mortality at high BMIs [18]. Accordingly, recent studies reported a U or J shaped curve in Chinese [19] and Korean [20] PD populations. In addition, data on BMI change in relation to mortality are limited in PD patients.
We conducted a retrospective cohort study to evaluate the association of BMI at the time of PD initiation and BMI change during the first year of PD therapy with mortality risk in Chinese CAPD patients.

We retrospectively reviewed the medical records of incident CAPD patients from our center between January 2006 and December 2011. Eligible patients were older than 18 years and had been on CAPD at least three months. We excluded patients who had a history of renal transplantation (n = 9), cancer (n = 12), or missing BMI data at baseline (n = 164). A total of 1263 patients were included in the final analysis. All patients were treated with glucose-based Dianeal solution (Baxter China Ltd., Guangzhou, China) and performed four exchanges per day of 2-L bags at the start of peritoneal dialysis.

This study was approved by the First Affiliated Hospital of Sun Yet-sen University Institutional Review Boards, and all subjects gave their written informed consent for participation.

All data used in this study were obtained from our database. Baseline demographic and clinical characteristics were collected at the initiation of PD therapy. Baseline BMI and laboratory parameters were evaluated three months after PD treatment. Presence of diabetes was defined as a self-reported history of physician diagnosis, the use of diabetes medication, or a fasting plasma glucose level of 126 mg/dL or greater in two separate occasions, or two-hour plasma glucose ≥200 mg/dL during the oral glucose tolerance [21]. Cardiovascular disease was defined as ischemic heart disease, congestive heart failure, cerebrovascular disease, and peripheral vascular disease, as previously described [22].
Body weight was assessed without PD fluid in the abdominal cavity. BMI was calculated as weight in kilograms divided by the square of height in meters (kg/m2) and categorized according to the World Health Organization (WHO) classification for Asian population: underweight (<18.5 kg/m2), normal weight (18.5–22.9 kg/m2), overweight (23.0–24.9 kg/m2), and obese (≥25.0 kg/m2). To investigate the association of BMI change (ΔBMI) and mortality, BMI at 3 (BMI1) and at 15 months (BMI2) were defined as baseline BMI and one year after the initiation of PD treatment, respectively. The calculation of BMI change was based on following formula: ΔBMI = (BMI2 − BMI1)/BMI1. To this end, 153 patients with missing data on BMI at last survey were excluded. We excluded an additional 230 patients who were treated with PD for less than one year due to death (n = 73), transfer to HD (n = 26), and renal transplantation (n = 85). We also excluded patients who transferred to other centers (n = 26) or were lost to follow-up (n = 20). Thus, 880 of 1263 patients were included in this sub-analysis. The patients were split into four groups according quartiles (Q) of ΔBMI: Q1 (<−0.80%); Q2 (−0.80%–2.69%, reference category); Q3 (2.70%–7.40%); Q4 (>7.40%).
Measurements of both peritoneal and renal Kt/V urea and creatinine clearances and residual glomerular filtration rate (rGFR) were calculated by using PD Adequest 2.0 for Windows software (Baxter Healthcare Corporation, Chicago, IL, USA). All biochemical and hematological tests were measured in the biochemical laboratory of the First Affiliated Hospital of Sun Yat-sen University.

The primary outcomes were all-cause and cardiovascular mortality. Cardiovascular mortality was defined as death from congestive heart failure, ischemic heart disease, cerebrovascular disease, peripheral vascular disease, arrhythmia (all of which were defined according to standard clinical criteria), and sudden death [23,24,25]. Sudden death was diagnosed as unexpected natural death occurring within one hour of the onset of symptoms or without any prior condition that appear fatal [22]. Survival time was defined as the time from enrollment to death or administrative censoring including transfer to hemodialysis, renal transplantation, transfer to other dialysis centers, loss to follow-up, or end of the study period at 31 December 2012.

A total of 1263 incident CAPD patients were enrolled, with a mean age of 47.8 ± 15.0 years, a mean BMI of 21.58 ± 3.13 kg/m2; 24.1% were diabetes and 48.2% had history of CVD at baseline. According to the WHO classification for Asia population, 15.1% were underweight, 56.0% were normal weight, 16.0% were overweight, and 12.9% were obese. Table 1 represented the baseline demographic and clinical data of the studied cohort by BMI category. In the entire cohort, overweight and obese subjects were more likely to be older and had higher proportion of diabetes, as compared with normal weight individuals. There was a trend towards higher levels of TG, hs-CRP, and rGFR with increased BMI values (all p < 0.001), whereas BMI categories were inversely related to total Kt/Vurea (p < 0.001). There were no significant differences among groups with respect to CVD history, MAP, hemoglobin, serum albumin, and TC.

During a median follow-up of 25.3 months (range 3.03–82.07), 176 patients (13.9%) died. Of them, 59.1% were attributable to cardiovascular causes, 6.3% were due to PD-related peritonitis, 34.6% to others (including no-PD-related infection, malignancies, cachexia, gastrointestinal bleeding, withdrawal from dialysis). Kaplan-Meier survival curve analysis showed significant lower overall survival (Figure 1A) and cardiovascular death-free survival (Figure 1B) in the obese patients, as compared with the other three BMI categories. Likewise, both all-cause and cardiovascular mortality rates increased in each successively higher BMI category, with lowest mortality rates in underweight patients (4.0 and 2.5 death/100 patient-years (pys), respectively) and highest in that of obese subjects (8.0 and 6.3 death/100 pys, respectively). Obesity was unadjusted associated with increased risk for all-cause and cardiovascular mortality (HR, 1.57 (1.03–2.39) and 2.07 (1.26–3.40), respectively), compared with patients with normal weight. However, these associations persisted for CVD death (HR, 2.01 (1.14–3.54), p = 0.004) but not for all-cause mortality after adjustment for covariates (Table 2), suggesting a negative effect of obesity in CVD mortality among PD population. The results were similar when BMI was modeled as continuous variable in Cox regression hazards model. The risk of cardiovascular mortality increased steadily by 9% for every unit increase in BMI (HR, 1.09 (1.01–1.18), p = 0.036). 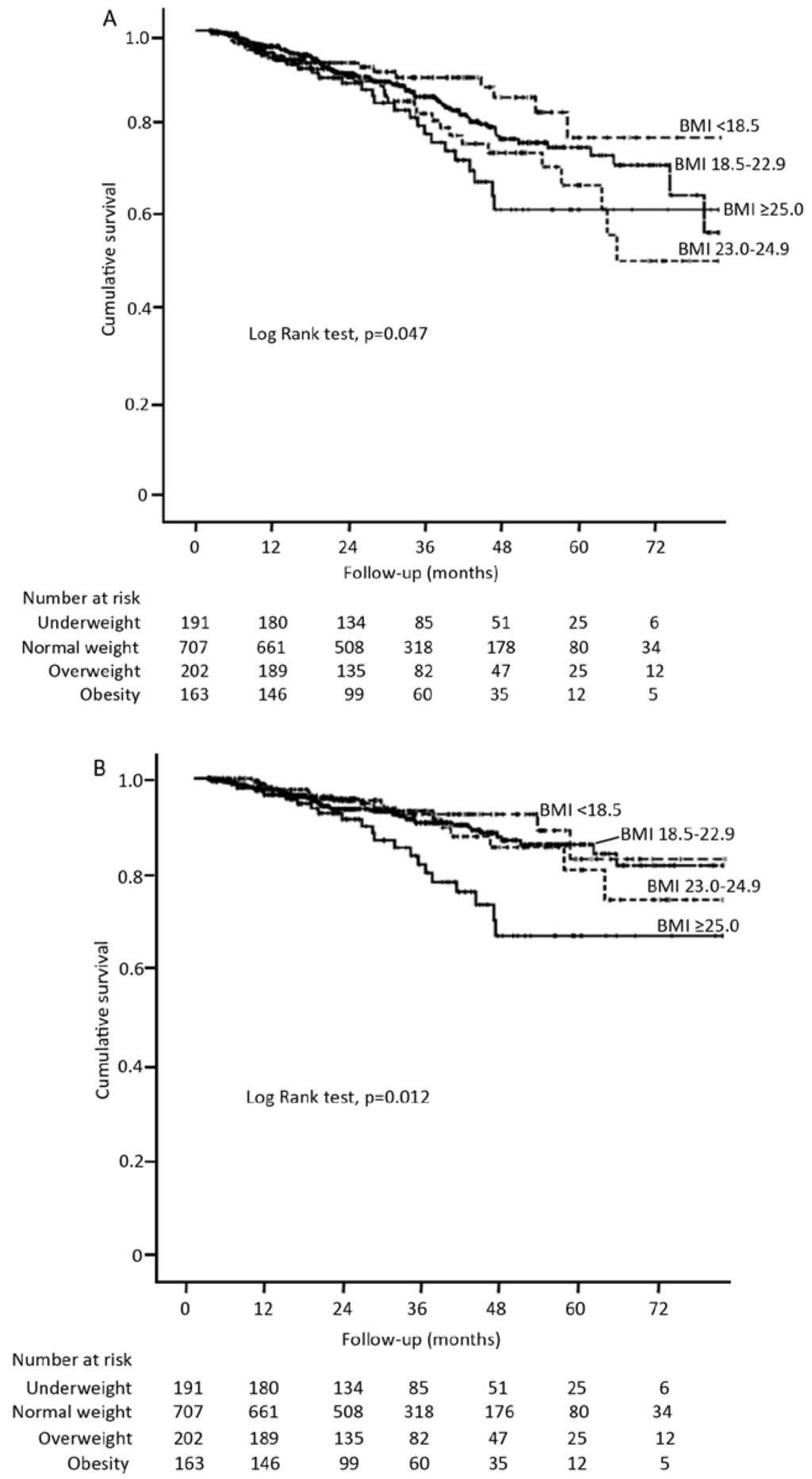 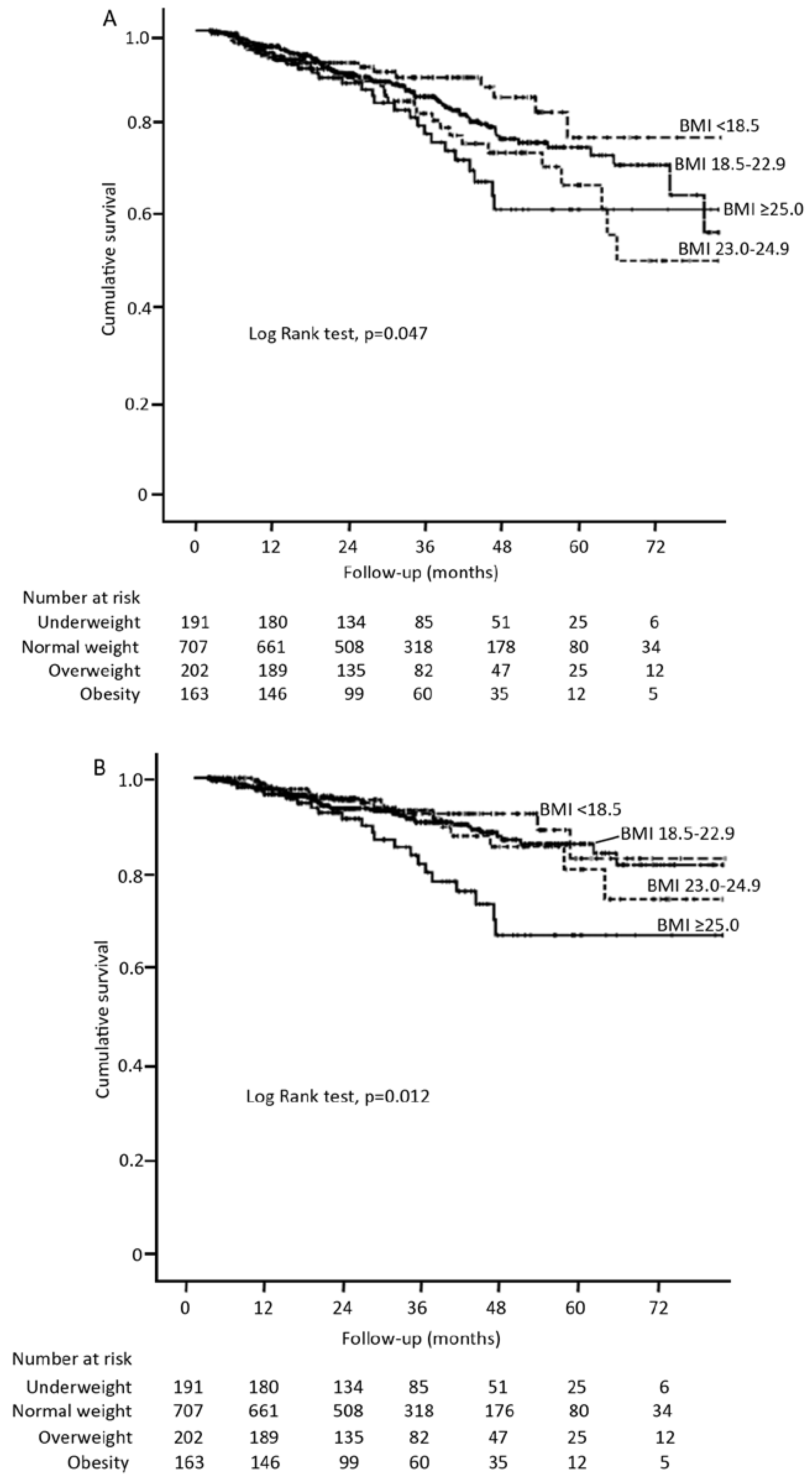 Table 3 showed the baseline characteristics of patients stratified by the quartiles distribution of ΔBMI (Q1, Q2, Q3 and Q4). There were no significant differences in baseline BMI categories and other demographic or clinical data across quartiles of ΔBMI, except for baseline BMI values, in which patients in the highest quartile of ΔBMI (Q4) tended to have lower baseline BMI, suggesting that patients in Q4 group had an increased BMI levels after the first year of PD treatment. Notably, patients in the lowest quartile of ΔBMI (Q1) were likely to reduce absolute or relative BMI values. Figure 2 depicted the survival curves for all-cause (A) and cardiovascular mortality (B) in the subgroup of 880 patients across quartiles of ΔBMI, revealing that patients in Q1 group had the worst prognosis, compared to those with relatively stable BMI levels (Q2). Table 4 showed the Cox proportional hazard for the BMI change, with the Q2 group as a reference. Consistently, only patients in Q1 group were at increased risk of both all-cause (HR 2.01 (1.18–3.41)) and cardiovascular mortality (HR 2.24 (1.13–4.44)), whereas no impact was observed among other groups. This negative association was even more prominent after adjusting for the covariates.

Table 3. Baseline characteristics of the study population by BMI change categories.
* Variables are presented as mean ± SD, median (interquartile range), or number (proportion). Abbreviation and definitions as listed in Table 1. 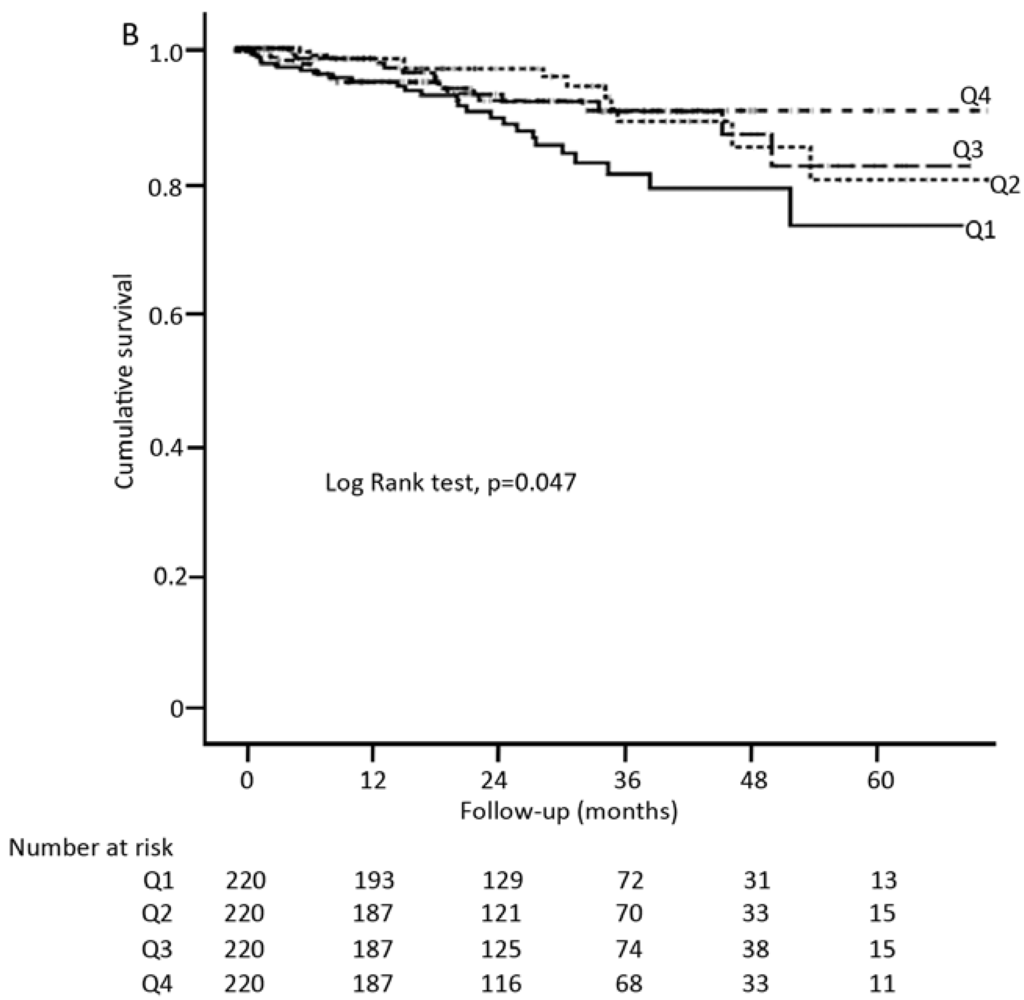 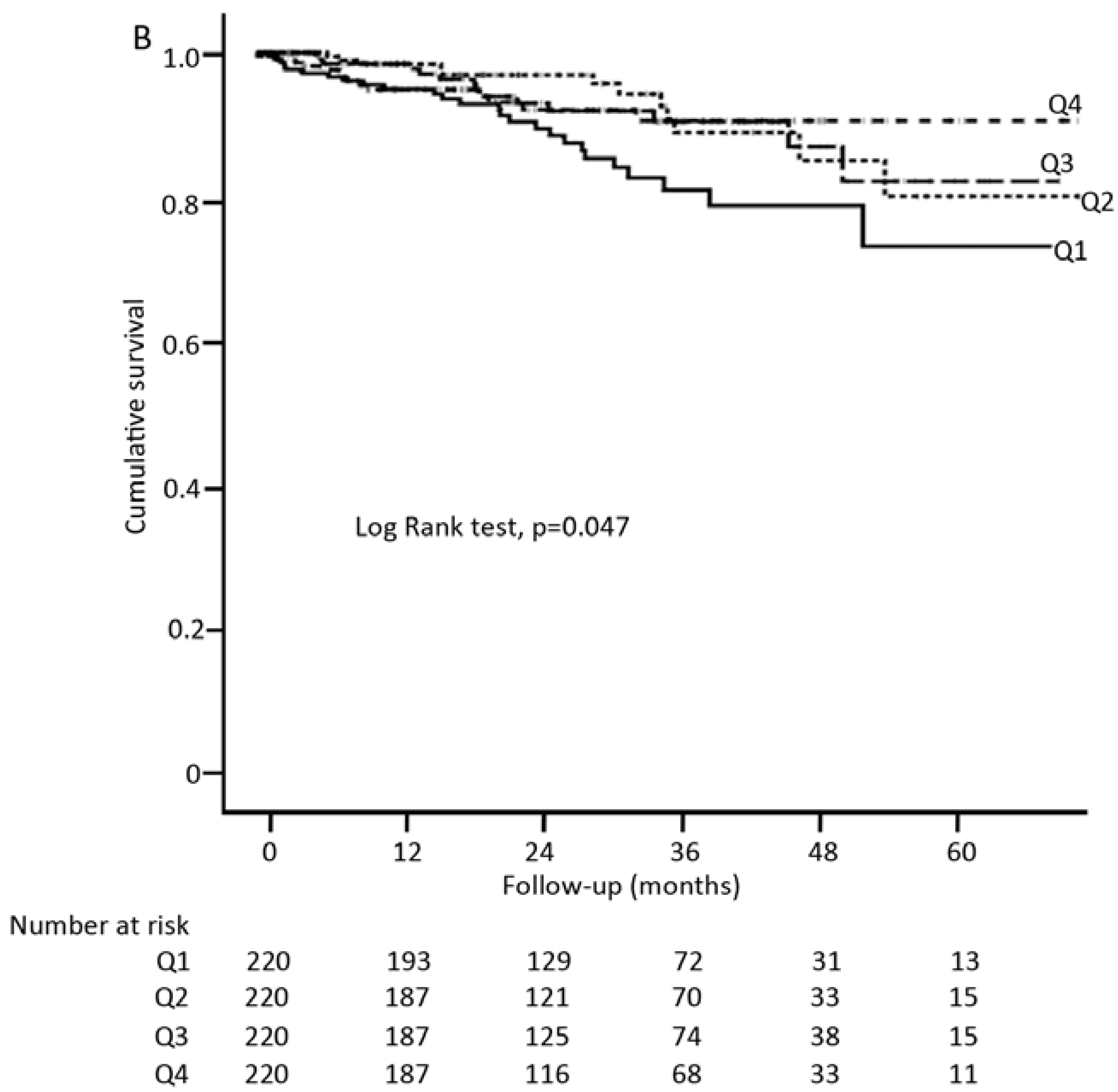 In conclusion, obesity at baseline is associated with higher cardiovascular mortality in Chinese CAPD patients. Further, BMI decrease more than 0.80% during the first year of PD therapy may confer an independent risk for both all-cause and CVD death in this population. These findings suggest that strategies to reduce mortality need to be targeted not only to obese PD patients but also toward those with a greater decrease in BMI.

The authors have no financial conflicts of interest to declare.