Colorectal cancer (CRC) is the third most common cancer worldwide. It is estimated that over 1.2 million new CRC cases emerged and 608,700 deaths occurred due to this condition in 2008. Australia, New Zealand, Europe, and North America have the highest incidence rates [1].
Diet has been the most studied etiological factor in colorectal carcinogenesis and may account for approximately 50% of the attributable risk in countries with high susceptibility, such as the USA, England, and Australia [2].
Vitamins and minerals have been suggested to influence the risk of developing CRC. Approximately 12% of colon cancer cases have been attributed to the Western-style diet [3]. On the other hand, Mediterranean diets, which are rich in Vitamin E (VE), have been associated with lower incidence of colon cancer [4], and the plasma level of VE has been correlated with reduced risk of having colon cancer [5].
CRC development is a multistage process that involves a number of pathological alterations, from discrete microscopic lesions in the mucosa, such as aberrant crypt foci (ACF), to malignant tumors [6]. ACF are focal colonic mucosa lesions consisting of at least one increased crypt. They are specifically induced by carcinogens and can be considered early morphological markers of colon carcinogenesis [7]. In this context, dimethylhydrazine (DMH) constitutes a complete carcinogen with high specificity for the colon—it initiates carcinogenesis and triggers the promoting steps [8].
Increased cell proliferation is one of the mechanisms that contribute to malignant transformation, so it may serve as a pre-malignant lesion marker [9]. Rapid cell proliferation is a key factor in cancer development, because it is not possible to repair DNA damage fully before cell division takes place [10].
Cyclooxygenases (COX) are key enzymes in prostaglandin synthesis. Overproduction of the isoform type 2, COX2, occurs in multiple stages of colon carcinogenesis [11]. COX2 expression in the tumor tissue acts as a prognostic factor—it is significantly related to histological type, depth of invasion, pathological stage, liver metastasis, lymphatic and venous invasion, TNM stage, and tumor recurrence [12,13].
Reactive oxygen species production occurs under basal conditions, which requires continuous deactivation of these compounds. Increased prooxidant synthesis causes oxidative stress and induces damage in biological molecules. Indeed, these processes have been implicated in a variety of degenerative pathologies, including cancer [14].
VE is a potent inhibitor of human cancer COX2 activity, cell cycle progression, and proliferation [15]; it may slow neoplastic transformation processes in humans [16]. Vitamin supplementation is especially common among the elderly, whereas CRC is usually diagnosed in people over 40 years. Recently, a study showed that dl-Alpha-Tocopheryl Acetate (ATA) supplementation (100, 200, or 300 mg daily) reduces oxidative stress in healthy adults [17]. Hence, the present study aimed to evaluate how different dietary VE (ATA) contents, administered during or after exposure to carcinogen, affects chemically induced colorectal carcinogenesis in rats. Evaluation relied on putative CRC biomarkers such as ACF incidence, oxidative stress parameters, and colonic COX-2 and PCNA expression.

This study was approved by the Ethics Committee for Animal Experimentation of Ribeirão Preto Medical School, University of São Paulo, in May 2007, under protocol number 051/2007.
The 80 male Wistar rats used in this work weighed approximately 300 g. The Central Animal Facility of the Ribeirão Preto Medical School, University of São Paulo supplied the animals. The rats were housed in individual stainless steel cages, at 25 °C, in a 12 h light/dark cycle, with ad libitum water intake. The chow was replaced three times a week, and consumption was measured throughout the experiment.
After acclimation for one week, the rats were randomly separated into eight groups of 10 rats each. All the groups received four doses of DMH. The exception was the Control group, which received saline injections (see Figure 1).
Animals were euthanized by decapitation 30 days after the fourth DMH injection. Blood was collected in Vacutainer® (BD Company, East Rutherford, NJ, USA) tubes and centrifuged at 2500 rpm for 10 min; serum samples were stored at −70 °C for later analysis. The large bowel was longitudinally excised in the mesenteric border throughout its full extension. The distal colon and rectum were fixed in 10% buffered formalin and embedded in paraffin using methods appropriate for the analysis. For histological (H & E stain) examination of the ACF, samples were embedded in face and sliced (5-μm sections), providing a view of the transversally cut of colonic crypts [18]. For immunohistochemistry, samples were embedded in ring shape maintaining the original transverse orientation of the organ.

Symmetrical dimethylhydrazine dihydrochloride (Sigma Co., St Louis, MO, USA) was dissolved in 1 mM EDTA (pH 7.0) immediately before use at a dose of 40 mg/kg of body weight. All the exposed groups received subcutaneous DMH injections twice a week, for two weeks.

The diet was prepared according to AIN-93M recommendations [19] (Table 1). A vitamin mix was added to the diet in the proportion of 1%, as recommended. dl-Alpha-Tocopheryl Acetate (ATA) 50% powder (C31H52O3, MW = 472.75) was included in the vitamin mix (RHOSTER®, São Paulo, Brazil) [20]. All the diet ingredients were weighed, added one by one, and manually mixed with the aid of a strainer. This process was repeated until a homogeneous diet was achieved. Thereafter, the diet was stored at −20 °C. The diet was prepared using soy oil. According to Slover (1971), every 100 g of refined soy oil contains 10.1 mg of alpha-tocopherol (which corresponds to approximately 4.87 IU of alpha-tocopherol/kg of diet [21]), 59.3 mg of gamma-tocopherol, and 26.4 mg of delta-tocopherol [22]. Table 2 lists the final concentration of VE in the diets.

Hepatic and serum levels of VE were measured by high-performance liquid chromatography [23]. Briefly, 0.2 g of liver or 500 μL of serum were homogenized in 2.0 mL of ethanol and 1.0 mL of hexane, to extract α-tocopherol. After centrifugation, the hexane layer was transferred to a clean vial, dried under nitrogen stream, reconstituted with mobile phase (methanol/dichloromethane/acetonitrile), and injected into the HPLC system equipped with a column C-18 (Shimpack CLC-ODS 4.6 × 25cm) (Shimadzu Corporation, Tokyo, Japan) and a pre-column measuring 4 mm × 1 cm (Shimadzu Corporation, Tokyo, Japan); the flow rate was 2.0 mL/min. Reading was performed at 292 nm; the final concentration was calculated using an internal α-tocopherol standard (Sigma-Aldrich Company, cod. T3251, St Louis, MO, USA). Hepatic glutathione (GSH) and malondialdehyde (MDA) levels were measured by spectrophotometry [24,25]. To analyze hepatic GSH levels, 200 mg of liver was homogenized in 8.0 mL of EDTA (0.02 M) in ice and 1.0 mL of 50% trichloroacetic acid (TCA). After centrifugation, the supernatant was separated and added to 4.0 mL of TRIS (0.4 M pH 8.9) and 0.1 mL of DTNB (0.01 M in methanol). Absorbance was read at 412 nm, 5 min after stirring with DTNB, against a blank with EDTA (0.02 M). The final concentration was obtained using a standard GSH curve in EDTA (0.02 M). For MDA analysis, 100 mg of liver was homogenized in 1 mL of 1.15% KCl. Then, 2 mL of TBA-TCA-HCl solution was added, and the mixture was heated for 15 min in boiling water bath. After that, the sample was centrifuged for 10 min, at 3000 rpm. The supernatant was separated, and the absorbance was read at 535 nm.
Plasma homocysteine concentrations were obtained by immunoassay using Immulite2000 kit® (Siemens Healthcare, Erlangen, Germany). Briefly, 15 μL of plasma and 300 μL of working solution were homogenized in a tube. Each tube was covered and incubated for 30 min at 37 °C in a water bath. Then, the treated sample was transferred to a cuvette and analyzed.

The colonic mucosa was screened to identify, quantify, and analyze the frequency and distribution of ACF, considered early biomarkers of carcinogenesis [6]. After staining with hematoxylin and eosin, microscopic examination of the distal colon mucosa was carried out at 400× magnification; the ACF were identified and quantified, and their frequency per unit of area (cm2) was calculated [18] (Figure 2).

Data are expressed as mean ± SEM. ANOVA test was used to determine significant differences among the groups, regardless of the Tukey’s Multiple Comparison Test for parametric analysis (weight gain, daily ingestion, and serum and hepatic VE, GSH, MDA, HCY, ACF, and iCOX2 levels) or Kruskall-Wallis Test with Dunn for non-parametric analysis (PCNA-Li). A multivariate analysis was performed to evaluate the effect of: (1) MDA, GSH, hepatic VE, homocysteine, iPCNA, and COX2 on ACF; (2) MDA, GSH, hepatic VE, and COX2 on homocysteine; (3) MDA, GSH, and hepatic VE on COX2; and (4) MDA, hepatic VE, and homocysteine on GSH. The significance level was set at p < 0.05 for all the analyses. The software programs SAS® 9 (SAS Institute Inc., Cary, NC, USA) and Graphpad Prism 4.0 (GraphPad Software Inc., La Jolla, CA, USA) were used. 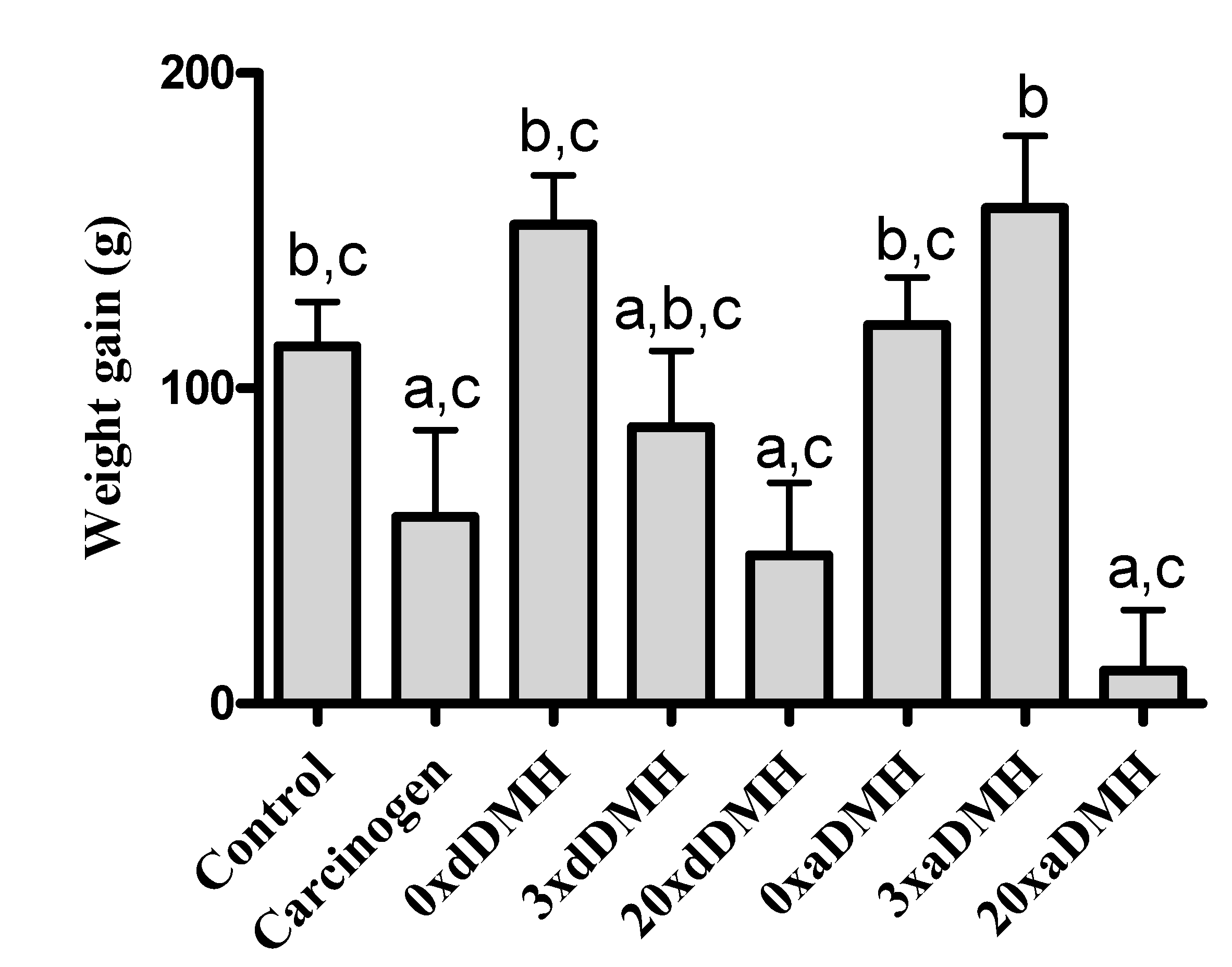 In the current study, we have employed different doses of DL-Alpha-Tocopheryl Acetate (ATA) at different times of exposure to carcinogen to investigate how Vitamin E affects the early stages of colon carcinogenesis. We have shown that oxidative stress participates in the process of cancer initiation and promotion. Diet modification after exposure to carcinogen increased PCNA and COX2 expression. Supplementation at 20× the recommended daily intake (1500IU) was as hazardous as the absence of Vitamin E (ATA), as judged from the increase in the incidence of ACF. Supplementation at three times the recommended daily intake lowered the incidence of ACF, cell proliferation, and COX2 expression, showing that supplementation with 225 IU has a protective role during the early stages of colorectal chemical carcinogenesis in rats.