Alcohol Consumption and Risk of Glioma: A Meta-Analysis of 19 Observational Studies
Previous Article in Journal

Potential Role of Carotenoids as Antioxidants in Human Health and Disease

Oxidative stress is defined as an imbalance between the formation of reactive oxygen species (ROS, including hydroxyl radicals, superoxide anions and hydrogen peroxide) and the antioxidant capacity [1]. Spermatozoa are particularly susceptible to oxidative stress due to the high membrane content of polyunsaturated fatty acid and the intracellular deficiency of antioxidant enzymes [2].
Low ROS levels are required for the regulation of the principal functions of sperm. Such functions are capacitation, acrosome reaction and fertilizing ability [3]. However, when levels are excessive, ROS attack polyunsaturated fatty acids in the sperm plasma membrane, leading to lipid peroxidation [4]. An imbalance between ROS generation and the antioxidant capacity of spermatozoa leads to oxidative stress, and the exposure of spermatozoa to this condition appears to be related to male infertility [3,5].
Seminal plasma and sperm are endowed with an array of antioxidant enzymes that act as free radical scavengers to protect spermatozoa against cellular damage caused by oxidative stress [6]. Such enzymes include glutathione peroxidase, glutathione reductase, superoxide dismutase, catalase, low molecular weight antioxidants, vitamin E, and vitamin C. Numerous attempts have been made to avoid or minimize oxidative stress in sperm by the use of antioxidants. However, the effectiveness of this strategy is still being debated [6,7].
A great variety of substances are antioxidants, including vitamins, enzymes and other free radical scavengers. Resveratrol (RVT) (trans-3,5,4′-trihydroxystilbene) is a polyphenol compound present in grapes, peanuts, berries and wine [8]. It is a phytoalexin whose biological function is to protect the plant in case of parasitic attack or environmental stress [9]. The literature contains numerous reports on the wide variety of properties of RVT, including its anti-inflammatory, cardioprotective, anticancer, antimicrobial, anti-aging and antioxidant effects [10]. This biological activity is carried out by a wide variety of mechanisms, one of the most important of which is antioxidant activity due to free radical scavenging [11]. Some recent studies in animal models demonstrate that RVT has positive effects on the hypothalamic-pituitary-gonad axis, blood testosterone levels, sperm production and sperm motility [12,13]. Furthermore, RVT may decrease germ cell apoptosis [14,15]. Despite these insights, the effect of RVT supplementation on male infertility has not yet been explored.
The aim of the present study was to explore the antioxidant activity of RVT against oxidative stress induced in mouse spermatozoa by exposure to ferrous iron/ascorbate in vitro.

Animals were maintained according to the norms of the Institutional Ethics Animal Care and Use Committee (CIECUAL), and in compliance with the Guidelines for Use and Care of Laboratory Animals. Male sexually mature (30 ± 2 g) and female immature CD1+ mice (5 old weeks) were obtained from the Institute of Health Sciences at the Autonomous University of Hidalgo (Hidalgo, Mexico). Animals were maintained under standard conditions, with a 12 h/12 h light/dark cycle, constant temperature (22 ± 2 °C) and humidity (50%), and food and water freely available in their home cages.

After animal sacrifice by cervical dislocation, testes-epididymis-vas deferent complexes were dissected. Spermatozoa were collected by flushing vas deferens and cauda epididymis lumens with 1 mL of Media M-16 (100 mM NaCl, 25 mM NaHCO3, 5.5 mM glucose, 2.6 mM KCl, 1.56 mM Na2HPO4, 0.5 mM sodium pyruvate, 1.8 mM CaCl2, 0.5 mM, MgCl2 and 20 mM sodium lactate, pH 7.4) at 37 °C. All medium were prepared with deionized water (Milli-Q Plus water system, Millipore). The spermatozoa were allowed to swim in the medium for 10 min at 37 °C. The sperm suspension was then transferred into a plastic tube and the motility and concentration of sperm were determined. Samples were used only if at least 80% of total sperm were motile and the concentration was at least 10 × 106 sperm/mL.
The sperm suspensions from three animals were pooled and divided into four experimental groups: (1) spermatozoa without treatment (Control); (2) spermatozoa treated with 15 µg/mL RVT during 15 min; (3) spermatozoa treated with 100 µM/150 µM ferrous iron/ascorbate for 45 min; and (4) spermatozoa treated with 15 µg/mL RVT during 15 min before treatment with 100 µM/150 µM ferrous iron/ascorbate for 45 min. After incubation, the following parameters were evaluated in the four groups: (i) sperm quality; (ii) mitochondrial transmembrane potential (Δψm); (iii) ROS generation; (iv) superoxide dismutase activity (SOD); (v) glutathione peroxidase (GPX) activity; (vi) lipid peroxidation; and (vii) in vitro fertilization (IVF) capability. For each parameter, three independent experiments were performed in duplicate.

Sperm parameters, including viability and motility, were evaluated according to a previously described method [16]. Spermatozoa motility (percent motile cells) was assessed in ten random fields using a phase contrast microscope (Carl Zeiss, Germany) at 400X. Sperm concentration was measured in a hemocytometer and expressed as one million/mL of suspension. Spermatozoa viability was determined by trypan blue exclusion assay. For each sample, 100–200 cells were counted.

Spermatozoa Δψm was measured using a spectrofluorometer (Perkin Elmer LS 55, Norwalk, CT, USA) and a MitoProbe JC-1 assay kit. JC-1 is a lipophilic cation that differentially labels mitochondria on the basis of membrane potential. After incubating a solution of 5 × 106 spermatozoa/mL with one of the treatments, two micro liters of JC-1 were added. High membrane potential was associated with emission at 590 nm (red), and low membrane potential with emission at 530 nm (green) when spermatozoa were excited at 488 nm. The Δψm was determined by a ratio of fluorescence intensity at 590 nm and at 530 nm.

Enzymatic activity of SOD was measured using the RANSOD assay kit (RANDOX). This method uses xanthine oxidase to generate superoxide radicals, which react with 2-(4-iodophenil)-3-(4-nitrophenol)-5-phenyltetrazolium chloride to form a red formazan dye. SOD activity was measured at 505 nm with a spectrophotometer (Power Wave Xs, Biotek Instruments Inc., Highland Park, Winooski, VT, USA), based on evaluating the degree of inhibition of xanthine to water and molecular oxygen. 10 × 106 Cells were treated with 1:1 0.1% triton X 100-PBS for 20 min. The cells were then centrifuged at 5000 rpm at 4 °C for 10 min. Finally, the supernatant was obtained for determining SOD activity.

Enzymatic activity of GPX was measured using the RANSEL assay kit (RANDOX). GPX catalyzes glutathione oxidation (GSH) by cumene hidroperoxide. Oxidized glutathione (GSSG) in the presence of glutathione reductase (GR) and NADPH is immediately changed to the reduced form with a concomitant oxidation of NADP+. GPX activity was measured as the decrease of absorbance at 340 nm with a spectrophotometer (Power Wave Xs, Biotek Instruments Inc., Highland Park, Winooski, VT, USA). 10 × 106 Cells were treated with 1:1 0.1% triton X 100-PBS for 20 min. The cells were then centrifuged at 5000 rpm at 4 °C for 10 min. Finally, the supernatant was obtained for determining GPX activity.

Malondialdehyde (MDA), other aldehydes and lipid hydroxyperoxides are able to form adducts with TBA (Sigma-Aldrich Co., St. Louis, MO, USA). The MDA concentration was used as an index of lipid peroxidation using the thiobarbituric acid reactive substances (TBARS) method [17]. Briefly, sperm suspensions (10 × 106 cells/mL) were added to a mixture containing 0.5% TBA and 3.75% BHT in methanol. Samples were heated in a boiling water bath for 30 min and then cooled. Absorbance was then measured at 532 nm with a spectrophotometer (Power Wave Xs, Biotek Instruments Inc., Winooski, VT, USA).

Eggs were obtained from immature female CD1+ mice. Super ovulation was induced by intraperitoneal injection of 10 IU Pregnant mare’s serum gonadotropin (PMSG), and 48 h later of 10 IU human chorionic gonadotropin (hCG). Approximately 14–16 h after the hCG injection, animals were sacrificed by cervical dislocation. The uterine ovary-salpinge-horn complex was dissected and suspended in M-16 medium. In each oviduct, the ampulla were punctured, and the cumulus-egg complex was extruded and placed in a solution of 0.1% (w/v) hyaluronidase with M-16 medium for seven min at 37 °C to remove cumulus cells. Then, cumulus free eggs were pooled and washed with M-16 medium to remove hyaluronidase. The fertilization assay was carried out only with mature eggs showing a polar body and with the zone intact.

For each experimental group 40 random eggs in 200 µL M-16 medium were placed on a standard slide with two polished spherical depressions of approximately 0.5 to 0.8 mm deep (VWR International). The eggs were then inseminated with 10 µL (1 × 105 cells) of one of four sperm suspensions (see Section 2.3). In each case, the sperm suspension had been previously capacitated in M-16 medium (supplemented with 4 mg/mL BSA) for 1 h at 37 °C. Gametes were co-incubated during 24 h at 37 °C in a high-humidity incubator under an atmosphere of 5% CO2/95% air. The embryos were examined for the presence of two to six cells as an indication of successful fertilization. The cells were fixed in 3% formaldehyde-PBS (v/v) and observed by phase contrast microscopy. Three independent experiments with different batches of cells were performed.

Statistical analysis was carried out with analyses of variance (ANOVA) followed by a Bonferonni correction to evaluate pair wise differences. A p-value < 0.05 was considered significant. Data are expressed as the means ± standard deviation (SD). All analyses were performed using the statistical software Stata 8.0 (Stata Corp., College Station, TX, USA).

3.1. Effect of RVT on Spermatozoa Quality

Ferrous iron/ascorbate (100 µM/150 µM) was used to induce oxidative stress and cause deleterious effects on spermatozoa quality. The results show a significant reduction (p < 0.001) in motility (11.0 fold) and viability (4.39 fold). On the other hand, pretreatment with 15 µg/mL of RVT for 15 min provided protection of spermatozoa. Compared to the spermatozoa treated only with iron/ascorbate, the RVT pretreated spermatozoa showed an 8.0 fold increase in motility and a 2.0 fold increase in viability (Table 1; p < 0.001). Regarding both parameters, there was a significant enhancement of spermatozoa quality. 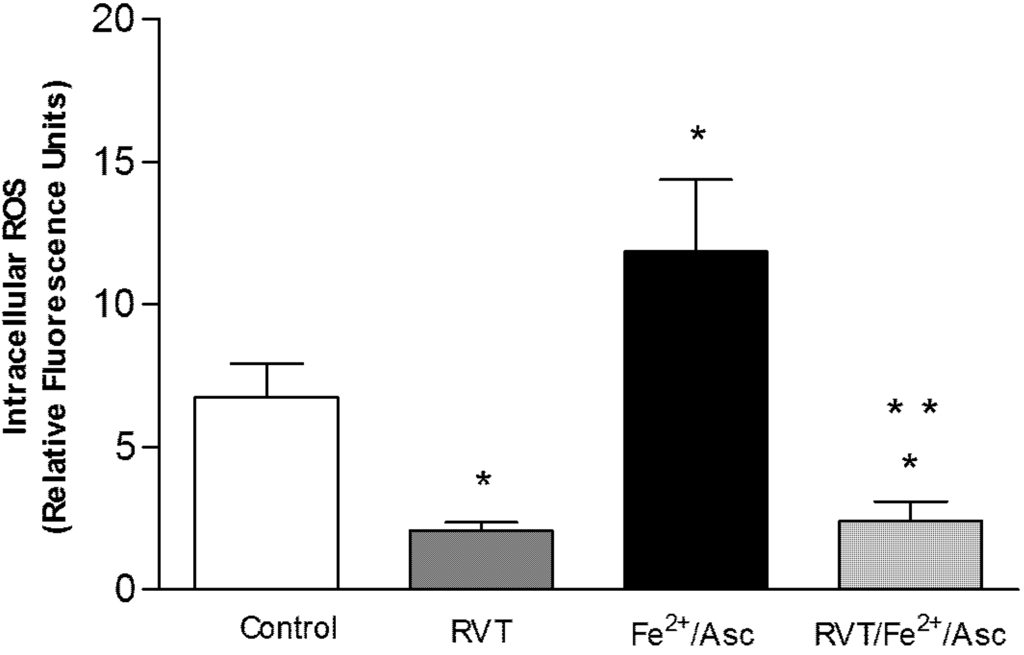 3.4. Effect of RVT on SOD and GPX Activity 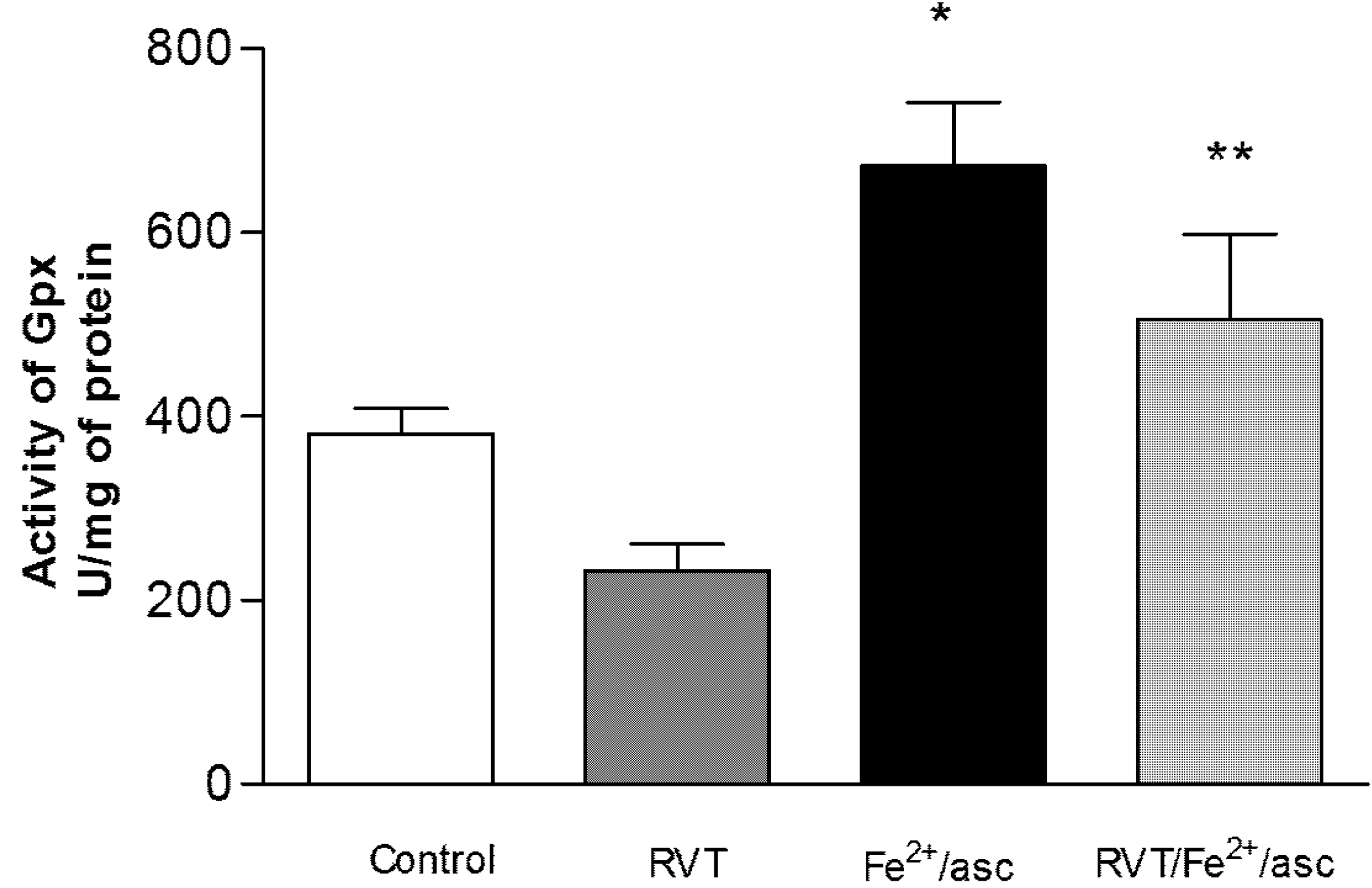 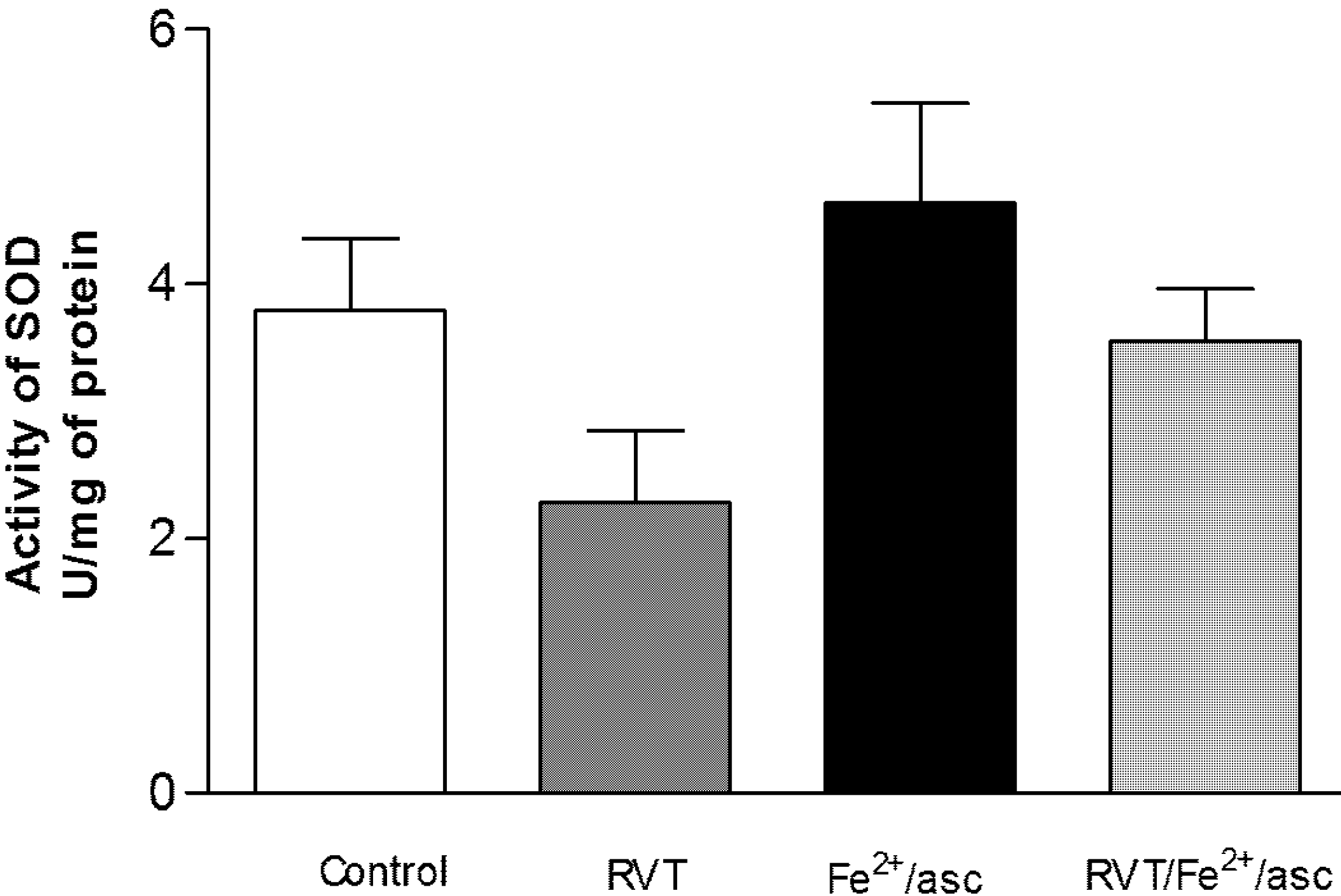 3.5. Effect of RVT on Lipid Peroxidation 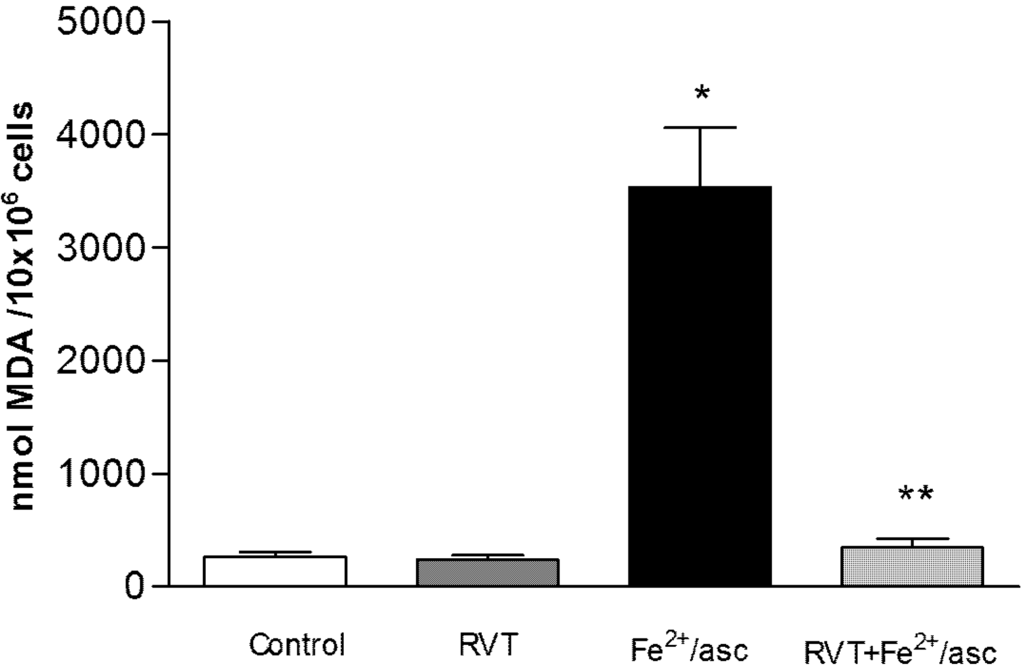 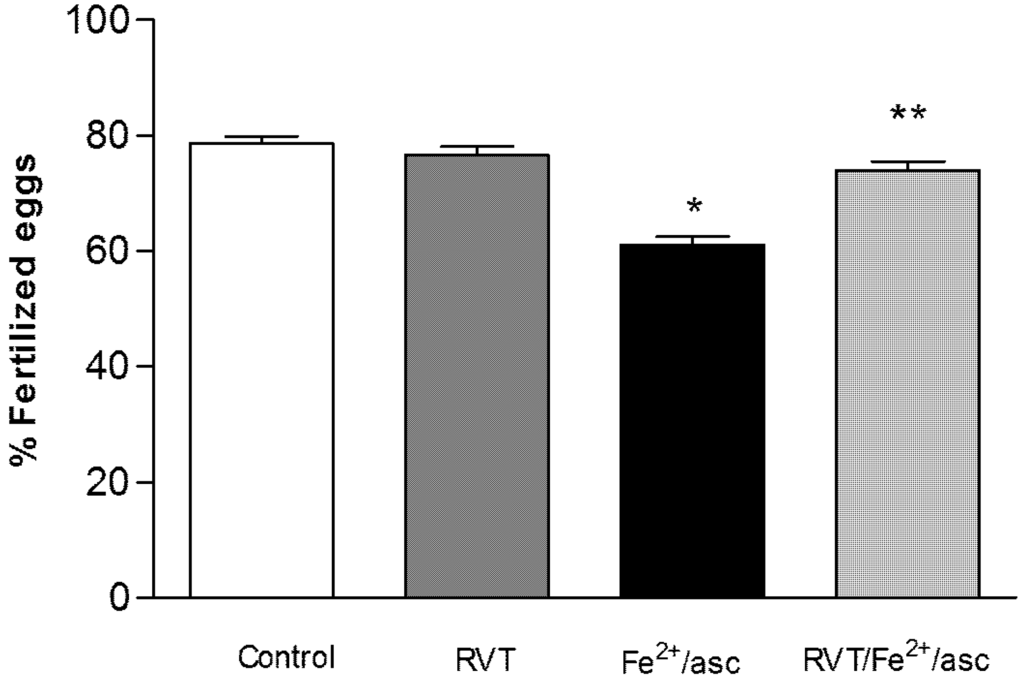 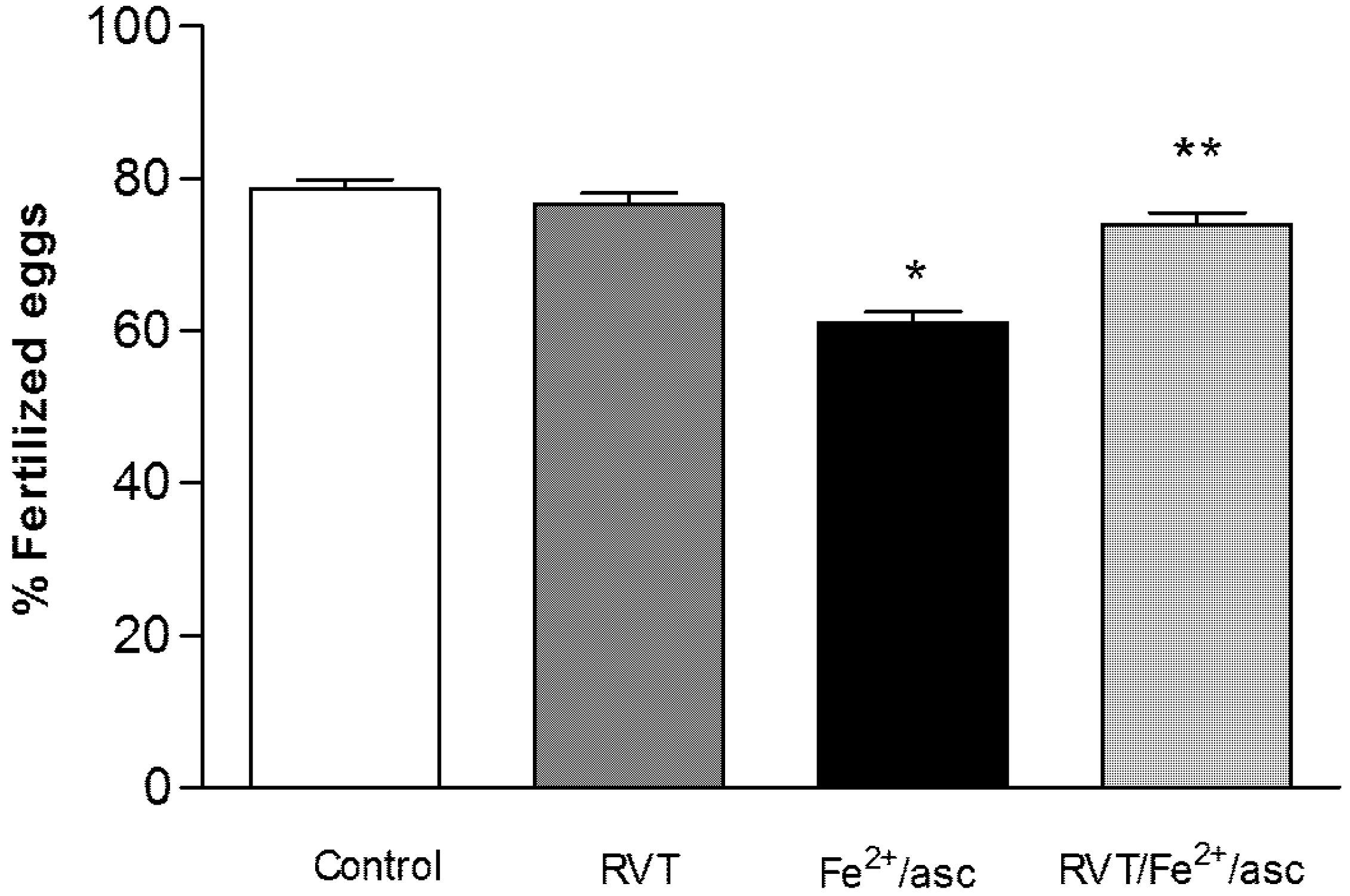 In conclusion, the present study provides evidence that RVT is a potent antioxidant in vitro. RVT was shown to protect spermatozoa from oxidative damage caused by ferrous iron/ascorbate through protection from lipid peroxidation and preservation of the IVF process.