Consumer Knowledge, Attitudes and Salt-Related Behavior in the Middle-East: The Case of Lebanon
Next Article in Special Issue

Thomas B. Campbell
14 and

There are around 35 million people living with Human immunodeficiency virus (HIV) infection in both developing and developed countries [1]. Access to antiretroviral therapy (ART), which can control but not cure the infection, has increased 30-fold since 2003 [1]. As treatment needs to continue for life and the number of people on ART is expected to rise further, with 7.1 million still lacking access to ART [1], it is important to understand ways to maximize treatment efficacy. Clinical treatment failure (World Health Organization (WHO) defined stage 3, 4 or death) and virologic treatment failure have been attributed to a variety of causes including malnutrition and micronutrient deficiencies [2,3,4]. Serum selenium deficiency has been associated with higher morbidity and mortality among ART-naïve HIV-infected people in multiple studies but there is mixed data to date on whether selenium supplementation has benefits in HIV population [5,6,7,8,9,10]. Whether selenium deficiency is associated with adverse treatment outcomes in the era of ART remains unanswered. In addition, selenium has a U-shaped link with other health outcomes including cancer and all-cause mortality [11], but whether or not that is relevant to HIV outcomes post-ART initiation is not known.
Selenium is an essential micronutrient and an essential component of the selenocysteine amino acid that is incorporated into 25 different selenoproteins [12]. Most of the well-studied selenoproteins, such as glutathione peroxidase (Gpx) and thioredoxin reductase (Txnrd), are antioxidants while other selenoproteins regulate metabolism or tissue development [13]. Antioxidants, such as selenoproteins, can counteract the oxidative stress and subsequent damage to DNA, proteins and lipids caused by pro-oxidants. This is important in the context of HIV infection as oxidative stress is increased during both HIV infection and ART treatment [14]. In addition, the selenoproteins Gpx and Txnrd1 have been shown to be important during HIV infection by decreasing viral activation and negatively regulating the HIV Tat protein, respectively [15,16].
Selenium concentration varies by geography [17] and has a bi-directional relationship with inflammation and the acute phase response [11,18]. Low concentrations of selenium have been linked with disorder of various tissues and diseases [11]. However, higher concentrations of selenium can also be detrimental as seen in US populations where a non-linear U-shaped relationship with cancer and all-cause mortality has been observed [11]. Studies to date in HIV-infected adults have not assessed the association between serum selenium deficiency pre-ART and clinical outcomes post-ART, while many pre-ART era studies did not adjust for inflammation and other confounders [11,19].
The objective of our study was to assess the risk factors for serum selenium deficiency pre-ART (baseline) and to determine if baseline serum selenium deficiency was independently associated with treatment outcomes after controlling for potential confounders including inflammation. To address these questions, we conducted a case-cohort study of ART naïve HIV-infected patients who initiated ART in the “Prospective Evaluation of Antiretrovirals in Resource Limited Settings (PEARLS)” trial [20]. Based on existing literature of HIV-infected ART-naïve individuals, we hypothesized that pre-ART serum selenium deficiency would be associated with greater treatment failure. Interestingly, we find that high levels of serum selenium concentrations, more so than serum selenium deficiency, were associated with adverse treatment outcomes and our results could have implications for selenium supplementation studies.

We performed a nested case-cohort study within the PEARLS trial [20], a randomized clinical trial of the AIDS Clinical Trial Group (ACTG A5175, clinicaltrials.gov NCT00084136). 1571 HIV-1 infected adults (≥18 years old) with CD4+ T cell count less than 300 cells/mm3 were enrolled and followed between May 2005 and May 2010. Participants were randomly allocated with equal probability to one of three different ART regimens: (A) efavirenz plus twice-daily lamivudine-zidovudine; (B) atazanavir plus didanosine EC and emtricitabine all given once daily; (C) and efarivenz plus emtricitabine-tenoforvir-DF once daily. Participants were from nine different countries: Brazil (n = 231), Haiti (n = 100), India (n = 255), Malawi (n = 221), Peru (n = 134), South Africa (n = 210), Thailand (n = 100), United States (n = 210) and Zimbabwe (n = 110). Participants who were pregnant or had an acute illness or other comorbidities, as described in detail elsewhere [20], were excluded from the study.
We selected the case-cohort design for this study as this allows for prevalence estimation and assessment of multiple outcomes [21,22]. The case-cohort was composed of a random subcohort of 270 participants along with the remaining cases in PEARLS that were not sampled as part of the subcohort (Figure 1). Cases were defined as either primary treatment failure or secondary treatment failure. Primary case outcome for this study was clinical treatment failure (incident WHO stage 3, 4 or death), and secondary case outcome was virologic failure (HIV-1 RNA levels ≥1000 copies/mL for two successive visits at ≥16 weeks after study entry). The random subcohort was selected by stratified random sampling with 30 participants from each of the nine countries. The total number of people in the case-cohort was dependent on whether the outcome of interest was primary (treatment failure, n = 470), or secondary (virologic failure, n = 411) (Figure 1).

Institutional review board and ethics committees at each participating institution and the Johns Hopkins University School of Medicine granted approval for this study. Appropriate guidelines from the United States Department of Health and Human Services for human experimentation were followed and participants granted written informed consent for the study.

Clinical history was measured at entry (pre-ART) and at weeks 2, 4, 8 and every four weeks after that through week 24, and every eight weeks through week 96. Diagnostic criteria were standardized across the different clinical sites. Body mass index (BMI) was measured at baseline and serum was collected at baseline and stored at −80 °C. Plasma HIV-1 viral load was assessed using Roche Amplicor Monitor Assay (v1.5, Roche Molecular Diagnostics, Branchburg, NJ, USA). Baseline serum selenium concentration was measured using a Perkin-Elmer Analyst 600 graphite furnace atomic absorption spectrometer at Johns Hopkins University and were run in batches. Serum selenium deficiency was defined as serum concentrations of <85 μg /L based on previous studies of HIV and selenium [23,24,25]. C-reactive protein (CRP) was measured using an enzyme-linked immunosorbent assay (ELISA) kit (R & D Systems). Serum albumin, hemoglobin and CD4 cell counts were also assessed at site laboratories that were all externally quality assured as part of the National Institute of Health (NIH) Division of AIDS and ACTG Network lab quality assurance [20]. 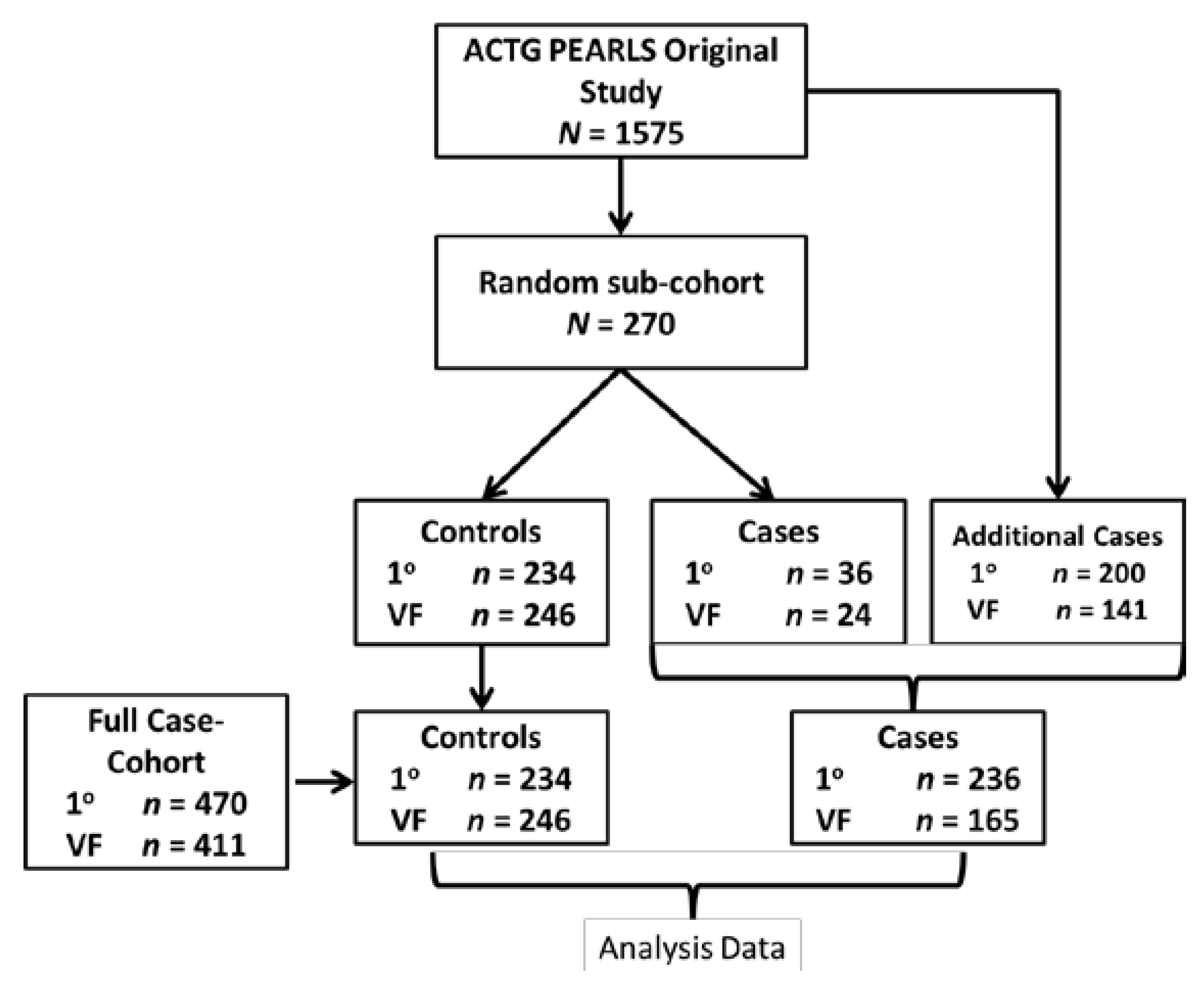 The random subcohort was used for prevalence estimates of baseline serum selenium deficiency by various baseline characteristics. Differences in serum selenium deficiency prevalence by covariates were tested using the Wilcoxon’s rank sum test for continuous variables and Fisher’s exact test for categorical variables. CRP and viral load variables were log-transformed. Odds ratios (OR) and 95% confidence intervals (CI) of serum selenium deficiency at baseline were estimated by covariates using univariable and multivariable logistic regression. Age, gender and albumin were forced in multivariable models due to evidence of association with selenium in past studies [19,26] and also because they had a trend of association (p < 0.1) in univariable models. BMI was forced in the model to control for malnutrition.
Associations between outcomes and serum selenium concentrations adjusting for other covariates were estimated for the full case-cohort using univariable and multivariable Cox proportional hazard models stratified by treatment and country for clinical failure and by country for virologic failure. Stratifying by treatment in addition to country for virologic failure models did not change the results (data not shown). Barlow weighting [21] and robust standard errors were used in the Cox models to account for the stratified design of the study.
Selenium was categorized as either normal or selenium deficient based on serum cutoffs (<85 μg/L) or as quartiles of serum selenium for univariable and multivariable analyses of clinical treatment failure and virologic failure. Multivariable model 1 was used to determine association of selenium status (binary or quartile) with clinical failure after adjusting for gender, age, BMI, CD4 count, viral load, hemoglobin and albumin while multivariable model 2 also adjusted for inflammation (CRP). Multivariable model 3 was used to determined association of selenium status with virologic failure after adjusting for gender, age, BMI, CD4 count, viral load, treatment arm while multivariable model 4 also adjusted for CRP. Further adjusting for albumin and hemoglobin in model 3 and 4 did not affect the results and a simpler model is presented given that previous studies do not usually include these variables in virologic failure models. Race was collinear with country and was not included in multivariable models. STATA version 13 (Stata Corp, College Station, TX, USA) and S-plus Tibco Spotfire version 7.2 (TIBCO, Palo Alto, CA, USA) were used for data analysis. Forest plots were created using GraphPad Prism Software version 5 (GraphPad software Inc., La Jolla, CA, USA).

In conclusion, high concentrations of serum selenium pre-ART was associated with increased clinical failure in our multi-country study. Supplementation of selenium for HIV-infected people initiating ART should be handled with caution, as we need further studies in diverse settings to determine the range of selenium in the population and the effect of low or high selenium on ART outcomes.

The authors thank the Prospective Evaluation of Antiretrovirals in Resource Limited Settings (PEARLS) study participants for volunteering their time and efforts. This work was supported by the AIDS Clinical Trials Group and the US National Institute of Allergy and Infectious Diseases (AI68636, AI069450); and the US National Institutes of Health (R01 AI080417 to AG). This parent trial A5175 was also supported in part by Boehringer-Ingelheim, Bristol-Myers Squibb, Gilead Sciences, and GlaxoSmithKline. The funders had no role in study design, data collection and analysis, decision to publish, or manuscript preparation.