Aim: This study investigated how performance was affected after soccer players, in a postprandial state, ingested a 7% carbohydrate (CHO) solution compared to a placebo (0% CHO) during a simulated soccer match. Methods: Using a double-blind placebo-controlled design, 22 trained male league soccer players (age: 24 ± 7 years, wt: 73.4 ± 12.0 kg, VO2max: 51.8 ± 4.3 mL O2/kg/min) completed two trials, separated by 7 days, during which they ingested, in random order, 700 mL of either a 7% CHO or placebo drink during a simulated soccer match. Ratings of perceived exertion (RPE), agility, timed and run to fatigue were measured during the trials. Results: Change in agility times was not altered by CHO vs. placebo ingestion (0.57 ± 1.48 vs. 0.66 ± 1.00, p = 0.81). Timed runs to fatigue were 381 ± 267 s vs. 294 ± 159 s for the CHO and placebo drinks, respectively (p = 0.11). Body mass modified the relationship between time to fatigue and drink ingestion (p = 0.02 for drink × body mass), such that lower body mass was associated with increased time to fatigue when the players ingested CHO, but not placebo. RPE values for the final stage of the simulated soccer match were 8.5 ± 1.7 and 8.6 ± 1.5 for the CHO and placebo drinks respectively (p = 0.87). Conclusions: The group data showed that the 7% CHO solution (49 g CHO) did not significantly improve performance during a simulated soccer match in league soccer players who had normal pre-match nutrition. However, when adjusting for body mass, increasing CHO intake was associated with improved time to fatigue during the simulated soccer match. View Full-Text
Keywords: intermittent exercise; supplementation; sports drinks; football intermittent exercise; supplementation; sports drinks; football
►▼ Show Figures 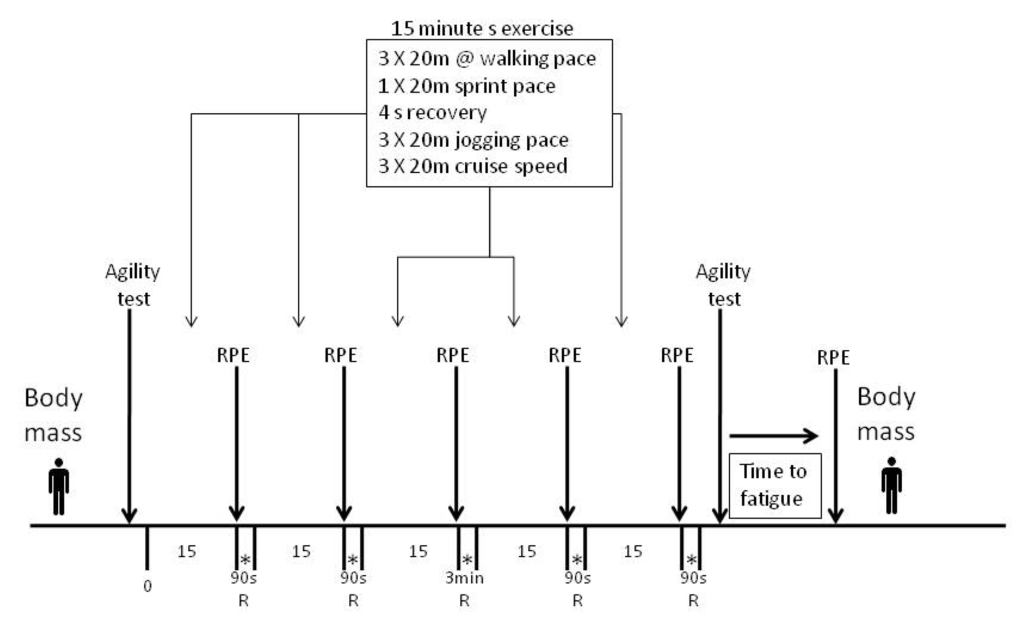