Poor Knowledge and Practices Related to Iodine Nutrition during Pregnancy and Lactation in Australian Women: Pre- and Post-Iodine Fortification
Next Article in Special Issue

Different Dietary Protein and PUFA Interventions Alter the Fatty Acid Concentrations, but Not the Meat Quality, of Porcine Muscle

Cardiovascular disease (CVD) is a severe problem in developed and developing countries. WHO warns that 17.3 million people died from CVD in 2008, and 23.6 million people a year will die from CVD by 2030. CVD is a disease mainly caused by atherosclerosis [1]. One of the risk factors of atherosclerosis is hypercholesterolemia [2,3] and low density lipoprotein cholesterol (LDL-C) is the major cause of onset of the atherogenic process [1] Soy foods, traditional food products in Asia [4], have been known to exhibit lipid metabolism-modulating effects since the 1970s. The major bioactive ingredients of soy foods are soy proteins and isoflavones. Much evidence on soy protein has been reported from studies on experimental animals and human subjects. Soy protein in the diet reduces the concentration of total cholesterol (TC) and LDL-C in plasma or serum [5,6,7,8]. Sugano et al found that the undigested insoluble fraction obtained by treating soy protein with microbial protease has a hypocholesterolemic effect in rats fed a cholesterol-enriched diet [8]. Soy protein also reduced the triglyceride (TG) concentrations in the plasma and liver in experimental animals and human [5,9,10,11,12]. Another bioactive ingredient, isoflavone, has also shown much lipid metabolism-modulating effects. Isoflavone lowered serum TC and LDL-C levels in a meta-analysis of 11 randomized controlled trials in humans [13]. In contrast, alcohol washed-soy protein, isoflavone-free form, decreased lowering of plasma TC level compared with intact soy protein on rodents [14]. Isoflavone extracted from soy protein decreased plasma TC level in rodents [14]. As soymilk has a lot of soy protein and isoflavone, the intake of soymilk is known to reduce plasma and hepatic lipid levels [15,16]. However, the taste of soymilk is not always favorable for everybody. As fermented soymilk prepared by Bifidobacterium breve YIT 4065 improved the lipid metabolism [17,18], we prepared fermented soymilk using lactic acid bacteria of vegetable origin. We found the effects of lactic acid-fermented soymilk containing okara on the plasma and hepatic lipid profiles and expression of the lipid metabolism-related genes in rats [19]. The administration of fermented soymilk lowered plasma cholesterol and TG levels compared with that of soymilk. Therefore, we assumed that some bioactive components produced from soymilk by lactic acid fermentation lowered plasma cholesterol and TG levels through modulating hepatic gene expression [20]. As a previous animal experiment was mainly investigated using rats fed AIN-93G diet [20], the effects of fermented soymilk on rats fed a normal diet were found. However, the effect of fermented soymilk on a high cholesterol diet is not yet resolved. Therefore, in the present study, we examined changes in plasma and hepatic cholesterol levels and analyzed the expression of lipid metabolism-related genes of the liver to clarify hypocholesterolemic effects of fermented soymilk on rats fed a high cholesterol diet.

2.3. Measurement of the Plasma and Liver Metabolic Parameters

All the rats were subjected to X-ray computed tomography (CT) analysis using LaTheta LCT-200 (Aloka, Tokyo, Japan) under anesthesia at initial and end points of feeding period. Contiguous images at 3-mm slice between 12th breast bone and testes were used for quantitative assessment using LaTheta software (version 2.0) according to the manufacturer’s protocol. Densitometric calculations of fat tissues were performed using CT software (Aloka, Tokyo, Japan) using attenuation number thresholds of −500 to −140 for fat tissue. Visceral fat and subcutaneous fat were distinguished by CT value and evaluated quantitatively. The difference of each fat mass between initial and end points of feeding period was measured.

The expression of mRNA was quantitatively measured by real-time RT-PCR, using the model 7500 (Applied Biosystems, Foster City, CA, USA) and related reagent kits according to the manufacturer’s protocol. Total RNA was extracted from liver tissues with the RNeasy mini kit (Qiagen). Complementary DNA (cDNA) was synthesized from the RNA using the Prime Script® RT reagent Kit with gDNA Eraser (Perfect Real Time) (TAKARA BIO, Shiga, Japan). The following TaqMan gene expression assays were conducted using Rn01495769_ml for Srebf1 (mRNA of SREBP-1), Rn00569117_ml for Fasn (mRNA of FAS), Rn00581185_ml for Nr1h3 (mRNA of LXRα), Rn01502638_ml for Srebf2 (mRNA of SREBP-2), and Rn00564065_ml for Cyp7a1 (mRNA of CYP7a1) (Applied Biosystems) as the PCR primer set for the real-time PCR. Rn99999916_s1 for GAPDH was used as an endogenous control. Real-time PCR was performed with the TaqManUniversal PCR master mix (Applied Biosystems). Data were normalized to GAPDH RNA expression, and the fold was presented as a ratio to the C group.

The results are presented as the mean ± standard error. Tukey’s multiple comparison was used for blood analysis at each feeding time, hepatic lipid parameters and fat mass increased between initial and end points of feeding period. Student’s t-test was used for the real time RT-PCR data of hepatic gene expression. The statistical analyses were performed with SPSS 12.0 J for Windows.

All the rats were subjected to X-ray CT analysis to calculate visceral and subcutaneous fat masses at initial and end points of the feeding period. Increased mass of each fat tissue between the initial and end points was calculated. The F-5 and F-10 groups suppressed the increased amount of visceral fat mass (Figure 1A). Especially, the F-10 group significantly reduced the amount compared with the C groups. Similarly, the increased mass of subcutaneous fat was significantly suppressed in the F-10 group (Figure 1B). 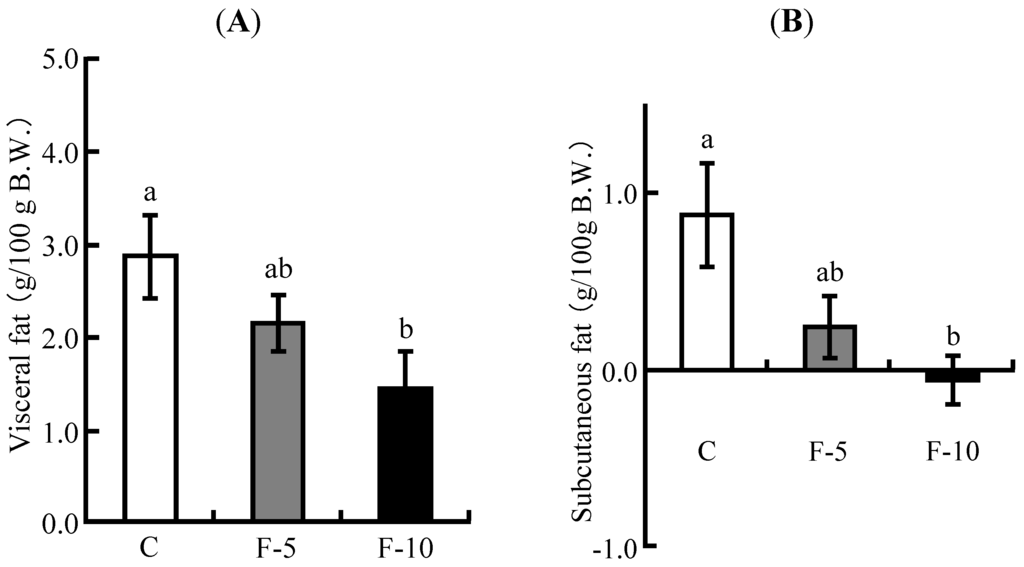 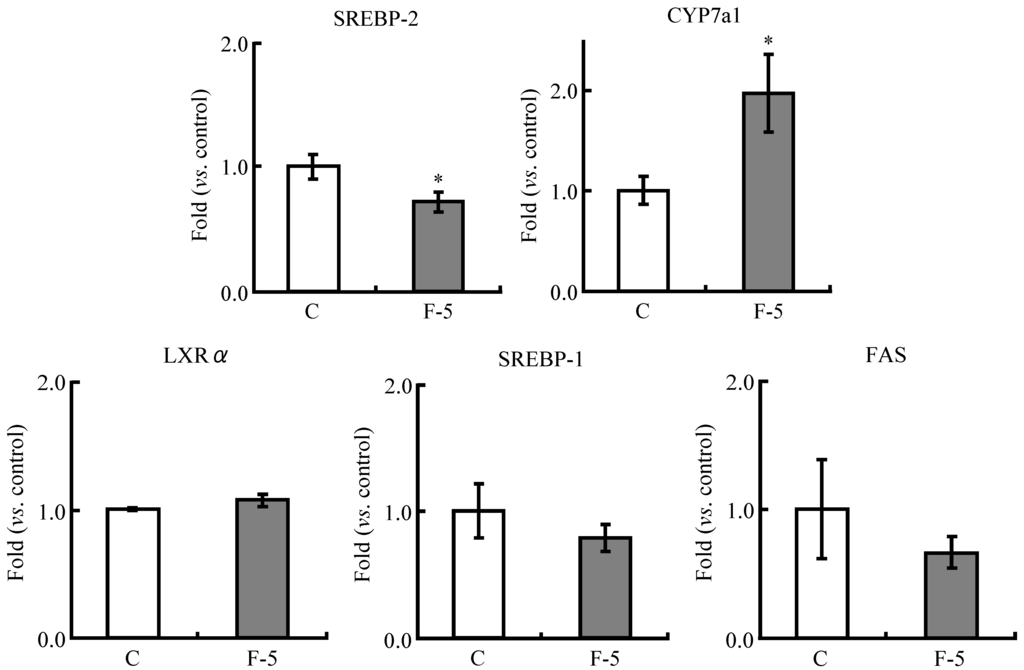 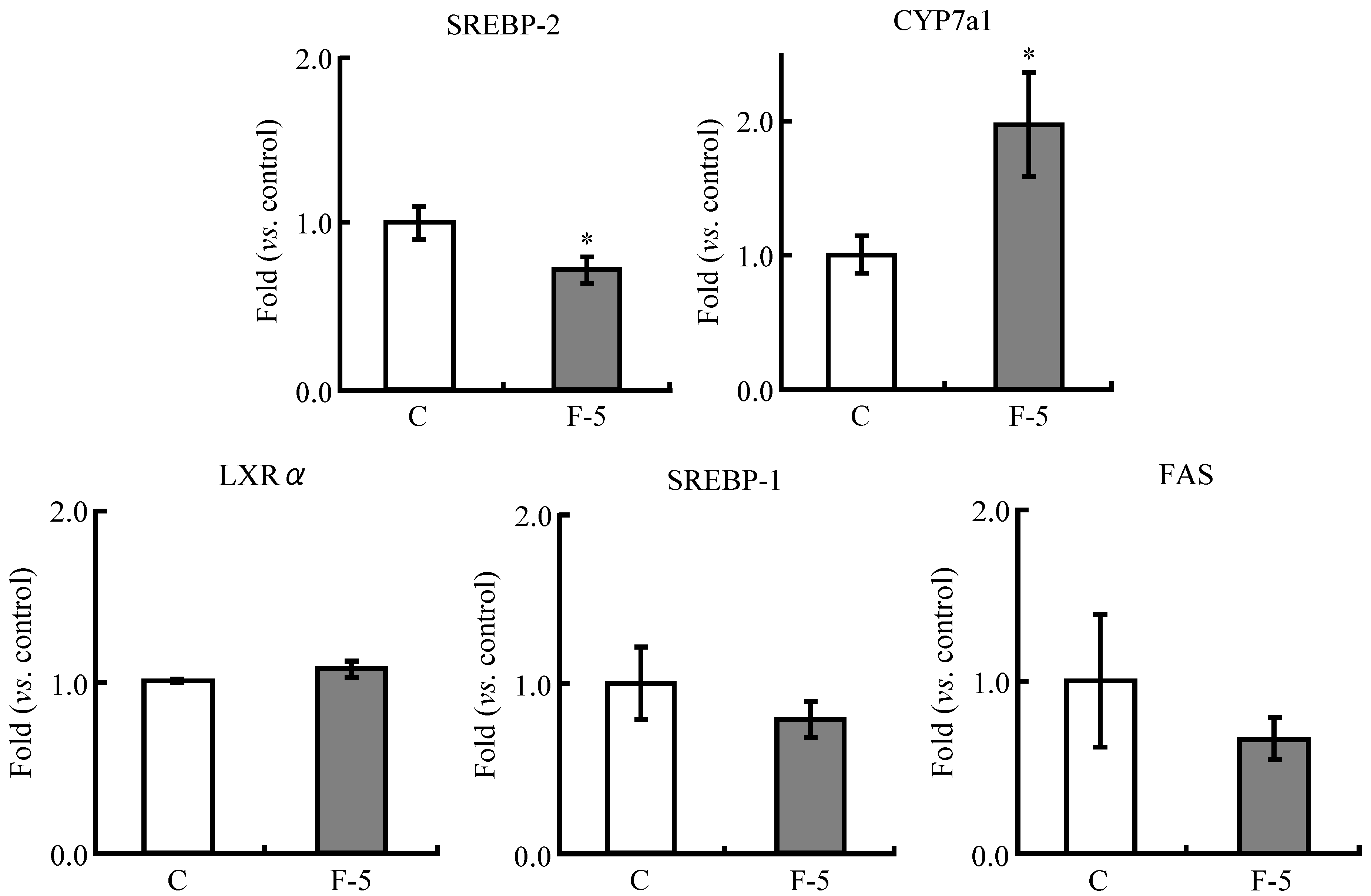 This study shows the potential importance of fermented foods for prevention of metabolic syndrome.

This research was supported by a Grant-in-Aid for Scientific Research from the Japan Society for the Promotion of Sciences.