Prostatic Response to Supranutritional Selenium Supplementation: Comparison of the Target Tissue Potency of Selenomethionine vs. Selenium-Yeast on Markers of Prostatic Homeostasis

Prostate cancer is the product of dysregulated homeostasis within the aging prostate. Supplementation with selenium in the form of selenized yeast (Se-yeast) significantly reduced prostate cancer incidence in the Nutritional Prevention of Cancer Trial. Conversely, the Selenium and Vitamin E Cancer Prevention Trial (SELECT) showed no such cancer-protective advantage using selenomethionine (SeMet). The possibility that SeMet and Se-yeast are not equipotent in promoting homeostasis and cancer risk reduction in the aging prostate has not been adequately investigated; no direct comparison has ever been reported in man or animals. Here, we analyzed data on prostatic responses to SeMet or Se-yeast from a controlled feeding trial of 49 elderly beagle dogs—the only non-human species to frequently develop prostate cancer during aging—randomized to one of five groups: control; low-dose SeMet, low-dose Se-yeast (3 μg/kg); high-dose SeMet, high-dose Se-yeast (6 μg/kg). After seven months of supplementation, we found no significant selenium form-dependent differences in toenail or intraprostatic selenium concentration. Next, we determined whether SeMet or Se-yeast acts with different potency on six markers of prostatic homeostasis that likely contribute to prostate cancer risk reduction—intraprostatic dihydrotestosterone (DHT), testosterone (T), DHT:T, and epithelial cell DNA damage, proliferation, and apoptosis. By analyzing dogs supplemented with SeMet or Se-yeast that achieved equivalent intraprostatic selenium concentration after supplementation, we showed no significant differences in potency of either selenium form on any of the six parameters over three different ranges of target tissue selenium concentration. Our findings, which represent the first direct comparison of SeMet and Se-yeast on a suite of readouts in the aging prostate that reflect flux through multiple gene networks, do not further support the notion that the null results of SELECT are attributable to differences in prostatic consequences achievable through daily supplementation with SeMet, rather than Se-yeast. View Full-Text
Keywords: prostate cancer; cancer prevention; carcinogenesis; SELECT; animal models prostate cancer; cancer prevention; carcinogenesis; SELECT; animal models
►▼ Show Figures 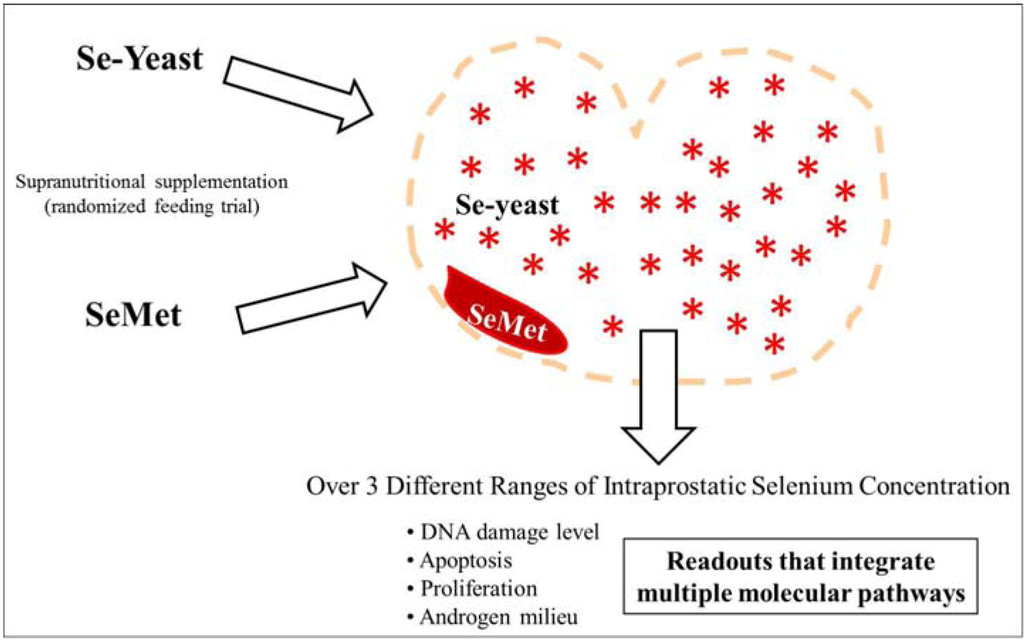