Vitamin A–Not for Your Eyes Only: Requirement for Heart Formation Begins Early in Embryogenesis
Previous Article in Journal

The Relationship between Ultraviolet Radiation Exposure and Vitamin D Status

:
This paper reviews the main factors influencing the synthesis of vitamin D, with particular focus on ultraviolet radiation exposure. On the global level, the main source of vitamin D is the sun. The effect of solar radiation on vitamin D synthesis depends to some extent on the initial vitamin D levels. At moderate to high latitudes, diet becomes an increasingly important source of vitamin D due to decreased solar intensity and cold temperatures, which discourage skin exposure. During the mid-winter season, these factors result in decreased solar radiation exposure, hindering extensively the synthesis of vitamin D in these populations.
Keywords:
vitamin D; ultraviolet; UV; sun

Vitamin D is an important nutrient for maintaining a healthy skeleton as it forms an integral part of the bone metabolism, calcium and phosphor homeostasis [1]. There are indications that vitamin D may have several other health benefits such as prevention or mitigation of cancer [2] and autoimmune diseases [3], reduction in hypertension [4], and prevention of influenza [5]. Anti-carcinogenic effects have been demonstrated in laboratory studies on animals at high doses, but evidence of causality has not been shown in humans, possibly due to too low vitamin D levels in the human population to produce a statistically significant effect [2]. Overall, vitamin D seems to have a positive regulatory effect on the immune system. Recent research indicates that vitamin D stimulates antimicrobial activity [6] and thus may mitigate certain types of infections. There are vitamin D receptors in many organs [7], and long-term vitamin D deficiency may induce a wide range of harmful biological effects. Despite this, only skeletal effects have to date been proven causal in a strict sense [8,9,10]. The existence of an optimal ultraviolet (UV) exposure and its level is a subject of ongoing debate [2,11,12,13,14,15]. Likewise, public recommendations on vitamin D dietary intake and food fortifications are under revision in many countries.
Worldwide studies have shown that vitamin D status is low across wide ranges of populations and age groups even at very moderate latitudes [16,17,18,19,20,21,22,23,24]. Extremely low vitamin D levels have been observed in individuals with darker skin [25,26,27]. It seems clear that casual vitamin D intake from UV exposure and diet are not adequate. Improved public consciousness in combination with revised policies regarding vitamin D can very likely improve public health at quite moderate costs. 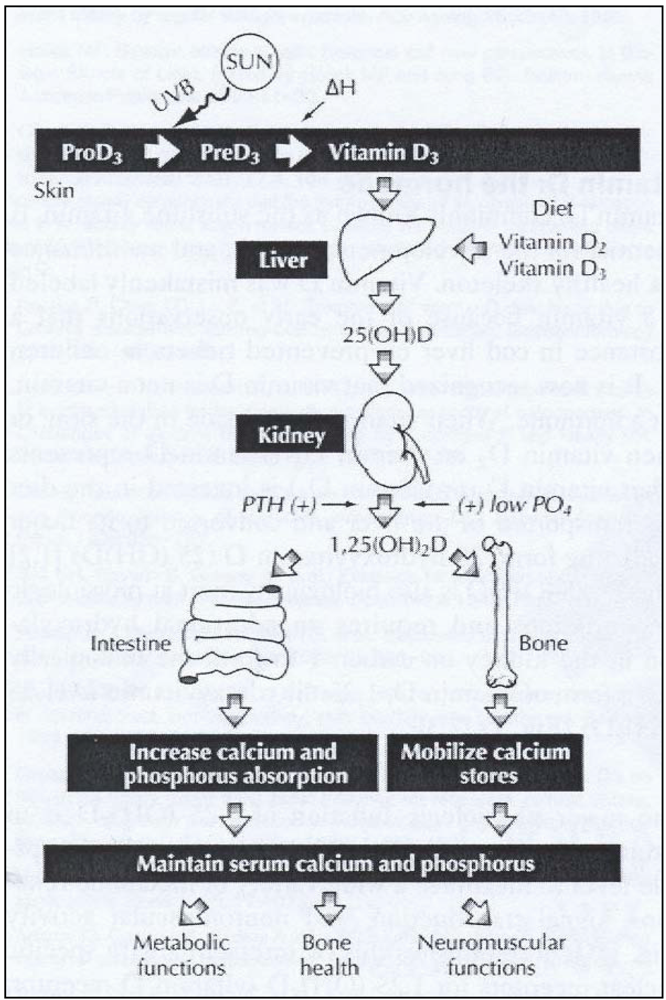 The formation, intake and circulation of vitamin D are well described in the literature, and are outlined in Figure 1. Provitamin D (7-dehydrocholesterol, 7-DHC) is converted to previtamin D in the skin by exposure to UVB radiation. The previtamin D is then isomerized by body heat to form vitamin D3. Vitamin D3 is then transported by the blood to the liver, where it is converted to 25-hydroxyvitamin D (25(OH)D). In the kidneys, the formation of the active form of vitamin D, 1,25-dihydroxyvitamin D (1,25(OH)2D), is tightly regulated by the parathyroid hormone (PTH). 1,25-dihydroxyvitamin D is important for the uptake of calcium and mobilization of calcium stores. As mentioned above, many organs have receptors for vitamin D, and consequently vitamin D is important for many bodily functions. More recently, it was found that 1,25-dihydroxyvitamin D can be produced in tissue and cells, decoupling partly the production of 1,25-dihydroxyvitamin D and its effects from the renal functions and PTH, reviewed in [28]. Although the underlying processes of vitamin D synthesis and circulation is known, the quantitative relationship of UV exposure to humans and the resulting vitamin D production is inadequately described. This review summarizes the status of knowledge with respect to vitamin D synthesis in the human skin, and attempts to clarify the gaps of knowledge as an aid to future research in the area.

The fundamental processes of vitamin D synthesis and circulation in humans is well understood at a qualitative level (Figure 1). In vitro models [29,30,31] and experiments [32,33,34] describing photoconversion of provitamin D to previtamin D exist. Although they are not necessarily representative for the cutaneous and systemic conditions on a large human population level, they are useful qualitative indicators for how much vitamin D is produced under various solar conditions.
The factors affecting vitamin D synthesis from ultraviolet B (UVB) radiation have been discussed previously [35,36]. The effect of some influencing factors can be further explored by running the online facilities described in section 5 for user-specified conditions. The factors are therefore only discussed briefly below:

4. Seasonal and Latitudinal Effects on Vitamin D Synthesis and the Vitamin D Winter

A dramatic effect of seasonal and latitudinal changes of solar UV radiation on vitamin D synthesis was revealed by Webb et al. [80]. This work showed that from November to February, there was insufficient solar UVB to synthesize vitamin D in Boston, MA (USA), but by March, previtamin D was formed from 7-DHC in both solution and the skin. This observation, also known as the “vitamin D winter”, has been reported in other journal studies [81,82]. More moderate estimates of the extent of this “vitamin D winter” have been obtained; however, are based on simulations of UV radiation for clear atmospheric conditions (Figure 4) [83]. The vitamin D effective UV doses depend significantly on latitude and season [84,85]. Vitamin D production is generally seasonally dependent, being low during late winter with exception to some high-latitude coastal communities where diet seems to be the dominant source of vitamin D [86]. There seems to be slightly lower vitamin D levels in women probably due to more body fat [87]. Latitude, location, and time of year may also have health implications in regards to vitamin D, where several studies have associated development of various diseases, influenced by vitamin D deficiency, with geography and season, e.g. [88,89].

User-operated model simulations for vitamin D synthesis and effective doses are available online:
The user can insert their own atmospheric and surface conditions and calculate UV doses and exposure times for arbitrary times and locations. Note that the results from three online model simulations are not entirely consistent. This is due to the laboratory experiments forming the basis for the calculations of the online facilities. Tool 1 is based on comparison to in vitro experiments for low intensities of UV radiation. Tool 2 on the other hand is based on extrapolations from intense erythemal doses of young adults.

6. Conclusions and Suggestions for Additional Research

The combined effects of UV radiation and diet on vitamin D status should be explored more rigorously, both in laboratory environments and at the population level.

In the first paragraph of section 3 I state that "The lamp spectral characteristics are unclear, and assimilation to natural conditions is difficult due to uncertainties in vitamin D action spectrum." Regarding the lab experiments of Holick and coworkers, this has now been clarified in John C. Dowdy, Robert M. Sayre, Michael F. Holick, Holick's rule and vitamin D from sunlight, The Journal of Steroid Biochemistry and Molecular Biology, In Press, doi:10.1016/j.jsbmb.2010.04.002. These results will improve simulation model #2 in section 5.

The author would like to thank Ann Webb, University of Manchester for valuable input to this review paper.

© 2010 by the authors; licensee MDPI, Basel, Switzerland This article is an open-access article distributed under the terms and conditions of the Creative Commons Attribution license (http://creativecommons.org/licenses/by/3.0/).