Do Pregnant Women and Those at Risk of Developing Post-Natal Depression Consume Lower Amounts of Long Chain Omega-3 Polyunsaturated Fatty Acids?
Next Article in Special Issue

1H NMR Fingerprinting of Soybean Extracts, with Emphasis on Identification and Quantification of Isoflavones
Previous Article in Journal

Ricardo B. Ferreira
1,4 and

Berries contain significant amounts of phytochemicals, including polyphenols, which are reported to reduce cancer risk, coronary heart disease and other degenerative diseases. These effects are mainly attributed to the antioxidant capacity of polyphenols found in berries. Strawberry tree (Arbutus unedo) berries are used in folk medicine but seldom eaten as fresh fruits. Their phenolic profile and antioxidant capacity reveal a high potential, but they are not well characterized as a “health promoting food”. The aim of this study was to assess the antioxidant properties of the edible strawberry tree fruit in vitro and in a neurodegeneration cell model. Raspberry (Rubus idaeus), a well documented health-promoting fruit, was used as a control for comparison purposes. A. unedo yielded a similar content in polyphenols and a slightly lower value of total antioxidant capacity in comparison to R. idaeus. Although the chemically-measured antioxidant activity was similar between both fruits, R. idaeus increased neuroblastoma survival in a neurodegeneration cell model by 36.6% whereas A. unedo extracts caused no effect on neuroblastoma viability. These results clearly demonstrate that a promising level of chemically-determined antioxidant activity of a plant extract is not necessarily correlated with biological significance, as assessed by the effect of A. unedo fruit in a neurodegeneration cell model. View Full-Text
Keywords: polyphenols; flavonoids; antioxidants; neuroprotection; strawberry tree polyphenols; flavonoids; antioxidants; neuroprotection; strawberry tree
►▼ Show Figures 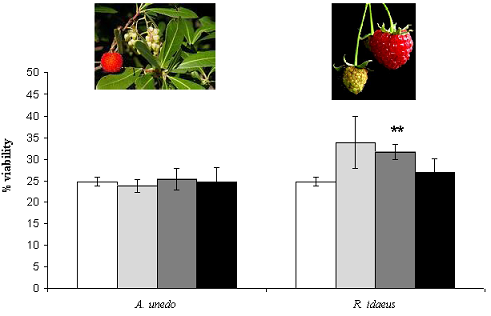