:
We recently demonstrated that the consumption of mixed tree nuts (MTNs) during caloric restriction decreased cardiovascular risk factors and increased satiety. Tryptophan (Trp) metabolism has been indicated as a factor in cardiovascular disease. Here, we investigated the effect of MTNs on Trp metabolism and the link to cardiovascular risk markers. Plasma and stool were collected from 95 overweight individuals who consumed either MTNs (or pretzels) daily as part of a hypocaloric weight loss diet for 12 weeks followed by an isocaloric weight maintenance program for an additional 12 weeks. Plasma and fecal samples were evaluated for Trp metabolites by LC–MS and for gut microbiota by 16S rRNA sequencing. Trp–kynurenine metabolism was reduced only in the MTNs group during weight loss (baseline vs. week 12). Changes in Trp–serotonin (week 24) and Trp–indole (week 12) metabolism from baseline were increased in the MTNs group compared to the pretzel group. Intergroup analysis between MTN and pretzel groups does not identify significant microbial changes as indicated by alpha diversity and beta diversity. Changes in the relative abundance of genus Paludicola during intervention are statistically different between the MTNs and pretzel group with p < 0.001 (q = 0.07). Our findings suggest that consumption of MTNs affects Trp host and microbial metabolism in overweight and obese subjects.
Keywords:
tree nuts; cardiovascular risk; tryptophan metabolism; gut microbiome; weight loss

Tree nuts are an excellent source of protein, unsaturated fatty acids, fiber, minerals, vitamins, and phytochemicals [1]. Tree nut consumption has been associated with many health benefits including decrease in markers of cardiovascular disease, metabolic syndrome, and body weight [2]. Due to their fiber and polyphenol content, tree nuts have been suggested to have prebiotic activity and affect human health partially through modulating gut microbiome composition, such as increasing alpha microbial diversity and reducing pathogenic bacteria [3,4,5,6]. Recent studies showed that the anti-oxidant capacity of phenolic compounds are positively associated with their microbial modulation potential [7]. The alteration in gut microbiota leads to changes in microbial metabolites in the intestine and systemic blood. For example, Holscher et al. demonstrated an effect of walnut nut consumption on microbial bile acid metabolism [8].
Tryptophan (Trp) is an essential amino acid, and tree nuts are a high Trp dietary source. Trp metabolism is involved in many aspects of host metabolism and physiology [9,10]. Trp metabolism in hosts occurs via the kynurenine (KYN) pathway or the serotonin pathway to produce bioactive metabolites. In the intestine, Trp is metabolized by gut microbes into indole and indole derivatives [11]. The majority of Trp is metabolized through the KYN pathway by host cells, which generates many bioactive metabolites that are important for immune regulation [3]. Alterations in the KYN pathway have been previously reported in diabetes and insulin resistance, cardiovascular diseases (CVD), and an increase in the KYN/Trp ratio is often associated with immune activation [12,13,14]. Trp is also metabolized into neuroactive metabolites, such as serotonin, by host cells, and indole derivatives by gut microbiota [15]. About 90% of serotonin in the body is formed in gut cells and released into the blood stream. This process is regulated by gut bacteria [16]. The immunomodulatory role of circulating serotonin is well-established [17]. Microbial indole metabolites of Trp, such as indole-3-propionic acid (IPA), have been associated with decreased risk of cardiovascular disease and type 2 diabetes, and anti-inflammatory and neuroprotection effects [9,18,19,20]. A previous study showed that the consumption of a Mediterranean diet including nuts compared to a fast-food Western diet was associated with an increase in serum Trp metabolites, IPA, and indole-3-lactic acid [21].
In our previous randomized, controlled, two-arm study, we demonstrated that the consumption of 1.5 oz of mixed tree nuts (MTNs) as part of hypocaloric diet (500 kcal per day less than resting metabolic rate) for 12 weeks resulted in weight loss, increased satiety, decreased diastolic blood pressure, and decreased heart rate, but did not change lipid markers [22]. It is possible that changes in the gut microbial composition and microbial metabolites in systemic circulation might link nut consumption to improved cardiovascular markers. Therefore, it is the aim of the present study to utilize fecal and blood samples from this previous study and investigate whether snacks of MTNs as part of a hypocaloric diet modify the gut microbiome, leading to an increase in levels of cardio-protective Trp microbial metabolites.

2.2. Measurement of Plasma and Stool Trp and Its Major Metabolites

DNA extraction and sequencing of the 16S rRNA gene were performed as previously described by UCLA Microbiome Core [24]. Fecal bacterial DNA was extracted using the ZymoBIOMICS DNA Miniprep Kit. The V4 region of the 16S gene was amplified and barcoded using 515f/806r primers, then 250 × 2 bp sequencing was performed on an Illumina MiSeq. Amplicon sequence variants (ASVs) were identified using DADA2 and annotated against the SILVA v138 database. Alpha diversity metrics (Chao1 and Shannon index) were calculated and tested for significance using linear mixed effects models (alpha diversity ~ age + gender + race + intervention + time + intervention * time) with subjects as random effects. All modelling was performed using the lmerTest R package [25]. Beta diversity was calculated using Bray–Curtis dissimilarity and analyzed by repeated measures permutational multivariate analysis of variance (PERMANOVA) using omnibus and Vegan in R, and was visualized via principal coordinate analysis (PCoA) ordination as previously described [26,27]. We performed per-feature testing in multivariate association with linear models MaAsLin2 in R package using linear mixed effects models to examine the potential association between genera with intervention, time and interaction between intervention and time or between genera and Trp metabolites [28]. These models accounted for within-individual correlation from the study’s repeated sampling design. All detected associations were adjusted for subjects as random effect and other fixed effects metadata including age, gender, race (reference level: white), intervention (reference level: pretzel), time (reference level: W0), and intervention and time interaction. The current analysis was performed after filtering at minimum abundance level of 0.0001 and minimum prevalence of 0.2. The relative abundance of genera was log transformed. Only significant associations with q ≤ 0.25 after a false discovery rate (FDR) correction were included.

To detect difference in changes in Trp metabolites between groups (NUTS vs. PRETZEL) over time, we built linear mixed models that included fixed effects of intervention, time, intervention–time, age, sex, race, and subject as random effects. Between-group comparison had intervention, time, and intervention–time interactions to estimate the intervention effects at different time points. Within-group comparison had the time variable to estimate the change over time. Values of p < 0.05 were considered statistically significant. All statistical analysis was performed using the lmerTest R package [25].

3.1. The Association between Trp Metabolites and Cardiovascular Risk Factors

3.3. Effects of MTNs and Pretzel Consumption on Fecal Microbiome

The clinical protocol was approved by the Internal Review Board of the University of California, Los Angeles. All subjects provided written informed consent before the study began. The study was registered in ClinicalTrials.gov under the following identifier: NCT03159689.

Data is contained within the article and Supplementary Material. 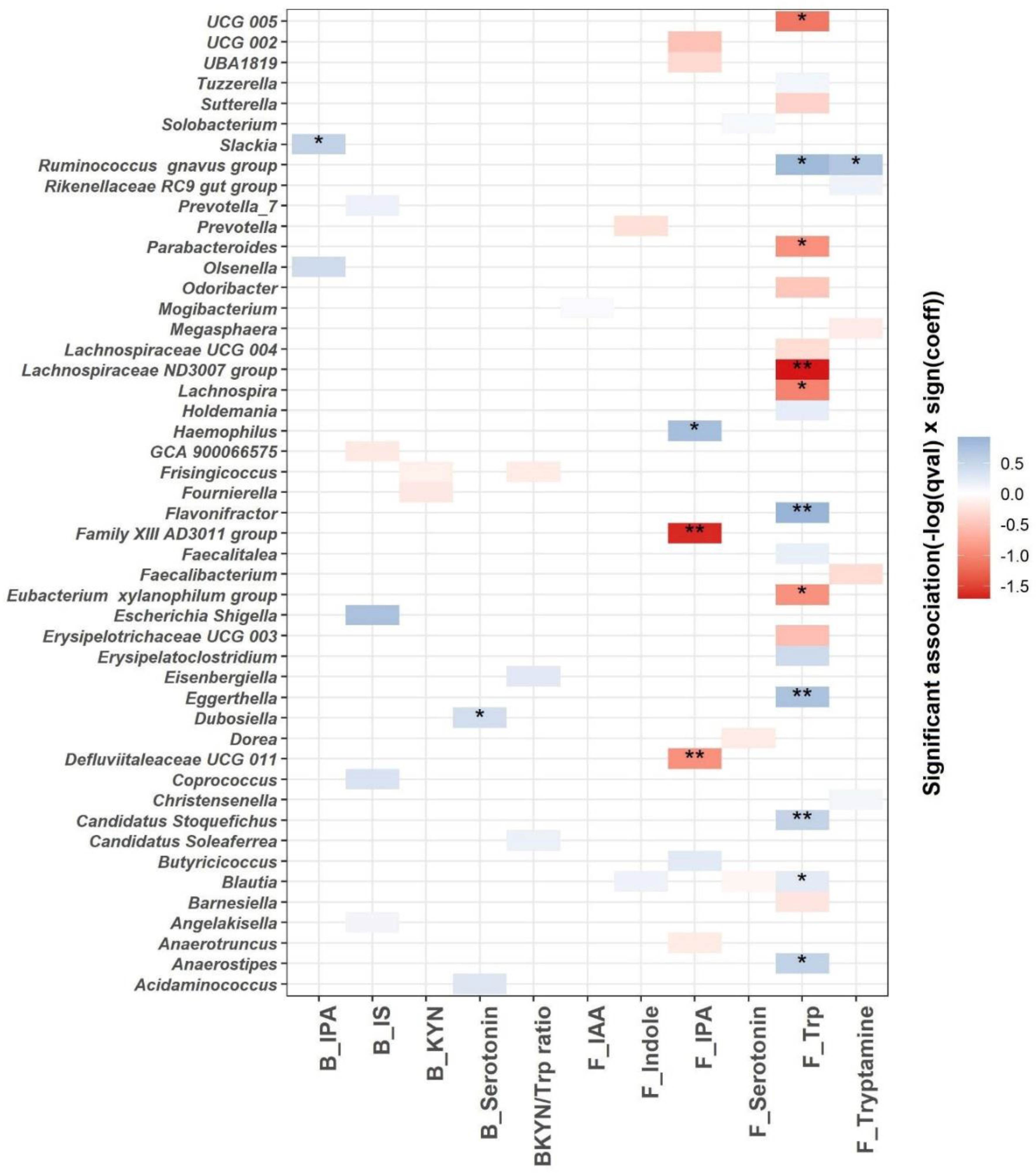