Intermittent Fasting versus Continuous Calorie Restriction: Which Is Better for Weight Loss?

We conducted a systematic review and meta-analysis of randomized clinical trials and pilot trial studies to compare the effectiveness of intermittent fasting (IF) and continuous calorie restriction (CCR) in overweight and obese people. The parameters included body mass index (BMI), body weight, and other metabolism-related indicators. A systematic search in PubMed, Embase, Cochrane Library, and Web of Science was conducted up to January 2022. Standardized mean differences (SMDs) with 95% confidence intervals (CIs) were used to measure the effectiveness. Publication bias was assessed using Egger’s test. The stability of the results was evaluated using sensitivity analyses. The significance of body weight change (SMD = −0.21, 95% CI (−0.40, −0.02) p = 0.028) was more significant after IF than CCR. There was no significant difference in BMI (SMD = 0.02, 95% CI (−0.16, 0.20) p = 0.848) between IF and CCR. These findings suggest that IF may be superior to CCR for weight loss in some respects.
Keywords: intermittent fasting; calorie restriction; energy control; BMI; body weight; meta-analysis intermittent fasting; calorie restriction; energy control; BMI; body weight; meta-analysis

Compared to 173 million obese people in 2014, 257 million adults worldwide (6% of men and 9% of women) are predicted to be living with severe obesity, showing a rapid increase in the number of obese people [1]. Obesity is now replacing malnutrition and infectious diseases as the most critical cause of suboptimal health. Obesity has been linked to diabetes, coronary heart disease, cancer, metabolic syndrome, and sleep-disordered breathing [2]. In addition, obesity can also cause the elevation of oxidative stress, inflammatory state, and hypoxia, which leads to the dysfunction of perivascular adipose tissue (PVAT) [3,4].
Metabolic syndrome is also a growing concern characterized by pathological metabolism of protein, fat, carbohydrates, and other substances; it is a risk factor for diabetes, cardiovascular, and cerebrovascular diseases [5]. The amount and quality of many types of cells found in adipose tissue, including adipose stem cells (ASC), is altered as a result of obesity. These changes in the function and nature of ASC impair adipose tissue remodeling and adipose tissue function, leading to metabolic disorders [6]. The common causes of these diseases are insulin resistance and hyperinsulinemia secondary to obesity, especially central obesity [7].
Most obese people rarely choose to exercise because of work stress or psychological reasons; they are more enthusiastic about dietary intervention. Dietary adjustment is the heart of obesity treatment. Weight loss diets include various permutations of energy restriction, macronutrients, and food and dietary intake patterns [8]. In recent years, various dietary adjustment methods have become increasingly popular. Current guidelines recommend continuous calorie restriction (CCR; about 500 or 750 kcal of energy deficiency per day, or 30% of baseline energy requirements limits) and comprehensive lifestyle interventions as the cornerstone of obesity treatments [9]. On average, this method produces moderate weight loss (5–10% ≥ 1 year) [9].
Because traditional CCR methods are relatively ineffective in achieving and sustaining weight loss, there has been growing interest in identifying alternative dietary weight-loss strategies that limit the energy intake to specific periods of the day or extend the gap between meals (i.e., intermittent calorie restriction, ICR) [10]. Intermittent fasting (IF) comes in many forms and includes regular breaks. A common form of IF includes fasting once or twice a week for up to 24 h, followed by discretionary food intake for the remainder of the day, known variously as periodic long-term fasting, ICR, intermittent energy restriction (IER) [11], time-restricted eating (TRE, i.e., eating only for 8 h and then fasting for another 16 h a day), and alternate-day fasting (ADF) [12]. However, it is not yet certain whether TRE has the same health effects as other forms of IF [10,13]; therefore, we omitted TRE in this study.
Continuous fasting has become widespread in daily life, and intermittent fasting has become increasingly popular. Intermittent fasting is a dietary pattern alternating between normal energy and energy restriction (or complete fasting) and has attracted substantial attention from scholars [14]. IF reduces body mass and improves glucose and lipid metabolism. Its benefits include reducing the risk of diabetes, cardiovascular disease, and stroke, inhibiting tumor growth, and preventing Alzheimer’s disease and Parkinson’s disease [15].
A study discovered that IF might be comparable to, but not superior to, CCR for weight loss and metabolic illness prevention [10]. However, another study suggested that IF is a more effective strategy in managing the body weight, fat mass, and waist circumference of individuals with metabolic syndrome [16]. These authors found that, compared with CCR, IF decreased the levels of high-sensitivity C-reactive protein and prothrombin and thromboplastin times. A review suggested that IF might be superior to CCR because it helps conserve lean body mass at the expense of fat mass [17]. A growing body of evidence suggests that IF has more benefits and can be more effective than CCR. Nevertheless, IF versus CCR on weight loss in overweight and obese people remains controversial.
At present, there are a variety of obesity evaluation indicators in the home and abroad; the most commonly used are: body mass index (BMI in kg/m2), body fat rate (body fat percentage, BF%), waist circumference (WC), body weight (BW), etc. Among them, BMI is widely used to evaluate generalized obesity. The BF% is widely applied to evaluate the proportion of body fat, WC is widely used to evaluate valence abdominal obesity, and BW is mainly used to evaluate abdominal obesity and health risk. Therefore, our research mainly looked at the BMI, BW, WC, etc.
Because of the growing concern regarding obesity and the diseases it causes, a literature review was carried out to compare these weight-loss strategies. Therefore, our study aimed to compare IF and CCR regarding effectiveness for weight loss in people with obesity or metabolic syndrome.

Our meta-analysis was based on the Preferred Reporting Items for Systematic Reviews and Meta-analyses guidelines [18].

Two independent reviewers reviewed all the studies and extracted the data in a standardized format. The articles in the database were retrieved based on the data measured at the end of each study, and we extracted the most complete and recent data based on the articles from the same population. The information collected was as follows: first author, publication year, country, study design, participants, study duration, age, BMI, body weight, fat mass, waist, fasting blood glucose, and interventions. The data were converted to unified units as needed. We did not include interventions such as exercise and drugs to avoid affecting the effectiveness of our evaluation.
We compared IF with CCR, without restriction on the treatment history. The outcomes were as follows: change in BMI between baseline and the end of intervention, and change in body weight between baseline and the end of the intervention.
For randomized clinical trials, we used the Cochrane methodology to assess the quality [19] (Supplementary Figures S1 and S2).

The comparison between IF and CCR was analyzed using the random-effects model, which used mean values and standard deviations. Continuous variables were analyzed using standard mean difference (SMD) and 95% confidence intervals (CIs). We utilized Cochran’s (chi-square) test to measure heterogeneity and the I2 statistic to determine the extent of consistency: an I2 of over 75% indicates a high level of inconsistency, I2 of above 50% is moderate, and I2 of below 25% is low [20]. To estimate pooled effect sizes, random effects models were used. A two-sided p-value of less than 0.05 was considered statistically significant. Publication bias was assessed using Begg’s test [21] and Egger’s test [22].
We conducted influence analysis to determine the impact of a single study on the overall results. Subgroup analysis was performed according to the intermittent fasting regimen, age, and area. All statistical analyses were carried out using RevMan (Version 5.3) and Stata Software (Version 12.0).

The details of the search are shown in Figure 1. A total of 10,138 potential reports were identified from PubMed, Embase, Cochrane Library, and Web of Science. Based on the year of publication and the type of study, we included 1971 articles. After re-examination, 304 duplicated studies were deleted. After reviewing the titles and abstracts, 1615 nonconforming studies were excluded. After reviewing the full texts, 41 studies that did not meet the requirements were excluded. Finally, eleven studies met the selection criteria [23,24,25,26,27,28,29,30,31,32,33].

We included 11 articles with 705 patients. The studies’ characteristics are displayed in Table 1 and Table 2. The 11 studies were primarily randomized controlled trials. The BMIs of all participants were more than 25 kg/m2, and some of the patients were diagnosed with type 2 diabetes mellitus or metabolic syndrome. Eight studies compared IF with CCR [23,25,26,27,28,29,31,33], two compared ADF with CCR [30,32], one compared CCR with twice-weekly fasting (i.e., on any two non-consecutive days of the week, girls only ate 500 kcal per day and boys only ate 600 kcal per day. On the other five days, the subjects ate normally, but did not overeat or diet) [24]. ICR, ADF, and twice-weekly fasting are all forms of IF. All studies included data on BMI and weight. All dietary intervention methods met the standard criteria, and data measurements were ensured to minimize errors. The studies included regular follow-up to ensure accuracy. All subjects were above 30 years old.

3.3.3. TC, TG and Waist Circumference after IF versus CCR

We conducted a subgroup analysis because of the moderate heterogeneity of BMI change in the overall analysis. We found that the different IF forms accounted for the heterogeneity between IF and CCR. Therefore, all studies were divided into modified ADF and normal IF. Two studies with modified ADF showed significant differences between IF and CCR (SMD = −0.56, 95% CI: −0.90 to −0.23, I2 = 0%, p = 0.709), while the remaining studies with normal IF showed no significance (SMD = 0.14, 95% CI: −0.01 to 0.28, I2 = 0.0%, p = 0.059) (Figure 9). Because both sets of heterogeneity were zero, we deduced that the form of IF was the source of heterogeneity.
We carried out other subgroup analyses classified by age (≥60 y, <60 y), area (Oceania, Europe, Western Asia, North America), and physical condition (obesity or overweight, obesity or overweight with disease) (Table 3). These factors showed no significant differences or reductions in heterogeneity. More information is needed for further analysis. 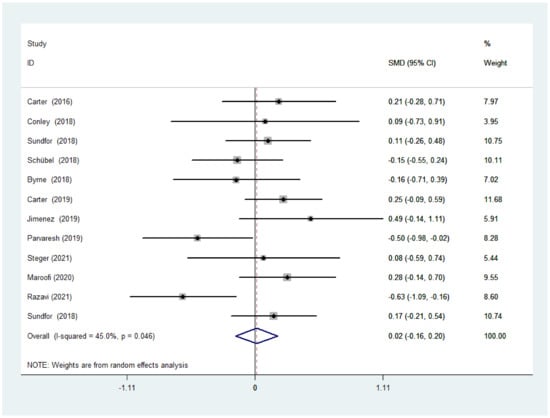 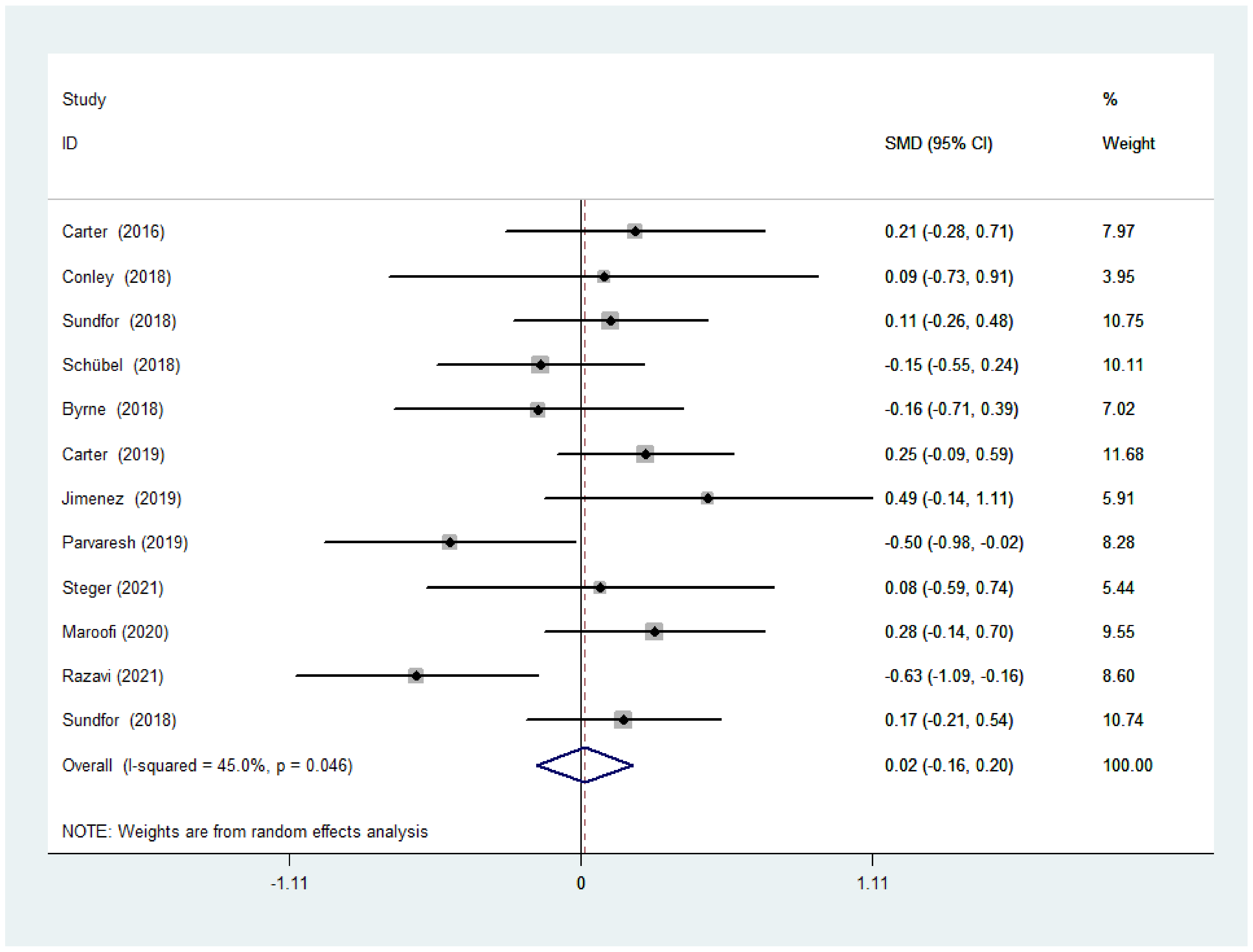 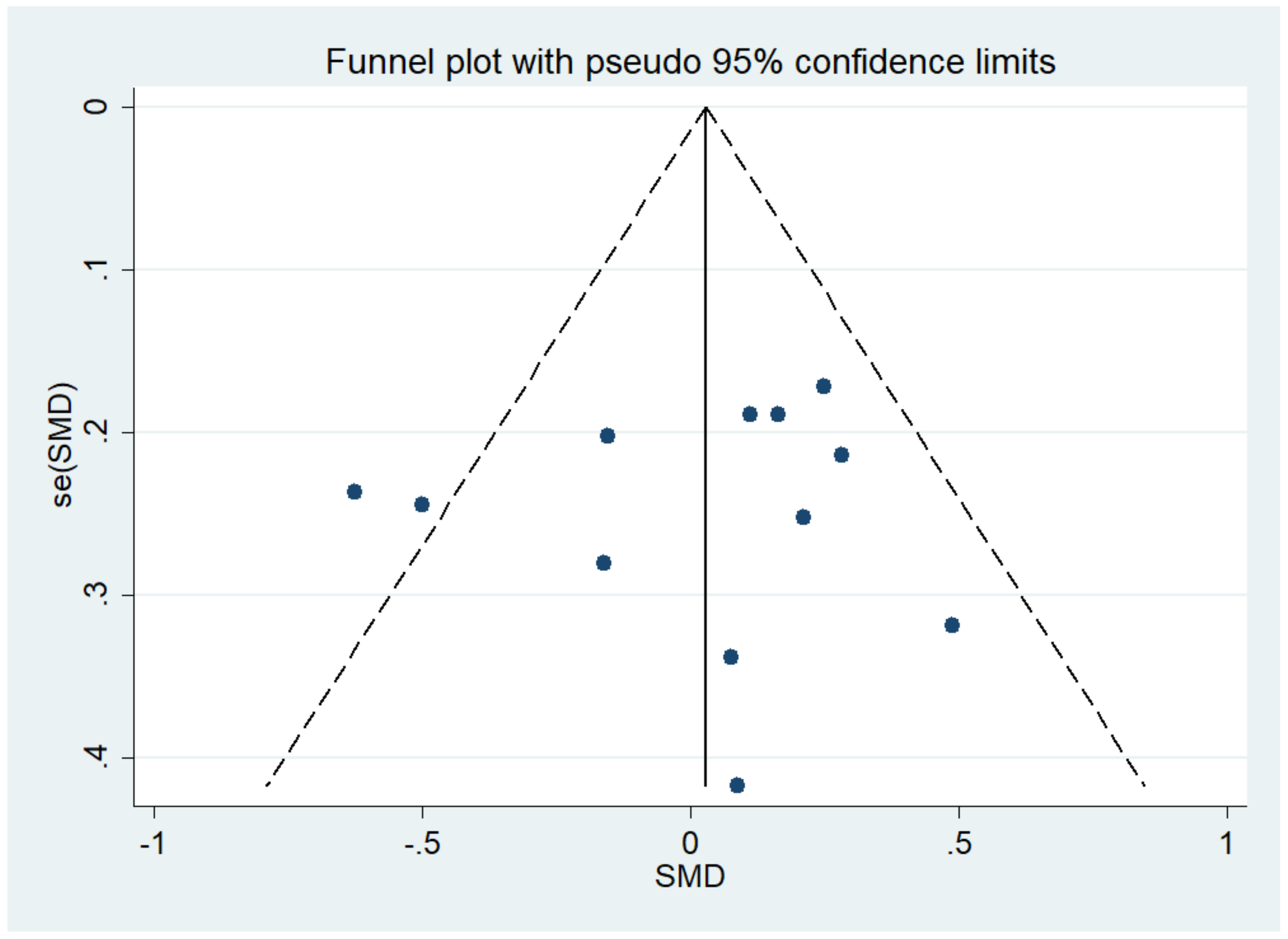 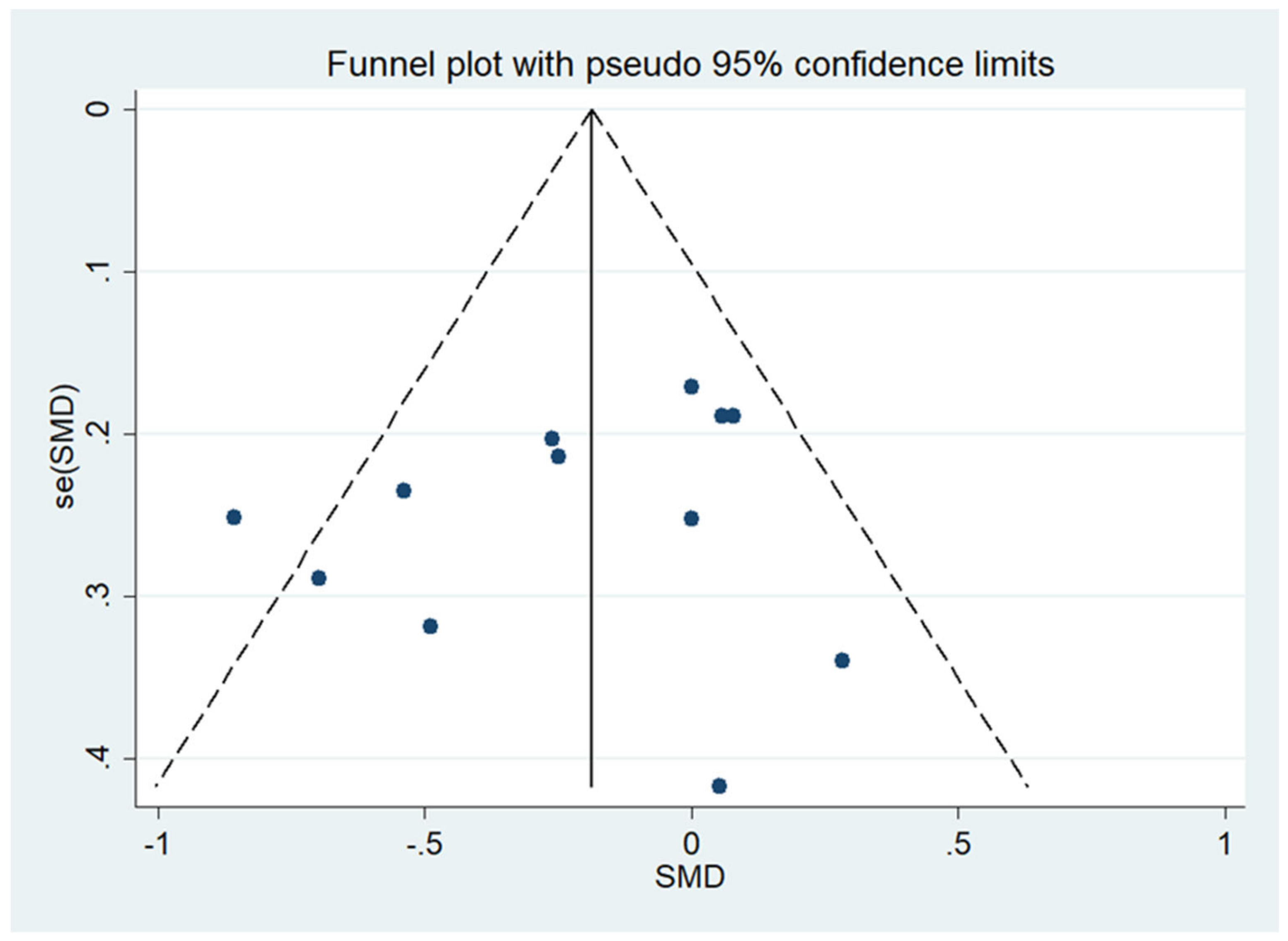 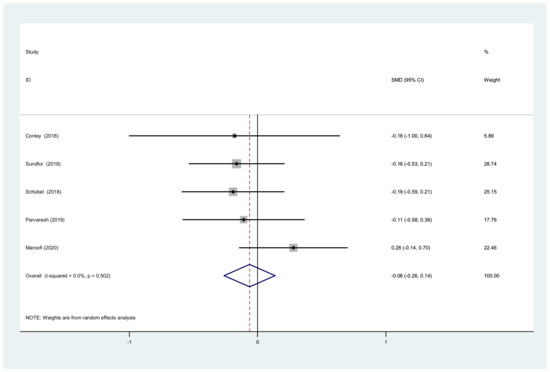 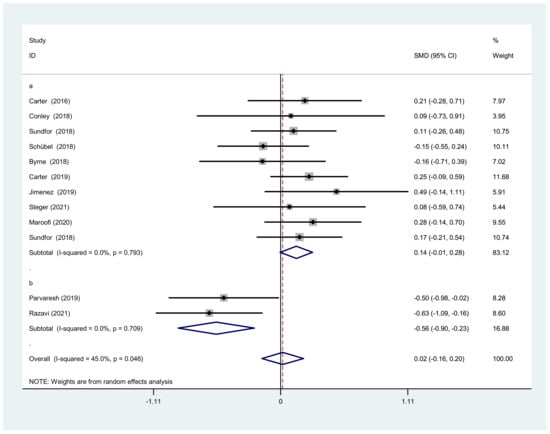 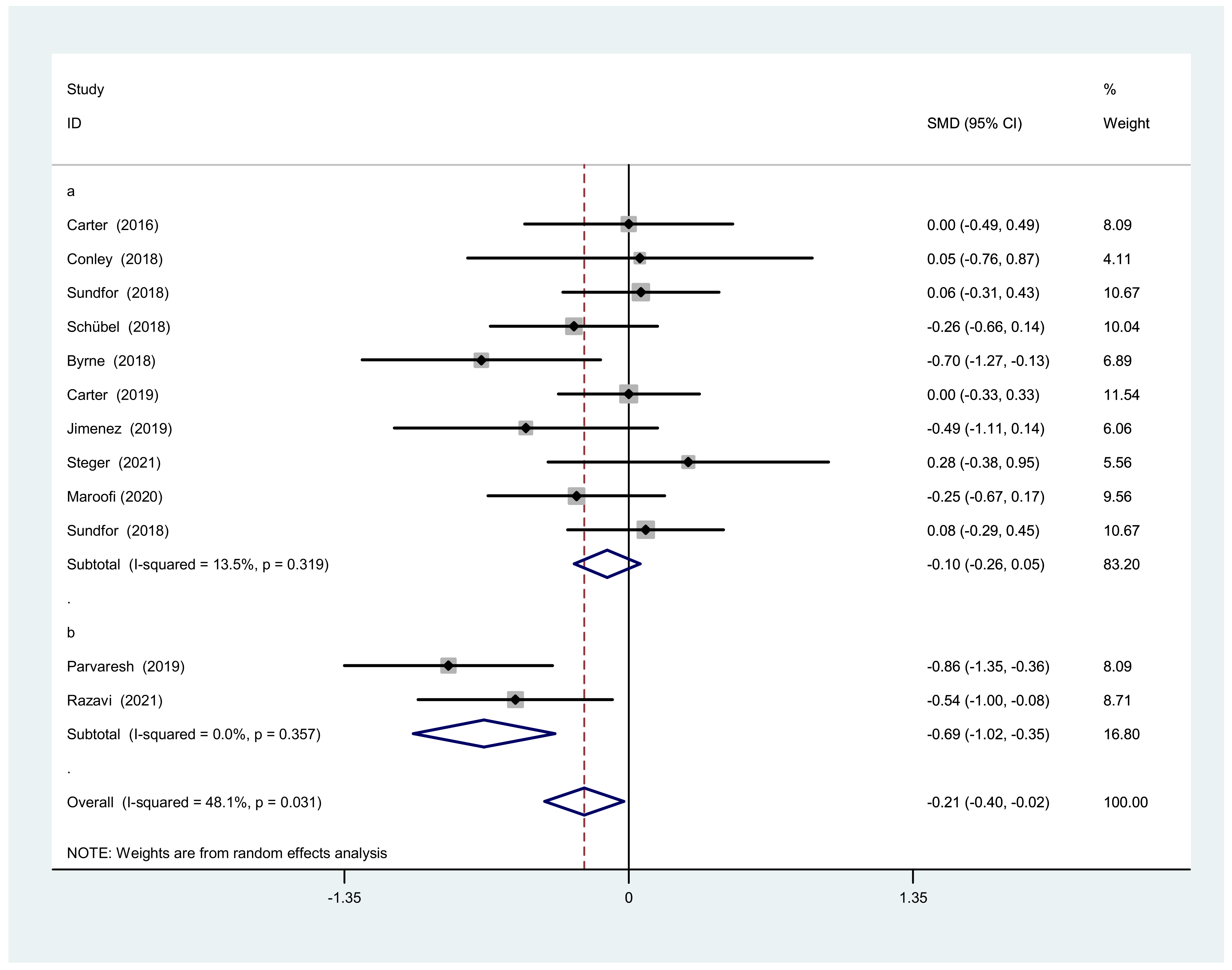 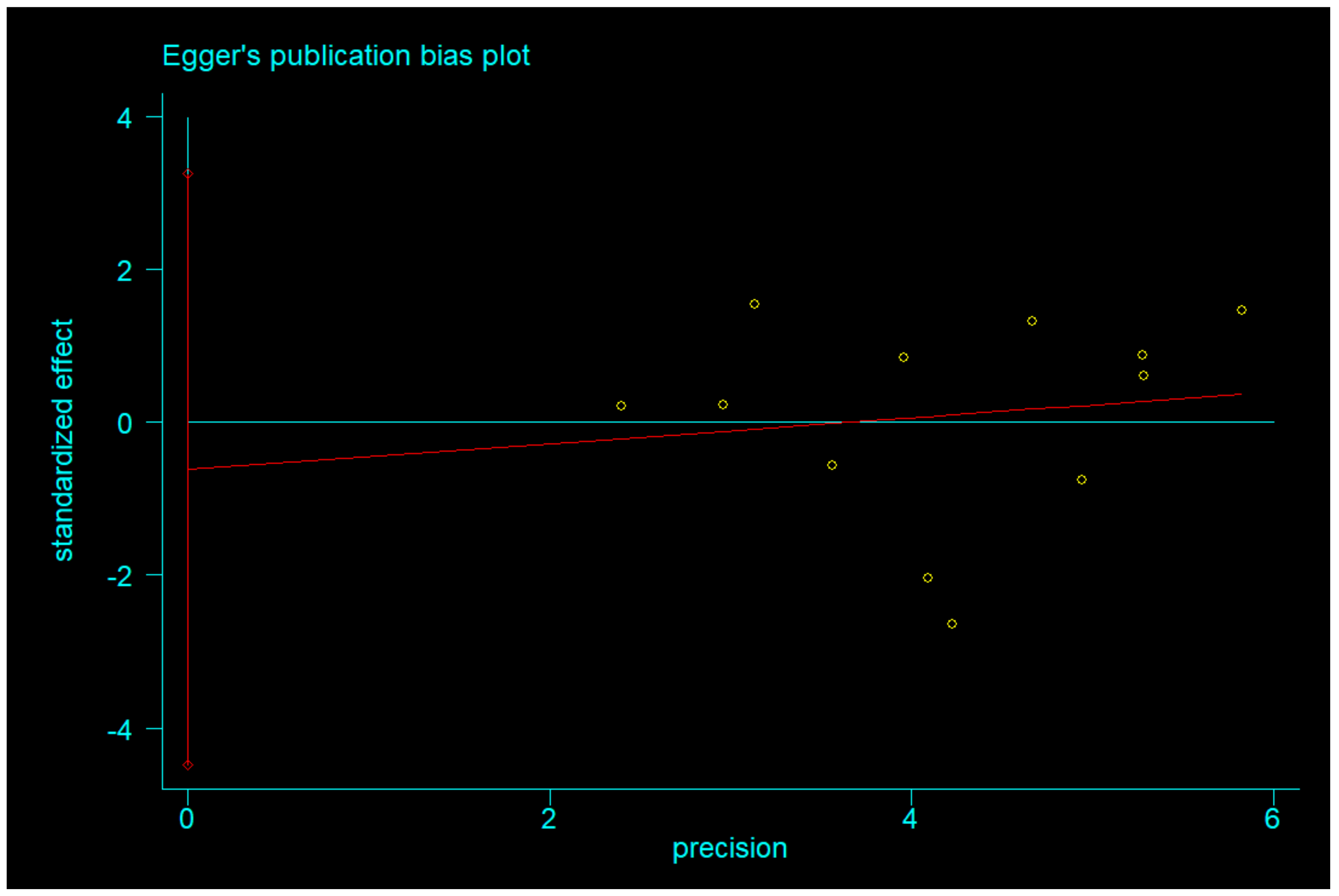 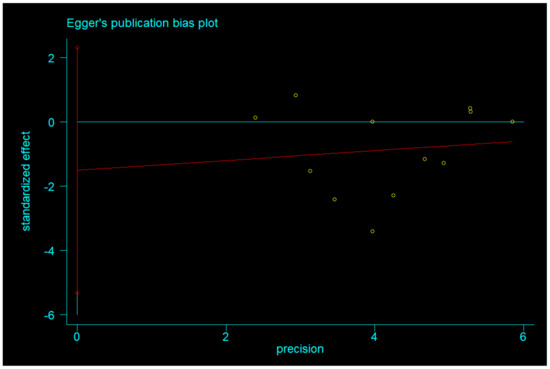 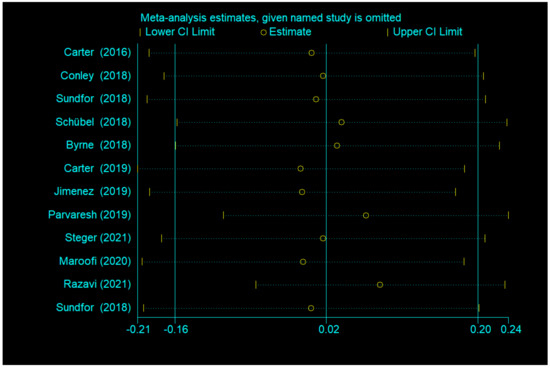 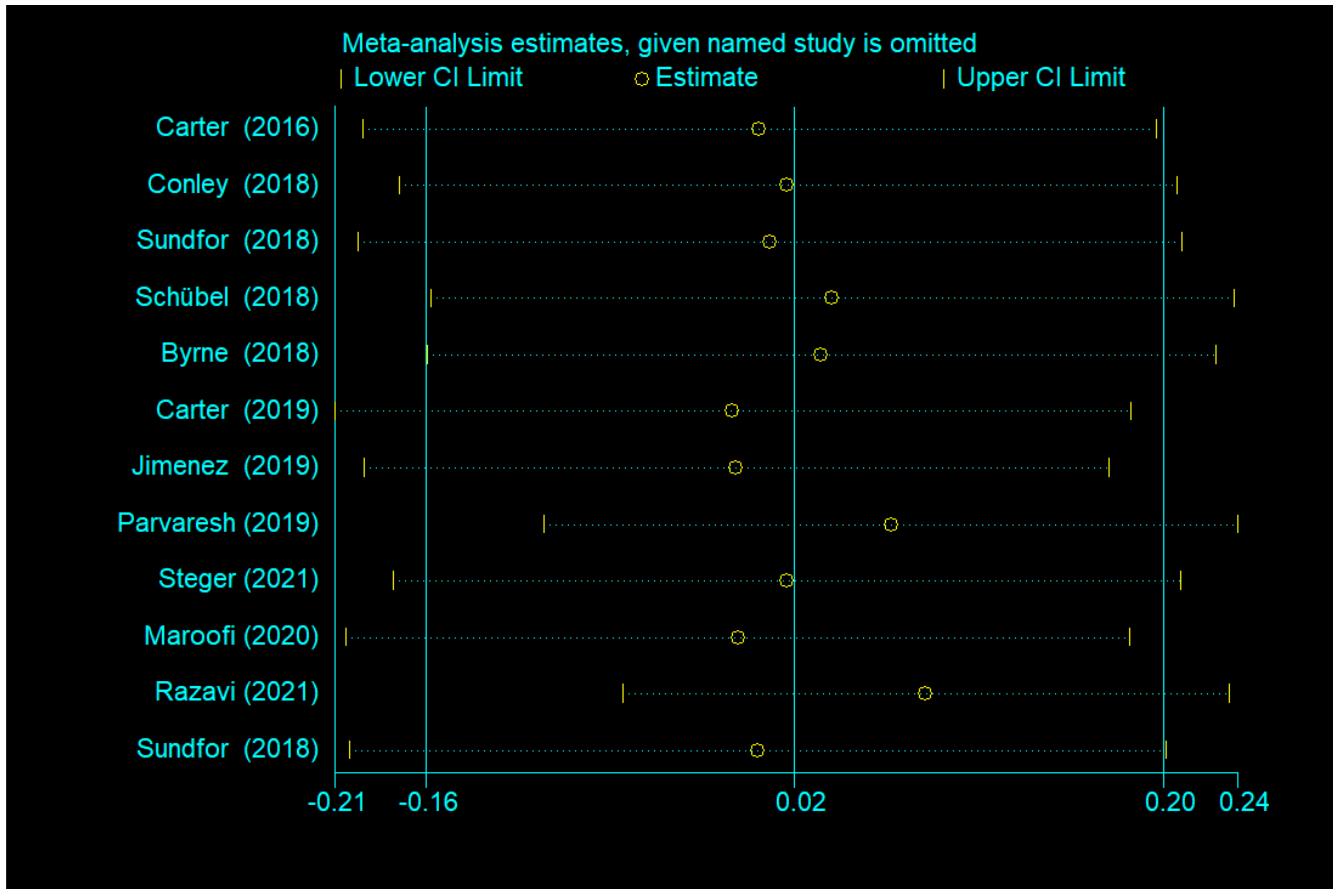 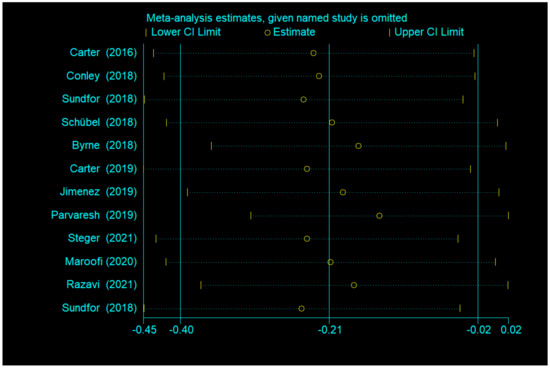 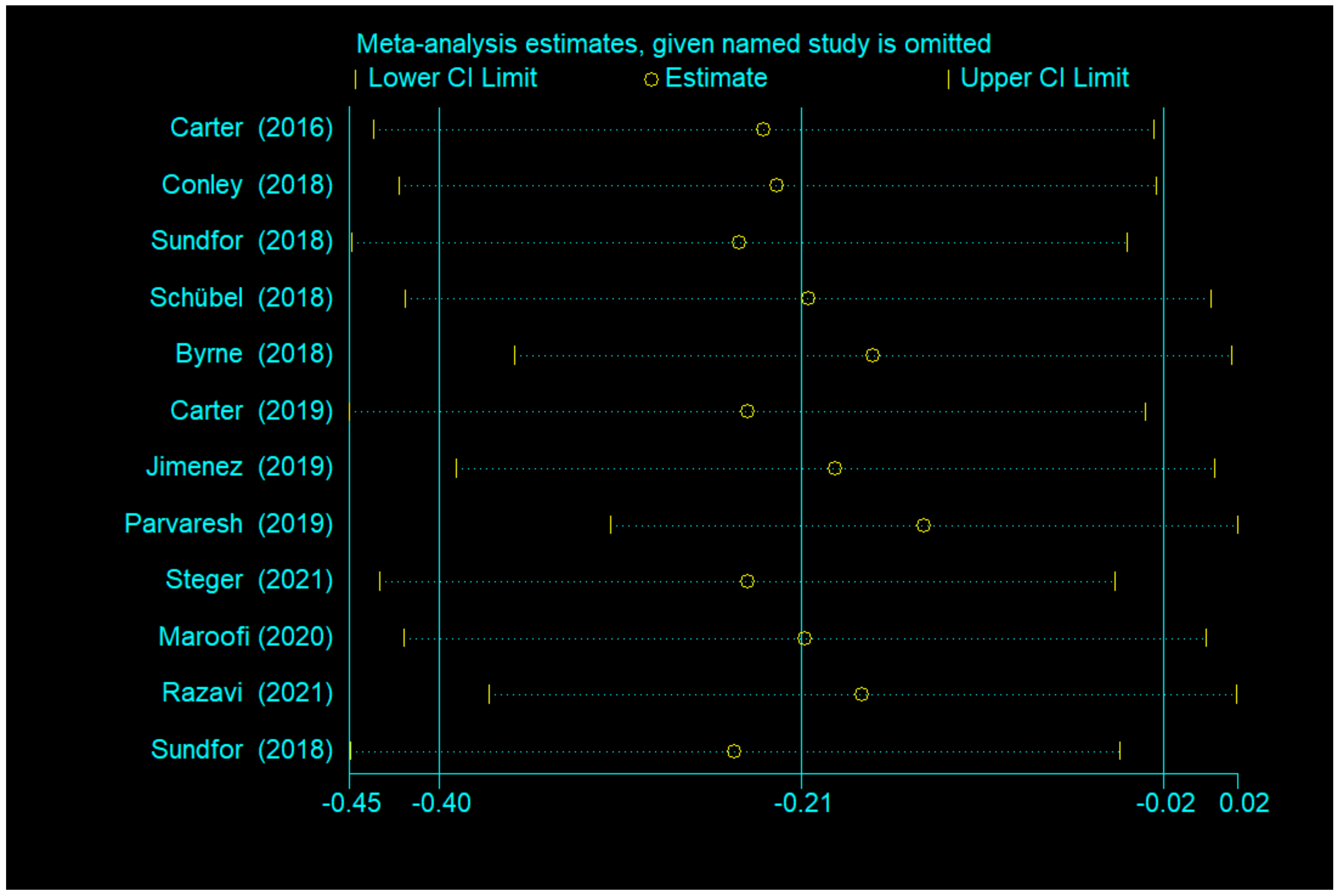