:
The effects of different cholecalciferol supplementation regimens on serum inflammatory cytokines in healthy subjects with vitamin D deficiency are still lacking. This is a single-center, open-label, randomized, parallel group study involving healthy subjects deficient in vitamin D (baseline 25OHD < 20 ng/mL) receiving oral cholecalciferol with three different dosing regimens: Group A: 10,000 IU/day for 8 weeks followed by 1000 IU/day for 4 weeks; Group B: 50,000 IU/week for 12 weeks and Group C: 100,000 IU every other week for 12 weeks. IL-17A, IL-6, IL-8, IL-10, IL-23 and TNFα were measured at baseline and at week 4, 8, 12, and 16. 75 healthy subjects were enrolled (58.7% female), with an average age of 34.1 ± 10.2 years. No statistical differences were observed among groups at baseline for either IL-6, IL-17A, IL-23, IL-8 or IL-10 at any time point; TNFα was indetectable. Concerning the whole sample, the time trend analysis showed a statistically significant linear trend for decreasing values over the treatment period for IL-6 (p = 0.016) and IL-17A (p = 0.006), while no significant time trends were observed for the other teste cytokines. No significant differences were found in the serum concentrations of the tested cytokines between week 12 and week 16. In young healthy individuals deficient in vitamin D, cholecalciferol administration showed a decrease in the serum IL-6 and IL-17A concentrations, without marked differences using the three regimens.
Keywords:
vitamin D; cholecalciferol; osteoporosis; cytokines; supplementation; immune response; autoimmune diseases

Vitamin D is a key factor in the calcium-phosphorous and bone homeostasis [1]. However, it is now becoming clear that the vitamin D metabolome may be involved in several physiological functions, with a pleotropic effect in the human tissues [2]. In particular, the immunomodulatory functions of vitamin D are of growing scientific interest, with increasing clinical and epidemiological data supporting the link between the vitamin D status and the incidence and severity of conditions such as multiple sclerosis, psoriasis, diabetes, rheumatoid arthritis, inflammatory bowel diseases and infectious diseases [3,4,5,6]. In vitro models suggest that vitamin D contributes to shifting the immune status from a proinflammatory state to a tolerogenic one, suppressing the proliferation of T lymphocytes, promoting differentiation of regulatory T cells and modulating cytokine production [7]. Specifically, vitamin D may decrease the expression of interleukin (IL)-2, IL-6, tumor necrosis factor (TNF)-α, IL-17 and IL-21 and induce the expression of IL-4, IL-5, IL-9 and IL-13 cytokines, resulting in a shift from T helper lymphocytes (Th)-1 and Th-17 to Th-2 immune profile [3]. When considering in vivo models and data from clinical studies, the changes in the serum concentrations of inflammatory cytokines after vitamin D supplementation have been studied in different pathological conditions [8,9,10,11], however with inconsistent results. Moreover, data on vitamin D-deficient healthy subjects are currently lacking. Recently, we published data comparing the pharmacokinetic (PK) and pharmacodynamic (PD) profiles of three different cholecalciferol supplementation schedules (daily administration vs. weekly and biweekly boluses, study DIBA/11) [12,13].
In the present study, we report the data on the exploratory outcomes of the study, namely the effects of the three different cholecalciferol supplementation regimens on serum inflammatory cytokines (IL-6, IL-17A, IL-23, IL-8, IL-10 and TNF-α).

This is a single-center, open-label, randomized, parallel group study in male and female healthy subjects that aimed to compare the PK and PD profiles of cholecalciferol (DIBASE®, Abiogen Pharma, Italy) administered as repeated once daily (10,000 IU/day for 8 weeks followed by 1000 IU daily for 4 weeks; group A), weekly (50,000 IU/week for 12 weeks; group B) and alternate week doses (100,000 IU every other week for 12 weeks; group C). The regimens adopted in this trial correspond to the highest dosages allowed for cholecalciferol (DIBASE®) in Italy, according to its Summary of Product Characteristics (SmPC), for the correction of vitamin D deficiency in adults [14].
The date of the first enrolment visit was 17 October 2017, and the date of the last enrolment visit was 14 February 2018. The date of the last completed visit was 5 June 2018.
This study was approved by the institutional research committee (protocol identification: DIBA/11, EudraCT Number: 2017-000194) and was conducted in accordance with the 1964 Helsinki declaration and its later amendments or comparable ethical standards. Written informed consent was obtained from all individual participants included in the study. The primary objective of this study was to compare the pharmacokinetic profiles of cholecalciferol (DIBASE®) and calcium, phosphate and albumin changes when administered as repeated once daily, weekly and alternate week doses in healthy male and female volunteers. The secondary objectives of the study were to assess the PD profiles investigated the changes in vitamin D metabolites, bone turnover markers, parathyroid hormone, fibroblast growth factor-23, and Wnt pathway inhibitors. The full study protocol and the results related to the primary and secondary outcomes have been already reported elsewhere [12,13].
Inclusion criteria were: caucasian females and males, aged between 18 and 60 years old; BMI between 18.5 kg/m2 and 28 kg/m2; screening 25OHD < 20 ng/mL; negative urine pregnancy test. The main exclusion criteria were: use of any medicinal product (including antibacterial drugs, over-the-counter medication, vitamins and natural products) in the previous 14 days; history of clinically significant gastrointestinal, renal (including renal stone formation), hepatic, pulmonary, endocrine, oncologic, or cardiovascular disease; or history of epilepsy, asthma, diabetes mellitus, psychosis or severe head injury; vitamin D therapy or food supplements applied within two months; metabolic disorders of calcium or bones (including secondary hyperparathyroidism), history of angina pectoris, artificial UVB exposition (solarium) during the previous 14 days.
Subjects were instructed by the Investigator not to change their lifestyle or diet, including exercise, smoking habits, and fiber intake, during the study and to not have sunbaths or use sunlamps.

Analysis of variance (ANOVA) with post hoc analysis (Bonferroni) was used to estimate the absolute differences among groups at baseline.
To test the hypothesis of equal means of cytokines concentrations over the different observation points, one-way ANOVA for repeated measures was adopted, including the treatment period (baseline, week 4, 8 and 12) and the subsequent follow-up to week 16. Sphericity was tested through Mauchly’s test, in the case of violation of the assumption of sphericity, the Huynh-Feldt adjustment was adopted; subsequent pairwise comparisons at different time points were assessed with Bonferroni method for multiple comparisons. Trend analysis was also performed to test for the presence of a linear or quadratic pattern. A two-way ANOVA for repeated measures was used to investigate the interaction of the different supplementation regimens (group A, B and C) over time.
Two-sided p values of 0.05 or lower were considered significant. Data are presented as mean ± SD. The sample size of 25 subjects per arm (total N = 75) was set for the primary endpoint of the study (25OHD exposure) and based on clinical judgement and practical considerations and not on formal statistical reasoning.

In conclusion, in our cohort of young, healthy vitamin D deficient subjects, we observed a decrease in the serum concentrations of IL-6 and IL-17A, without marked differences among the three different regimens of supplementation.

The study was financially supported by an unrestricted grant from Abiogen Pharma, Pisa, Italy. The funder had no role in the design, performance, analysis, interpretation or reporting of the study.

This study was approved by the institutional research committee (protocol identification: DIBA/11, EudraCT Number: 2017-000194-36, approval date 20 March 2017, document AIFA/SC/28399) and was conducted in accordance with the 1964 Helsinki declaration and its later amendments or comparable ethical standards.

Written informed consent was obtain from all individual participants included in the study.

Data can be made available from the corresponding author upon request. 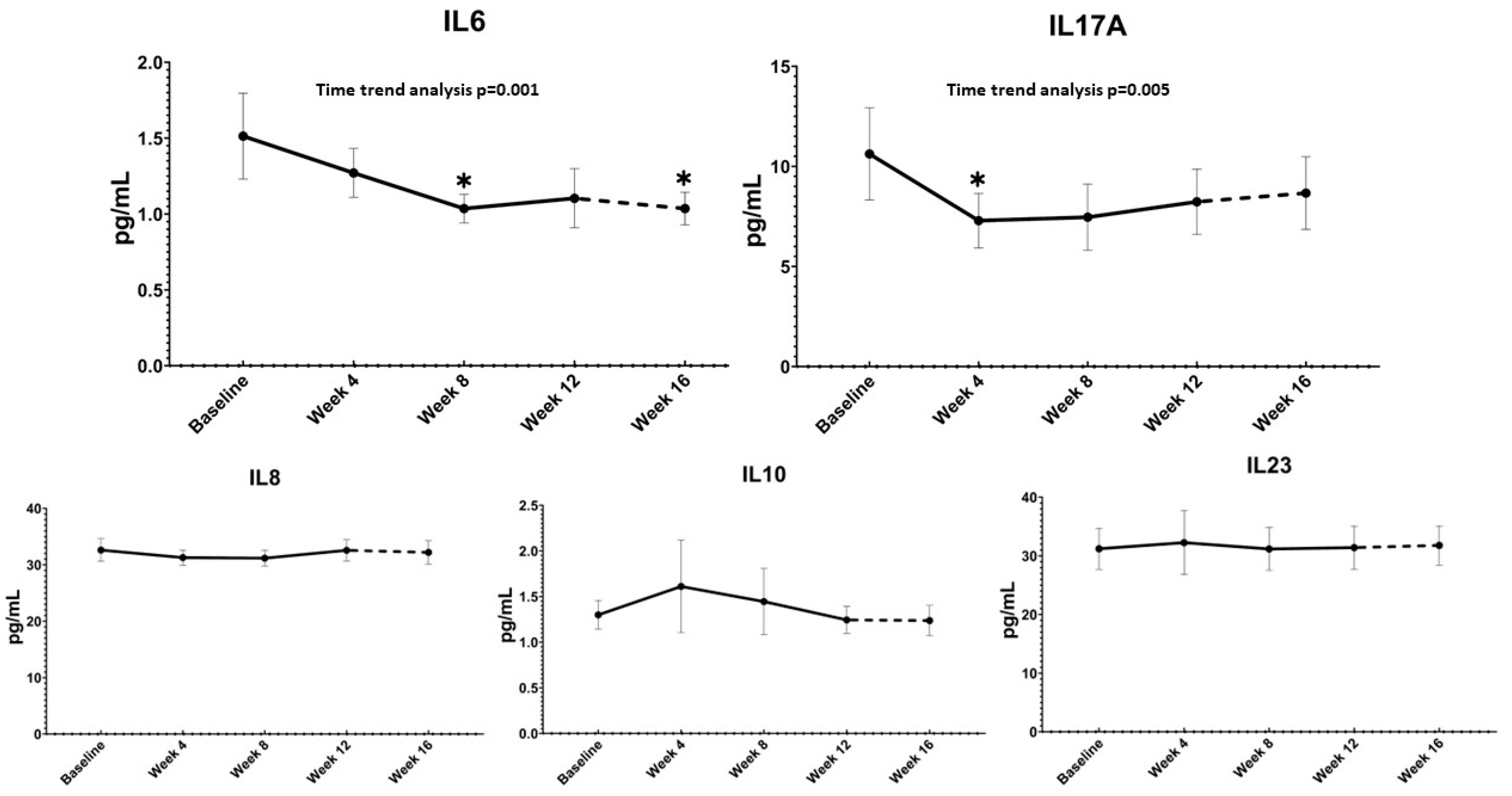